Another instalment of our ‘what if’ campaign to prevent German airborne forces from capturing the island of Crete. In game four, the first attempt by the 2/1st Australians to take the Olive Oil Factory was repulsed after heavy fighting, so HQ deployed some of the scarce armoured resources (a Matilda tank) for the second attempt, however that attack was also repulsed but with heavy German casualties. So the third attack will be pressed home by the newly arrived Commandos of Layforce, preceded by a heavy bombardment (or “Naval Gunfire Support” as it’s known) courtesy of the Royal Navy. Let’s hope the matelots give Jerry a hard time! Surely Dave’s lads must be running low on ammo by now?! 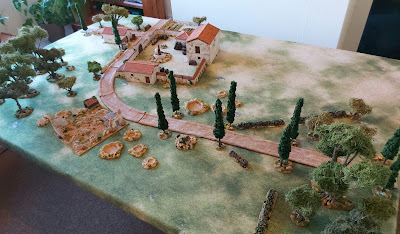 Our initial rolls for Force Morale were Commandos 9 and FJs 8. Was this a sign? Anyway, we agreed that the RN had given the area a pounding with their big guns, leaving Jerry somewhat dazed and confused. The original Von Luck campaign has a Naval Bombardment listed as a support option that effectively shifts the campaign along one whole turn. The Allies certainly wouldn’t want this as it would be playing right in to German hands. Instead, we used a modified version the Werfer Barrage support option - we agreed that on each successive phase the difficulty would ease by one dice pip, representing the Germans gathering their wits as the naval shelling slowed and stopped.
The patrol phase was, as usual, good fun in its own right. Crucially the Commandos were able to push forward on their left flank and keep the FJs out of the rubble of the ruined building. In previous games I’d had to feed troops along the sunken lane which exposed them to German shooting for much longer. Dave’s JOPs were placed in and around the factory compound itself. Again, this seemed appropriate as with fewer men the German leader had pulled his defensive perimeter in to the stout walls. 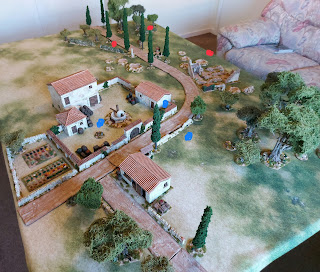 We agreed that the NGS would have destroyed one of the buildings. So here the “house of death” (a nickname earned during the last battle due to all the fierce close quarter’s fighting in/around it) has been blasted to rubble. Plus there are a number of blast craters which may (or may not) provide valuable cover.
Here come the brave Commandos! 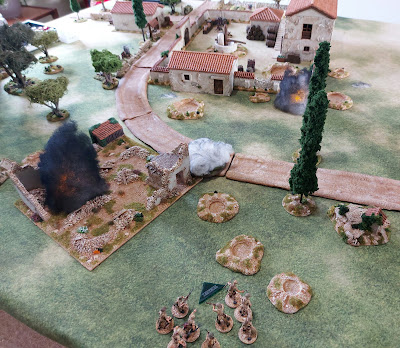 But the barrage was keeping Jerry busy! 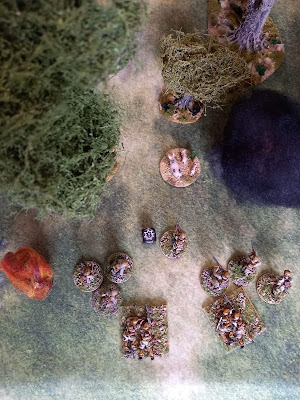 More Commandos join the attack. These were accompanied by the Lieutenant who was definitely the “lead from the front” type! 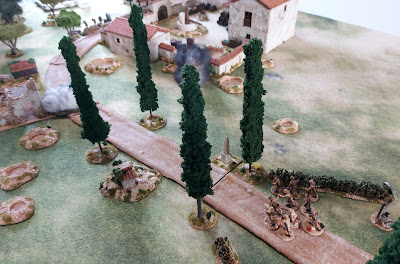 The sub-section led by the Lieutenant dashed forwards, knowing that at any moment the barrage might cease. 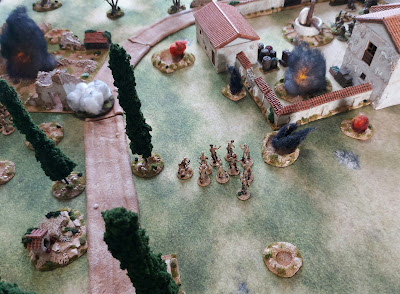 Some FJs have deployed in to the courtyard of the Olive Oil Factory but they’re still struggling to mobilise properly. Meanwhile the Lieutenant’s men have reached one of the buildings, another sub-section have set up a position in the rubble of the destroyed building, whilst a third have deployed. 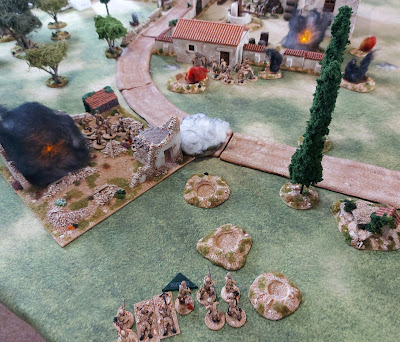 Look! Here are some Germans! 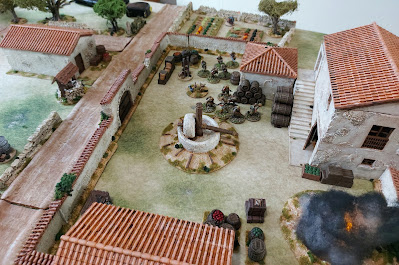 Dave deploys his LG40 team. The Lieutenant has led his men inside the low building. 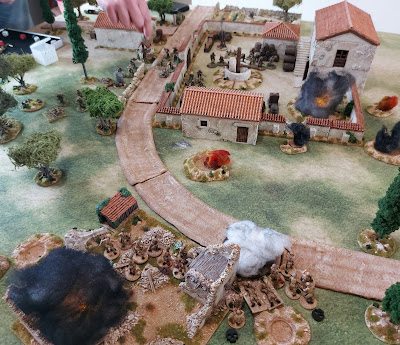 The LG40 hammers the Commandos in the rubble, killing several men and crucially the Sergeant too. 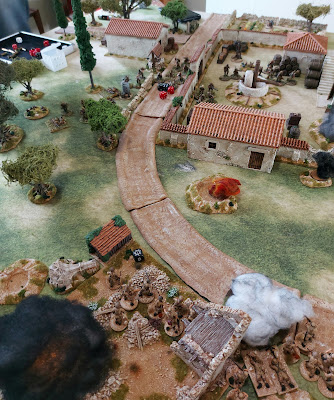 The courtyard becomes the scene of a vicious firefight as a squad of FJs and the Commandos in the store building trade shots. The Commandos are having the best of it though. 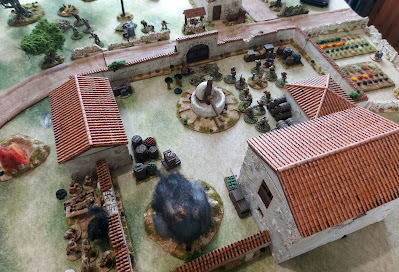 Another group of Commandos pour Bren shots through the tumble down section of wall. 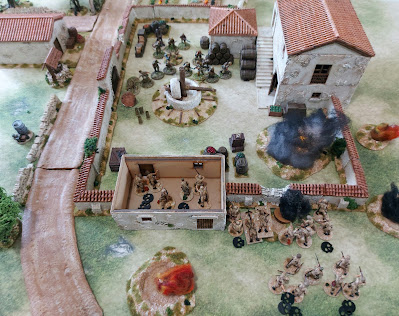 The German JL is wounded and the LG40 team (including its own JL) are badly mauled so FJ morale starts to slide. Indeed, the gun team are broken and the lone crewman has made a run for it. 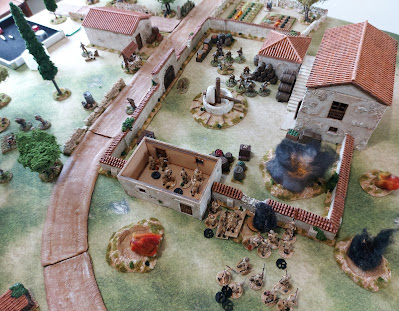 The other FJ squad was on the wooded flank and caused heavy casualties on the group of Commandos without their leader. But the firefight in the courtyard ground on with the FJ squad eventually being wiped out. The German SL moved to bring the remains of the other squad under his control but by this point FJs morale was very low.
In a final hurrah the Commandos and the FJs exchanged grenades over the pantile walls which resulted in the German SL being wounded. Out of ammo and with their leader badly injured, the few brave remaining FJs put their hands up. 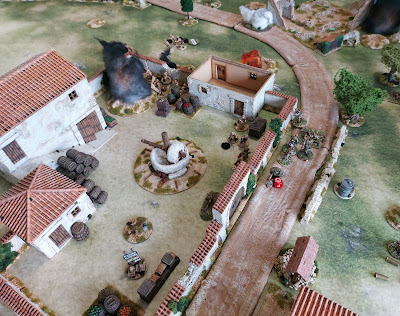 Another thoroughly brilliant chapter in our Crete campaign. My thanks to Dave for a fun game of toy soldiers. I think we were both relieved that we wouldn’t be playing a fourth game at the Olive Oil factory.
So, with their flank and rear secure, the Australians can press the attack on Pervolia. But time is fast running out. Two tables to go and only two campaign turns left. Crete seems to be slipping from the Allies grasp.
Posted by The Wargames Table at 07:57 10 comments:

With the potential to include some Layforce Commandos in our “what if” Crete campaign I initially looked at building a full Commando troop, or at least a couple of sub-sections. Then fiscal prudence intervened! My research concluded that these amazing fellows did not in fact wear power armour and carry bolt guns. Rather, they were equipped in much the same fashion as regular troops albeit in a much more flexible way. So, I decided to use a mix of my regulars and some additional figures built using the extra heads supplied with the Perry sprues, mainly the woolly cap option. Although maybe when the shooting started they switched to metal helmets? I also picked up the Perry SAS Bren teams pack (the figures wearing the keffiyeh/agal will be saved for the desert war).

The Layforce men are quick to make use of Jerry’s kit! 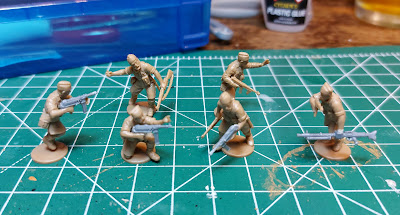 This will give me the “look” I was after without having to acquire lots more figures.
Pinning down a precise TO&E for the Commandos is not easy. There’s quite a bit of info available but it can be contradictory. Plus their organisation changed quite rapidly throughout the war and was also often modified to suit the circumstances, as you might expect for such specialist troops. Anyway, Orange Dave and I have combined forces and settled on the following of 1 Officer and 30 ORs:
Layforce Commandos
HQ
Lieutenant (senior leader) SMG.
2" Mortar (or Boys AT rifle) and three crew
Two Assault sub-sections, each of 9 men
Sergeant/Lance Sergeant (superior junior leader) SMG
Rifle Team
- four Riflemen
LMG Team
- Bren Gun
- three crew
- one rifleman
One Support sub-section:
Sergeant/Lance Sergeant (superior junior leader) SMG
LMG Team
- Bren Gun*
- three crew
- three rifleman
Sniper
Special Rules: Aggressive
Command Dice: 6 (see CoC FAQ)
Force Rating: Elite, +2
*Later Commando forces (‘42 onwards) could replace the support section Bren with a Vickers GO (or “K”), treat as an MG34.
Also the list of supports has the following entry:
List Five, Assault sub-section of 9 men, including SJL, as per main list.
We’re using the TFL British North Africa 40-41 support list as a starting point (minus a few things like most AFVs), then adding in items using the Consolidated Arsenal as we deem fit for a particular scenario.
The Commandos on Crete are reported to have suffered terrible casualties as they made a series of audacious and incredibly brave attacks on German positions whilst providing a defensive screen to allow many thousands of British, Australian and New Zealand soldiers to evacuate from the southern port of Sphakia. Approximately 75% of the Commandos were listed as dead, missing or wounded. Some remained after the island fell, either to help train partisans, or to slip away when an opportunity arose.
Posted by The Wargames Table at 12:28 5 comments:

There’s something so cheerful about Orks! I really enjoyed painting these figures. Here’s Warboss Grimbog and his retinue of Nobz from Da Rusty Fist tribe of the Evil Sunz Clan. 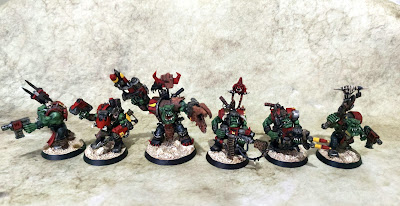 Grimbog and these two Nobz like to get up close and personal hence the power claws and sluggas, etc. The Warboss also has a personalised Kustom Shoota as is right an’ proppa! 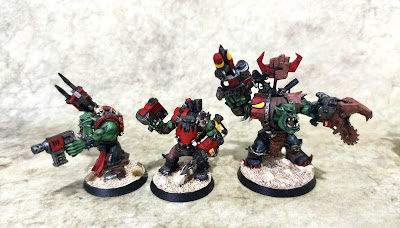 Some of the Nobz prefer extra Dakka (wot Ork don’t eh?) so have Kustom Kombi weapons, mixing shootas with flamers and rokkit launchers. 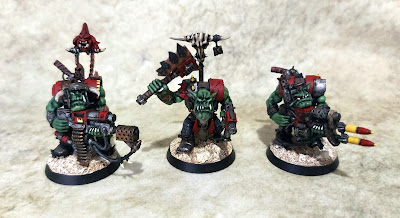 All in all, a pretty fearsome bunch! Thanks for looking 🙂
Posted by The Wargames Table at 07:47 3 comments:

Here he is! Probably the most iconic movie bad guy ever. No Galactic Empire collection is complete without him. 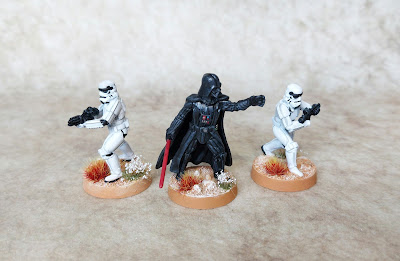 An easy paint scheme but I felt that the big man deserved his own post. Black primer followed by the Foundry Charcoal palette. Some dots of colour for chest and belt. Light sabre in a range of GW reds through to orange. A few other little details in GW Leadbelcher. Some of his armour was given a couple of coats of AP gloss varnish.

Along with the recently completed 74-Z speeder bikes, this brings me to approximately the “standard” 800 points, depending upon equipment options.

However, my AT-ST is primed and ready to paint. So, when complete, I’ll have a few support options to build around the core of Storm Troopers. 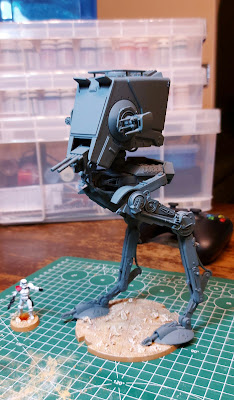 Really excited by this model!

The very useful 1940 handbook for Chain of Command includes a scenario called “Going with a Bang” where the objective is to destroy a pair of culverts in order to delay the advance of the enemy. As published, it is usually played so as to stall the advance of the German blitzkrieg, but there’s no reason why such a scenario shouldn’t apply to other theatres. With this in mind, we intend to apply this to games set in Sicily/Italy where perhaps the Axis forces need to slow the advance of the Allies. So, I’ve knocked up a couple of very simple culverts using some Javis rough stone walling mounted on pieces of MDF. 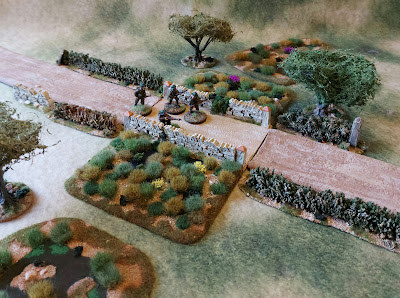 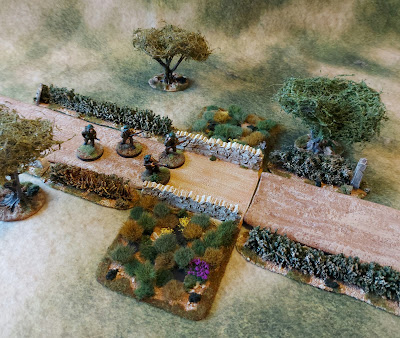 I’ve attempted to give the ground either side of the structure a damp, almost boggy look, using plenty of scenic tufts and clump foliage, with a few patches of open water. The murky water areas are Foundry French Blue shade followed by a wash of Agrax. The rest is my usual Honey/Tan Yellow/Dark Sand/Boneyard basing scheme. The flocked areas are first painted GW Mournfang Brown.
Posted by The Wargames Table at 19:21 4 comments:

The Lord of the Rings Radio Play

I found this in a box recently and thought “Hello old friend!”. Haven’t listened to it for many years so I’m currently really enjoying it whilst I get on with a bit of hobby fun. 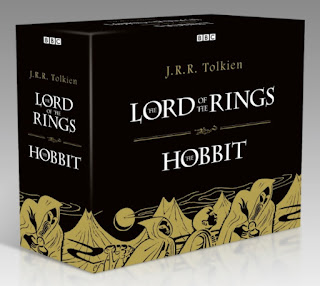 Originally recorded by the BBC in 1981 (though subsequently remastered for better sound quality) it’s a little dated in some ways but I rather think that just adds to the charm. A few of the sound effects definitely remind me of Monty Python!
Anyway, if you like LotR and haven’t listened then I certainly recommend it. Here are a couple of pictures of some of the cast during recording sessions. 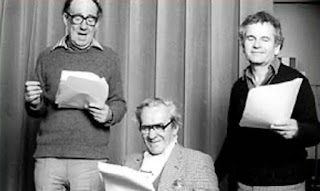 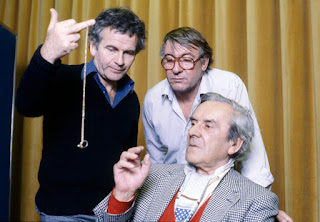 More info here.
Posted by The Wargames Table at 10:03 4 comments:

… wishes you a Merry Christmas! 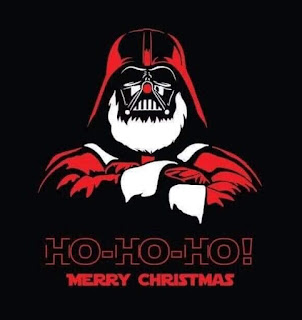 “I find your lack of festivity disturbing”
Posted by The Wargames Table at 09:00 5 comments: