No, not exploding broccoli ... it's one of Orange Dave's new blast markers! Having seen mine, Dave asked if I could make some for him. These will initially be featuring in games of Great War action. 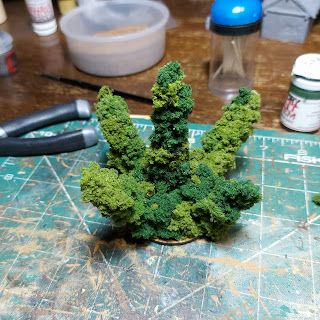 Three smoke "blasts". A couple of sprays of grey primer, followed by a couple of pure white. 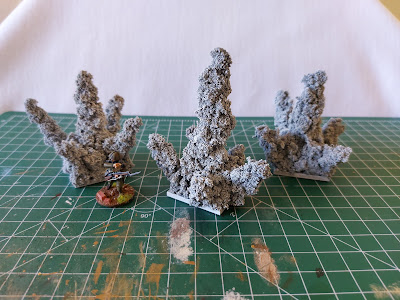 Three explosion "blasts". A couple of sprays of black primer, followed by a light spray of grey. 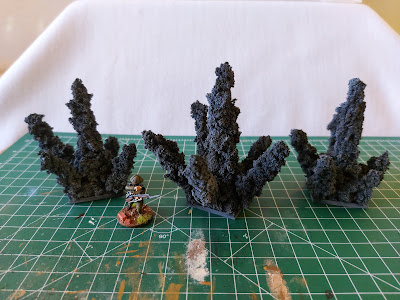 One poison gas "blast". Spray as smoke the hightlight with some green. 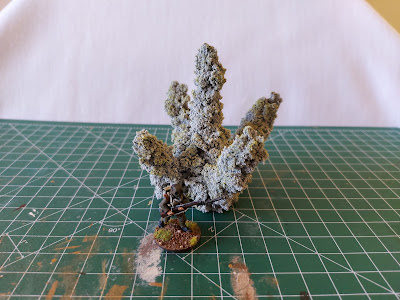 This pic might show the green-ish hue of the smoke a bit better. Simply a quick drybrush with Foundry Phlegm Green light. 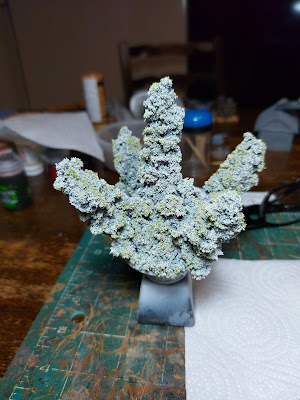 These are the armatures on to which I stick the Woodland Scenics foam, using smelly all purpose glue from (UK) Bostik or Uhu. MDF bases with holes drilled for kebab or cocktail sticks. 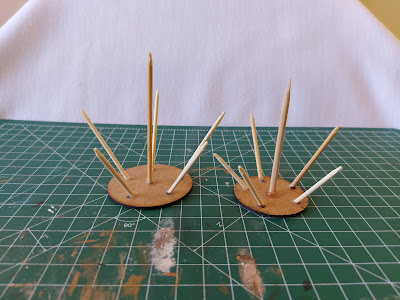 A trick to help make them slight more durable is to prime the foam with very thin PVA before spraying. Make sure you allow plenty of drying time tho. Thanks for looking!

I hope to be running some intro games for potential new recruits to Sharp Practice soon and I thought these would help avoid any confusion as to which card represents which leader. Designed and manufactured by top chum Colin of Charlie Foxtrot Models. 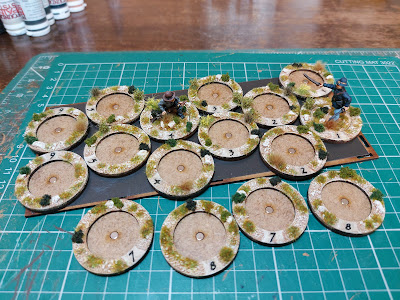 All of my Leaders are based on 2p coins, so the 4mm magnet will hold them quite firmly. After my usual basing recipe (Americana Honey Brown, VMC Tan Yellow, VMC Dark Sand and Foundry Boneyard light) I picked out the numbers in thinned black just to help make them clearer.

To complement the set I made for my Union forces (and as a rest from all the Mediterranean goings on) here are some casualty/shock markers for the Confederates. 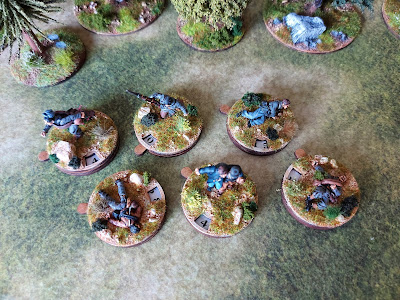 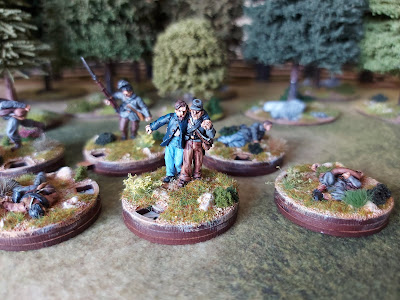 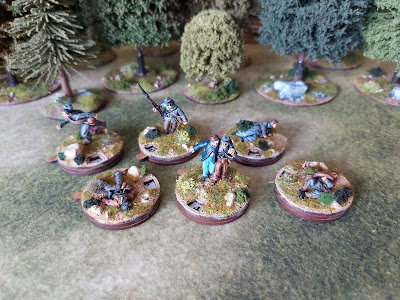 All metal Perry figures.
Posted by The Wargames Table at 15:34 6 comments:

Game four of our exciting "Kampfgruppe von Crete" Campaign sees some of the Australians of  2/1st Battalion diverting from the main attack on Pervolia to tackle a German force holed up in an Olive Oil factory.

I got a hefty 13 points of support for this battle and was very tempted to bring along either the Matilda or the MkVI again, but as this action was initially considered to be a sideshow to the main performance, I felt that the scarce armoured resources should be unavailable, at least to begin with. This seemed to fit the narrative best.
So my choices were: Additional section of regulars with JL,Vickers MMG & emplacement, Universal Carrier with Bren Team & JL and Crafty Cretans - Stavros the elderly sniper. Dave chose an LG40 recoiless gun & JL. We kept our choices secret as that seems more fun.
Morale: I rolled a measly 8 whereas Dave edged ahead with 9. Clearly my Aussies were disappointed to be missing out on the advance to Pervolia!
Here's the situation at the end of the Patrol Phase, before deploying the Jump Off Points (JOPs). I'd been lucky to roll a 5 for my free moves so the Aussies were well along the sunken lane before patrolling really began. 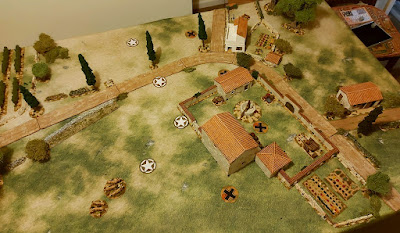 And here's Dave demonstrating the use of two lasers, lol. He seemed to enjoy this quite a bit! 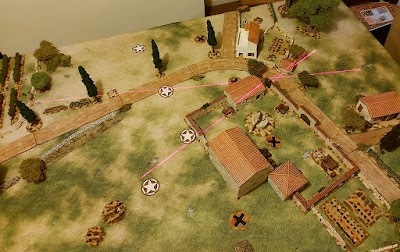 The results were Dave having one of his JOPs near the house with a balcony, whilst the other two were in or near the factory itself. I had one well along the sunken lane near the obelisk monument, one on the table edge by the vineyards and the last was amongst the trees adjacent to the road.
The early turns were quite cagey for both sides. I began by deploying Stavros who, despite his advanced years, was very keen to shoot a few Germans... if only he'd brought his glasses too!

Dave muttered something about "Stavros' village" and "swift retribution" ... steady on mate! Anyway, by now Dave had a squad in the balcony house and another in the factory yard. So, before he could bring their guns to bear I determined to launch a diversionary attack on his left flank. I'd rolled two sixes so would have at least two turns to move them across the open fields between the JOP in the lane and factory buildings. At the last moment I decided to have the brave section accompanied by the Platoon Sergeant. I reasoned he'd be able to help out with shock managment and thus keep the lads moving. The aim was to try to tie up as many Germans as possible so I could launch the main attack along the sunken lane, led by the Bren Carrier. 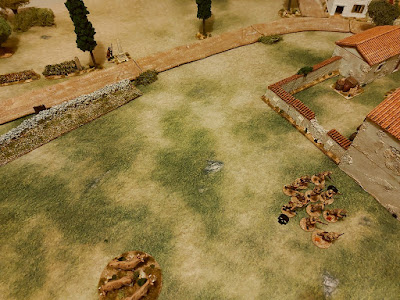 However, the vagaries of the command dice meant that Dave was able to get an MG34 team to the upstairs window ... Dakka-dakka-dakka!! Spotting the danger, Sergeant Jones warned his men who dived for cover, but the brave NCO was riddled with bullets. That also took off two points of morale, ouch! 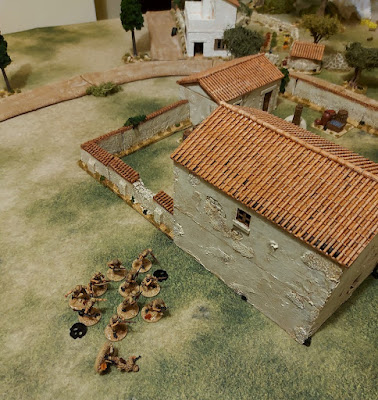 Here they are ... the beastly Boches! 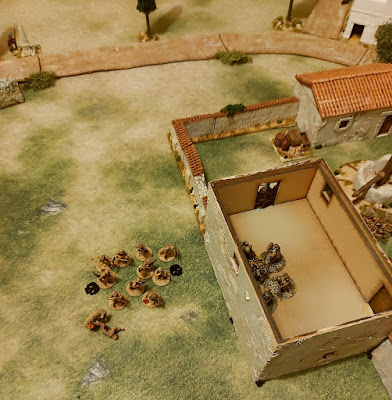 I was tempted to try for a grenade or two through that little window, but then remembered these chaps were a diversionary force so pushed them on around the corner, led by their brave corporal. Here you can see two FJ squads are now holding the factory yard and their attention is firmly focussed on the advancing Australians. 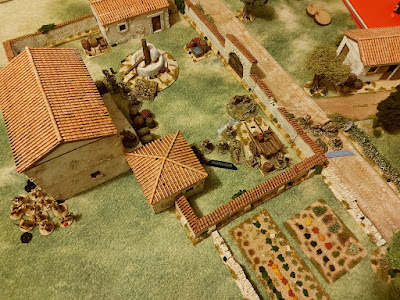 Time to get the main attack going! Brmm, brmm! Here comes the Universal Carrier. Stavros has been doggedly potting away at the FJs and inflicting shock but not any actual kills. 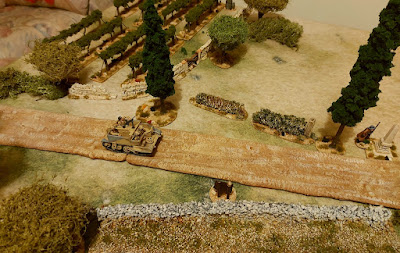 This more like it. Deploying from the JOP in the lane (the signpost vignette) a section follows the UC so as to gain some cover. Being at the end of the sunken we decided the UC was in a 'hull down' position and could let rip with its Bren. The FJs in the balcony house were coming under instense fire but very few kills were inflicted as 5's and 6's were proving elusive. 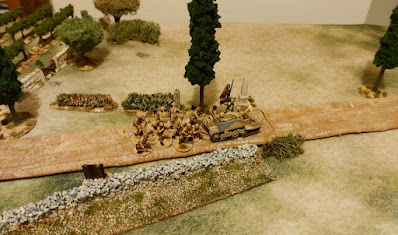 To help tip the balance in favour of the Allies, an emplaced Vickers deploys from the vineyard and pours a hail of bullets in to the balcony house. The FJs started falling and Dave attempted to pull them back. That should make the advance somewhat easier. 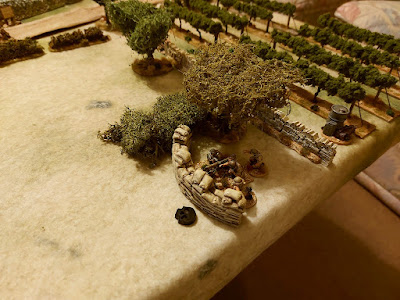 BOOM!! "What the ruddy hell was that?!" A shell narrowly misses the UC, carving a hole in the dusty road. 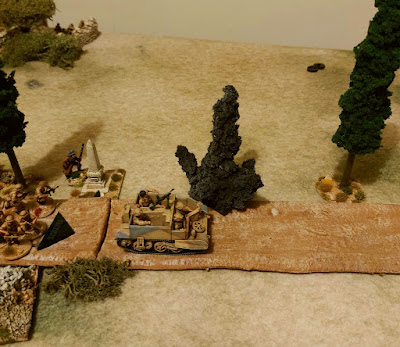 Dave reveals his support option. The (soon to be dreaded) LG40 team trample the veg garden to deploy with an excellent line of sight along the lane. By the way, the small shell casing in the road is one of Dave's shock markers for one of the teams in the house. 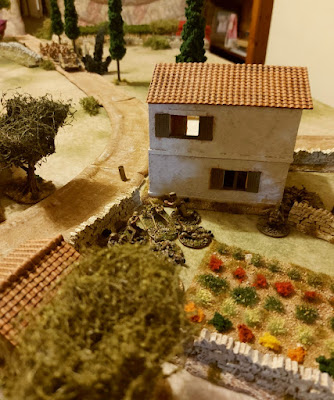 Meanwhile, over at the olive oil yard, the troops happily exchange grenades. However the Australians got the worst of it by far. Corporal Deacon heroically caught a German grenade mid-air but as he attempted to hurl it back, it detonated ... blowing him to smithereens. Another point off my morale, down to 5 points now, eeek! 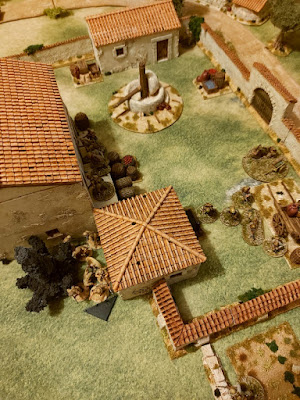 A second shot from the LG40 misses entirely so the UC pushes on to allow the infantry to follow behind. A third shot also misses. The fourth hits but amazingly the little vehicle suffers nothing more than scratched paintwork! By George ... that's more jam than a whole tin of Robertsons! 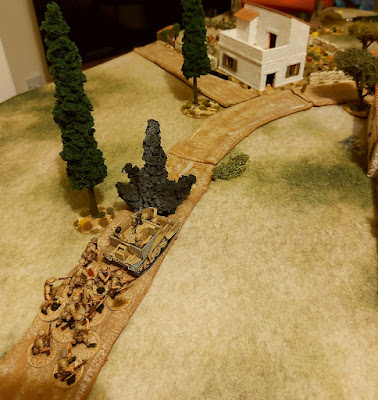 Sensing an opportunity, Dave's FJs resume occupation of the balcony house and get some shock on to the Vickers near the vineyard. I also had a feeling the decisive moment of the battle was fast aproaching so brought up another section behind the UC. Stavros kept up a steady stream of invective along with some shooting from his aged fowling piece, but for no result. 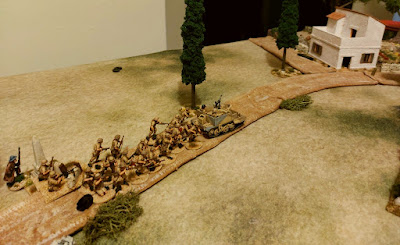 As the shock was mounting on the Vickers team (no casualties tho!) I deployed my Lieutenant in to the vineyard to help bring things back on to an even keel. Here he is looking reassuringly calm with a pipe full of best rough shag and a large mug of hot tea.

Dave's LG40 team finally got their collective eye in and a 7.5cm shell tore though the little tracked vehicle. Amazingly the crew were shaken but unhurt and immediately de-bussed on to the road. 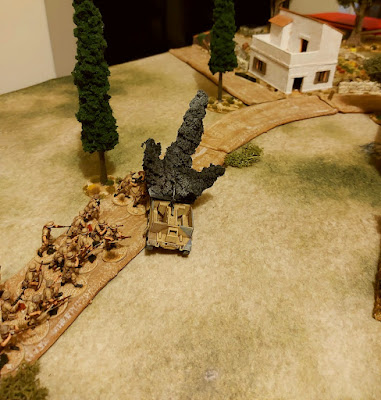 The sections both made a break for it and ran pell mell for the olive oil factory yard. It would be a fierce tussle but there was no other option. However, the moment of decision had come ... the balcony house was by now crammed full of FJs and they began by concentrating the firepower of two MG34's on the Bren team in the road. Both the team and their JL were shredded. The loss of the UC support option caused a 2 point drop in morale, from 5 to 3, and the loss of the accompanying JL inflicted a further 2 points, from 3 to 1. So we called it there! 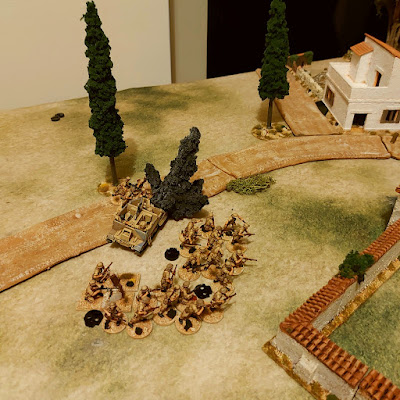 Yes, Dave's FJs had held the factory. This was all very historical as the initial attacks were repulsed after heavy fighting. Eventually the armour was called in to help dislodge the stubborn foe. As with the earlier games, the butcher's bill was relatively low although the FJs had the best of it. Anyway, another absolutely cracking game of Chain of Command with good chum Orange Dave. Thanks matey!
Posted by The Wargames Table at 12:49 14 comments: