Squeezed in a bit of Early War Chain of Command with good friend George, continuing our Gembloux Gap pint sized campaign.  For various reasons this series of games, started back in the late Summer, had stalled, so it was great to get things going again!  After breaching the front line at Perbais, George’s Germans squeaked a very close win at Noirmont.  The next phase of the campaign sees my brave French trying to stem the German tide at Villeroux.  Here’s the map of the table from the PSC (copyright TFL, no infringement intended). 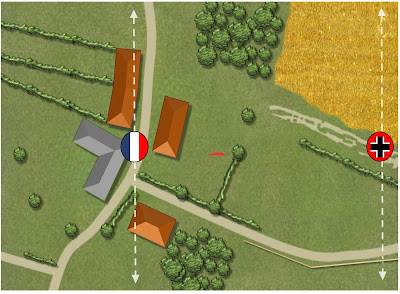 George kindly hosted the game in his spacious and well equipped gaming room — which is also technically the local post office, where George greets his valued customers with a cheery smile and a jolly wave.
Anyway… we played the game using the now familiar-to-many means of zoom and FB messenger with a wide battlefield view and a roving mini-tripod mounted camera.  I plumbed the laptop into my TV for a better view. 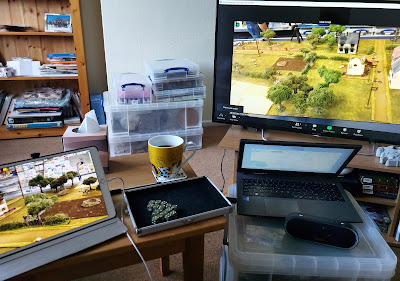 Now, I don’t have any in-game pics (tho George will) but highlights were:
There were plenty more moments of action and drama, but the continued pressure from the ferocious Germans meant that the French were eventually forced to sound the retreat to the rear.  George’s relentless propaganda machine has provided an AAR here.
A great game with lots of laughs!  My thanks again to George for going to all the effort of hosting.  It’s worth noting that George is very well looked after by his smashing missus Evelyn, who brings him regular and plentiful supplies of coffee and sandwiches!  This was, I think, a major boost to his strategic plans 😉
Posted by The Wargames Table at 19:45

Good see you got in a CoC game with Veteran CoCer, George.

Valued customers, you joker you. Good game and chance to chat, I did enjoy the sarnies!

A grand game there, good to see the campaign getting up dream again. A bad day at the office for the French, but it's not over till the grande chanteuse sings.

Thanks! Yes indeed Phil, we'll fight to the last poilu

Just checked out the excellent game report on George's blog. Following closely as I have this PSC in the pipeline.

Yes, George's report is ace. It's a good PSC but very tough for the French.