This is the "Patrol on the hill top" battle, game one, table one. Overnight on the 20th May the Germans have gathered men and equipment from their scattered drops, consolidated their position and pushed pickets out to warn of the expected counter-attack by Allied forces. As the sun rises on the 21st May, forward elements of the 2/1st Australians advance through olive groves looking for their German paratrooper adversaries. 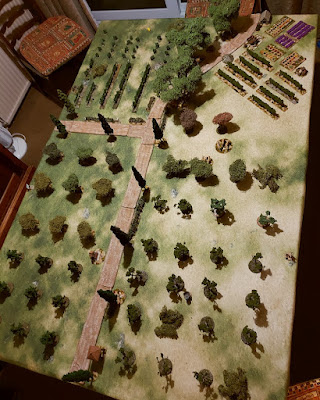 Whilst this table is covered in olive groves and vineyards we decided that, in keeping with the original 'Von Luck' campaign, the sparsely planted trees and vines would count as soft cover across the table. The pic below shows the result of the Patrol Phase. Dave has pushed his paras forward on the flank but held his other Jump Off Points back a little. I pushed forward as far as I can but ended up with a JOP on each flank and one further back in the middle. My plan was to push forward hard and fast in an attempt to overwhelm his position. My support options were a Vickers and an Adjutant as I wanted to get everything on table fast, plus have some powerful fire support. Dave rolled for his para team's dispersed drop and was effectively missing a whole squad. I felt pretty confident at this point ... 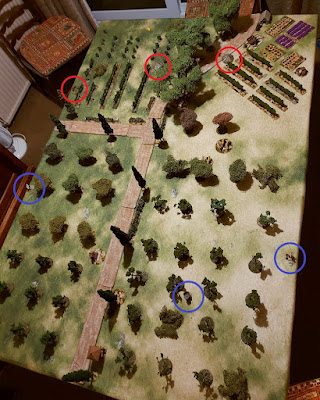 Here's a couple of pics of the view from the German lines. Dave has a pair of JOPs made from Zeltbahn (Debris of War) and one using comms equipped soldiers from Perry Miniatures. 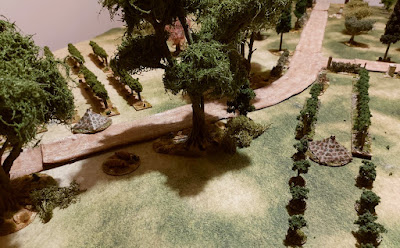 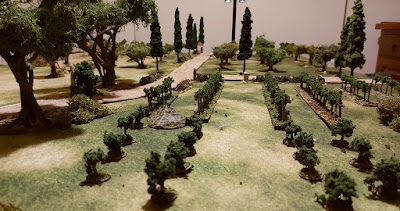 Dave opened matters with a series of double turns that allowed him to establish a line of chaps behind the sparse hedgrows. Fearing that one of my flank JOPs might be captured I deployed men to start giving Jerry what for! 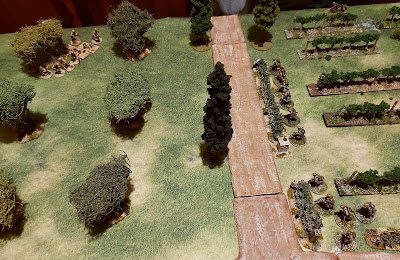 However, another string of double turns for the FJs meant that Dave was able to concentrate a horrible amount of firepower against the second section I brought in to the fray. It produced a dreadful amount of shock! 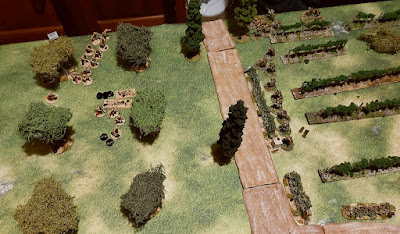 The Platoon Seargeant comes forward to help manage the mounting pressure on the hapless section, particularly as the section leader was wounded.

Allied shooting proved to be rather less than effective and the FJs made the most of it by concentrating the firepower of three MG34 teams on the already battered section. We use a house rule whereby units can only fire once if the player gets consecutive turns. Even so, the wounded corporal (Junior Leader) was cut to pieces, several men fell and more shock was applied. The result was that the section broke and ran for safety. In total the exhcange cost my lads five points of morale (-1 for the wounded JL, -2 for the JL when he later died, -2 for the section breaking) 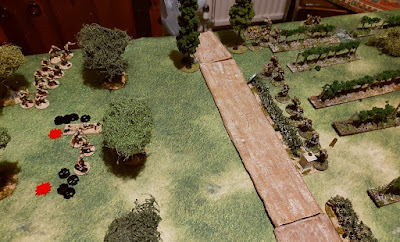 That was quite enough for my brave lads. The Lieutenant sounded the retreat and the withdrawal was successful. The butcher's bill was relatively light with only a handful of casualties on each side but I'm sure Lt. Col. Ian Campbell will not be pleased!

Posted by The Wargames Table at 18:49

A fine looking table and game, I look forward to following the campaign as it develops.

Excellent table set up and a cracking good start to the campaign.

Thanks! Certainly good for Dave's lads 😂

A great opening game for this campaign. Super terrain and figures; I especially liked the low down photo looking across the table.
Regards, James

Thank you! I'll be sure to take a few more shots like that.