That’s 78 miniatures for only £36 and is enough to enable me to build a very respectable force for SP2, with some models to spare, although I’ll add a few metal command figures too.  I already have the Perry artillery boxed set which has 3 cannons.  One was built for my Confederate force, another allocated for the Union, but I’m not sure what to do with the third? 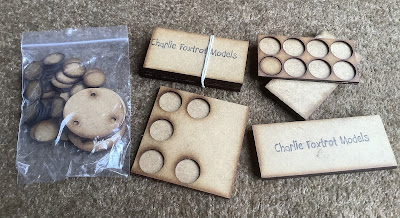 Here they are primed and based (foliage, grass, etc is added after the varnish).

For a total of 95 points which nicely matches my Confederate force.

Posted by The Wargames Table at 07:22

Some fine retail therapy there Matt

Indeed Phil, and all at a bargain price too! 😂
Cheers
Matt

It’s a very tempting period and those Perry sets make it so easy to get started. Perhaps more than anything the thought of painting that many figures is a lot less daunting than doing the same number of Napoleonic uniforms!

Absolutely! Naps are fab but the uniforms can be quite a challenge