Another group of eight regulars including a flag bearer and a drummer plus a Sergeant to assist the officer. 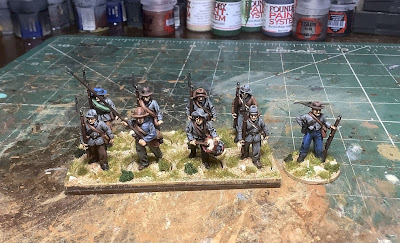 My mate George has kindly drawn up some flags (thanks again) so when I can get my printer fixed, I’ll add something to the flag pole! 😂  Anyway, this gives me a ‘unit’ of four groups as the core of my Confederate force.

Still to be added are some more militia and an artillery piece (both of which are in progress) plus another unit of skirmishers.  I’ll add some cavalry, dismounted cavalry and horse holders later.

Posted by The Wargames Table at 10:00

Nice work Matt, like the look of the them in formation.
cheers John

A fine body of Sesesch Matt.

Lovely work Matt. I will look forward to you removing them from the table and recoiling from my Yankees late this year.

These are inspiring, let's hope your dice rolls do them justice. :)

Thanks mate. Your blog is a mine of information and inspiration! Do you think you could add a "search" widget 😉😂
Cheers
Matt