One of the many fab things about Ork kits is that they come with heaps of spares and extras, including a number of different torso options.  So I decided to pick up some extra "legs" so as to make a few more Orks - can never have too many! 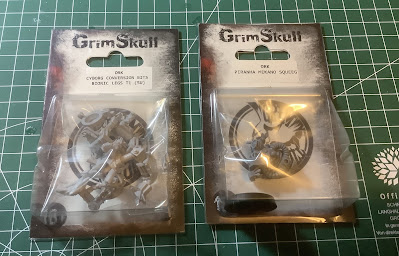 These items are from Wargames Exclusive.  The legs are in fact "cyborg" legs built in a suitably Orky fashion.  The mechanical "squig" will either accompany my Mek-boy or I may use it on a vehicle as a battering ram perhaps?  Anyway, the resin is superbly cast with virtually no mould lines and minimal flash. 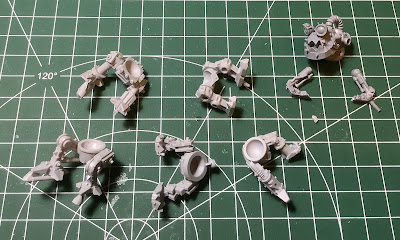 The pic above shows them fresh from the blisters.

Here are my extra Boyz.  I built a couple more heavy weapons - a Big Shoota and a Rokkit Launcher - as you can always use more Dakka!  Two of the others have Kustom Sluggas - a Burna and a mini Rokkit Launcher - whilst the fifth figure has two Choppas.  I tend to build the figures however I prefer then when playing they can "count as".  Anyway, the idea of uniformity is meaningless to Orks!

A better view of the bionic legs. 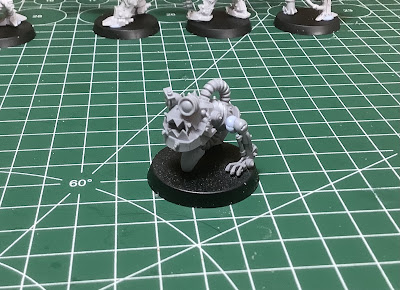 And here's the mechanical squig - just blu-tak-ed for now until I decide what to do with it.

There's quite a range of additional Ork (and other races) stuff available, especially characterful one-off figures so I hope to order some more in the future.

Posted by The Wargames Table at 14:08 No comments: