Perusing the bits box the other day I found this lovely greenhouse kit from Warbases.  I wanted to build it as part of it's own little scene rather than a free-standing building on the table, so I dug out various bits of scenic scatter or 'clutter' to add to it. 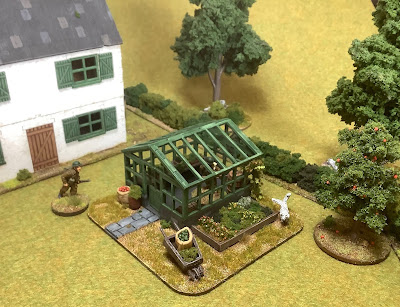 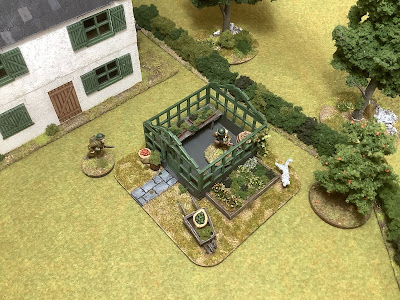 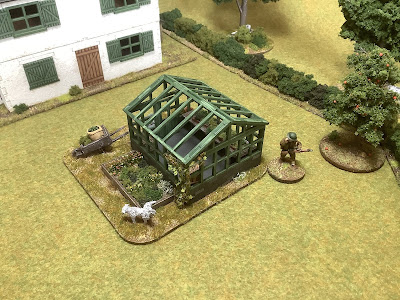 Rather than have an empty greenhouse I scratch built a potting table from coffee stirrers and found some other bits of resin (Debris of War) to fill the space.  I've not glued the roof panels in place as I want to be able to place figures inside, although you can't get too many figures in it! 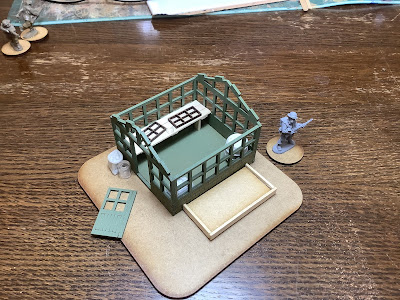 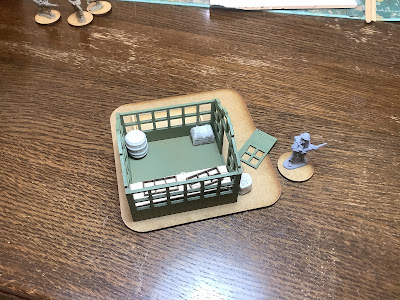 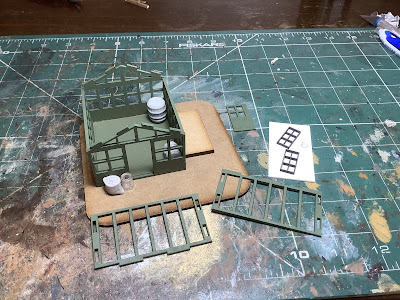 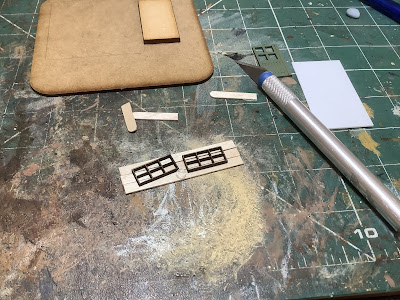 Outside is a small raised bed and some more DoW resin clutter.  The plant pot by the door is a cylindrical lego brick.  The planter trays are window frames.  Base from Charlie Foxtrot. 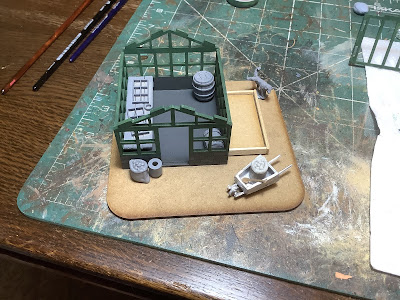 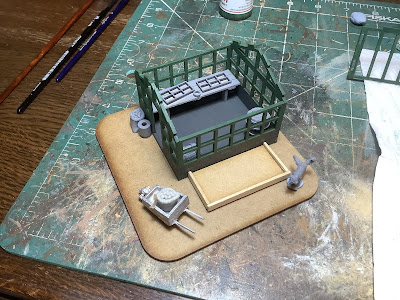 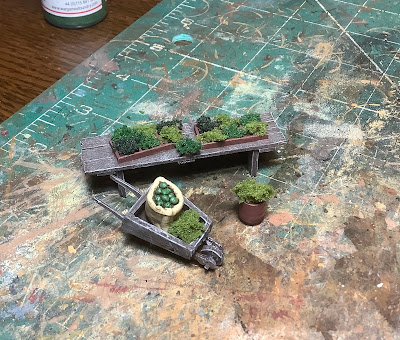 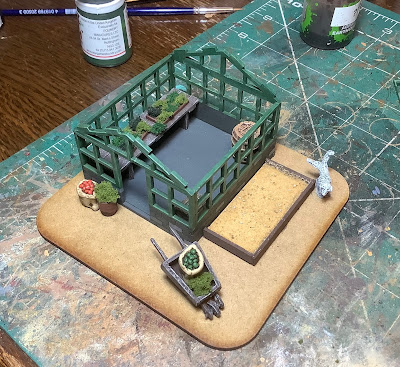 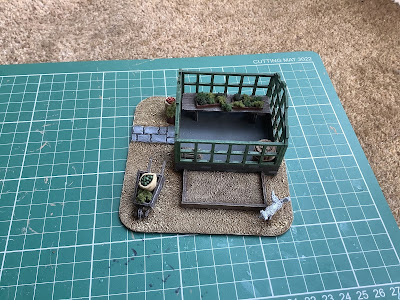 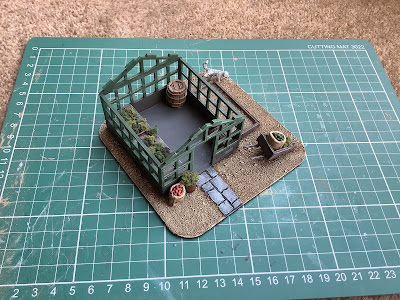 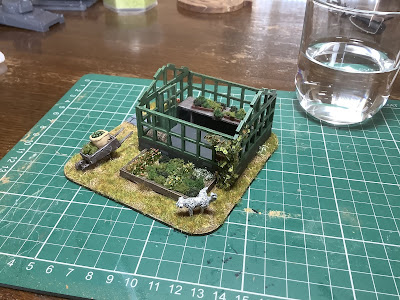 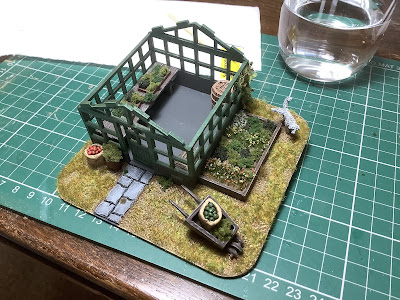 Painting was quite simple: spray with AP army green primer, then paint the wooden frame in Foundry Forest Green, the bricks in Foundry Slate Grey or Stone then give it a wash with Agrax to make it look a bit weathered. Highlight with the base colours then one shade lighter.  Pick out a few extra bricks in different shades of grey.

The path is made from some small pieces of plasti-card.  I've trimmed the edges so as to look like stone slabs.  The earth was painted with VMC Flat Earth, followed by highlights of Gold Brown, Tan Yellow and Dark Sand.

Adding all the foliage really brought the piece to life I think.   There are a wide range of tufts, scatter, clump foliage, static grass, etc available and I just kept adding it until I was happy with the result.
Posted by The Wargames Table at 09:34 9 comments:

Bit of a 'filler' post today as I've been somewhat distracted of late!  I wanted an alternative to the usual "door mat" style wheat fields and these have been in the scenery bits box for some time.  A few were already painted but I didn't know the painting recipe, so a clean up with soap and water followed by a spray of AP Skeleton Bone soon had them all primed and ready to go. 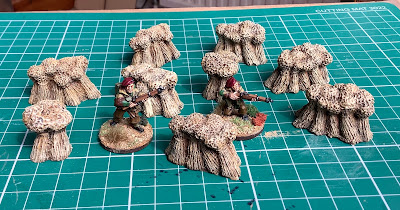 These fine resin items are from Hovels Ltd. The paint recipe was simply:
Think I might get another couple of packs.  I'm not sure if I'll leave them as is, base them individually or make a partially cut wheat field for them to inhabit.  Probably base them on some of the very reasonably priced Charlie Foxtrot oval bases.
Posted by The Wargames Table at 09:58 5 comments:

My good friend George recently invited me to take part in a marvellous naval campaign set at the outbreak of WW1.  I've never taken part in anything like this before so I jumped at the chance!  My role was that of Admiral Souchon, the commander of a small German fleet stationed in the Mediterranean.  My mission was to (a) disrupt the French as they brought troops back from North Africa in preparation for the European war, and then (b) deliver the ships to Turkey at Constantinople as per a secret pact of mutual support.  Two other players (Simon and Rob) would be taking the role of Britian and France.

My flagship was the battlecruiser SMS Goeben, shown here. 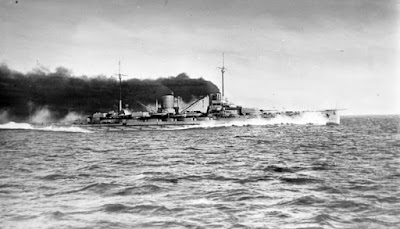 George acted as the umpire, giving reports and map updates as the hours and days passed.  The players would then give orders, course heading, speed, orders for sighting the enemy, etc.  I opened the action by sailing for North Africa with the intent of shelling the ports and sinking whatever ships were being readied for troop transport.  A "geographical mix up" nearly saw me shelling Bizerta (Tunisia, not Algiers), but thankfully a sharp eyed officer got us back on track.  Sailing along the coast we inflicted plenty of damage before heading for Messina, Siciliy for re-coaling.  By then Germany was at war with Great Britain so I knew the Royal Navy would be hunting for me in deadly earnest rather than just trying to keep a watchful eye.  With significantly more ships available to the RN ... Constantinople and victory beckoned!  However, during the night we encountered enemy ships on patrol.  With only vague intel available George offered me the choice of turning back and trying to sail around or going for it and blasting our way past the RN.  Of course I chose the latter and battle followed. 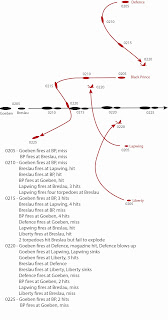 Whilst my ships sustained some damage, they fought brilliantly sinking three armoured cruisers before the RN disengaged.  With that my valiant Kriegsmarine headed for their rendezvous with the Turks and some well earned shore leave amidst the bars and flesh pots of Constantinople.

All the details can be found on George's blog, here.

My thanks to George for creating and running a splendid campaign, and thanks also to Simon and Rob for joining in the fun.
Posted by The Wargames Table at 13:47 2 comments: