Inspired by George over at "Musings on Wargaming and Life" I'm taking a brief look back over 2019 from a gaming perspective...

It's certainly been quite a varied year of painting & modelling projects!  World War 2 has been the front runner with my DAK army getting ever larger.  Plenty of new additions for my desert terrain too.  Really enjoying this project.  Plus I dipped my toe in to Eastern Front gaming by starting to pick up a few figures for a Russian army.  Some of my "French/Belgian" scenery got a bit of a makeover and several new buildings were added.  I have quite a lot of scenery for this theatre but it's still good to keep adding more; Colin at Charlie Foxtrot keeps me well supplied with kits.  Also, my existing WW2 forces (Paras, Panzergrenadiers and British Regulars) all got a few bits and bobs - no army is ever truly complete!

I briefly dallied with Warlords of Erewhon but after a couple of games I decided that it wasn't my thing.  Pity really as I have a large Middle Earth collection of Uruks, Orcs, Goblins and Trolls that enjoy the taste of man-flesh.

Almost from out of nowhere Warhammer 40K appeared on my painting table.  (Thanks Rob 🤣).  It gave a wonderful sense of nostalgia and I really enjoyed building and painting the figures.  It's definitely something that I'll continue with but probably more of a background project.

Sharp Practice continues to inspire so there were further additions to my Napoleonic collection with both Rifles and Redcoats joining the ranks.  The Front Rank figures are beautiful sculpts.  A few scenic items were added too.

Like previous years I was lucky enough to help out at a few shows too.  Always a pleasure to chat to a wide range gamers about their projects plus help them invest in finely crafted MDF kits.  It’s also good to chew the fat with chums amongst the traders.

As for gaming there were Bolt Action campaigns in the desert, Chain of Command in Normandy and several excellent Sharp Practice weekends with old (and new) friends.  As I get my house more 'sorted' I aim to host more gaming weekends with friends as these are always a jolly good laugh.  One thing I learned this year was to not worry about blogging too many of these games simply because it allows me to focus on the games themselves rather than faff about taking pics and jotting notes.  Also, writing up lots of battle reports is quite time consuming and that's time I'd rather spend painting.

As for the gaming year ahead ... well, more of the same I expect!  I'd like to get my Desert Rats completed as then I'll be able to put on games of either BA or CoC and supply both sides - being a GM is always good fun and allows for more complex scenarios.  The scenery collection will definitely continue to grow as I work towards building a more extensive village/town collection. However, my desert terrain will need attention as I hope to add some adobe buildings, rocky outcrops, scatter items, livestock, etc.  I’d like to broaden the scope of this to include Sicily and Italy.  Then there’s the Eastern Front!  But it’s not all WW2... there’s the forthcoming TFL offering of “Infamy! Infamy!” or maybe Osprey’s “Lion Rampant”?

I'll just have to see where my wargaming butterfly takes me 😊

Happy New Year!
Posted by The Wargames Table at 05:32 7 comments:

The first of my 8th army roll off the production line.  That’s really how I view this painting project; a production line.  But in a good sense, as it’s quite enjoyable.  Here are a light mortar team, a medical orderly and a junior leader. 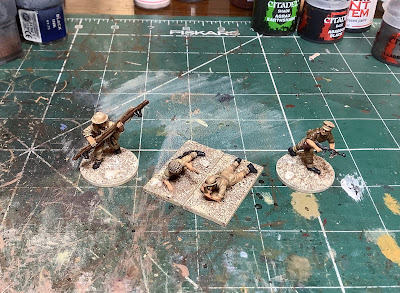 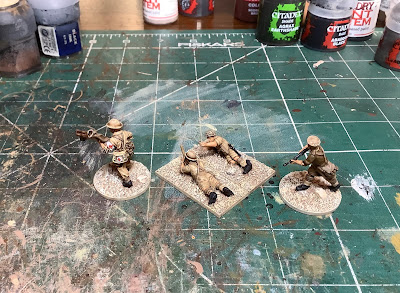 These first figures are really a ‘test’ in that I’m figuring out which colours to use for the various items of uniform and kit.
They are very much painted in the “three foot away on a nice gaming table” style 😉 and I’m very happy with that.

Wash with Agrax Earthshade, then highlight with original colours.  Webbing can be painted in Iraqi Sand when doing shirts then just picked out with Dark Sand or even Foundry Boneyard light.  Variety is key as new recruits arrive with regulation kit whereas veterans have weather worn gear plus items that have been “customised”, acquired from the enemy, etc.

So that’s my first lot of figures for the painting challenge.  Plenty more to go though.

Merry Christmas everyone!
Posted by The Wargames Table at 10:27 8 comments:

It’s that time of year again... 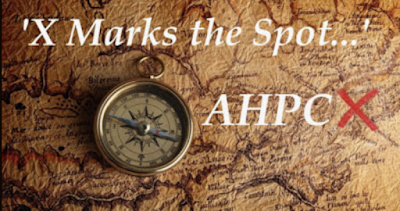 Here are my 8th army figures ready for painting as part of my unofficial entry in to the 10th Analogue Hobbies Painting Challenge!  I’ve set myself a very modest target of 250 points. 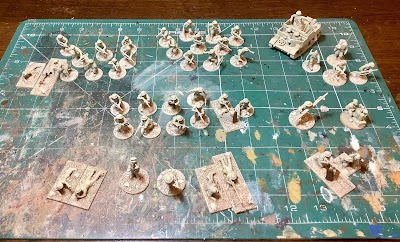 This consists of
This is a basic platoon for Chain of Command.  Most of the figures are Perry along with a Warlord command pack. For support there is
The figures were prepped recently and I’ve just completed the basic groundwork.  I also have an AT gun and some armour waiting in the wings.
Posted by The Wargames Table at 19:09 6 comments:

Allies Slip Up in Marj-Areen

Good chum Mike and I got together for a long overdue game of Chain of Command in the North African desert.  It's December 1941 and Rommel's men are cunningly withdrawing before the onslaught of Operation Crusader.  With Allied supply lines being stretched thin, the Germans decide to make a stand at the abandoned village of Marj-Areen ...

Mike kindly set up a table before my arrival, and then produced a delicious pizza, artisan bread and plenty of tea before we set to.  Here's the table after the patrol phase. 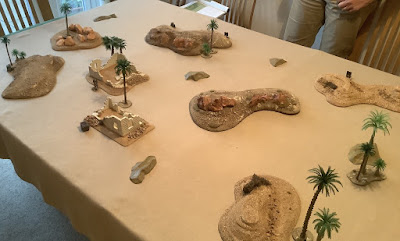 I have JOPs behind the two ruined buildings and the hill on the far left, whilst Mike has JOPs behind the two hills nearest his baseline.  I was impressed by the rugged sandy hills on Mike's table, covered in rocks both large and small.  When many people think of the desert they think of endless sand but much of the North African desert is rather different.  Mike has been there (following in the footsteps of his Dad) and it's very rugged terrain as these photos will show.

Right, on to the game; it's scenario 3 Attack & Defend.  I had 5 points of support and Mike had 8.  He opted for a Crusader and a Sniper team whereas I took a second Senior Leader, an AT Rifle team and entrenchments (for the AT rifle).  I was tempted to blow all 5 points on a Panzer III but the second SL proved a sound investment.

Mike began by bringing on a few teams which I countered by making a strong central fire-base amongst the buildings. 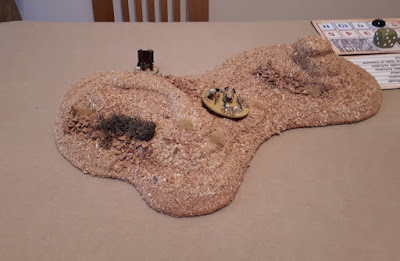 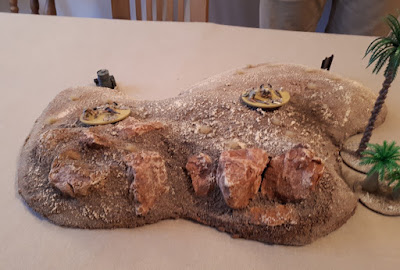 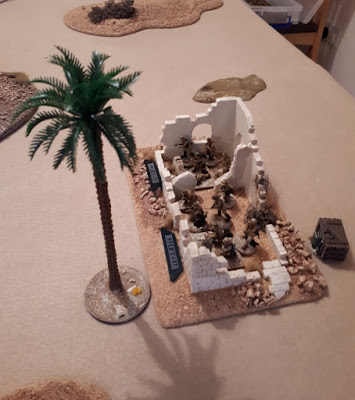 We agreed that the rocky tops of the hills would offer hard cover so they became almost like mini-fortresses.  A few turns in (yes, Mike and I kept rolling triple sixes!) and the allies are beginning the attack. 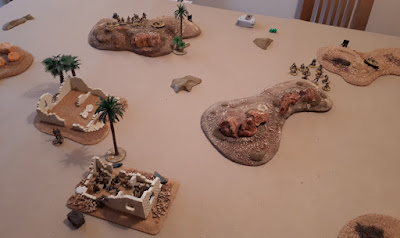 Jerry launches a flank attack.  A double turn affords me the opportunity of deploying troops and then getting them to leg it in to a good position. 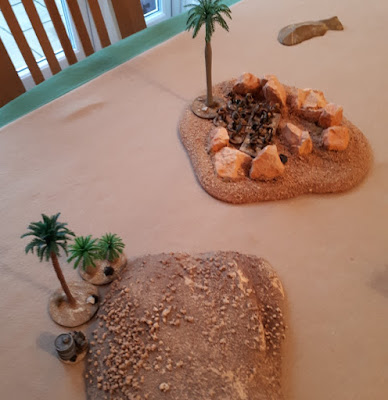 Mike's chaps take up a good position on the rocky dune and let rip on the Germans amongst the ruins ... taking out the Obergefreiter.  But fortunately this had little effect on my Force Morale. 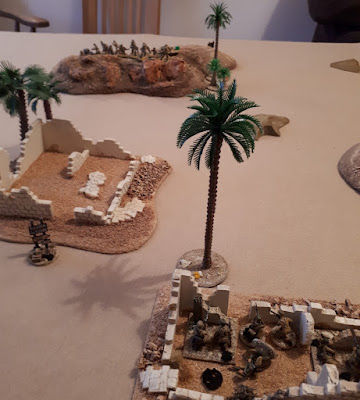 But, using a '2', my chaps dealt out a world of pain to another British section on a rocky outcrop. 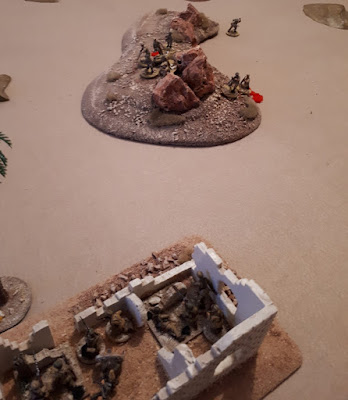 They fell back on their Platoon Sergeant to rally and regroup. 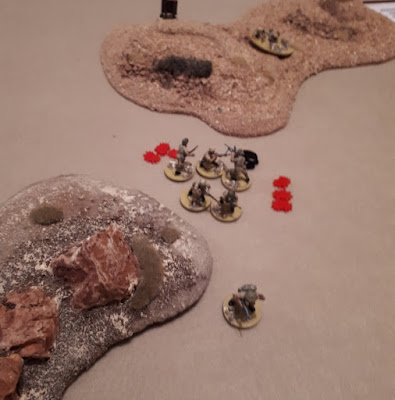 All this meant that Mike's Force Morale took quite a beating.

The next pic is a bit of jump... Mike brought on a Crusader which used its machine guns to wreck the German squad in the central ruined building.  They ran out of the back door and used the ruins as cover to help mount a flank attack on the British hill. 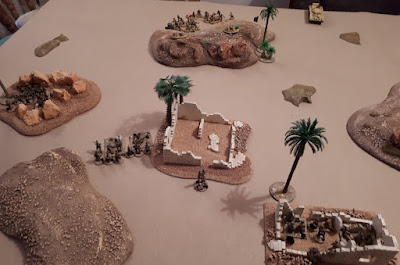 And foolishly pressed their 'advantage'!? 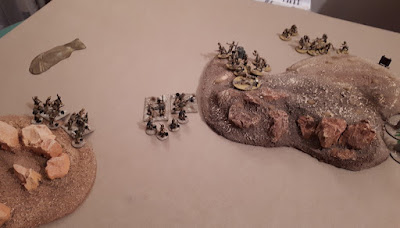 Mike's Sniper did well and twice narrowly missed taking out one of my Senior Leaders.

The Crusader threw up an interesting situation.  I brought on an AT rifle team and a few lucky shots resulted in the tank being forced to reverse off the table.  We checked the rules but eventually agreed that it went back in to reserve, so a few phases later it returned.  We felt that this seemed more fun.

Alas, no more photos as we got rather caught up in the excitement!  Mike's chaps doggedly refused to give up.  I really had to take the fight to the British to try to force a result and Mike played on brilliantly.  My initial gains were almost blunted by Mike's stubborn refusal to retreat.  Indeed, one good round from his Sniper and the Crusader might have carried it for the British, but in the end Jerry pushed the Allies back. 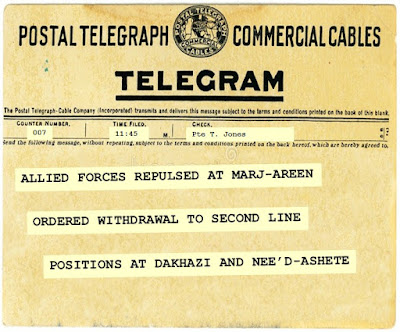 Crikey!  What a splendid game.  Even on a morale of 3 Mike's chaps were fighting hard and might yet have won the day. My thanks to an excellent host for a lovely lunch and a marvellous afternoon of gaming.
Posted by The Wargames Table at 12:58 7 comments: 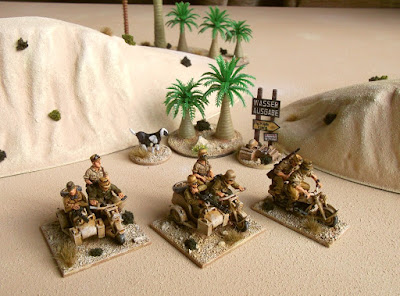 Prepared and ready to paint, the riders with tabs were glued to some old slotta bases to make them easier to paint. 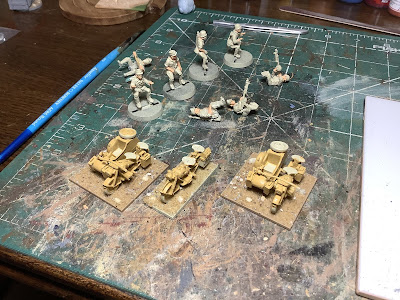 The motorbike and sidecar combos are Perry, whilst the other is a Warlord kit.  Have to honest here and say the Perry castings were less than stellar and were quite fiddly to build and position. 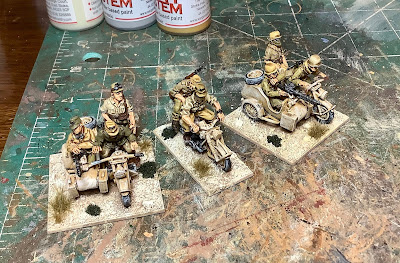 In the pic above the handle bars have yet to be eased into a better, more natural position.

Painting and basing was exactly the same as all my other DAK infantry and vehicles - have a look at the "Painting" tab above to find some links if you're interested in the paints, technique, etc.
Posted by The Wargames Table at 08:41 9 comments:

Both Chain of Command and Sharpe Practice have quite a few tables in the rules so a playsheet comes in quite handy.  There are a few 'out there' on the interweb but I fancied doing my own thing.  I've got the PDF versions of the rules so it was easy to cut & paste my own playsheets.

They are both just two sides of A3.  Here are couple of them nicely laminated. 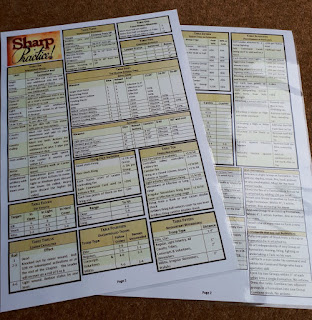 The SP2 random event tables aren't included but I think pretty much everything else is.

Here is the Chain of Command playsheet.  At the last Clotted Lard event Rich dubbed these "the bed sheet of rules". 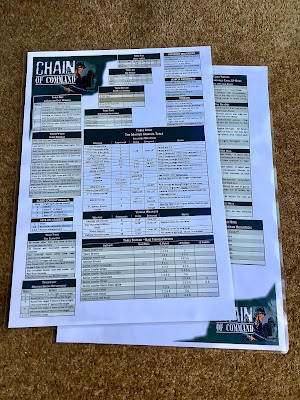 Having everything you need on just one double-sided sheet should make for easy reference.  If you'd like an electronic copy then please just email (see top of blog).
Posted by The Wargames Table at 08:02 10 comments: