Wargaming plans are just like real military plans in that they usually don't survive contact with the enemy, or in this case, real life!  Anyway, despite setbacks we muddled on as best we could.  But rather than play the full-on campaign the decision was made to make this a "practice game", i.e. not worry about the campaign aspects - we'll do it 'properly' at a later date.

The Paras have to roll as their drop was a bit of a muddle, they got two Senior Leaders and a Sniper for the HQ section (Look Hans, no pesky 2" mortar!), No1 section was fine, but both 2 and 3 were missing a Bren.  So they'd have just three Brens against my six LMG's plus I'd taken an MG42 team and an adjutant as supports.  The Paras get no supports ... I was feeling quietly confident.

Here's the table ... now, I do have a heap of wheatfields (golden grass door mats!) but they're in the garage somewhere, so just imagine the open spaces covered in rolling fields of ripening wheat.  To be fair, Paul's lovely textured gaming mat does a pretty good job. 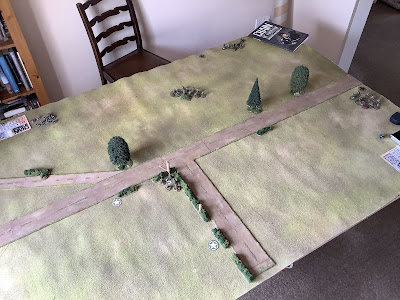 The Patrol Phase ended with the Paras getting three Jump Off Points (JOP's) in what seemed to me to be pretty good positions along the sparse hedgeline.  The Germans got two on the Eastern flank (I was hoping to close the distance to the Paras) and one by the road. 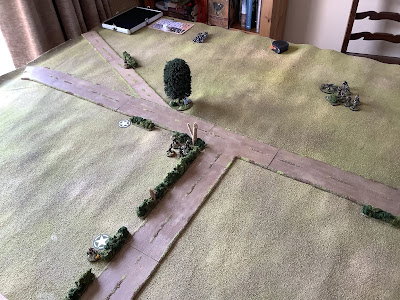 A few phases in now and the Germans are pushing forwards.  One squad is moving tactically on to the Paras flank, covered by an MG42 team.  Another squad has deployed by the road to pour more shots on to the Para position.  Both sides traded a lot of shots but hardly any casualties or shock were inflicted.  The German SL is with the MG42 team (so they can go in to overwatch).  The Adjutant support kept my off table troops organised.  Note the crate of fruit by the Germans next to the road is an overwatch marker as I need to make some new ones :o) 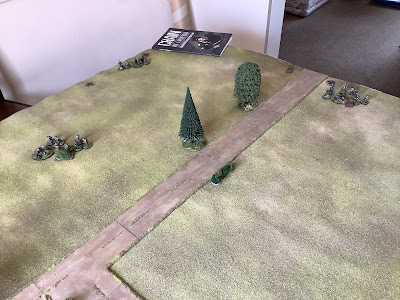 Here the partial sections, No 2's rifle team and No 3's Bren team, hold the hedgeline.  Out of shot are the two snipers, one from the HQ section and one from No 3.  The complete No 1 section was being held back ready to counter the Germans if they pushed too close.  The huge amount of German firepower is finally starting to rack up shock on the Bren team. 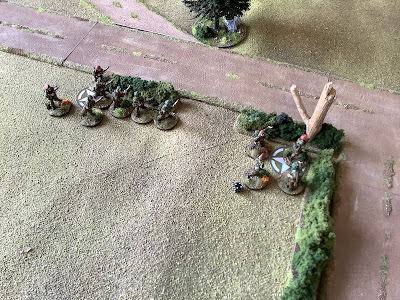 With shock mounting, the Para Lieutenant (Senior Leader) deploys and rallies off three points.  The remaining single shock does not affect shooting.  So, the sergeant can then use his two 'pips' to focus shots on just one enemy team with the Bren. 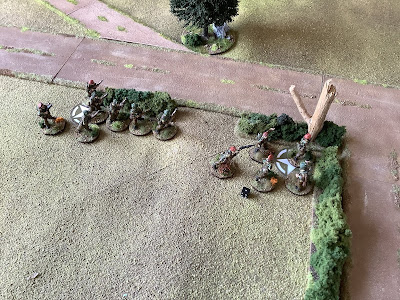 The Paras are doing okay at thinning out the Germans crossing the wheat fields.  However the brave Obergefreiter was managing the shock and keeping his lads moving.  The Para snipers were soon nicknamed "Blind Bob" and "One-eyed Dave" ... they were absolutely terrible shots! 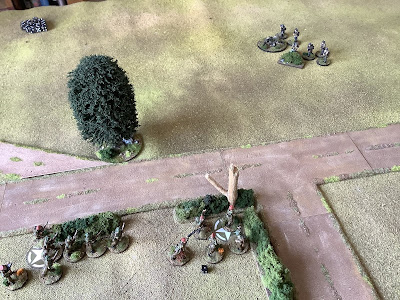 The Germans are creeping ever closer, well supported by a heap of shooting from 3 MG42s but the brave squad leader is picked off by the Bren, however it's only a light wound and I have a CoC dice ready to use.  My plan had been to use the supporting MG42s to whittle away at the Paras on their JOP, advance close with the squad, then use the CoC dice to end the turn and take the JOP - that would dent their morale!  But... I would have to use the dice to end the turn and get the Squad leader moving again ... Drat! 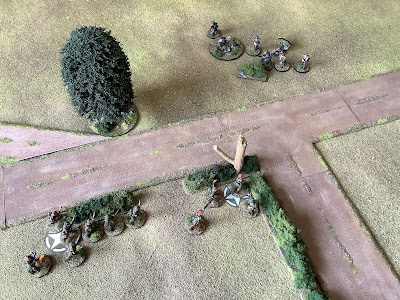 A splendid round of shooting from the supporting MG42s followed by a charge in to close combat by the Germans wiped out the Bren and killed the sergeant (fortunately for the Paras their Lieutenant had moved to the nearby rifle team!).  Both sides had lost a few points of force morale at this point, but it was still very close.  So, the JOP was mine but could I hold it long enough to get one more '5' and a full CoC dice? 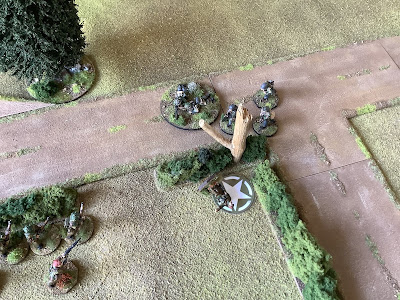 Predictably, the answer was a solid "No" ... The complete No 1 section deployed from the western JOP and hosed the Germans with their Bren and .303's.  The rifle section (using the British special rule, "Five rounds rapid!") finished them off.  This was actually a closer run thing than perhaps it might appear.  An 'unhelpful' round of command dice for the Paras, followed by a '5' for the Germans would have shut down that JOP. 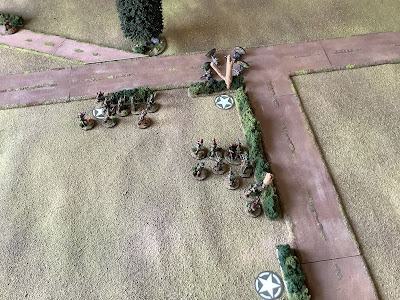 The third German squad deploys on the flank but quickly picks up some shock (the snipers had found their spectacles) so the Leutnant moves up to help stabilise the situation.  It's a risk but I need to keep the men moving.  I had to use both leaders to reduce the shock so no Tactical this time either.  Every point of shock reduces movement by 1" and moving tactically is only a D6" so the shock had to go. 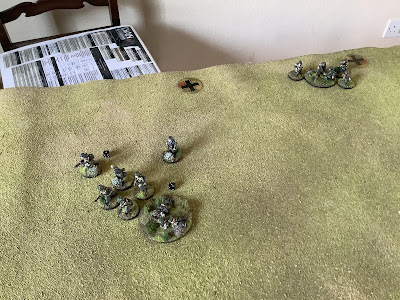 But ... Ouch!  The Paras finally get a double go and the second proves to be a phenomenal round for shooting (which, to be fair, they were due).  The whole squad is wiped out including the Obergefreiter and the Leutnant.  That scrubbed four points off the German force morale. 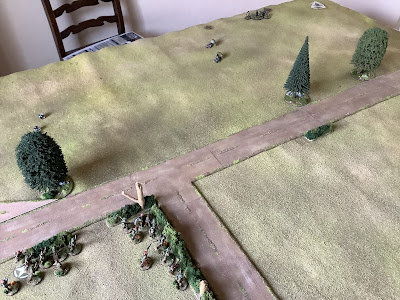 That was it for my Germans and they withdrew.  What a superbly enjoyable game!  Had it been a real campaign game then I would have withdrawn much sooner.  As it was the butcher's bill was 6 Paras including one sergeant, against a whopping 20 Germans including three leaders.

I'm really looking forward to getting this campaign going!
Posted by The Wargames Table at 11:14 4 comments:

Yes, it’s the start of yet another project here at the table!  Soviet forces for World War Two, primarily for Chain of Command, hence the Patrol Markers and (temporary) Jump Off Points. 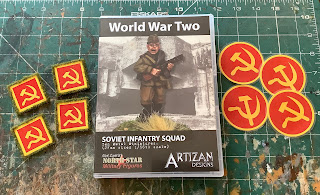 George from http://musingswargameslife.blogspot.com kindly made the markers for me 😎

The figures for this project will be mainly Artizan with a handful of Crusader models.  The few that I currently have are superb, more about them in a future post.
Posted by The Wargames Table at 08:36 6 comments:

Last weekend was show time again for Charlie Foxtrot Models and Colin kindly invited me along to help out.  Here we are. 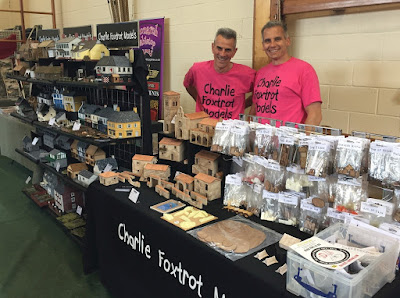 Business was quite brisk on Saturday so I only had time for a quick look around the games but two in particular looked very good.  The first is WWII in the east, put on by Brian, Chris and Laurie ("Combined Oppos") with the Japanese trying to capture a bridge from Allied forces. 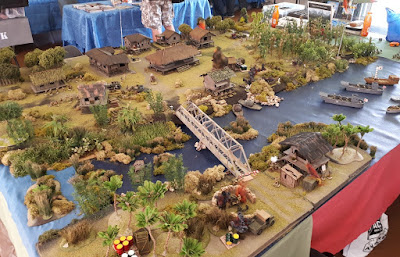 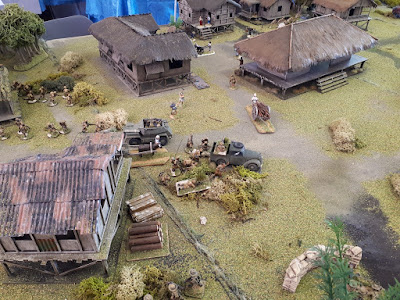 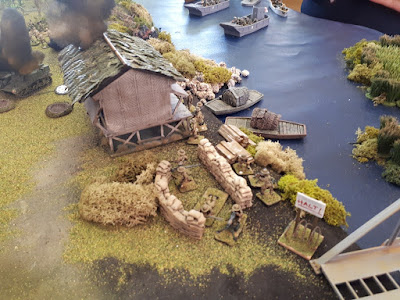 The other was another WWII game set around the Red October factory, this time in what looks to be 15mm, possibly 20mm?  Very impressive. 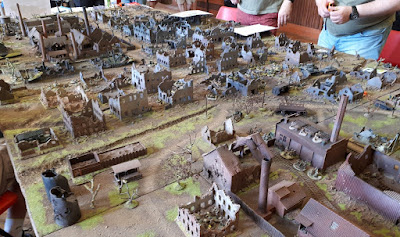 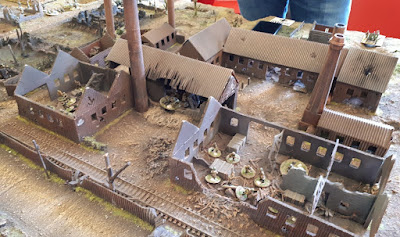 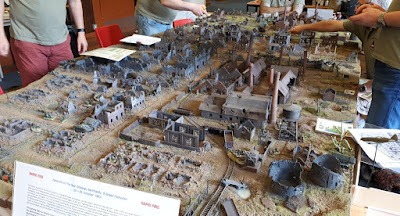 The show itself seemed well organised and quite well attended.  Also, a big thank you to Tom and Lloyd (nice to meet you fellas!) for helping Colin pack up and load the van! Much appreciated :o)
Posted by The Wargames Table at 11:32 6 comments:

A quick post today to show you some explosion markers I’ve made for our World War Two games.  I made a couple quite a few years back and kept thinking “need to build a few more” 🤣 so at last here they are!
They are very easy to build: start with an mdf base (I used 40mm squares, 3mm thick) and drill one hole in the middle and then several around the edges ensuring the drill is held at an angle.  Next, glue cocktail sticks or kebab skewers in to the holes to form the armature.  These should have a variety of lengths.  Then, glue on lots and lots of scenic clump foliage (or similar foam) starting with large pieces around the base and smaller pieces as you work out towards the “arms” of the explosion.  Keep turning the piece around so as to ensure a roughly even shape.

To paint them, first spray a couple of heavy coats of black (or very dark grey) until the base colour of the foam is hidden.  Ensure it’s thoroughly dry then apply a couple of very light sprays of light grey then pure white.

These will be useful for representing blown up tanks, mortar strikes or just generally giving the game a bit more bang! 😉
Posted by The Wargames Table at 11:01 11 comments:

I am still here!

It's been a busy few weeks recently hence the blogging has rather tailed off.  However, things are still moving along gently in terms of hobby fun.  A recent (and fantastic) holiday to France has inspired me to add to my scenery collection.  So I've made a start on the splendid "Banque de France" kit from Colin at Charlie Foxtrot Models. 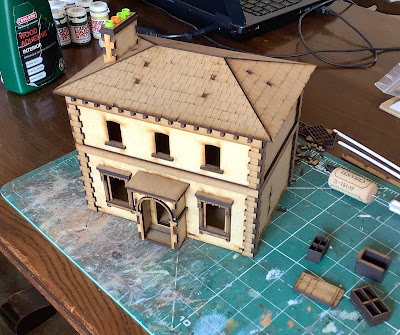 This will probably feature as a more up-market residence with gardens, etc, or I might make it in to a "Mairie" for the forthcoming "village" project.  I'll do a couple of proper blog posts on this as it develops.

I also want to build a small garage / workshop / petrol station so I've ordered the workshop kit from Warbases. 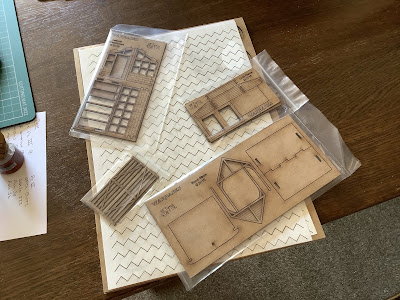 Additionally I bought some cold frames and a greenhouse for the grounds of the larger house.  I've ordered the petrol pump set and a 30's style car from 1st Corps too.

But it's not all Normandy!  My DAK forces will get some hefty reinforcements in the shape of a Panzer III Zug. 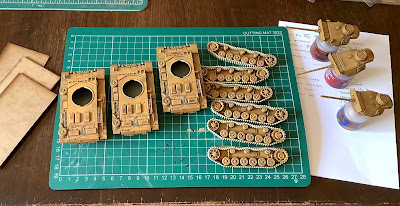 I'm hoping to get these ready for a big game with Orange Dave on the 8th.  We're going to try the "put all our toys on the table" kind of battle.  So I'll be blogging about that soon.

Happy gaming!
Posted by The Wargames Table at 10:18 6 comments: