Another January and another chance for this dynamic duo to strut their stuff!  Colin kindly asked me to join him on the Charlie Foxtrot stall. 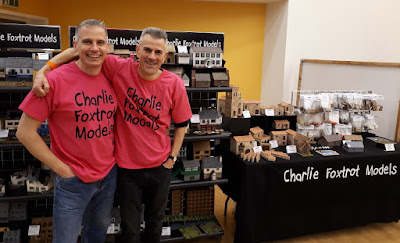 It was suggested last year that Colin and I looked like a slightly camp, ageing boy band... So Colin went for a new corporate look ... it certainly drew a few comments! :-D 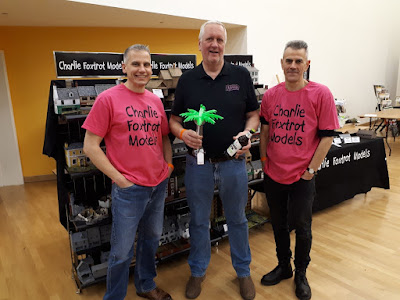 Here are a few pics of some of the demo and participation games on offer. 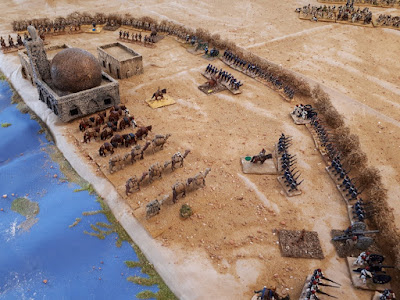 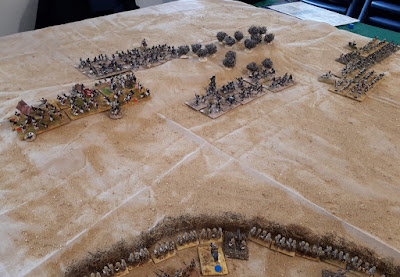 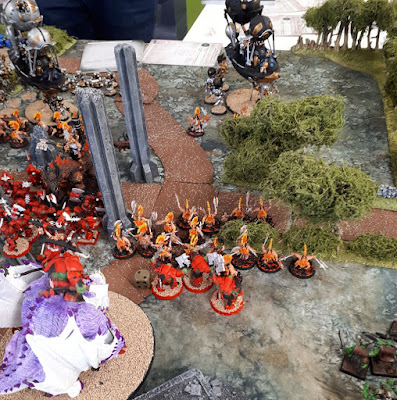 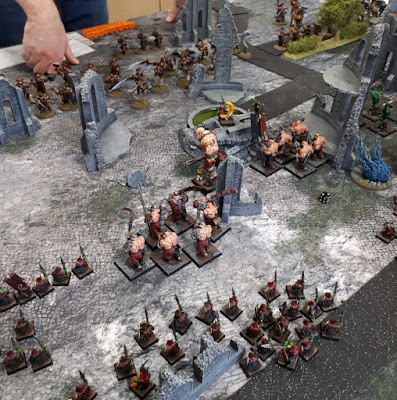 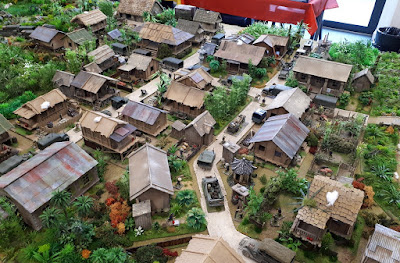 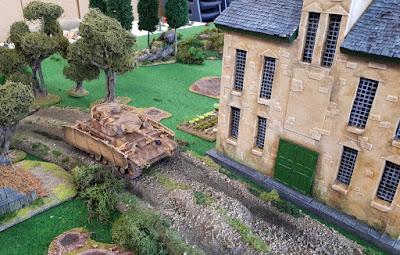 It was great to catch up with friends on the trader circuit, although it was a pity that regulars like Colonel Bill and Ainsty's couldn't make it this year.

Well done to the lads organising the show!  As usual they were a huge help in getting the stock unloaded from the van.  All round a very entertaining day.  See you next year.
Posted by The Wargames Table at 19:24 5 comments:

Tobruk falls to the Axis Powers!

The next step in our desert campaign is the Axis attempt to break through the defences surrounding Tobruk, the Battle of Ras el Madauur, which took place on 13th April 1941.  Dave's Aussies are heavily dug in on a trench line (represented here by a line of sandbags), in front of which were minefields, an anti-tank ditch and barbed wire.
Here are Dave's brave Aussies busily preparing a very warm welcome for Rommel's finest. 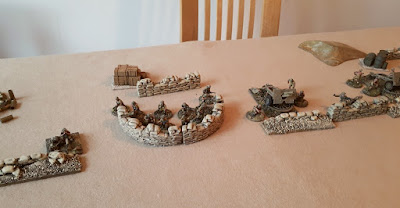 After a quick 'command conference', Mike and I decided to throw everything in to an all out assault on the Allied lines.  The battle starts before dawn so the Night Fighting rules apply and we roll each turn to see if the sun has risen.

The view along the Axis lines! 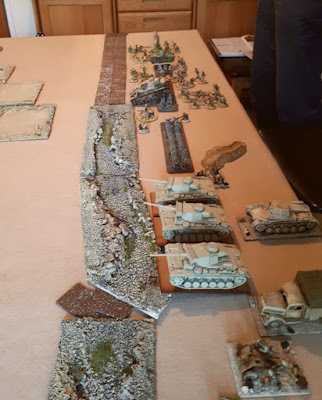 Now, silly Warlord don't seem to have actually specified the rules for anti tank ditches (if they have then please do let us know!) so as soon as the Panzers broke through the wire we had to think up suitable rules ... being relaxed gamers this was easy ... Advance move only, roll a D6, 1-3 stuck, 4-6 move onwards, three consecutive 'stuck' results and the tank is immobilised ... and on we played!

The Panzer III's were making hard work of the ditch but Dave's men couldn't make their spotting rolls and when they did their aim was terrible. 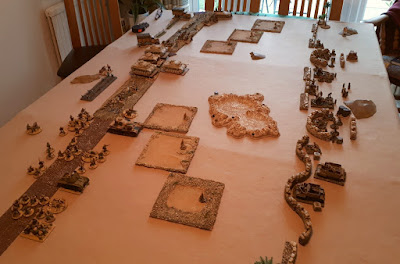 A couple of pics of the forces arrayed against Dave's Aussies.

The first couple of turns were pretty quiet in terms of shooting as it was pitch dark and thus spotting rolls were very difficult to achieve.
As the Panzers neared the Allied line Dave blasted away but again his shooting rolls were dreadful.  Even worse, one of the 25lber crews with just one pin marker, FUBAR'ed and ran away!
Mike took this pic (thanks!) and you can see that his brave chaps are pushing forward with all speed. 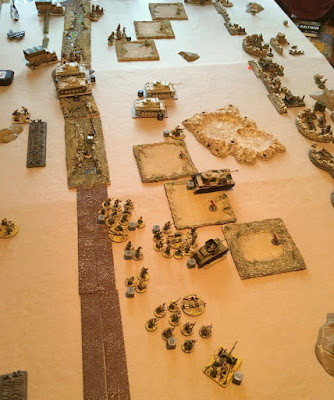 Mike's Panzerjaeger I (upper mid-centre) is a fantastic little model.
The Panzers push on through the defences. 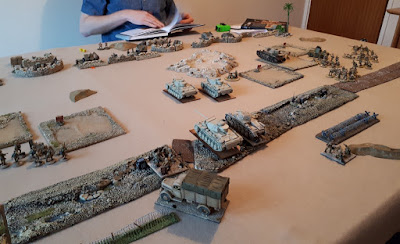 One of the Panzer III's has spent three turns trying and failing to cross the ditch so with it's engine overheating it becomes firmly wedged.
But on the left flank a brave squad of Schutzen have pushed their 251 forward, de-bussed and taken the fight to an Aussie Vickers team.

Back in the centre the Panzer II has cleared the ditch to support the Panzer III's.  A combination of all their MMG's shreds the remaining Allied howitzer crew.  Dave's centre was looking decidedly vulnerable.
It was at this point that Dave's artillery support finally arrived ... right amongst our Panzers.  Mike and I held our breath as Dave rolled but none took a direct hit.  However, he did put a hefty 3 pins on each of the Panzer III's.  Clearly this would hold up the advance whilst the battered crews recovered their senses.

But wait!  What's this?  Dave finally makes a couple of good rolls for his reserves and on rumbles a Matilda and an A10.  Watch out Jerry! 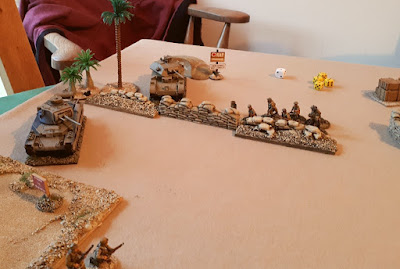 The Panzer II has moved forward to bring it's guns to bear on the HQ unit holding the leftmost bunker... But uh-oh ... those Allied tanks were not a welcome sight. 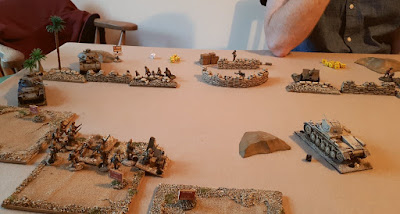 This results in the Panzer II taking a real beating from the Allied armour, but it's not quite knocked out. 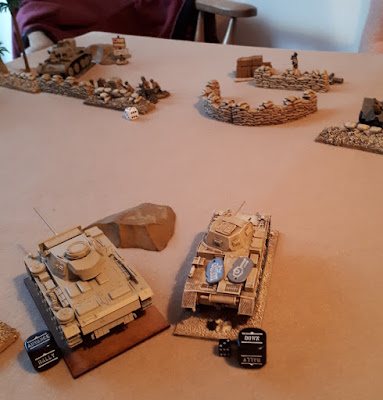 Immobilised, turret jammed and three pins - my command vehicle is in a bad way.  But his big brother the Panzer III is coming to the rescue!  Then the other Panzer III moves up to engage the Allies. 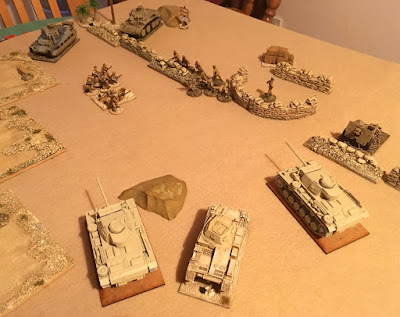 They trade shots in the final turn.  Shells ricochet off armour plate and still no tanks are knocked out. 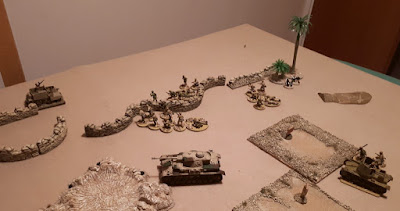 Phew!  What a game... it "officially" ended on turn 6 with the result being a draw (slightly in favour of Jerry) but we played turn 7 anyway and the Allied lines were shattered.

Some other key points:

Another thrilling instalment in our North Africa campaign.  My thanks to Dave for being such a sporting opponent and my thanks to Mike for being a stalwart ally and a most excellent host.

The next chapter in the campaign is the opening move of Operation Battleaxe, the battle of Halfaya Pass, known afterwards as Hellfire Pass, 15th June 1941.  It will be the British forces turn to attack the German guns holding the pass.
Posted by The Wargames Table at 09:41 5 comments:

Good chum Dave has been busy with his brushes recently and asked me to blog about the latest addition to his North African British force... A smashing Matilda tank. 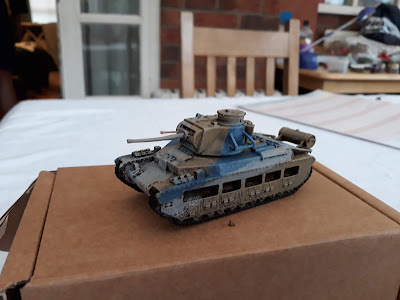 The distinctive camo scheme is known as "Caunter". 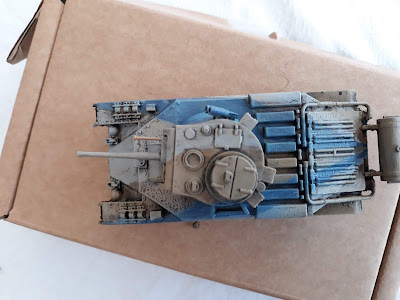 Dave's recipe is as follows - the colours are Portland Stone, Silver Grey and Slate
NB - Dave asked me to point out that he's used the Tamiya painting guide which some have suggested might not be entirely accurate.

Looking forward to getting this in the sights of my DAK gunners!
Posted by The Wargames Table at 09:00 8 comments:

Following on from the desert style barbed wire here's some more up-cycled terrain.  Again these items were originally made for Great War games ages ago...  And again I've decided they're more urgently required in North Africa so I've given them a makeover.

They're very simply made from blue styrofoam with balsa and coffee stirrer revetments. 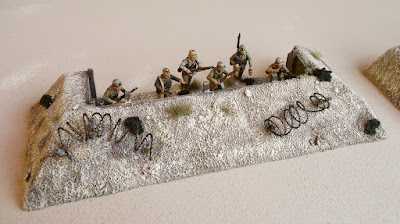 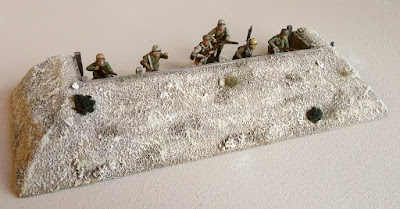 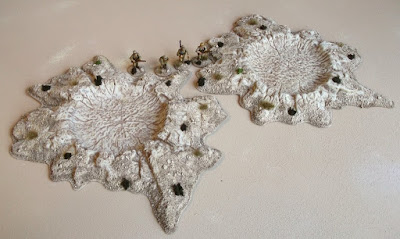 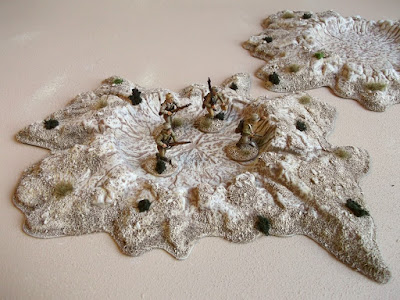 The basing recipe is the same as my figures: Americana Country Maple, then highlights of Americana Tan, VMC Dark Sand and Foundry Boneyard light.  Followed by a few clumps of dark green Woodland Scenics foliage and some arid looking tufts.
Posted by The Wargames Table at 10:25 10 comments: