It's always so exciting when the first boxes and blisters of your new army arrive! 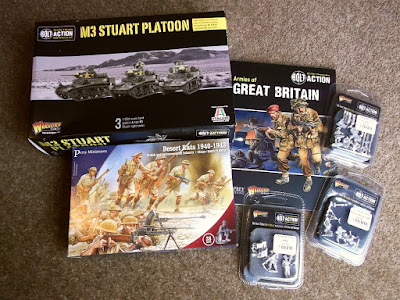 Yes, Santa has been very kind here at the table!  There should be just enough figures for a 1942 British Armoured Brigade force consisting of
I should also be able to build a Boys anti-tank rifle* team and a light mortar team, plus maybe a sniper* team too so as to give me a little more variety in the troops available.  Transports to follow.
Depending upon how some eBay trading goes in the next little while I may add a Humber MkII armoured car.
*not actually an option in the armoured list, but fun to build & paint!

But it's not all British armour.  Jerry is getting in on the fun too. 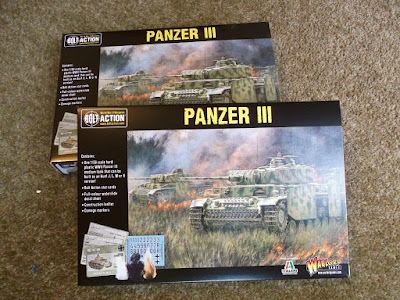 Two more Panzer III's roll in to give me the option of fielding a 1941/42 Panzer Division force.  This means I'll have enough for two DAK forces, one Light Division (primarily infantry & supports) and a Medium Panzer Division.

Have fun with your toys!
Posted by The Wargames Table at 10:43 7 comments:

... watched their flocks by night?  Technically I suppose they're goat-herds but, hey I couldn't resist a little festive themed post for our North African project. 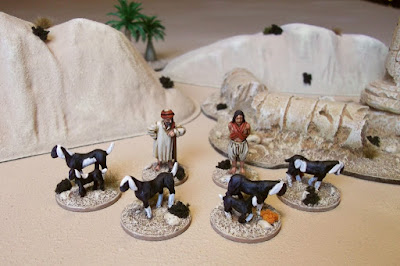 Again, it's all about making the table top look a little more lived-in.  Although I'm sure they'll make a run for it as soon as the shooting starts!

The goat-herds are Arab civilian figures from Perry miniatures. 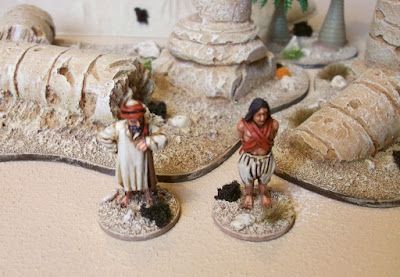 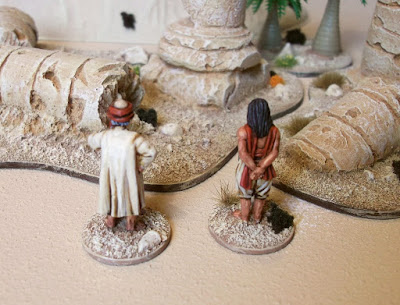 The goats are from Warbases. 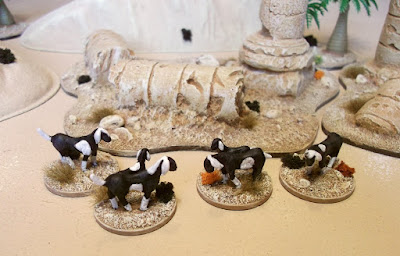 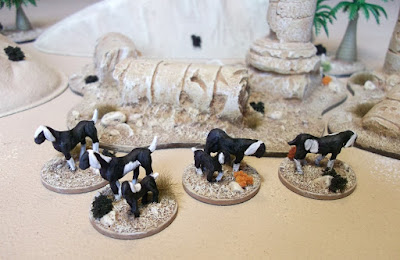 Merry Christmas everyone!
Posted by The Wargames Table at 02:00 8 comments:

Yes, I've finally slopped some paint on a couple of vehicles for my DAK! ("About time" - says George!).  Anyway, here they are... 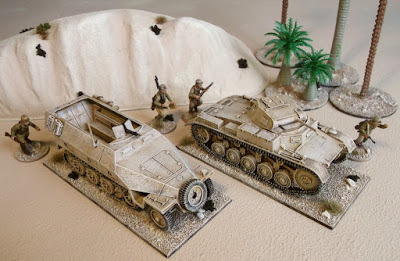 Decals still to go (awaiting Microsol) but I think they look okay.  The painting "recipe" was as follows:- 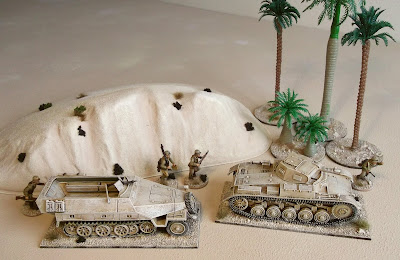 I think the highlighting with the Foundry Boneyard light went a bit crazy with the 251, but hey after  few months in the scorching desert it's bound to look a bit weathered? 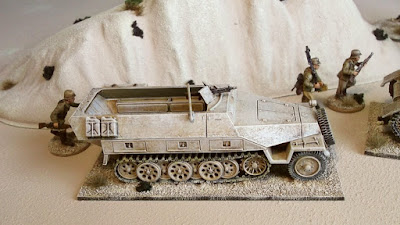 I love this little tank!  Packing a light auto-cannon and a co-axial MMG it epitomises early desert warfare. 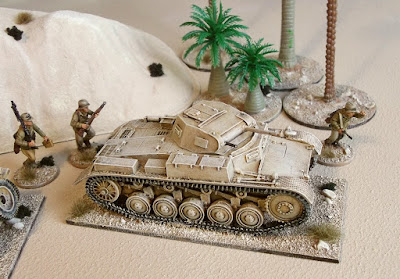 Inspired by chum Orange Dave, I've based them on some Charlie Foxtrot MDF bases.  Still plenty to add ... so lots more to follow.  Thanks for looking.

I found some barbed Wire sections in an old scenery box!  They were originally made for playing World War One games (WH's The Great War & Dave's Zero Hour) but I reckoned they were more urgently required in the North African desert... So I've "up-cycled" them. 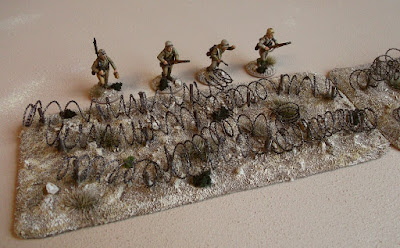 They're made from some off-cuts of MDF sheet into which I've drilled holes and glued short pieces of cocktail stick.  Some general purpose filler gives the ground an uneven appearance.  Next, they were covered in stones, sand, grit, etc then painted to match the bases of my figures. 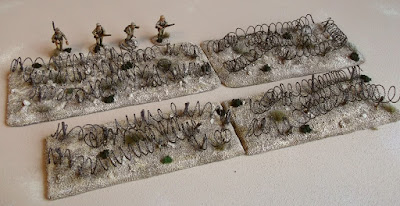 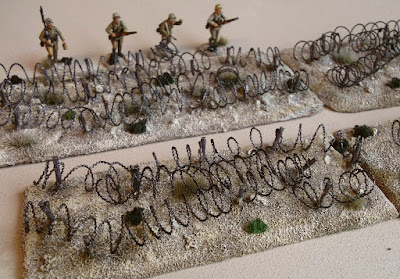 The barbed wire is available from a variety of games companies.  Wind it around a large paintbrush handle then spray it black.  Give it a few quick highlights of metal colours (silver and bronze).  A little dab of super glue glue attaches the wire to the posts.  You can also add in all sorts of debris like discarded weapons and helmets, bits of rusty vehicle, etc.
Posted by The Wargames Table at 09:30 8 comments:

Good chum Orange Dave has made a wadi for our Western Desert campaign and he's asked me to blog about it for him. 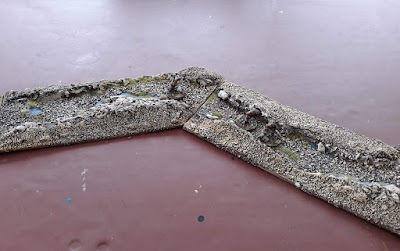 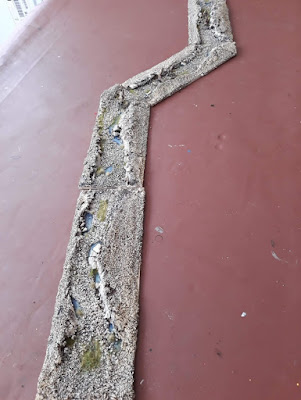 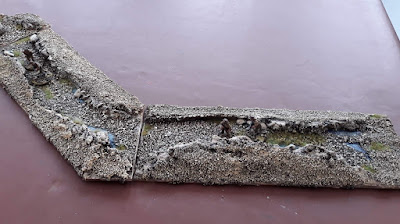 The sections are based on strips of MDF and he's used a mixture of stones, filler and grit, etc to build the edges.  He has also painted in a few patches of water and added some flock to represent the flora that would grow in the damp ground.  Simple, but really very effective I think!
Posted by The Wargames Table at 12:16 4 comments:

You're probably bored of seeing even more of Rommel's finest here on the blog!  Fear not, these are probably the last of the infantry... maybe!?

Another 8 infantry with a mix of MP40s and rifles. This allows me to field 6 full squads of schutzen plus a squad of 10 pioneers. 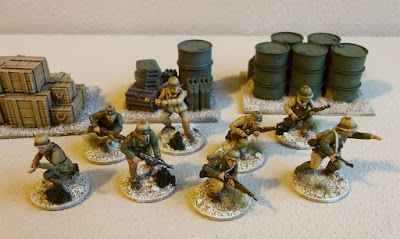 Here's an LMG team and a light mortar. 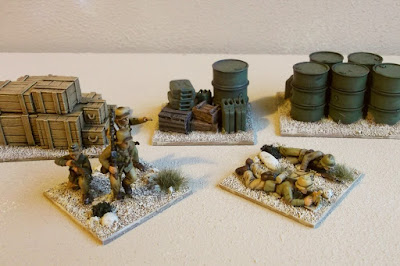 What to do next though?  Maybe the Panzer II and the SdKfz 251, or I might switch back to making a few more bits of scenery?  Thanks for looking.
Posted by The Wargames Table at 15:42 9 comments:

At last, the first game with my new DAK army! I joined chums Mike and Orange Dave to re-fight part of the battle for Mersa Brega - scenario 6 from the excellent new Western Desert campaign book. Mike and I both had 1250 points to face Dave's very well entrenched British force of 1250 points. So, a 2:1 advantage for the Axis forces... but with the town so heavily fortified would it be enough?

The town, with the ruins of the mosque in the centre, was surrounded by barbed wire, barricades and minefields.

The Axis forces began the game entirely off table.  I decided to send my two Opel Blitz trucks on a wide flanking move, having crammed them full of well armed veteran schutzen.
The initial attack was to be made by my regular platoon supported by the Panzer II and a SdKfz 251.

Mike also brought on a couple of squads, a mortar and a SdKfz 222.

I always try to bring a mortar to the party... and here's why.  Turn 2 and they drop a shot plum on top of one of Dave's 25lb-ers!  Take that Tommy!

Dave made the splendid desert road sections.  If you look closely you can see that he's even modelled the drainage culverts necessary to keep the road from flooding in the sudden desert downpours.  The benefits of gaming with a civil engineer! :o)

Mike took some great shots of the game.  You can see that there's quite a lot of open ground to cross before reaching the walls!
Having seen Mike bring on his Panzer III, Dave deploys his ponderous Churchill on the opposite flank.  Of course, this had to be the flank where I'd (hopefully) be bringing on my outflanking force.
Dave calls in his off table artillery support which arrives with a bang just next to the craters, but Mike's men are only slightly shaken by the sudden bombardment.  With the 25lber gone and the nearest Allied sections quite heavily pinned Mike pushes his men forward in a dash for the buildings.
My regular platoon had taken quite a beating from the Allied position, but I still had some reserves plus the flanking force.
But Dave's men were feeling the heat too ... and not just from the desert sunshine!

Turn 4 and my flanking force arrives!  Both trucks are surprised to find a Churchill parked on the road but orders are orders.
Amazingly the trucks and the men on board take very little damage from the tank.  Dave very kindly reminded me of the rules for transport vehicles relative to enemy positions (thank you). In my excitement I'd completely forgotten that empty transports mus not end the turn with enemy nearby! Anyway... The first of my veterans de-bus right on the edge of the town.  Mike has deployed his Pak 38 and is very keen to introduce it to the Churchill.  In the pic below you can see that Mike's men have made it in to one of the buildings.  A quick tally of the VPs shows that it's too close to call with both sides giving as good as they got.

With the fight to capture the town really hotting up Dave brings on a couple more sections to counter the increasing numbers of DAK.
Dave keeps the Churchill back using it's main gun to good effect, so Mike pushes his Panzer III forward in the hope of getting a flanking shot on the Allied monster.
The two foremost buildings were now firmly in Axis hands and the British sections in the rest of the town were coming under sustained attack.

By this point the game was so exciting and so close that I totally forgot to take any more pics of the final turn or two.  After turn six we rolled and got to play one more turn.  Both sides made every possible effort to achieve their objectives... As night fell and the dust settled we counted up the VPs and it was 14 points each!  A hard fought draw that neatly reflected the closely contested situation on the table.

What a superb game! My thanks to both Mike and Dave for an excellent afternoon of gaming.  This one had everything - moments of drama, comedy and plenty of heroics.

The open battlefield and more mobile forces make for a very different style of Bolt Action game when compared to our games set in Normandy.  Enormous fun all round.  Really looking forward to the Battle for Ras el Madauur next month.
Posted by The Wargames Table at 12:22 9 comments: