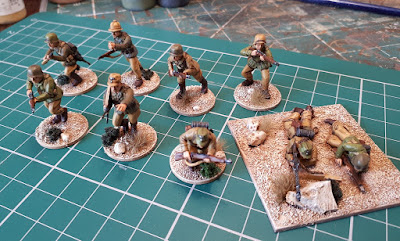 I've only taken a couple of work in progress shots.  Here you can see that I have just gone for tidy block colours on top of AP Desert Yellow spray.

The DAK uniforms were initially based on the tropical issue uniform but a combination of blistering sunshine and heat, wear and tear and supply issues meant that the uniforms varied from brand new field grey or tropical green, through a range of sandy greens, right through to almost pale sand.  The main colours I used were Foundry Moss shade/mid/light, Foundry Drab mid/light, VMC German Field Grey, VMC Grey Green, Foundry Boneyard shade.  Other items were as follows:-


Then a quick wash with Agrax Earthshade, followed by highlights in the original colours.  When highlighting post-wash I found that where I'd left the undercoat desert yellow, mainly trousers and helmets, a good highlight colour was Foundry Boneyard shade, thinned a little so as not to make the highlight too bold.

The figures are mainly based on pennies, so I had to apply a little putty to hide the 'step' of the figure's base. 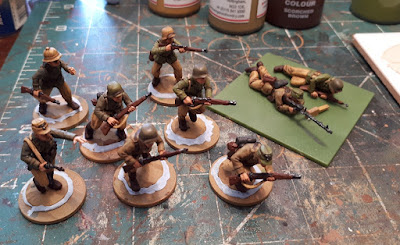 My basing recipe here is slightly different from my Peninsular figures/scenery as I wanted a different, more North African, sandy look.  It's Americana Country Maple as a base, then highlights of Americana Tan, VMC Dark Sand and Foundry Boneyard light. 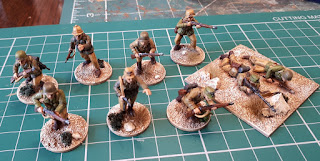 Looking at contemporary pics of the battlefields today (many have changed little) you see quite a lot of small, dark, scrubby plants so my bases have a few dry grass tufts and a little clumps of dark green clump foilage, but no static grass.

I've wanted a DAK force for along time to be honest.  Good chum Orange Dave has Eighth Army so it seemed the decent thing to do to give him opponents in the right outfits.  Also, Warlord have a new Western Desert campaign book coming out in September.  I'm hoping our other good chums Mike, Steve, Nigel, etc will join in the fun :o)
Posted by The Wargames Table at 11:54 9 comments:

Every year in July Battlegroup South host a splendid wargames show at the Bovington Tank Museum.  This year the show overlaps with the excellent "Bossfest" run by Scott from Boss Minis.  Now in it's fourth year, Bossfest actually actually runs from Thursday to Sunday.  Basically a group of easy-going, like-minded wargamers camp in a woodland clearing and play a wide variety of wargames and boardgames in the huge marquees.  In the evening there's music, a camp fire and (to be frank) quite a lot of beer and cider too!

The weather this year made the event a real treat.  The secluded location really makes you feel like you're getting away from it all.

Colin kindly let me share his tent.  It's an "air bridge" tent - basically the traditional poles are replaced by air filled beams that give the tent it's rigid structure.  Peg it out, pump it up then bang in the guy ropes.

The show is a two day affair, Saturday and Sunday, however the organisers were able to let us in on Friday evening to get the stall set up.  Chums Kevin and Kevin joined in too.

Setting the stall was completed in record time. So back to camp for pizza and cider!

Saturday morning dawned bright and clear so Scott cranked up the barbie and provided with hearty bacon sandwiches before Colin and I headed for Bovington.  Since the stall was all set we had time to wander around the museum and chat to the traders.  I really enjoy this bit, catching up with chaps I haven't seen since the last show (Penarth, January for me).


During a lull in trading I had a quick tour of some of the games on display.


Walking around the museum before it opened I turned a corner and was immediately confronted by this Panther tank.  It's a proper beast of a machine!

The show opened at 10am so just time for a quick pic.

My thanks to Colin for letting me join in the fun!  After a busy week or two I wasn't feeling 100% but this was exactly what I needed.  Cheers buddy!  Thanks also to Scott for Bossfest (and your lovely wife for providing us with a yummy lunch).  Top events and excellent company, already looking forward to next year.
Posted by The Wargames Table at 08:59 11 comments:

No prizes for guessing which German special rule I completely forgot in this splendid game of Bolt Action with top chum Steve!  It’s been a little while since Steve and I had a game of BA.  He's been largely focussed on Kings (see report of our recent excellent encounter here) but was now keen to dust off his lovely Russian army.  We were due to play in his man-cave (a spacious garden shed) but the very hot weather meant we de-camped to the somewhat cooler climes of his lounge.

Here’s the table – I particularly like the effect given by the lichen.  Must get me a bag!
After the obligatory cup of tea and a good chin-wag we set to with Key Positions again (well, that scenario with Dave was a hoot).

Turn 1
With no troops starting on the table (other than snipers and observers) this turn was all about advancing.  My chaps made the best use of the cover afforded by the church walls in the centre and the orchard on the right flank.  Steve, with superior numbers, advanced all across the line.


Turn 2
My Panzer IV rumbles on to the battlefield (okay, it’s a Stug... I recently moved house and the Pz IV is still in a box somewhere!) and blasts away at the Russian tank.  It’s a hit, but rolling a ‘1’ for penetration saw the shell harmlessly ricochet off the thick armour.

Turn 3
Things really began to hot up this turn.  I opened with a spectacular FUBAR that resulted in my squad in the churchyard opening fire against their mates crewing the MG42 by the orchard.  Two of the three machine gunners fell dead but thankfully the last chap held his nerve.
Steve’s heavy mortar targets the German assault squad on the road.  Rolling a natural 6 Steve drops the shot plum on target and wipes out the entire squad!  Ouch.  The German squad in the field next to the newly cratered road promptly failed their command test and went down.  Suddenly the left flank was looking a bit frail.
Poor command rolls dogged the German forces this turn with a total of four failed tests from my nine units – there’s not much you can do when you roll 10s and 11s.  This meant that the Russian horde could continue their advance with very little German shooting to oppose them.

Whilst Steve made another cuppa I took a few "across the table" pics.  Most came out a little too blurry (camera phone!) but these two are okay I think.

Turn 4
The Russian tank had two lucky escapes this turn.  The Pz IV shot hit but bounced off the armour, so a brave Grenadier with a Panzerfaust stepped forward to blast the enemy in the flank.  I rolled a 5 to hit ... then, needing just 2+ to penetrate, the dice bounced and rolled a 1.  It gained a couple of pins but that didn’t seem to bother the crew as they continued to roll forward spraying bullets into the squad sheltering in the churchyard.

The Russian heavy mortar team, buoyed by their earlier success, targetted another German squad.  This time it was the large veteran squad who’d moved out of the orchard across the fields to claim an objective - see the pic above.  Steve rolled another natural 6.  The 10 man squad was rapidly reduced to just 2 men, an LMG team, plus they picked up a heap of pins.

Again German command rolls were dreadful – but at least there were no more FUBARs.  What on earth was going on with these chaps?  The result was several squads of Russian SMG armed troops getting perilously close and virtually unopposed.  Gulp!

Turn 5
At last my Panzer commander got all his ducks in a line and put a shell right through the Russian tank.  But... it still wasn’t knocked out, instead it was ablaze.  The Russian crew had four pins by now so Steve rolled 2D6 looking for 5 or less, but they’d had enough and leapt for safety as the tank brewed up.

Steve’s heavy mortar actually missed yet another of my squads – we were both surprised ;o)  Next turn the squad (at the edge of the field in the pic below) would need to pass their morale test otherwise that mortar was bound to blast them.

This turn saw a lot of close range firepower dished out by Steve’s Russians, with most of my squads already having several pins it wasn’t looking good for Jerry!  I managed to inflict some casualties in return but Steve’s men (and women, Reg) had the best of it.

Turn 6
First dice out of the bag was black – so time to get that squad moving before the mortar zeroed in ... yup, you guessed it, they rolled high and went down instead.  Steve wasted no time with the mortar, requiring a 5+ and rolling yet another natural 6 to blow the grenadiers to smithereens as they crawled through the wheat fields.  That pesky mortar had accounted for more than a third of my army.

Turn 7
Steve had at last managed to get one of his dog bomb teams in range of my Panzer.  I’d blasted them with everything I could muster in previous turns but one still made it through the hail of bullets ...

And that was pretty much it.  Steve held two objectives, I held one and the fourth was still contested.  So a win for Steve 2 to 1.  However, in terms of casualties the result was much more in favour of the Russians.  Another superb game of Bolt Action.  My thanks to Steve for being an excellent host :o)
Posted by The Wargames Table at 17:25 12 comments: