We tend to play games with relatively little armour (most of the time), however I couldn't resist this marvellous armoured car from Blitzkreig miniatures. 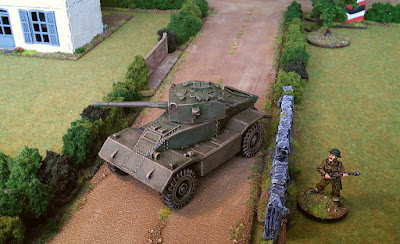 The kit was easy to build, consisting of a chassis, four wheels, a turret, barrel and machine gun. That's it! Oddly the pic in the web store shows a few extra bits like smoke launchers (I think) but they're not supplied? My only real grumble was that Blitzkreig took quite a while to deliver and I had to chase them up. But I do appreciate that like many gaming outfits, it's possibly a "hobby business".

I have yet to sort out the transfers/decals as they're not supplied with the kit, but the painting recipe is:

Have a look here for more information about the AEC Mk III if you're interested. A superb bit of good old fashioned British engineering! 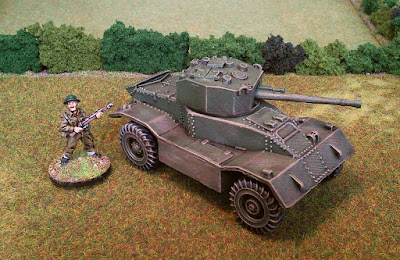 This little chap (the armoured car, not the bloke with the rifle!) packs quite a punch. That's a QF 75mm gun in the turret, with a co-axial machine gun for good measure! Must have been quite 'cosy' for the four man crew.
Posted by Matt at 09:31 11 comments: