Here's my latest bit of modelling - a rally point (or objective marker, etc) for my Early Imperial Romans! For War & Conquest it's a rally point, but other games systems often require similar "objectives" or it can just be a nice piece of terrain. 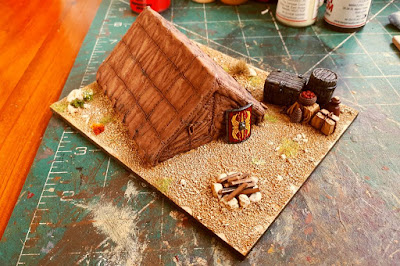 The tent is resin, from Grand Manner. The stack of supplies came from Bad Squiddo Games, the shield from Black Tree with the excellent LBMS transfers. MDF base from Charlie Foxtrot.

Painting recipe: Tent - Foundry Spearshaft shade, a wash of Agrax, then the shade / mid / highlight, ie the full triad. Supplies - The darker wood was painted Foundry Bay shade, the 'parcels' in Foundry Buff shade, the jar in Foundry Conker Brown shade, the basket in Foundry Butternut shade. Then give the whole lot a wash of Agrax. Then highlight with the original base colour followed by the rest of each triad respectively. Note - for the dark wood just give it a light dry-drush of a light cream like VMC Dark Sand to bring out the texture.

Here's a closer shot of some of the details. 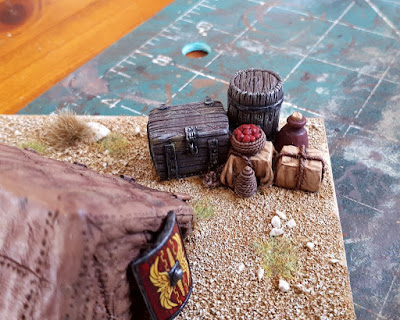 The fire pit was simply a circle of small stones with some short lengths of thick broom bristle glued in place. All ready to cook dinner on after a hard day of slaughtering barbarians! 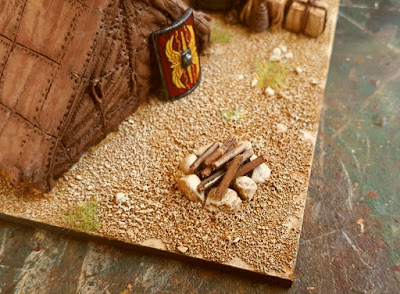 The basing is exactly the same as the rest of my sandy/arid desert themed Romans: VMC Gold Brown as a base, then highlights of VMC Tan Yellow, VMC Dark Sand then some Foundry Boneyard light. Followed by a little static grass, a few tufts and a bit of clump foliage. 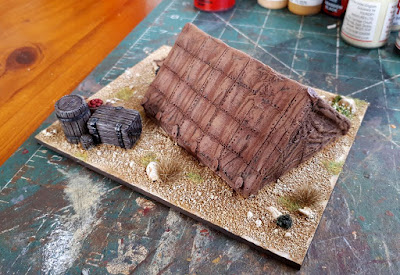 Home from home whilst on campaign! 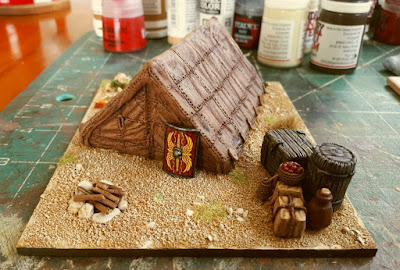 Thanks for looking!
Posted by The Wargames Table at 09:33 6 comments:

War and Conquest Weekend (with some Bolt Action too)

The recent weekend saw a number of us gather at the Bristol Big'uns club venue in Iron Acton for a weekend of War & Conquest gaming organised by Scarab supremo, Rob Broom. Now, rather than try to give you a blow by blow account of all the games, I've taken a few pics so that you can get a flavour of the fun had by all. There were several EIR forces, Dave's Carthaginians (who thrashed my EIR in a warm up game on Friday evening), plus several Successors forces.

My first opponent was Barry, a relative newcomer to WaC, fielding his own EIR force. The figures were lovely old Citadel Romans.
We had a great game! Neither of us achieved our objectives but Barry edged a win.

After a superb lunch (thanks to Barbara :o)) we set to again. And again I was facing more EIR, led this time by Nick.
The pic below shows the result of the roll off at a decisive point in the battle. I threw in three strategy points, Nick added just one. Grrr! :-D
Our very evenly matched armies slogged it out against each other for several turns with the advantage switching back and forth. However, one of my cohorts managed to rout their opponents, smashing a hole in Nick's line and swept away a nearby unit of Auxilia too. These men carried on to occupy to Nick's deployment zone and gain me a victory by achieving my objective.
An absolute belter of a game! My thanks to Nick (and Barry) for two great games.

On Sunday, the WaC fun continued but a few of us wanted to squeeze in some WW2 action too. Rob was very accommodating and allowed a whole corner of the room ;o)

Orange Dave organised the games; he and I would be the plucky British whilst Nigel led the German war machine. Dave picked D-Day as the theme so the first game would be Commandos landing on Sword beach.

Dave couldn't find the sea that he'd made previously, however he did find a roll of blue wrapping paper that made for a very effective stand in!
Needless to say the Germans had prepared a warm welcome. Nigel landed a mortar round in one of the landing craft which left is stranded in deeper water for several turns before the men aboard regained control.
Things were looking pretty grim for the Allies until the artillery finally arrived in spectacular style! The Germans took an enormous beating so we agreed that the surviving Allied troops on the beach would be able to get inland, giving a narrow victory to Dave and me.

On to game two... Staying with the D-Day theme what else could we do but our own version of the daring glider landing to capture the Orne bridges! Dave folded the paper to make a very effective canal.
A tense and thrilling game with some real moments of drama! The night fighting rules really add to the atmosphere of the game - highly recommended. However, as we shook hands it was a draw, the Germans were still vigorously contesting the bridge.

My thanks to Nigel for being a superb opponent and also to Dave for organising the scenarios and being a staunch ally. We still have game three to play; ideal material for a future blog post.

All round an excellent weekend of gaming. It's great to meet up with old friends, make some new friends and play some very enjoyable games of toy soldiers. Looking forward to the next event.
Posted by The Wargames Table at 18:06 2 comments: