Our D-Day campaign marches on! Game Four is loosely based on scenario three from the Chain of Command supplement Kampfgruppe von Luck, entitled "Attacking the Corridor of Death". The Germans have gained the upper hand after driving in the Paras forward positions during game three of our campaign. For this game Orange Dave would be starching his upper lip, waxing his moustache and commanding the Paras. The Germans would soon be heading in to the heart of Le Bas de Ranville.

Here's the map from TFL's supplement. 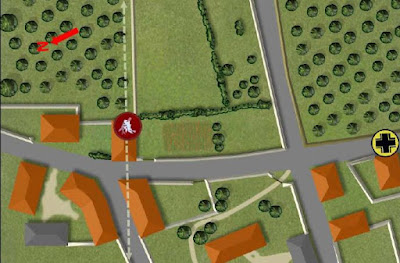 My own take on it is slightly different; mainly because it was easier to find the church than dig out other buildings! Anyway, I think it looks okay. 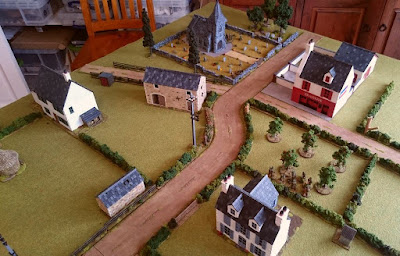 Dave has deployed half his force on the table, although (very sensibly) you can only see the odd figure. He placed his mortar behind the church with the spotter in the stone barn.

As they lost the last game, the Paras could only fortify one building rather than two, so Dave chose the old cafe. This meant the building took on 'bunker' status. This was beefed up with a Vickers MMG. 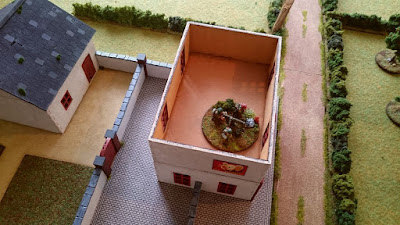 Here's the mortar, plus the sniper in the top right corner of the church yard. 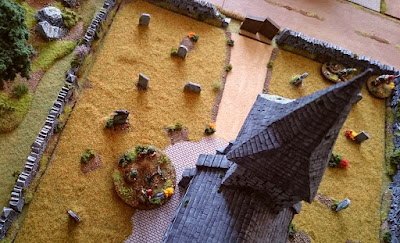 The barn had the spotter and a section of Paras. 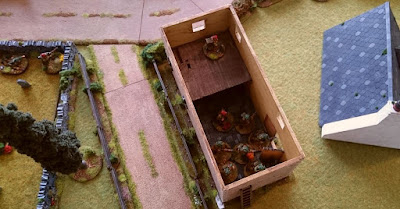 Downstairs in the cafe was another section. 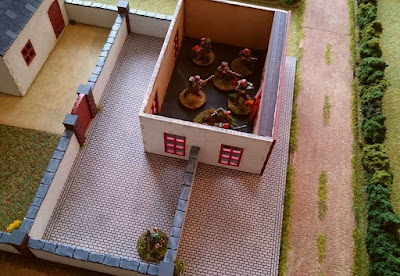 Here come the Germans, throwing almost everything in to the attack! That's two veteran squads, two regular squads and one inexperienced squad supported by an MMG, a sniper, a flame-thrower and ... a Stug. This is the first time armour has appeared in this campaign - it's mid-afternoon and the Germans are beginning to get some more significant support in this sector. 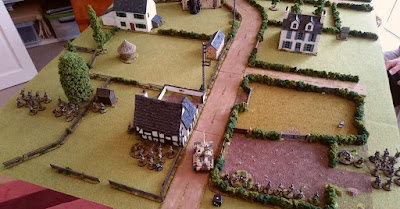 An early German dice allowed me to activate the Stug and it promptly put a round in to the barn. The Spotter wasn't in the least bothered but the section of Paras took a beating. Had they won the previous game then I expect that the barn would also have been fortified - then it would have been a very formidable position indeed! 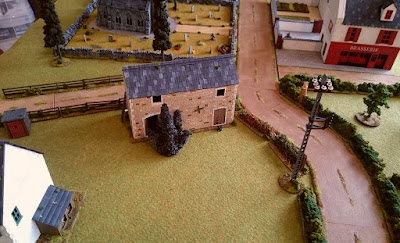 Apart from the Stug's shot it was a pretty quiet first turn. In turn 2 the Germans pushed forward quickly to try to overwhelm the troops in the barn and the right-flank farmhouse before more Paras could come forward. Again the Stug hammers the section in the farmhouse with some astonishingly well aimed HE. 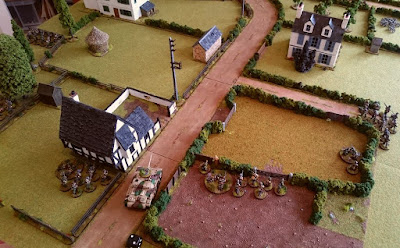 The Paras respond by moving the section in the cafe out towards the orchard, whilst behind them the light mortar and the CO also dash forward. 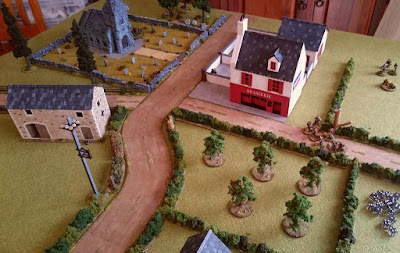 Turn three and the forces are starting to get within small arms range as the Germans really push their luck (or should that be their "von Luck"? - sorry) and dash forward. The Stug has put a second HE round in to the farmhouse which has all but destroyed the Para section - only one Para and the Sergeant remain. Those tankers will get an extra ration of Schnapps! 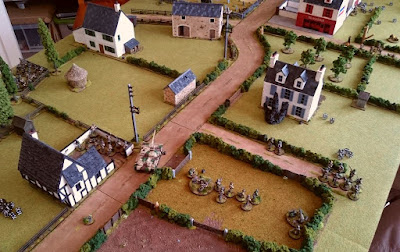 You can also see that the flame-thrower team were getting ready to leap the hedge and roast the Paras but the Stug has almost beaten them to it!

On the left flank the Germans are using their numerical advantage to good effect - one squad lays down fire whilst the other two dash forward. The Paras in the house fire away but the pins they've accumulated (2 or 3 , I think) mean that their shooting is pretty ineffective. 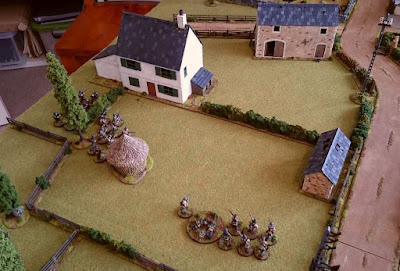 During turns 2 and 3 Dave has tried to drop a mortar shell on the top of the Stug. To avoid the -1 to hit penalty I've left the AFV in place and kept firing - after all it's only a 3" mortar ... !? He also used the free artillery observer for the same - 'so what' I thought - it's great for pinning infantry but I have a Stug ... bwah-ha-ha-hah!

Turn 4 - Another run of German dice meant that they could go on the offensive yet again. The regulars move along the lane (shaking off a pin from earlier Para sniper shooting) whilst the flame-thrower team light up the building. They do this in spectacular style, wiping out the inhabitants and setting the building ablaze. 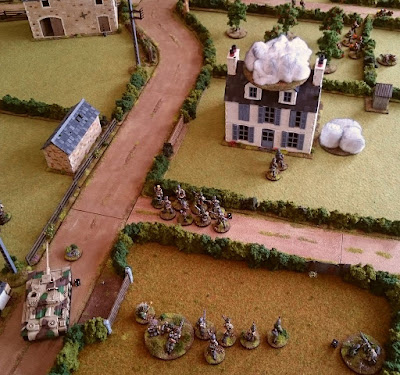 You recall me mentioning how I didn't think the mortar would be an issue for the Stug? Well - it wasn't ;o) But what I hadn't considered was how effective the 'freebie' artillery spotter might be! At last - after many delays the big guns delivered.

Dave's recent zombie-like dice rolling suddenly came alive! He produced a series of fantastic dice rolls. The squads near the Stug took a real beating in terms of pins but clearly the Stug commander had momentarily opened the hatch only for the shelling to land plum on top. Scratch one AFV! We both had a bl**dy good laugh about this I can tell you! 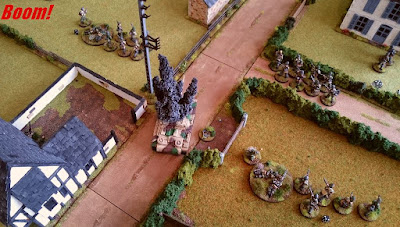 Turn 5 and the Paras are suddenly resurgent. With the threat of the Stug removed and some of the more exposed German squads taking pins it seemed that the Germans might be repulsed. The barn continues to be a tough nut to crack - two Germans squads pour fire in to it whilst a third seeks to outflank it. However, British reserves are moving up to the church yard and cafe. It's all in the balance. 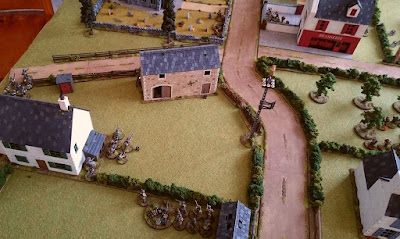 Here you can see Paras in the cafe courtyard. In the orchard are a small Para section with a Bren who have been picking off Germans advancing on the other flank towards the barn, plus the light mortar (using smoke to obscure German long range shooting from the MG42) along with the PIAT team - no doubt relieved that the Navy's big guns have sorted out the Stug. 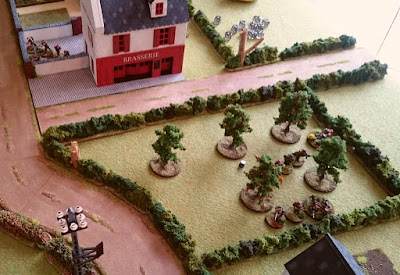 Last turn or two now and the Germans hold the advantage in terms of casualties caused (i.e. dice removed from the bag) but it's still not "in the bag" so to speak. The two German squads in front of the barn have finally dislodged the Paras although they've taken frightful casualties doing so and are no longer effective squads. However, this has allowed the squad of regulars on the far left to take up a position behind the church yard walls ready for another Para section coming forward. 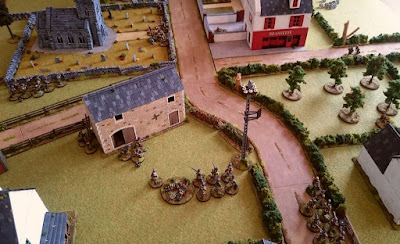 A slightly better view of things. The Germans continue to have the advantage of numbers but those veteran Paras are as hard as nails! 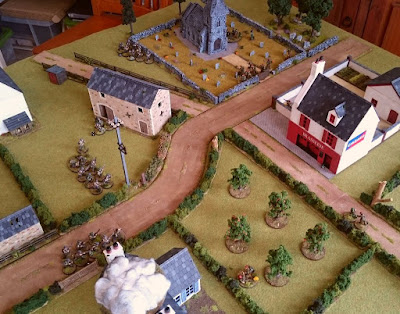 A mini-battle for the church yard begins with the Germans (regulars) fluffing up their shooting as the SMG armed Paras blaze their way between the headstones. 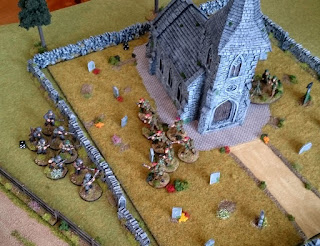 Amazingly, this combat went to second round before the Germans were annihilated. But the remaining Paras were few in number indeed. 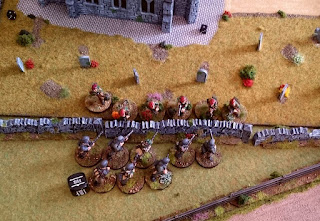 As the last shots were fired the embattled Paras were forced to withdraw. It was a narrow victory for the Germans. What a game! In the early turns the Germans were awesome but the loss of the Stug and mounting casualties/pins meant that the Paras were firmly back in the running for a couple of turns before yet again the Germans gained the upper hand.

Another superbly entertaining and thoroughly enjoyable game of Bolt Action with Orange Dave. Thanks buddy! :o)

So... Our campaign sees the 6th Airborne's bridgehead in real peril. More German armour is heading for this area and it's still some hours until the second 'big lift' for the Allies. Perhaps the Paras will launch a daring counter-attack to try to halt the German steam-roller?
Posted by The Wargames Table at 18:36 7 comments:

Yes, the re-basing continues. Here's a couple of officer types (Curteys Miniatures) riding through the desert. It's not all re-basing though! Here's the next batch of Legion ready for some varnish. Wanted to post these as with the holiday season fast approaching they'll have to wait a little while for their shields ;o) 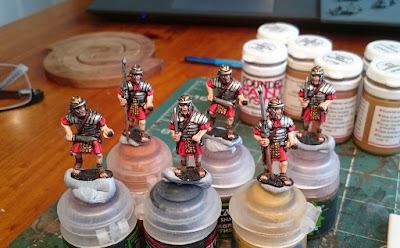 Cheerio!
Posted by The Wargames Table at 14:47 5 comments:

A while back I looked at re-basing my Romans to give them a more sandy-based theme. I've now also decided to give them magnetic bases to make storage easier. So I needed to add suitable movement trays. Here's the next unit, 14 Auxiliaries.

I'd like to offer a little tip about making movement trays... In the past I've bough them ready assembled and then trimmed steel 'paper' to fit inside, then added texture to the edge. However, sometimes this has resulted in a badly fitting, slightly wonky, piece of steel 'paper' (which just annoys me) or perhaps the texture has strayed within the bounds of the tray. Not a big deal to fix but here's my new approach.

Buy the trays unassembled, that is (as shown below) the rim is left unglued. 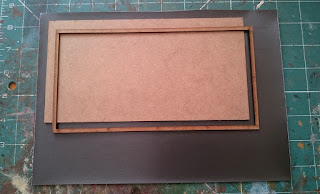 If you already have the trays then it's simple to slide a modelling knife between the rim and base - just take it steady!

Next, cut a piece of steel 'paper' that is slightly larger than the tray base. I get mine from Tiny Tin Troops - highly recommended. 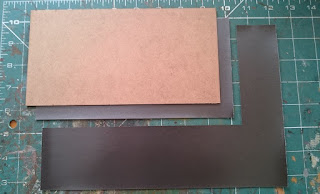 Peel off the backing paper and firm press the base on. Take care to leave a little overlap around the edge. Give it a minute or two to properly adhere, then trim off the excess with a modelling knife. This gives you a very neat finish.

Next, decorate the rim. I use PVA glue with some fine grit. Paint to match the bases. You may also want to add a little static grass or some tufts. Both the grass and the tufts can be dry-brushed with a light cream colour (e.g. Foundry Boneyard light) to enhance the arid look of the bases and movement trays. 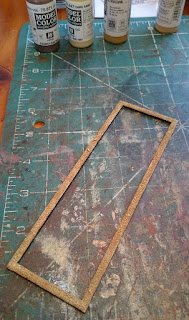 Then it's just a matter of gluing the rim on to the base. I used a few tiny dabs of super glue. Hope that's a useful tip.
Posted by The Wargames Table at 13:36 1 comment: