My social calendar has been pretty hectic recently but somehow I've still managed to squeeze in a bit of terrain building! I already have some roads that are about 3 inches wide but I wanted to add some narrower roads, i.e. lanes or tracks if you prefer. 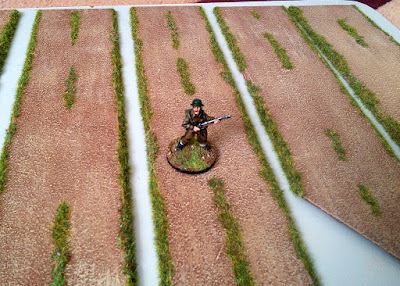 Incidentally, I need these for the next game in the Normandy campaign - this provided the real spur to make them.

As with my other roads, it all starts with a 300mm x 300mm cork tile, 3mm thickness. My tracks are about 2 inches wide so I simply cut a number of strips, plus a couple of angled sections so that it could join the main road at a variety of angles. Trim the edges to about a 45 degree angle to better help them blend in to the table. 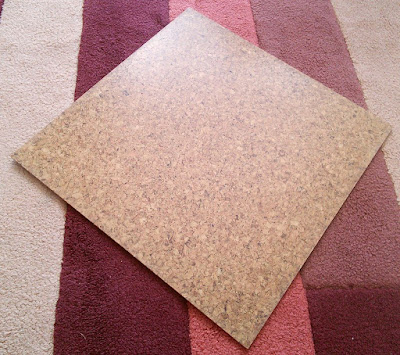 Painting: Texture the cork with fine masonry paint (add in a little fine grit for extra texture if you like). Drape the strips over thin paint brushes to prevent any curling as it dries. Then base coat with Americana Milk Chocolate, followed by dry brush highlights of Americana Honey Brown then a light cream colour, B&Q Harvest Field (DIY store tester pot) in this case. 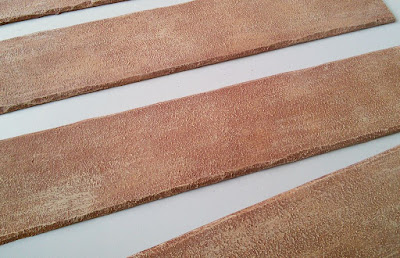 The final stage is applying some flock to the edges and a bit in the centre. I used two different colours of grass, but that may not be clear in the photo. 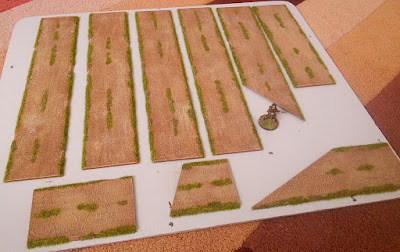 To follow this is the bocage ... I need this as the next campaign table also includes a sunken lane. Thanks for looking :o)

The Paras were initially repulsed in game one of the campaign, so we've moved forward a few hours on D-Day to just after the initial Allied foothold was gained on Sword Beach. It was imperative that the first forces to arrive quickly neutralised the beach defences and pushed inland. Our game is just one such Push Inland (Battleground Europe - Scenario 5). To fit our game (and to be honest, the forces we have available) nicely in to the campaign we’ve devised a vaguely plausible ‘what if’. The village that Steve and I will be attacking is going to be Hermanville. It’s just half a mile inland from Sword beach and was officially captured by late morning on 6th June 1944.

Now, as you'll see we've had to "adjust" the forces slightly from exactly those that would have been there on the day - this is simply due to the fact that these are the figures we have available ;o)

Troops of the 3rd infantry division took this route inland towards Caen. I can’t find any info about exactly which units took the village, so Steve’s chaps will be 2nd Btn Royal Warwickshire Regiment.

How to fit in my Paras though? Well, 7th Btn Parachute Regiment was originally intended for Operation Tonga (capturing the bridges on the Allies eastern flank) but Pine-Coffin’s men were very badly scattered. In fact many of these chaps helped reinforce the 2 Btn Ox & Bucks at the bridges during D-Day. So they’ll be helping the Warwicks take the village.

Mike kindly hosted the game at his house - many thanks for the tea and biscuits too!

As it was such a fun and absorbing game, the photos are not quite turn by turn but hopefully you'll get a flavour of the action with the key events.
Steve and I decided to keep very little in reserve - we both wanted to put pressure on the Germans right from the start. Here are our forces beginning their advance.

My force was basically a reinforced platoon of three sections, a mortar, a Vickers, sniper, flame-thrower and an armoured car for that extra bit of punch.
Steve also had a similarly reinforced platoon but with a mighty Churchill in support. Shermans might have been more appropriate but this is Steve's favourite tank so he simply had to use it.
Early in the game Mike brought on his Stug to try to knock out the Churchill. The ensuing duel lasted for much of the battle providing some fine moments of entertainment. For most of it the Stug had the upper hand but the shots kept ricocheting off the Churchill's heavily armoured skin. Eventually the Stug was knocked out.

Whilst much of Mike's force weren't the finest the Wermacht could offer, he used his few elite troops to excellent effect, pouring shots in to the oncoming British Paras and forcing them to halt their advance and use a turn to rally off a heap of shock.
Here's a wider shot of the Allies left flank. With the Germans accumulating shock, the Paras make the best of the cover to close in on the buildings.
Steve's troops in the centre were keen to use the slow moving Churchill as cover whilst a section on the flank rushes towards the barn, with the Vickers helping to keep the German's busy.
Mike brings on a couple of squads of regulars to reinforce his centre as the Allied artillery barrage (note the target maker on the crossroads) continues to be delayed.
As I mentioned earlier, the Stug's shots were bouncing off the Churchill but that did mean that the Allied behemoth was accumulating shock. Steve tried to activate the tank and rolled the dice for the command test ... however the crew had other ideas! It was FUBAR - the crew rapidly shifted in to reverse and gunned the engine ... what they were not aware of was the Lieutenant standing right behind them! We treated this as a tank assault as there was no way the officer could see what was going on. Steve rolled for the morale check on his leader - thankfully he was as cool as a cucumber and dived out of the way.
Back on the left, our elite forces traded shots but it was slowly going in favour of the red berets.
With the tankers taking a short break, the infantry got on with the job. On the right flank Steve's foremost section has reached the barn.
Couldn't resist this little picture with the sun casting a dramatic shadow on the barn.
The next few pics are a bit 'shonky' but we simply couldn't bear to shut out the lovely sunshine! Anyway, with Mike's right flank thinning out rapidly, the Paras bring up the flame-thrower team.
The plan was for the flame-thrower to get in to the now empty building and use it to launch a surprise attack on the Germans in the graveyard. The other Para sections would try to keep the enemy busy by pouring yet more shots in to the enemy.
Steve also wastes no time in rushing forward with his men to claim the village!
The flame-thrower team used the house as cover from which to hose the Germans in the graveyard. Those hardy fellows took two blasts (along with plenty of LMG shots) before they fell.
A special mention must go to Mike and his Panzershreck team (sorry no photos!). They very boldly pushed forward to get within range of the Churchill but the shot missed. Of course, next turn Steve shot everything he could at the German tank-hunters!

With time pressing we wound up after 8 excellent turns of play. A clear victory for the Allies but Mike and his Germans had put up a very tough fight indeed!


Summary
An enormously enjoyable game with two splendid chums! It was a highly entertaining and enthralling game. The Allied win was a bonus. Our plan of giving the attackers an advantage (20% here) seemed to work but perhaps next time we'll consider reducing it to 15% or even 10%. The buildings held by Mike turned out to be something of a double-edged sword for his men. Superb cover against small arms fire but with both Steve and I packing some HE they could just as easily be death-traps as the shells blasted holes in the walls.
Posted by Matt at 11:24 15 comments: