I've decided to make some complete field tiles, as opposed to just putting hedge/fence around areas of the battlefield. I think it adds depth and interest - plus they're fun to build! This is what I've come up with.

If you're interested in finding out how I made it then please read on. It all starts with a piece of MDF 40cm x 48cm, 3mm thickness. I've sketched on roughly where I want the hedges and gates. Hopefully you can make out my scribbles in the pic below. 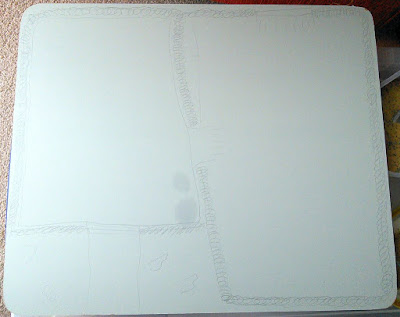 The next step is to apply some texture. These are the areas that will not be covered in flock or foliage. The left area will be bare earth whereas on the right I wanted more of a meadow effect. This is just a mix of small stones, grit and sand. 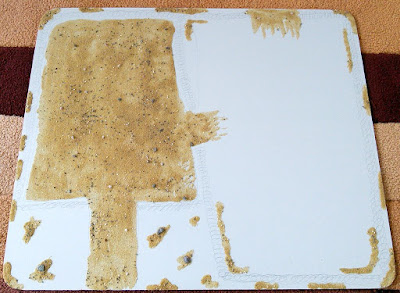 The remaining bare areas of the board are given a coat of textured masonry paint (to which I added some light brown paint). This gives a better base for the next stage; painting! Note British Para for scale. I've also glued a short section of branch to look like a tree stump. 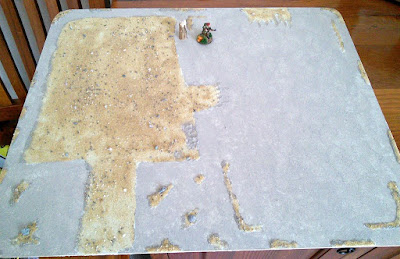 Two of the three 'openings' would be gated. These are from Warbases and I've added gateposts by carving some balsa. Looking at old pics (or just around the countryside now) you can often see wooden gates hung on substantial stone posts, so that was the effect I aimed for. It also makes the gates slightly more robust. 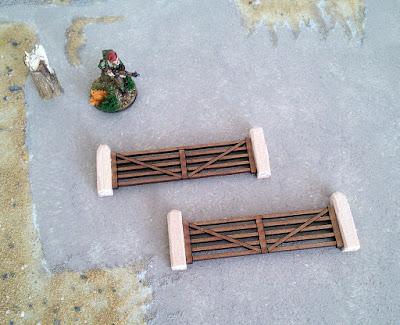 My initial idea was to have all of the field boundaries as hedge (using clump foliage) but as an experiment, and to add interest, I decided to try out a few short sections of rough wooden fencing and corrugated iron. 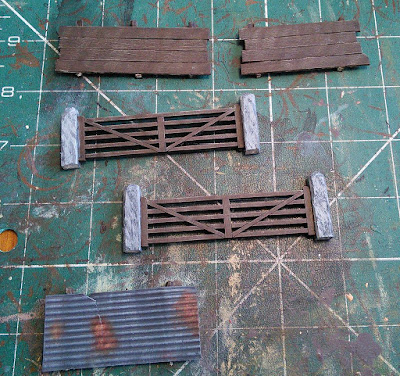 The fence sections are simply coffee stirrers with match-sticks for the posts. The corrugated iron is an off-cut of plastic-card, again with match-stick posts on the back. The wood is painted a very dark brown, then highlighted with a mid-brown, followed by a very faint highlight of light cream just to bring out the texture. The posts are painted using the Foundry Stone palette. The corrugated iron is the Foundry Slate Grey palette. The rust patches start with Vallejo Leather Brown, then Foundry Conker brown, then dark red, then a mix of ochre and red to get the orange areas.

Next, I attached the gates and fencing to the board. They're quite fragile at this stage so be gentle! The brown was painted on the base first to save fiddly painting after gluing them in place. 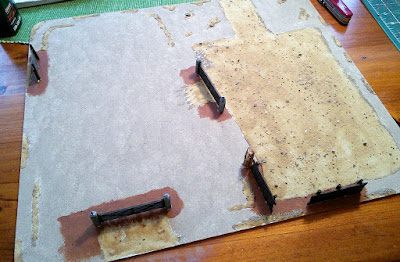 The rest of the textured base is covered in a mid brown. Here, I've used Americana Milk Chocolate (you can mail order these from Hobbycraft, for £2 a 59ml bottle). You could also try your local DIY / hardware store to see what tester pots they have. 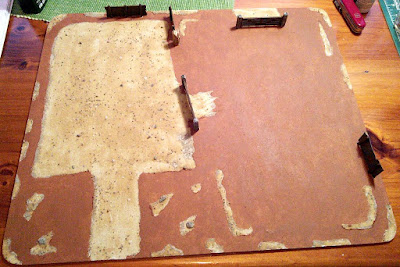 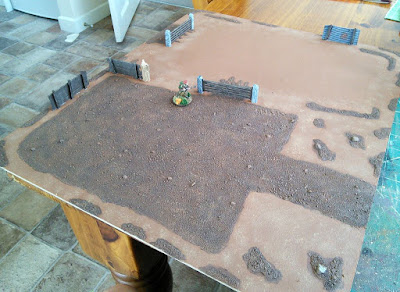 Further highlighting on the sandy areas with Fawn Brown then a very light dry-brush of a cream colour (DIY store tester pot). 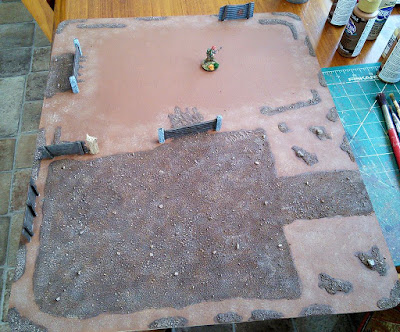 Next, pick out the rocks and some larger stones using Foundry Slate Grey and white. 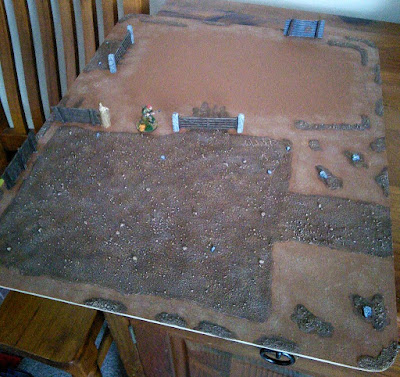 Now the tile is ready for the flock and grass. Hopefully you can see that I've used a variety of colours to give a good contrast and perhaps add a bit more realism? The little 'paths' around the edges have been left bare so as to make it easier to attach the clump foliage for the hedges. Try to avoid these being too straight. 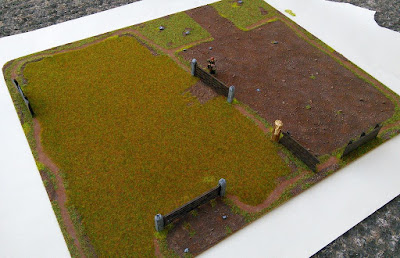 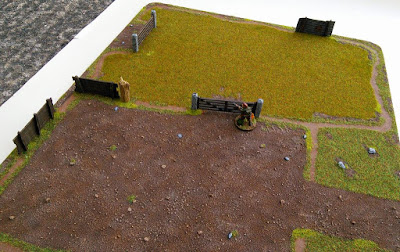 Here the clump foliage (Woodland Scenics FC57/58/59) is glued in place. I use all purpose glue, but a glue gun would be useful! Start by adding the larger pieces so as to get the basic shape. 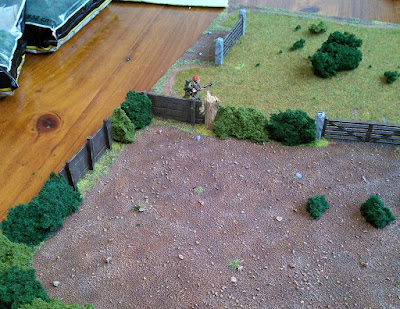 Then I add lots of smaller pieces. This makes the hedge a little stronger plus it helps to blend the colours together better. Here's the completed hedging. 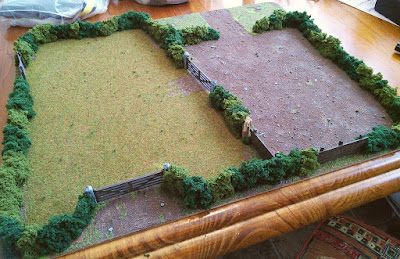 Finally, I apply some tufts and flowers. 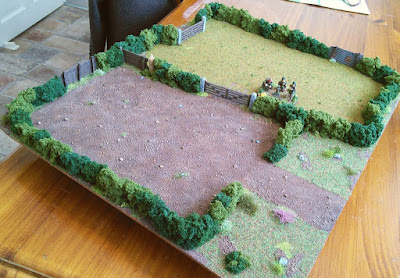 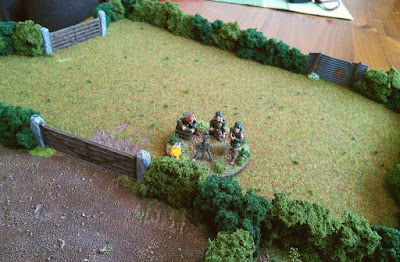 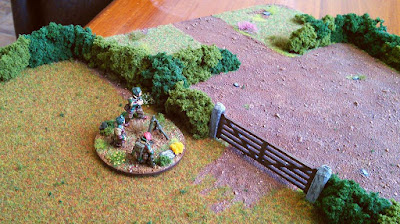 I didn't quite get the field tile ready for the most recent game in our Normandy campaign - an absolutely brilliant 3,000pt+ battle between Mike, Steve and me - more on the that soon!

I've also got some cornfields ready to go thanks to my beautiful girlfriend Emma! That's 60cm x 90cm for just £6 (from Aldi) :o) 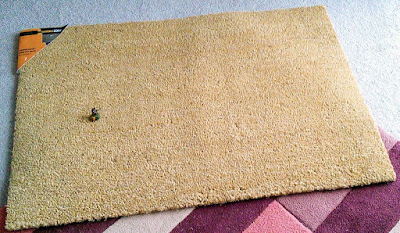 I've been thinking about making some bocage for a while now and have seen a number of excellent examples on t'web and at shows; so I thought I'd try out a small test piece to see if my ideas were okay. It's simply a thin strip of blue styrofoam glued to a piece of card (to protect the edges). I've shaped the foam to give more sloping sides then applied a good layer of gritty sand.

The earth colours are my usual recipe followed by a mixture of Woodland Scenics clump foliage much like the hedges I made a couple of years back.

Further pieces will have more tufts and flowers plus incorporate tree stumps, bushes, fencing, old bits of farm junk, etc. Longer sections will allow for a greater variety of height too - some of the real bocage is 15-20 feet or more! But this was just a 'proof of concept' so I kept it quite modest. One of the future Normandy campaign games requires a sunken lane leading in to a village, so a few feet of this should do the trick nicely!
Posted by Matt at 21:49 9 comments: