It's the last weekend in January so it must be time for the Crusade show, hosted by the Penarth & District Wargamers! This year there was a new venue and IMHO it was a massive improvement. The show itself was superbly organised and the club members were hugely helpful in terms of loading/unloading, etc.

As with many wargames shows there were a number of re-enactors. This fine fellow, from the 41st Regiment of Foot, was a pleasure to chat with. Colin and I couldn't resist playing with his musket!
The show itself was fairly busy throughout the day and it was a real pleasure to catch up with some friends (Hi to Chris, Stu, Scott, John and Dad-John, etc!!). It was also good fun to wander around and have a chat with a few of the traders; having done quite a few shows now you really do see how it's a community of its own!

I managed to have a quick wander around with Chris Harris (see his excellent YouTube channel here) so here's a few pics of games that tickled my fancy.

First up is "What a Tanker!" from Too Fat Lardies. Chatting with the Lard Islanders it appears they've used the CoC dice mechanism to manage the manoeuvring of tanks. It seemed quite detailed (e.g. keeping track of whether your main gun was loaded and with what kind of shell, how far your turret could rotate, etc) but plenty of people were playing and having fun.
The Skirmish Wargames Society were playing WHFB using 54mm figures. This was very impressive and the photos alas do not really capture the spectacle. 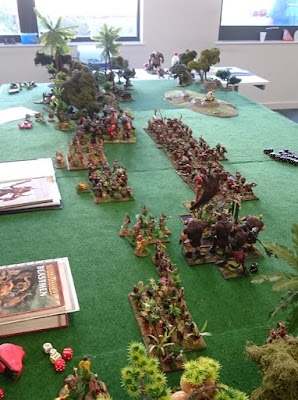 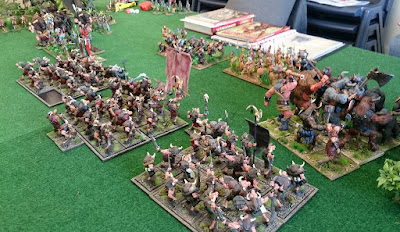 One game that I thought was stunning was this one, set in the French Indo-China War - no, I didn't know much about it either!?! The level of detail was incredible! Lots of little vignettes, etc.
The show has a good range of traders too, although I bought very little this time. I thoroughly enjoyed chatting to the gamers and modellers who stopped by the Charlie Foxtrot stand.

It's game six of our campaign to recreate the allied advance in to Sicily and north across Italy. With three Axis wins and two Allied wins so far it was all to play for. This scenario represents the Allied attack on a section of the formidable Gothic Line.
The above pic shows the field of battle. There are three distinct lines of Axis defence, each with a bunker. This scenario has three 1,000pt reinforced Allied platoons, commanded by Orange Dave, Mike and Steve, facing a single 1,000pt reinforced Axis platoon that has had the opportunity to dig in and lay some minefields.

The Germans (me) were mainly an infantry force with plenty of LMGs backed up by a tank and some light artillery. The Germans deploy first then the Allies attack in a series of waves. The objective was simple... breach all three lines by capturing the bunker in each line. The Allies have 10 turns to do this.

What a fine bunch of fellows, L-R, Steve, Mike, Me and Dave.

The opening couple of turns were fairly quiet with the Allies bringing on lots of transports (a total of 11 vehicles in all!) whilst the German front lines opened up but with relatively little effect.


Turn 3 was where the action began... The Churchill fired at the distant Panzer IV but missed, the return fire was deadly accurate! The Churchill brewed up in fine style. This had the effect of delaying the advance by several wheeled vehicles on that flank due to the barbed wire.


Mike had brought his AEC up to support his advancing infantry and it could now draw a bead on the Panzer. One carefully aimed shot later and the Panzer was toast and the Allies heaved a sigh of relief as the problem of “Tiger Fear” was gone. But… just a few dice later and Mike threw his arms up with a shout, realising that he’d got slightly muddled with the stats for the AEC. Being a thorough gentleman he explained his peccadillo; the shot would not have penetrated the Panzer’s armour. So off came the blast marker and back went the turret – along with a groan from the Allies as they realised Tiger Fear was still in effect!

Dave had previously deployed his 25lb-er so now set his sights on the restored Panzer… and promptly rolled a six! The weaker top armour of the mighty fighting vehicle was no problem for the shell and the tank was blown to pieces (again). Once again the Allies heaved a sigh of relief.


The second line of German defences had a machine gun team in the bunker but they were soon wiped out by some very concentrated fire on the bunkers. The Allied vehicles (which the Maxim couldn’t damage) rolled up to almost point blank range and hammered the bunker. It's worth pointing out here that the bunkers had the special rue "shoddy construction". They were made by forced labour and were not as tough as conventional bunkers; offering -3 cover rather than -4, so at point-blank range and no other modifiers, attackers could hit on a natural 6.

There was a veteran Grenadier squad in the sandbagged emplacement next to the bunker so they re-deployed in to the bunker to avoid it falling uncontested in to allied hands.

Again Dave sent in his Maori troops – with predictable results. Although my very shonky dice rolls at the point were probably the real issue!

In the shot above you can just see some of the AFVs that had been hammering the bunker prior to Dave's assault.

Over on the other flank Steve was rolling forwards, using his tracked Bren carriers to clear the wire and allow his Jeeps to bring an MMG forward to pour fire on the third line.

By turn 6 the second line was firmly in Allied hands and they were bringing pressure to bear on the third and final line. I was down to three units by this point so the dice bag had about 25+ Allied dice and just 3 of mine… It was only going to go one way. I had two slightly battered squads of Veteran Grenadiers and one piece of light artillery left.

The Allies rolled inexorably forward, letting rip with just about everything they could. A combo of Steve and Dave took the final bunker with one turn to spare! Victory to the Allies – the Gothic Line had fallen.

Well, that was an absolute corker!! A splendid game played in fine gentlemanly spirit and providing plenty of entertainment too. A fitting end to what has been a superb campaign. My thanks to Dave for organising the campaign and also my thanks to Steve and Mike for joining in with the finale. Here’s to many more excellent BA campaigns in the future!
Posted by Matt at 10:35 8 comments: