It’s that time of year when we as gamers tend to look back at what we’ve achieved and then waffle on about future plans for new armies, grand scenery projects and glorious conquests!!! Well, I’m no exception ;o) so here we go...

What have I achieved this year?

Gaming
I’d definitely like to get some more regular gaming in (although Jan and Feb are already looking busy!) with Dave, Steve, Mike, Rob, Paul, Colin, etc. This is going to require quite a bit of careful planning and time management.

Completing Ongoing Projects
Inspired by Steve’s sterling efforts this year in getting projects finished I think I may try to do something similar. I don’t really need to buy much – except maybe some more paint & brushes.
Scenery
This will be high up on the list too! I have some items to paint for others (I will get them done Paul, honest!). Plus, there are several CFM kits that I plan to add to my collection.

Painting
Increase my painting rate (but c’mon we all say that don’t we?) – this ties in nicely with getting projects completed.

Competitions/Tournaments
A couple of friendly competition/tournament weekends would be ideal!

Shows
Go along to Penarth, Plymouth, Legionary (maybe) and Bovington – others too I expect. 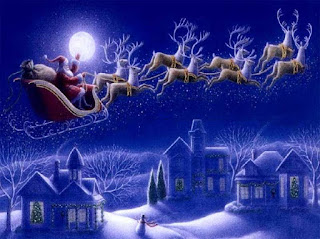 Best wishes to you all for a peaceful and joyous Festive Season!!
Posted by Matt at 21:18 7 comments:

My Charlie Foxtrot Models Brasserie kit is complete! As I mentioned before, my intention was to make a 'tile' with outbuildings, etc. Here it is. The back garden even has a little fruit & veg patch. 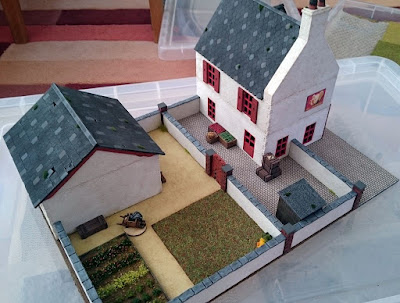 I've added some signs to both the café and the outbuilding. I've also placed some of the bits and bobs I posted recently. 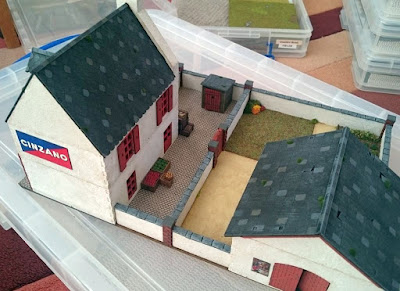 The basic idea is that the tile can be placed on a corner or junction. 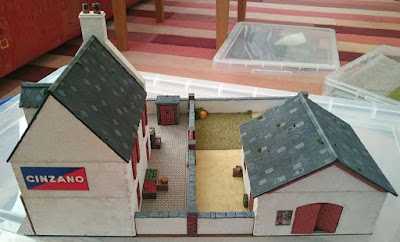 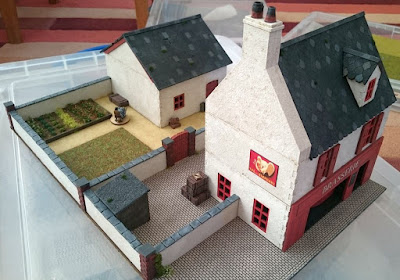 Here are a few shots of some of the extra components. First the large shed or outbuilding. 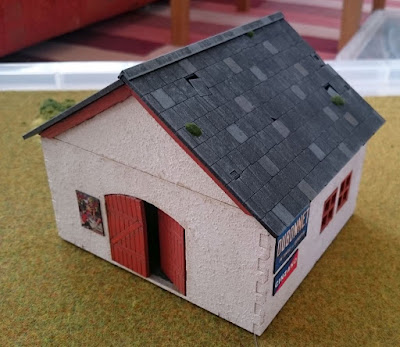 Pics of my brasserie can be found here. A couple of signs/adverts give a nice French theme. 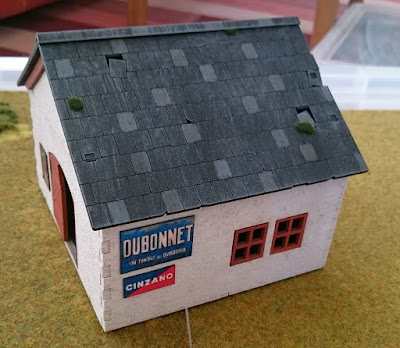 Add a bit of mould and lichen on the roof! 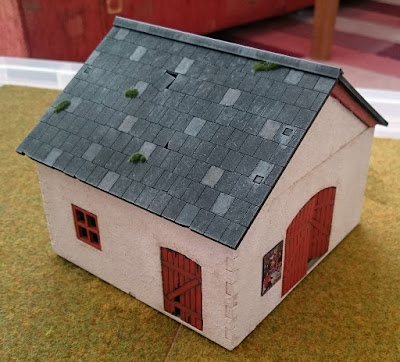 Every café needs a suitable convenience... an outside w/c. 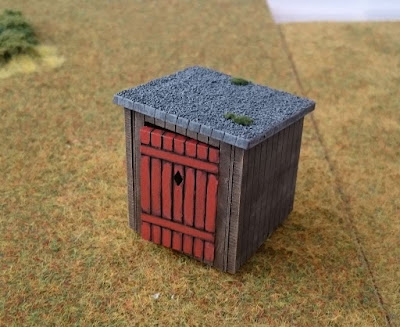 Here's the tile without the buildings or clutter. The brick piers and gate are from Charlie Foxtrot but pretty much everything else was scratch built. The walls are foam-core with individually carved tiles made from plasticard. 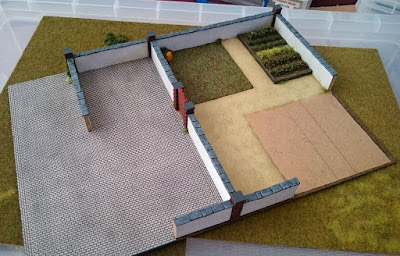 A closer look at the garden. The paths are just old masonry paint given a sandy/gritty paint scheme. 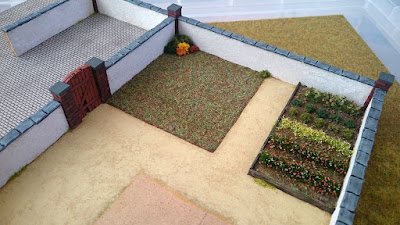 A couple of pics without the scenic clutter. 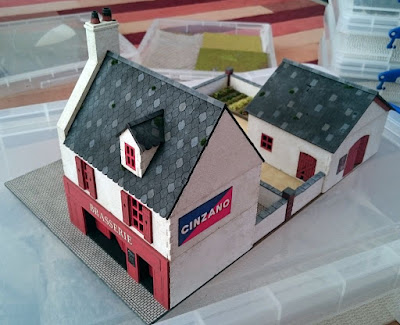 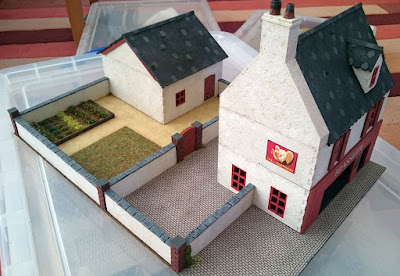 I've tried to strike a balance between a truly realistic looking model and a good piece of wargaming scenery. I could have added all sorts of extra scenic items and clutter but then I'd have struggled to place my miniatures in the terrain.

I hope you've enjoyed these couple of articles!
Posted by Matt at 20:23 6 comments:

Sunday 27th November saw the LBWS stage the Reveille wargames show in Bristol. Colin of Charlie Foxtrot Models kindly asked me to help out on the stall for the day... So here we are... The "CFM Twins" :-D

The venue and thus the show is a relatively small affair but everything was well organised with plenty of friendly people to help out. The traders included a few bigger names (always good to see!) such as Warlord Games, Magister Militum and Colonel Bill.

Scarab Miniatures were there too (good to catch up with you Rob!) with a demo game of the excellent Zero Hour rules run by Alan and Nigel. Here the Germans have a lightly defended trench with plenty of Stormtroopers waiting off table ready to counter-attack. 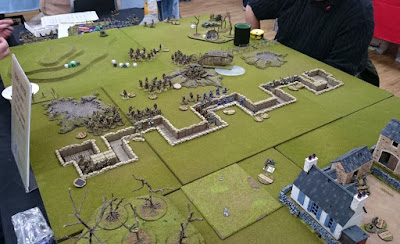 The British (with some French help) begin to take the trenches! 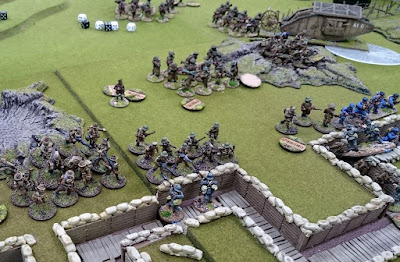 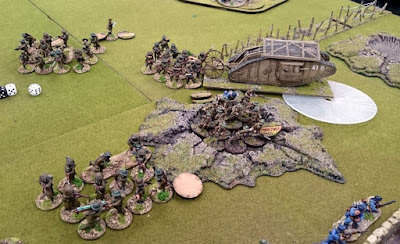 The game concluded with a solid win for the British as the Stormtroopers were smashed by overwhelming British artillery.

Sean from Little Ninja Painting was there too (Hi buddy!). Here's a couple of pics of his superb work! 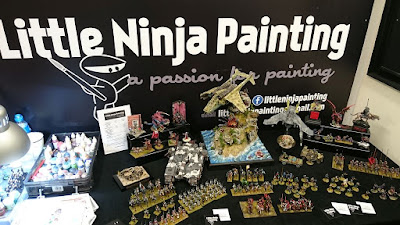 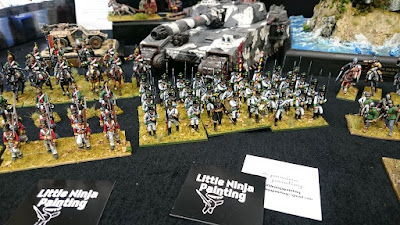 This table caught my eye in a very nostalgic way... The history of wargaming project showed a game played with 'flats'. The game generated plenty of interest through the day. 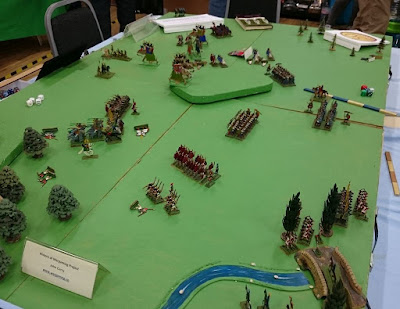 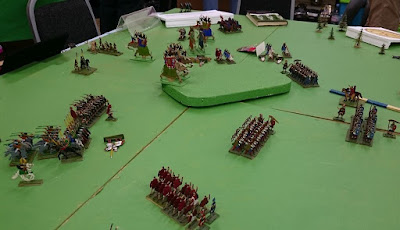 All in all a lovely day out catching up with friends, chatting with gamers and generally relaxing at a very friendly local wargames show.
Posted by Matt at 10:02 No comments: