The new second edition of Bolt Action sees the addition of templates for things like HE, so Colin has produced a superb set of templates and tokens (available here) to aid smooth game play. Here's my (slightly customised) set :o) 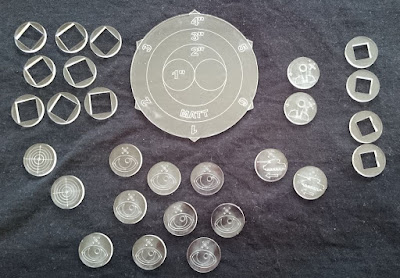 Here are the 'turret jammed' and 'vehicle immobilised' tokens. 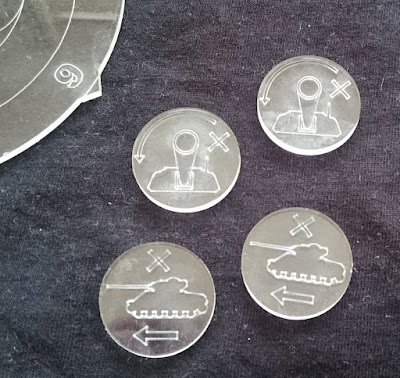 These are the 'snap to action', 'air strike' and 'hidden' tokens. The snap to action token allows you to clearly note which units are being commanded by putting the newly drawn order dice in the token. No danger of muddling them up with units that have already been given a dice. 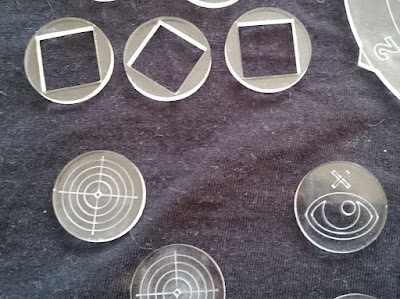 Here is the blast marker template. Note the double 1" token in the centre, just like it's shown in the diagrams for HE in the book. 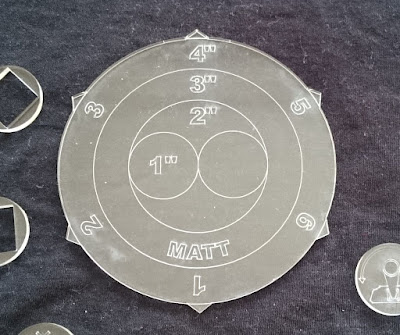 The set also includes dice holders for continuing fire weapons such as mortars - helps to avoid the dice being picked up during play.

I like to be able to decorate my tables with a few extra little scenic items to help give the impression that the buildings are 'lived in'. Here are a few I completed very recently.
They're a mix of resin (Ainsty and Grand Manner), plastic (Tamiya 1:48) and metal (Foundry) figures.
The paint scheme was simple block colours, a bit of wash then some highlights. The oil drums were just VMC Russian Green. I may base these as a little vignette. Think I might get some more too! They'd make a great little objective marker.
A couple of my buildings have proper gardens so I thought a wheelbarrow for the gardener might be a good idea. Clearly the owner of this one enjoys a glass or two whilst trimming the hedges!! 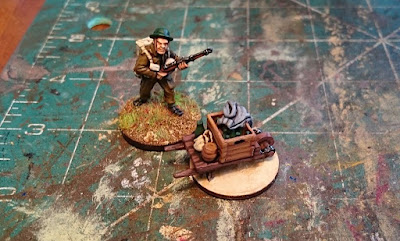 I've based it to match the paths on the buildings with gardens. Nice little figure I thought. That Tommy has his eye on the crate! 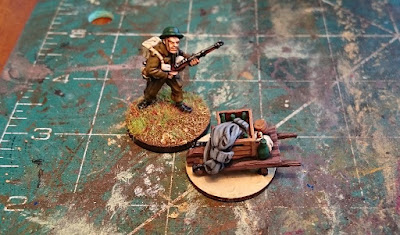 I've almost finished the Charlie Foxtrot Brasserie so will post that up soon!
Posted by Matt at 13:07 3 comments:

At last I've finally got my grubby paws on a copy of the new rulebook!! So I thought I'd publish a few of my thoughts on the latest incarnation of what has become pretty much my favourite game. 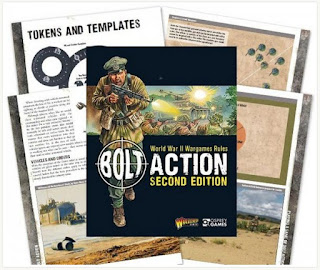 There's a superb video from Chris Harris on YouTube channel here: https://www.youtube.com/watch?v=GjTgxG-RgDk (well worth subscribing too!!)

There's also a demo game from Beasts of War here: https://www.youtube.com/watch?v=4aJGzJDiKMg not the most exciting viewing ;o) but quite instructive.

The production quality of this hardback book is exactly what you'd expect from Warlord & Osprey. Sumptuous colour photos, superb artwork and top-notch graphic design; it's a pleasure simply to browse through it.

In no particular order, here are some highlights of the new rules:-

Orders
Rally - Troops can now rally on their basic morale rather than including the effect of the pins they're trying to shake off. This is a good move as troops with many pins were effectively out of the game most of the time. Now you have a chance to get them back in the fight - they might miss a turn or two whilst they sort themselves out though - fair enough.

Down - Troops going down are now -2 to hit plus if they keep the Down order through to the next turn they lose D3 pin markers.

Ambush - At the end of the turn, if your ambushing unit still has its dice then you can either keep it in ambush (as per v1) or flip it to a fire order and take shot. Nice.

Officers
Officers can now activate the men around them. For example, a 2nd Lt is activated so he can immediately draw a dice for a unit (within 6") and activate them too. The more senior the officer the more units can be activated. This is a brilliant improvement! All to often I'd felt that officers in v1 were of too little use, occasionally offering a morale boost. Now they can actually lead their men and directly influence the battle.

Transports
These oft overlooked vehicles are now going to become more attractive I'm sure now that they can fire one weapon after moving - the rules assume that one the crew man the gun. So your SdKfz 251 can now drive forward, the squad can de-bus, then the vehicle LMG can pour shots in to any nearby enemy. All very cinematic and in keeping with the spirit of the game.

Tanks & Flak
Like putting a 50 cal on your Sherman to help hose down enemy units? Well think again, doing so will make your tank 'open topped' for that turn - after all some poor guy has to climb out of the turret and operate the weapon. Beware of then getting pinned by small arms fire!

HE & Templates
When templates for HE weapons were first hinted at there was quite a bit of whining on the interweb. Frankly I think this is a good move. I've never had issues with templates in other games and I don't foresee any issues with Bolt Action. A big bonus of templates is that it will encourage players to use more historical deployment and formations. I've often seen (and done it myself too!) troops bunched up in mobs rather than being dispersed in more linear formations.

HE & Buildings
In v1 how often did you look at your Sherman parked near a building occupied by the enemy and think "I'd really like to put a shell through that wall and give those naughty Germans a jolly big headache!" (feel free to insert your own aphorism there ;o)) Well... rejoice for now you can do exactly that! No 'to hit' penalty (aside from range/movement) and the troops inside no longer get the 6's to wound. Oh... and gun shields are a bit less effective too so I think we'll see more players putting their artillery in more cover - another nod towards improved 'realism'.

MMGs and LMGs
More shots and a greater range, what's not to like? Now paying 20pts seems a bit fairer for these weapons. The Hitler's buzz saw rule still applies so those MG42s will pack a whopping 5 shots.

All in all I think the changes add up to a much improved game that better incorporates historical details, but it's still a game though. There's plenty more so grab yourself a copy and give it a thorough read! Also make sure you check the weapons tables, etc otherwise you may carry on using v1 details.