SAGA - Age of the Wolf Campaign

At last!!! Orange Dave and I have got our calendars sorted and played the first two rounds of the club Saga campaign which brings me nicely up to date. My faction is a Viking War band led by the indomitable Magnus Håkonsson. I rolled for his traits and got "Learn'd" and "Hard Ruler" - both great for boosting my war band before and after battles, plus the special rule "The Conqueror". Magnus is clearly a man to be reckoned with!!

Dave has been busy painting some lovely Foundry figures. The photos are a bit shonky but hopefully you can see how good they are!

Game One - I decided to raid the territory of Dave's Warlord, the Anglo-Danish Leofstan the Bastard. The scenario came up as "Scout" so we both cautiously advanced in to an abandoned village. Now, it's been ages since I last played (that's my excuse anyway!) so I was a bit vague about how the game worked, but I soon picked it up.

Anyway, Dave's Warlord has a great ability to move two units with his freebie move so he was able to swiftly bring his forces to bear with superior numbers. My Vikings gave the Danes a bloody nose (metaphorically speaking!!) but with two Hirdmen units gone plus a unit of Bondi, my warlord signalled a withdrawal.

Post game we sorted out the campaign stuff. This went well for Magnus as his unit of Thralls were upgraded to Warriors and most of the casualties were replaced thanks to his traits.

Game Two - sorry no pics - was a simply ambush on a forest road. Dave's Anglo-Danes were ambushing. I sacrificed a unit of Bondi (and ultimately a unit of Hirdmen too) in order to allow the rest of my force to escape the ambush and head off in search of plunder. Again the post game campaign rolls were fairly good, giving Magnus a 5pt war band of 2 x 4 Hirdmen, 2 x 8 Warriors and 1 x 8 Thralls. Plus a campaign point in to the bargain too - a good start for my Norse Raiders!

A big thank you to Dave for coming over and sorting out a splendid introduction to Age of the Wolf. Really enjoyed it mate! :o)
Posted by Matt at 10:14 6 comments:

With the second edition of the Bolt Action rules almost upon us, Wargames Table chum Steve and I decided to have one more go with first edition! Steve would be fielding his beautiful First Corps Russians whilst I would once again be trying to stem the advance in to Germany with my Panzergrenadiers. Here’s the field of battle. 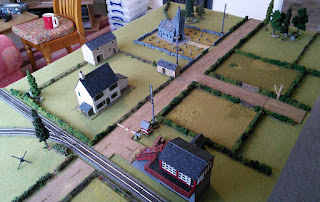 The scenario was simple: German forces must stall the Russian steamroller in this sector long enough to bring reserves up, however this can only be done if the crossroads remain in German hands. So, the usual 6 (or 7) turn game and the winner would be the one controlling the vital crossroads near the centre of the board at the end of the game.

Steve and I both decided to commit our entire forces in turn 1 ... no faffing around with reserves here!! First blood went to the Germans as my tank rumbled on to the table and took aim at the only viable target, the Russian sniper in the church belfry... Boom! 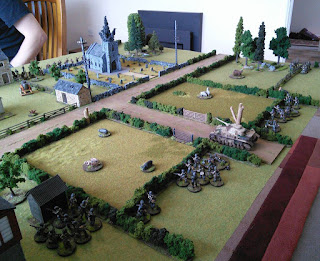 Steve had an alarming number of troops at his command! They begin to advance around the farm, through the orchard and across the church yard. 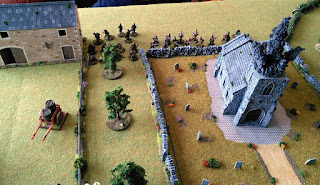 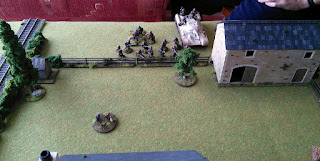 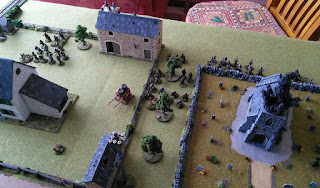 Steve took a shot with his tank against mine. The shell missed by a whisker, so rather than risk another volatile tank duel I pushed my Panzer forwards with the intention of blocking his shots to it and also being able hose down the advancing Russian hordes at short range. 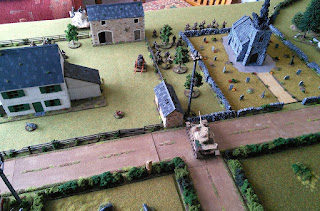 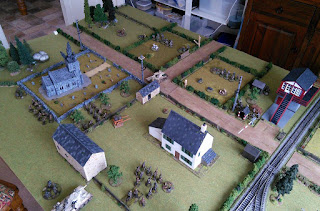 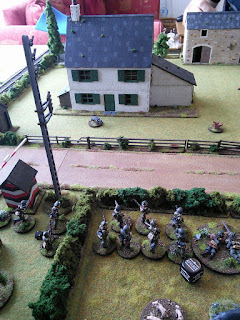 Amazingly they not only held but shredded one of the German squads in reply! What had these Russkies eaten for breakfast??

With my tank well forward my squads also pushed onwards to support it but not before a pesky (free) unit of inexperienced Russians managed to dodge the twin MGs and get close enough to plaster the Panzer with anti-tank grenades… Boom! Steve and I were both laughing our heads off! 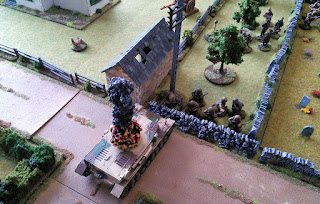 This left his tank free to roam around the table, backed up by fearsome SMG wielding tank riders, annihilating anything remotely German! 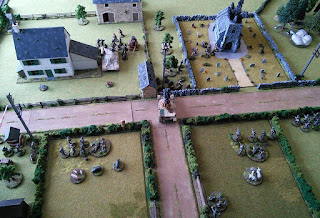 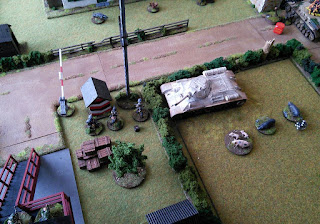 So, another solid victory for Steve and his Russians, and another superb game with plenty of laughs and more than a few dramatic moments. My thanks to Steve for a great game… and a superb chocolate cake! Looking forward to lots more fun with the new rules.
Posted by Matt at 12:16 3 comments: