I already have four 8 man sections* but looking in my boxes of toy soldiers I stumbled upon enough figures for another section. So on to the painting table they went! 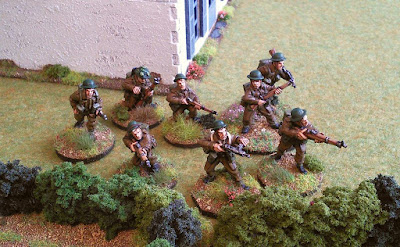 (*I know that sections are theoretically 10 strong, but I'm allowing for a few casualties)

The 'recipe' I use can be found under the Painting tab, see above. 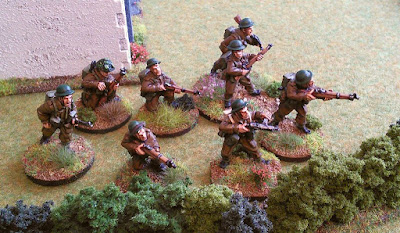 I especially liked the Bren gunner with the weapon shouldered and a look on his face that suggests he's having a good grumble about boots / officers / weather, etc. Hard to see at this scale but he has, honest!
Posted by Matt at 09:35 8 comments:

Another Saturday at Bristol Independent Gaming playing Bolt Action with Wargames Table chum Orange Dave!! This time it's game five of our Italian campaign. The notorious Monte Cassino!! The battlefield map is shown below.

Here's the table with all the troops in play. Dave's mega-hill does sterling service again!

I put my best troops amongst the ruins on Monastery Hill with a strong secondary force holding Hill 444. By the way - we both missed the rule about the battlefield being impassable to vehicles - doh!? 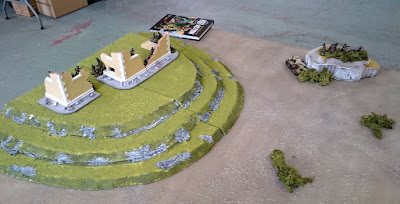 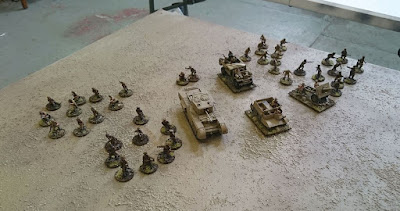 Turn 1 saw a general advance mainly on the north-eastern flank of the hill. The tanks exchanged long range shots but the shells either missed or bounced off. 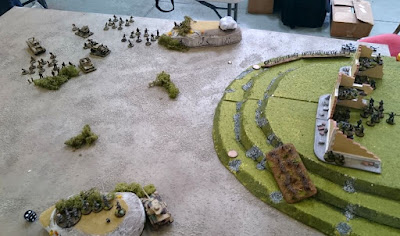 Dave had deployed some smoke in turn 1 and now it rather usefully (for the Allies) drifted towards Monastery Hill. Turn 2 saw a little more shooting from the longer ranged elements of each force along with more advancing. 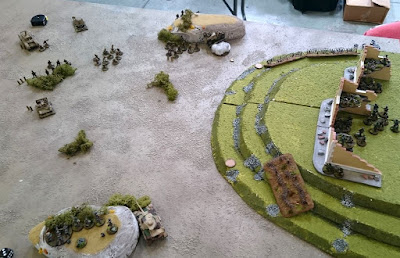 Here's the situation at the start of turn 4. Turn 3 saw the Allies gain a lot of pins as the well dug-in defenders of both hills opened up with pretty much everything they had. The Germans on Hill 444 were wiped out as they were closer to the Allies plus had less cover. 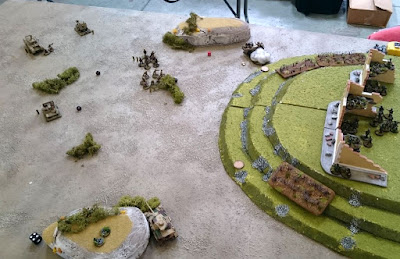 A closer shot of how Dave's truck mounted Maoris were able to exploit the drifting smoke. 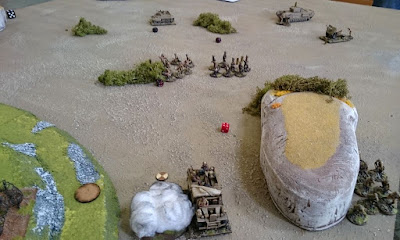 Turn 4 and the Panzer IV wins the tank duel as the Churchill brews up.

Turn 4 was particularly bad for the Allies. The Churchill blown to smithereens, the Indians in the centre wiped out and lots more pins on most of the other troops. Also hardly any damage to the troops occupying the ruined monastery. Turn 5 began badly as the smoke disappeared revealing the truck full of Maoris, plus the first couple of dice out of the bag were black not green... Dakka dakka dakka went the MG42s. 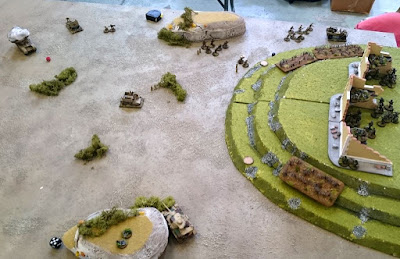 The brave chaps in that Bren carrier were stoically pouring fire in to the ruins so as to pin the Germans and give their comrades a chance to storm the hill. But the dastardly Panzer commander had other ideas .... "Hans... Bereit. Ziel. Feuer!!!" ... Boom!!! (once again I apologise to any German speaking readers for my terrible German language skills)

The brave Kiwis begin to ascend the hill. 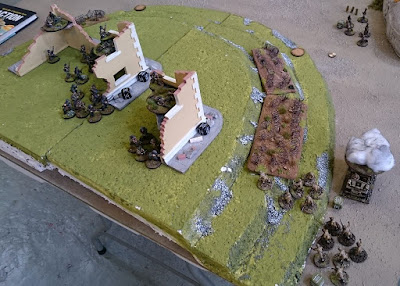 Turn 6 begins but the Allied attack has been shattered. 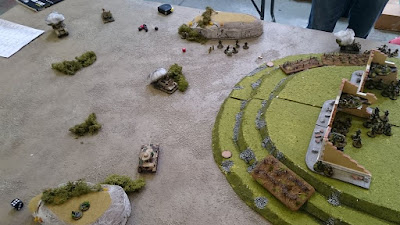 Undaunted the Maoris launch their assault... and By George they're tough fellas. They slaughter the veteran German troops in a hail of grenades and bullets. Take that Jerry!! 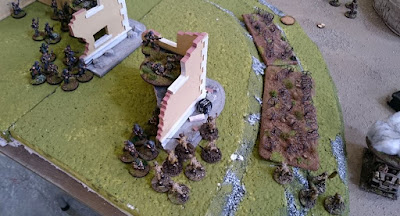 Turn 7 and it's almost over the for the attackers. The Maoris have consolidated into the northern end of the ruins but they are too few to clear the hill. 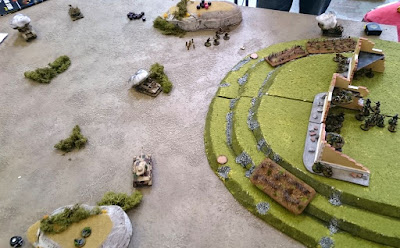 The last two turns were played out fairly quickly. The Maoris on the hill were annihilated by the combined fire-power of the squads still holding the ruins. Dave was not helped by the BA dice coming out of the bag very much in favour of the Germans.

As the dust settled we totalled up the VPs and it was Germans 18 and Allies 7. The win was not really due to any great skill on my part if I'm honest. Dave acknowledged that he'd made a couple of little fluff ups (such as using his 25lber and timing his advance). Nonetheless this was always going to be an incredibly hard nut for the Allies to crack. Still, it was laugh and Dave is always a pleasure to game with. My thanks for sorting out this scenario mate!!

So after 5 games it's Axis 3 and Allies 2 in the campaign. The grand finale will see three allied forces taking on the Germans behind the Gothic Line. That's 3000pts of Allies fighting 1000pts of Germans ... but Jerry does get quite a few bunkers and lots of lovely barbed wire. Should be a corker! Hopefully Dave will be joined by fellow Wargames Table chums Mike and Steve. Bring it on!! 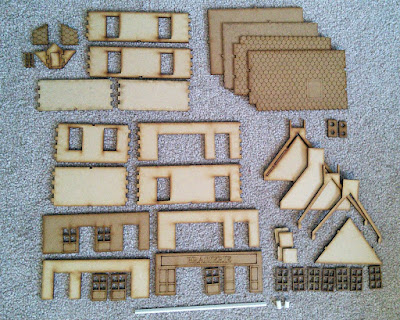 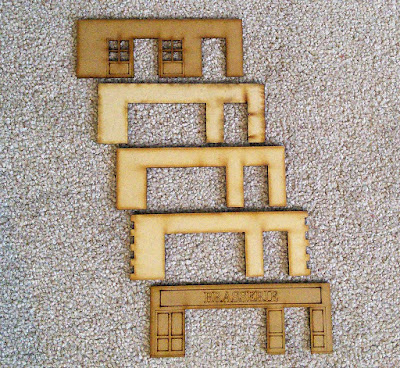 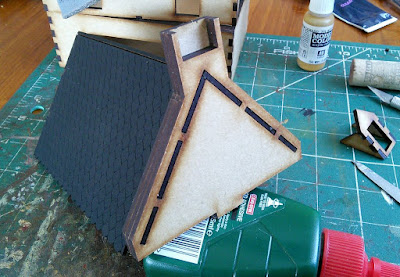 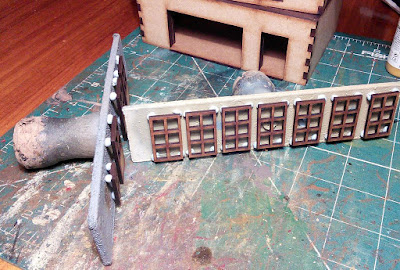 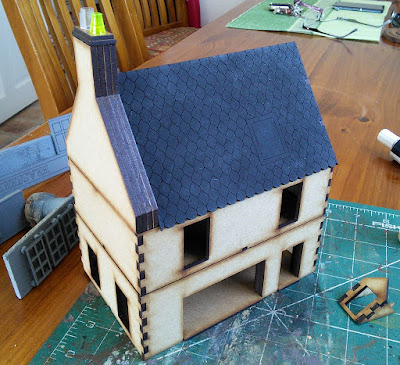 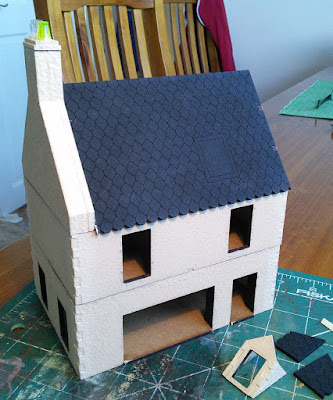 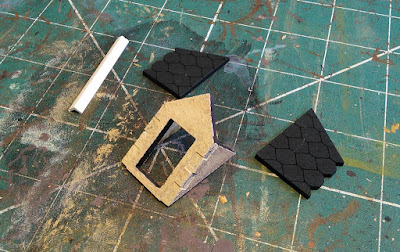 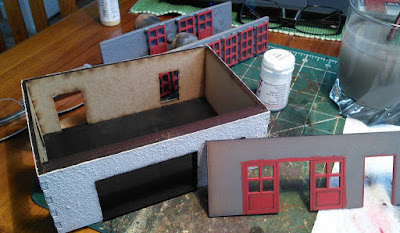 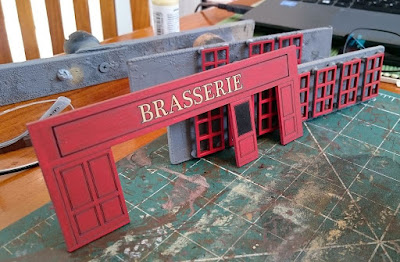 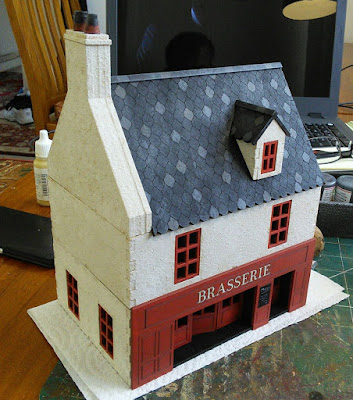 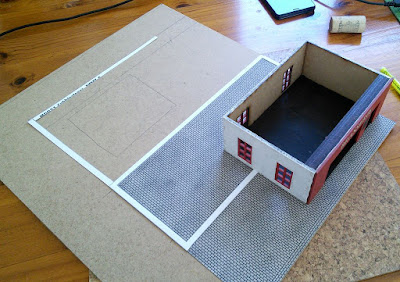