Private Perkins hummed gently to himself as he brewed his Lieutenant's morning cup of tea. The platoon had halted late last night and made themselves comfortable in a rather dilapidated barn. The old farmer had welcomed them by handing out jars of rough Normandy cider and fresh eggs. Naturally the men were delighted, though a few were probably feeling a little shabby as the day dawned cool and bright.

The young officer was poring over his maps as Perkins approached, "Here we are sir, a nice cup of tea," he said placing the steaming mug on the table. The farmer had even provided some fresh milk. "Eggs for breakfast sir?"

"Thank you George but alas there's no time for that," he said tapping the papers on the desk, "Message from Company HQ, they want us to push on and take a vital rail junction. Jerry is on the move. Reconnaissance suggests they could be Fallschirmjagers. So, be a good chap and let the Sergeants know I want them here in five minutes"

"Sir!" came the reply accompanied by a crisp salute.

Yes, Mike and I were battling it out again amongst the Normandy hedgerows. He led his formidable FJs whilst (for a change) I fielded my British regulars instead of my Paras. The game was to be a straightforward clash of reinforced platoons using a variant of Maximum Attrition scenario. To spice things up a bit we deployed in opposite corners of the table and extended the game length by a couple of turns.

My British would arrive from behind the farmhouse and signal box whilst Mike's FJs entered from beyond the larger farm complex. I was delighted to be able to use my Signal Box (Charlie Foxtrot of course!) and tracks for the first time.

The first couple of turns were pretty cautious affairs with both of us gradually moving men forward, both trying to turn around the flanks without exposing our men.

Mike was trying out a slightly different FJ list with fewer but larger squads giving a total command dice count of just seven. I had four main sections plus a variety of support including an armoured car giving me a whopping twelve dice.

First shot of the game went to my sniper who somewhat predictably missed! However my 3" mortar team were 'on point' landing a shell plum on top of the German MMG and wiping it out. Take that Jerry!! ;o) Undeterred, Mike's elites continued to push forward and started chipping away at the larger but less experienced British force.

The British artillery support was delayed a couple of times but I did get to move the aiming marker to keep up with the German advance. When it did finally arrive it just put a few pins on a couple of units. Still, it is a freebie.

In one of the superb cinematic moments from the game, Mike's Stug rumbled on to the table and let rip at my Bren carrier (with flamethrower crew on board). I had gambled that he would be more interested in dealing with my armoured car. The shell tore in to the lightly armoured Bren and set it ablaze. The crew promptly failed their morale test (hey, there was a flamethrower on board!) so they bailed out.

In another superb ‘movie moment’, my Lieutenant was activated but with only a pistol he couldn't do too much against the German squad behind the hedge to his front. "Excuse me sir, let me handle this," said the confident Perkins. He calmly took aim... and I rolled three consecutive 6's to pick off the MG42 in the squad. Very amusing!

However, the continued advance of the FJs was putting ever greater pressure on my sections. Mike's larger squads made them very durable, particularly when combined with their veteran status. Mike's troops advanced along the railway to draw a bead on the Lieutenant and his trusty bat-man. Poor Perkins was wounded so was ordered to the rear.

The Stug and armoured car had a brief duel but Jerry had the best of it as another shell tore through British armour like a hot knife through butter.

At the end of turn 9 the result was crystal clear. A solid and well deserved victory for Mike's FJs. This was a superb game of BA with plenty of drama and lots of laughs. My thanks to Mike for a great game played with the customary spirit of gentlemanly wargaming. Very much looking forward to a re-match.
Posted by Matt at 11:25 7 comments:

I've wanted to add a church to my Normandy collection for some time. Total Battle Miniatures do a beautiful church but at £60 it's way beyond my pocket! So instead I ordered up this from Hovels Ltd. Great value at just £13.50.

The casting was good with little trimming up required. The spire is a separate piece which makes storage a little easier. Make sure you give it a good wash before painting.

So that I could use it in different settings, that is as a standalone church or within a village perhaps. I decided to make a tile for the graveyard. The church could then just be placed on it. Again this would make storage easier. 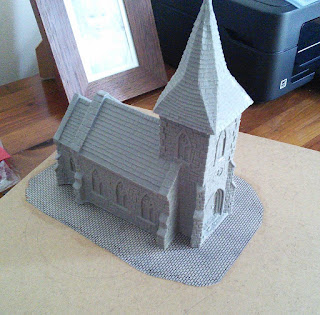 The paved/tiled area is just some good quality printed card I picked up from my local model shop. I've applied some textured masonry paint so that the edge blends in nicely, plus it makes for a good path. 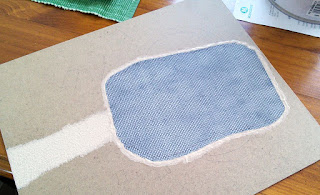 The area around the church will have a scatter of gravestones. 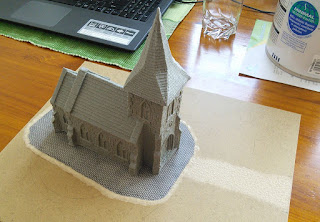 Painting the church was very straightforward. Undercoat with matt black spray, then apply successive drybrushed layers of Foundry Stone for the walls and Found Slate Grey for the roof. The actual effect is more dramatic than this picture suggests. They are quite different greys, honest! 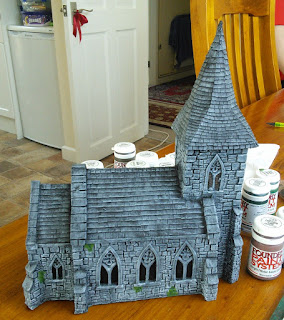 The door is just dark brown such as Found Bay Brown shade highlighted with a faint drybrush of a Foundry Boneyard mid. The patches of mould in the stonework are simply a watered mid green that is given a highlight of watered yellow-green. Thinning the paint lets the stone show through in places. 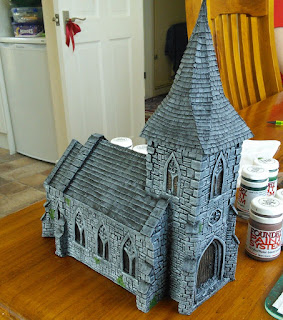 Some of the gravestone were old metal items that I'd had in my bits box. I especially like the one covered in ivy with a raven on top - from Essex miniatures I think? The rest were simply off-cuts of plasticard that I trimmed in to various headstone shapes. 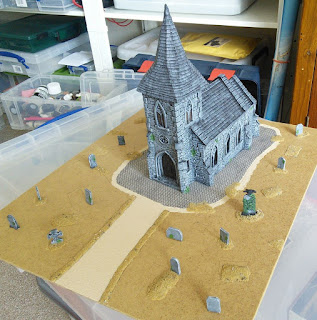 I decided to keep the gravestones quite sparse so as to make it easier to place and move figures during games. 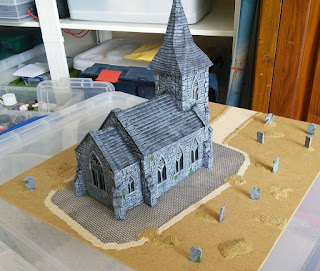 Here's the finished article surrounded by stone walls. I made the gates from some odd bits of balsa. The graveyard was flocked and then spruced up with a selection of tufts, flowers and clump foliage. 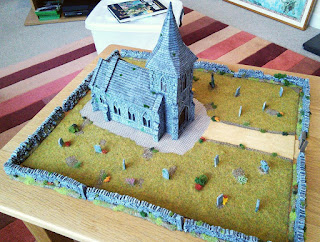 Battlegroup South recently staged their annual two-day show in Bovington Tank Museum, what a venue eh!? I also had the great pleasure of helping out Wargames Table chum Colin with his stand for Charlie Foxtrot Models – always great fun!


The show had a good range of games; historical, sci-fi and fantasy, 6mm to 40mm, etc. A couple really caught my eye so here's a few photos.

Gaming in the Shed - Game 2

So game two and it's time for some WW2 action... Bolt Action to be precise. Steve has some lovely First Corps Russians and I must say that these are really characterful figures... very tempting especially as I know a bloke who does a very nice line in Russian buildings! Anyway - it's late war and the Russians are pushing in to Germany, so I used what scenery I had to do a little rural scene. Here are the forces deployed at the end of turn one. Steve has put everything on the table whereas I've held one squad and the Panzer IV in reserve.

Now, I took a heap of photos at the start but only a few as we played. Mainly because I just wanted to get on and enjoy what turned out to be a superb game. So here's some more pics of the forces.

Right, on to the game... Steve's T34 made short work of the German squad that was behind the fence next to the stone barn. So on came my trusty Panzer IV but the gunner couldn't quite land a telling shot on the Russian tank, but he did immobilise it by knocking out the tracks. In response the Russian tank commander order his gunner to open fire ... with exactly the same result. So, it's turn 2 and the two immobilised but otherwise operational tanks prepare to blaze away at each other.

On my right flank I was giving the Russian squad by the farmhouse a good thrashing with my MG42s.

As the game progressed the Russian numbers began to tell. There just seemed to be so many of them!! The tank duel was hilarious. At the start of each turn there was a wonderful moment of suspense as the first dice was drawn - who would get to activate their tank first!! The T34 landed several hits on the Pz IV but couldn't penetrate the armour. The German reply was equally ineffective. It was all rather funny actually.

The weather provided us with an impressive and rather suitable 'soundtrack' for the game. Several big thunderstorms rolled overhead as our forces battled it out. The rain fell so heavily at times that I wondered if the shed might float away!

My Panzershreck team had to cross all the way from the other flank before they could (in turn six!) draw a bead on the pesky T34.

Alas the shot missed (by just one pip on the dice!!). The tank replied very effectively with it's hull MG. Scratch one 'shreck team!

Here an NCO from one of my squads seeks shelter behind the sentry hut. But in the distance you can just make out a Russian AT gun. With no other better target (AT guns are not particularly effective against infantry) Steve decided to put a shell in to (or rather 'through') the hut.

Boom!! No hut nor any sign of the hapless NCO. Note Steve's slightly smug arms folded pose in the background ;o) ;o) ;o)

That was pretty much the last shot of the game. Totting up the VPs it was 4-2 to Steve, so another close win for the host. Well done mate! :o)

The tanks had provided great entertainment throughout the game. German fire-power had really made it tough for the Russians to advance but in the end their numbers carried the day - but only just. Brilliant fun all round I'd say. Thanks again to Steve for hosting the games!
Posted by Matt at 18:08 5 comments:

As you will surely know it's 100 years since the Battle of the Somme began.

Let's take a moment to pause and remember those of all nations who fell on that day... and the many days that followed.

If you have the opportunity then I highly recommend a visit to this extraordinary and moving memorial. There is also a visitors centre that is worth seeing.

If you'd like a little more information then the BBC have a couple of interesting videos here and here.