Better Storage for My WW2 Troops

I've been having a very cathartic clear out and tidy up; and as part of this I've decided to re-organise how I've been storing my WW2 troops. I've ordered a bunch of Really Useful Boxes but in the mean time I picked up a couple of 4 litre boxes from WH Smith.
The figures (mostly individually based) were stored in the old GW cases with foam trays. Well protected but a bit fiddly. So, with some of the 'teams' already mag-based I decided to go the whole hog and mag-base the lot.

To line the boxes I needed some steel paper so on Easter Monday afternoon I placed an order with Trevor at Magnetic Displays / Coritani. Within about 15 minutes (I jest not!) I received an email from Trevor saying that the items would be in the post first thing on Tuesday morning. Sure enough on Wednesday morning the order arrived! You simply cannot get better customer service than that. A good price and excellent product too. Highly recommended! I already have their 0.8mm mag tape - that's very good too.

Here's the box lined with steel paper. I like the white finish as it makes it easier to spot particular figures in a crowded box.

In go the troops and, with some care, I gently give the box the "over the head test".... and no one fell out :o)

But as the boxes aren't quite ready I'll store them somewhere safe.

When I get the rest of the boxes then I'll be able to completely re-organise my gaming storage which is currently spread across a variety of plastic crates and cardboard / shoe / tool boxes.
Posted by Matt at 14:00 3 comments:

Having recently completed the Signal Box from Charlie Foxtrot it was pretty obvious that I'd need to sort out some railway tracks. So this is a "how to" post with some suggestions for building railway tracks for your wargames table.

I started with some pieces of track from the bargain bin of my local model shop - don't ask what the scale is as I have no idea - I just bought track that looked about right. As the very helpful lady in the shop commented, brand new track can be pricey so see if they have any 'off cuts' or second hand track. For example, a brand new set of points might cost around £12 but mine cost only £6 :o)

I began by dry-brushing the black plastic sleepers with dark brown paint. It takes away the plastic look and makes them look more wooden and weathered. This picture shows the unpainted underside and a 'painted' section, so you can see the difference.

I decided to base the track on some strips of cork tile. It's cheap(ish) and easy to cut. Remember the strength will be provided by the metal rails.

The strips had the edges trimmed to about 45 degrees to give a neater join to table. 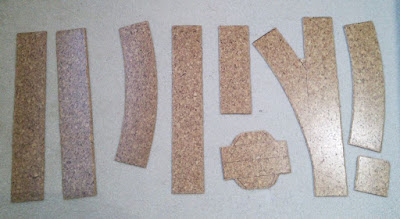 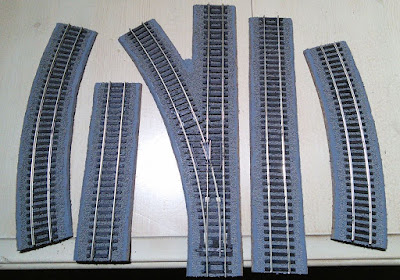 The edges (with no ballast) were then given a quick coat of cheap earth brown paint - another tester pot from the local DIY store. The brown makes a better base for the next stage. 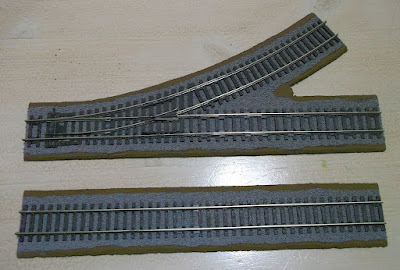 Apply flock or static grass to compliment your table and perhaps add the odd piece of foliage or flower tuft. 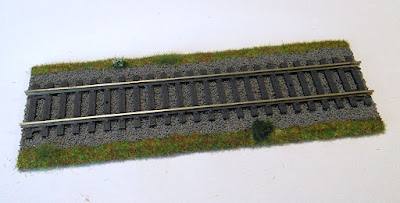 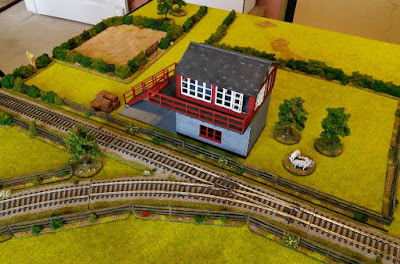 Or maybe somewhere in the Normandy countryside? 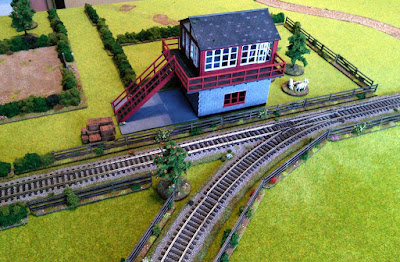 That's almost 9 feet of track including points for about £30. Now what I need to make is the signal itself. I also want to make a blown-up section of track. Then there are the sheds, a platform, a ticket office ... !?
Posted by Matt at 19:48 5 comments:

Well, "review" might be a bit of stretch as I’ve only played two games and ‘helped’ (in the loosest sense of the word) with a third game. Perhaps “first impressions” might be better? :o)

Kings of War (or KoW), from Mantic Games, is a fantasy themed massed battle rule set that seems to be pretty squarely aimed at those gamers who have boxes of GW figures stored in their lofts from those glory days of Warhammer yore. Mantic have their own range of figures but encourage players to dig out their old troops too. How refreshingly sensible.

I’ve been an historical gamer for quite a few years now but as someone who got in to wargaming back in the 80’s through Warhammer, I cannot help but get a little misty-eyed when I think of my old Orc & Goblin horde (mainly Kevin Adams figures ... lovely!). Sadly, and perhaps foolishly, I sold those figures long ago. Anyway, enough nostalgia for the moment, back to the game.

It’s an I-Go-You-Go style of game and the rules are fairly straightforward. Indeed I would say that they are actually quite elegant in their simplicity. Easy to pick up yet I think they will prove very tricky to master – lots of subtly in there.

Units are theoretically fixed in size; infantry are generally 10 for a troop, 20 for a regiment, 40 for a horde, etc. However, it is base size that is important rather than the number of figures. Also there’s no casualty removal. Those two points combined mean that keen modellers can go to town within the bounds of the base. Got a unit of crazy, axe wielding, barbarian nutters? No problem! You can scatter them across the area of the base, add some casualties, a bit of scenery, some squashed small furry animals, severed limbs, etc, whatever you fancy. It also means my unit of 16 Viking Ulfhednar (of dubious historical provenance I know!?) can happily occupy the base of a 20 figure ‘regiment’ with no need to buy any more figures.

Another neat feature of the army lists (11 of which are included in the mini-rulebook) is the way they help players choose reasonable forces. For each regiment you can have 2 troops plus one war engine OR one monster OR one hero. For each horde you can have 4 troops and one each of heroes, monsters and war engines. It will never stop full on power gamers from building 'cheesy' forces but at least it does help to avoid particularly 'orrible combinations.

Speaking of units sizes and bases, it may not surprise you to know that the base size for a troop of 10 regular infantry just so happens to fit in nicely with a unit of 10 figures on 20x20mm bases arranged 5 wide and 2 deep. Very handy! ;o)

Casualties are tracked by noting how much damage your unit has taken from shooting, fighting, etc. This wraps up fatigue, confusion, as well as the slain soldiers, into one simple score. When they accrue a certain amount of damage they are “wavering” (so cannot advance, fight/shoot less effectively, etc). Accruing more damage will eventually result in the unit routing – the unit is simply removed – it can be very brutal! Damage can be ‘rallied’ by Heroes or ‘healed’ by Wizards. Having to note such scores for each unit could be considered to have a whiff of accountancy about it, but not really ... I know a bloke who does some excellent double dial counters.

Characters: Wizards are basically Battle Mages who blast the enemy or perhaps do a bit of healing – any old D&D players will feel a pang of nostalgia for them. Heroes boost the leadership of nearby units but add little to the fighting – no hero hammer here!

The game play is pretty fast and furious, although that doesn’t mean you have to hurtle across the table to grapple with your enemy. Manoeuvre is all important in this game; get caught out of position and you’ll soon be removing that unit. Also, shooting is supplementary in some ways – on its own it will not win you the battle but it helps to soften up tough foes. Magic is similar to shooting, again it will not win you the game on its own. It’s a balance, but good manoeuvring and picking the right combats will give you the advantage ... that and rolling good dice! ;o)

All the major fantasy races, plus a selection of human ‘kingdoms’, are covered by either the rulebook or one of the expansion supplements, so whether you have a collection of Ogres, Elves, Dwarfs, Chaos, Empire, Bretonnians, Skeletons or Saxons, Romano-British, Vikings, Romans, etc you can still join in the fun. In fact, if you have an historical army then just by adding a unit or two of something monstrous you have an army for KoW. Strictly speaking just your regulars are all that’s needed for an army. The only limit is your imagination.

The full on, glossy hardback rulebook is available for around £25 and includes some background for Mantic’s own fantasy milieu. I’m quite happy to use my own ideas so the other option for the rules is the marvellous “Gamer’s Edition”, smaller format, full colour, soft-back rulebook which I’ve picked up (from Argos!?) for just £9. Bargain.
Posted by Matt at 18:43 1 comment: