The Battle of St Beocca’s Abbey

Later today we're off to take part in a big Dark Ages battle with chums Steve and Dave. To add some extra interest I've played with history a little (Sweyn II's invasion of northern England) to create this scenario. 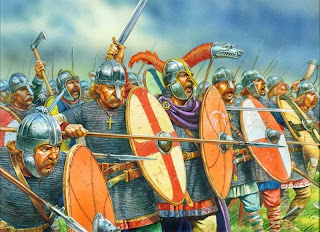 It is early October of the year 1069 and the weather is turning cold. The trees are clad in their red and gold Autumnal hues. King Sweyn II of Denmark has invaded Northumbria to claim the throne of England. William has assembled his army, along with those Saxons who have accepted the Conqueror’s rule, and marched North.

The Saxon Eorls in the North have carefully gathered their strength, raising the fyrd and safeguarding their winter stores. They knew that William was on his way to deal with the invader – but perhaps Sweyn would be victorious? Whichever side won would be weakened, so the Eorls bade their time. Sweyn had been quick to establish a firm grip on his new lands. His men roamed far and wide, raiding and looting, crushing any resistance. Every day more gold, silver and slaves were brought in to his camp near Eoforwic...

The rain continued to pour down from the leaden grey skies as Alfred guided the heavy cart along the road. Accompanied by his sons Oswine and Sigeberht, he was taking his annual farm tithe to the Abbey. There were bags of flour, barrels of apples, reeds for thatch and sacks of barley, all safely stored under thick, waxed canvas.

The muddy road was hard work for the pair of horses, especially as they climbed the last hill from where they would see the broad valley in which the abbey sat. Dotted with farms and covered in fertile fields, the area was good farmland. The Abbey had grown rich; very rich if the rumours were even half true.

Alfred was looking forward to a warm fire, good food and several pots of the very fine ale they brewed at the Abbey. It was late in the day so they would stay the night and head back to the farm in the morning. “Might as well enjoy their hospitality, eh lad?”, he said, nudging Oswine in the ribs.

“Yes, Father”, replied Oswine dully. He was cold, soaking wet and thoroughly bored. He’d been day-dreaming about being a bold warrior, recounting some of his uncle’s tales of fighting the Normans and before that the Vikings. Farming was not for him.

The cart shuddered, slid and then stopped. One of the wheels had become stuck in deep, muddy rut. Cracking the whip was no use – they’d have to lighten the load on the cart. The fire, food and ale would have to wait a little longer.

They were nearly at the crest of the hill. “Sigeberht, run ahead and see if anyone is on the road. Perhaps they’ll help”, Alfred said, and the boy walked along the road. “Though I doubt anyone will be out in this weather”, he added quietly and started to unload the cart.

Minutes later Oswine looked up to see his younger brother running back down the road, waving his arms wildly and shouting. “Father!”, called Oswine, and Alfred looked up too.

Sigeberht was frantic and began gabbling – “The Abbey!” ... “Fighting!” ... “Warriors. Slaughtered monks!”. Alfred shoved the boy in to the arms of his older brother and pounded up the road.

As he reached the ridge the sight chilled his blood. The Abbey was surrounded by hundreds of armed men – Danes by the look of the shields and banners. The fields were dotted with dead and dying monks, slaughtered as they fled. At the gates a small band of Thegns and Ceorls were making a doomed last stand. As he watched, a huge Viking hefted a war axe and cut in to the makeshift Shieldwall. It was over in a few blood-soaked moments. “Dear Lord, save us”, Alfred said, “Dear Lord”. He turned to run but not before a couple of raiders on horseback had seen him.

He raced back downhill to the cart. “Father!”, called Oswine, “what is it? What’s happening at the Abbey?”. Alfred didn’t answer. He drew his knife and cut the traces on the cart. Glancing back up the road for any sign of the Vikings, he brought the horses around and hoisted a still terrified looking Sigeberht on to the animal’s back. Turning to Oswine he said, “Take the other horse and your brother. Find our Lord Ceolnoth and warn him of the Vikings. Then go to the farm. Take only what you need and lead your Mother and Sisters south.”

“What about you Father?”, Oswine said, still stunned by the turn of events. Alfred shoved the bridle rope in to the older boy’s hand then reached under the covers on the cart. He pulled out an old sword. “There are Vikings coming lad,” his voice was level, “Vikings on horses. I’ll keep them busy. Now Go!", the last two words were shouted. “Go! And take your brother! God be with you!”.

Oswine kicked his horse and dragged his younger brother’s horse behind. He did not want to leave his father. He had been learning the sword-strokes from his uncle, he should help fight. But he also knew he had to save his brother and warn their lord.

Alfred clambered on to the cart as his sons rode off. “Now come on you pagan bastards!”, he shouted, swinging the sword in wide arcs to loosen his muscles. As if on command, the Vikings crested the hill and rode for the wagon...

The Abbey of Saint Beocca was exactly the sort of place Sweyn’s men looked for. Lots of treasure and defended only by a handful of old warriors, the prayers of a few monks and crumbling walls. They would spend a few days raiding the area and then return to Sweyn’s camp laden with slaves and treasure.

But they did not know just how close the nearest contingents of William’s army were. Barely a day’s march south the Normans and Saxons were busy making camp. It did not take long for word to reach them of the Viking army at the Abbey of St Beocca.

Battlefield and Deployment
As shown on the day. Hopefully at least an 8’ x 4’ table with a monastery and a small farm plus a few areas of light woodland.

Main Objectives
For both forces this battle is about capturing (or holding) the Abbey and thus the treasures within.
Secondary Objectives
These could easily be the main objectives for most raiding warriors!
Game Length
Play for as long as we can – or until the Vikings give in!? ;o)

Being a heroic leader in Dark Ages Britain wasn't just about having a good set of war gear. Leaders needed to be in the centre of the battle, slaughtering their foes, giving the bards and poets much to sing and write about. These simple rules aim to encourage players to get in to the spirit of such heroic behaviour by recording the deeds of each personality in their force. All heroes begin the battle with 0 Hero Points (HPs) and the bonuses are cumulative.

Getting Stuck In
These apply only once per combat. If a unit has two or more heroes then only one (the one in command!) gains the bonus.
Example, Saxons Ceorls (with Ealdorman Aelfric) are fighting Viking Hirdmen (with Hersir Ranulf). The Vikings charged so Ranulf gains +1 HP for charging.

Wounding the Foe
These apply to only one hero as we assume the heroic combat is one-on-one. We must assume that heroes seek each other out!
Example, Jarl Sven Svensson wounds Ealdorman Aethelfrith, so gains +1 HP. But Aethelfrith was already wounded and is therefore slain. Sven gains another +1 HP. Had Aethelfrith been the Saxon Warlord it would have been +1 HP (for the wound) and +2 HP (for slaying the enemy leader).

Routing the Enemy
These generally apply once per combat - but for multiple combats the victorious unit gains a bonus for each routed unit.
Example, continuing the earlier combat between the Ceorls and the Hirdmen. Unsurprisingly, the Vikings rout the Saxons. Ranulf immediately gains +1 HP. Aelfric loses D3 HPs. The flee/pursue dice are rolled and the Saxons are caught and slaughtered. Ranulf gains another +1 HP. Having dealt with a few barely trained farmers he’s feeling very ‘heroic’.

Rally!
An heroic leader can sometimes stem the tide of panicking warriors … sometimes! 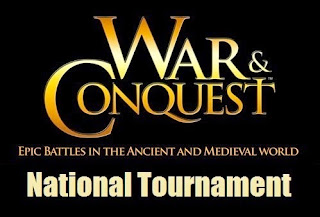 The themes of the weekend are the armies of the Dark Ages in the West and the World of the Greeks.

We look forward to seeing you and enjoying a few games of War & Conquest together.
Posted by Matt at 19:33 No comments:

Chum Colin of http://www.charliefoxtrotmodels.com/ has been hard at it creating yet more superb building kits.

His latest building is huge and superbly detailed! 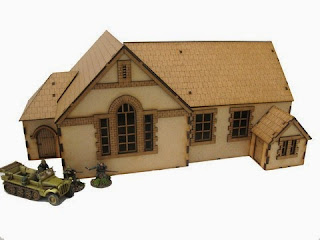 The British are coming!

As well as starting a new job at work (same company, but different development team) I've also started a new army! Here are the chaps of the first section for my Chain of Command British.

I'm collecting the force with the Normandy campaign in mind, although I've included a mix of equipment types. The later war British figures tend to have helmets with webbing and foliage, but I've mixed in plain helmets too. Looks fine to me. Here's the Bren Gun Team. 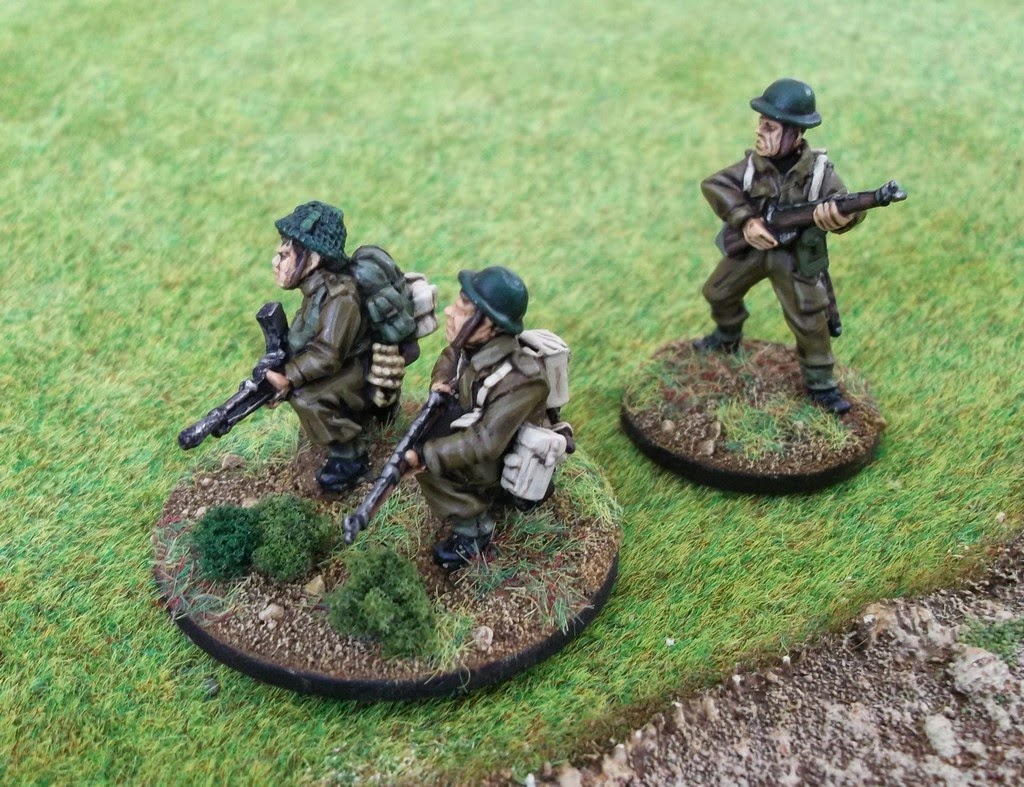 They're a mix of Artizan and Crusader figures. The Corporal with a Sten gun. 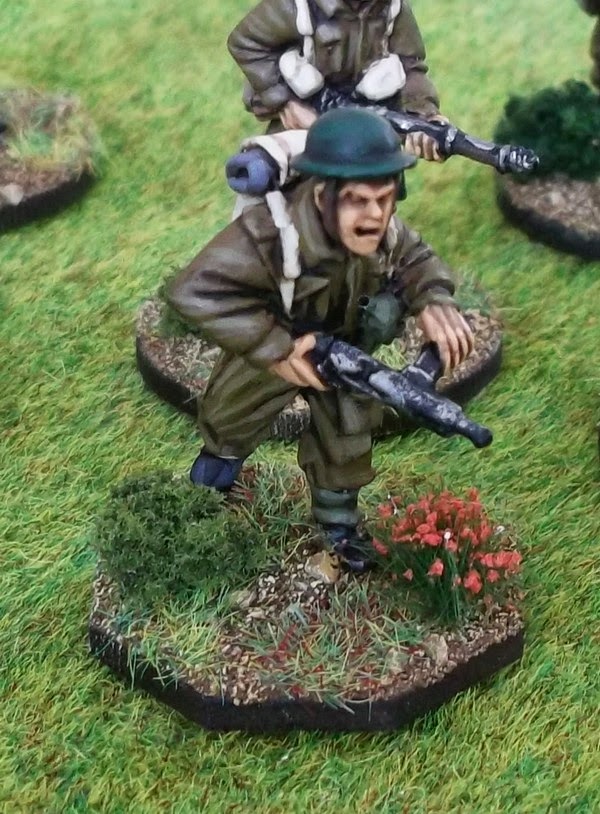 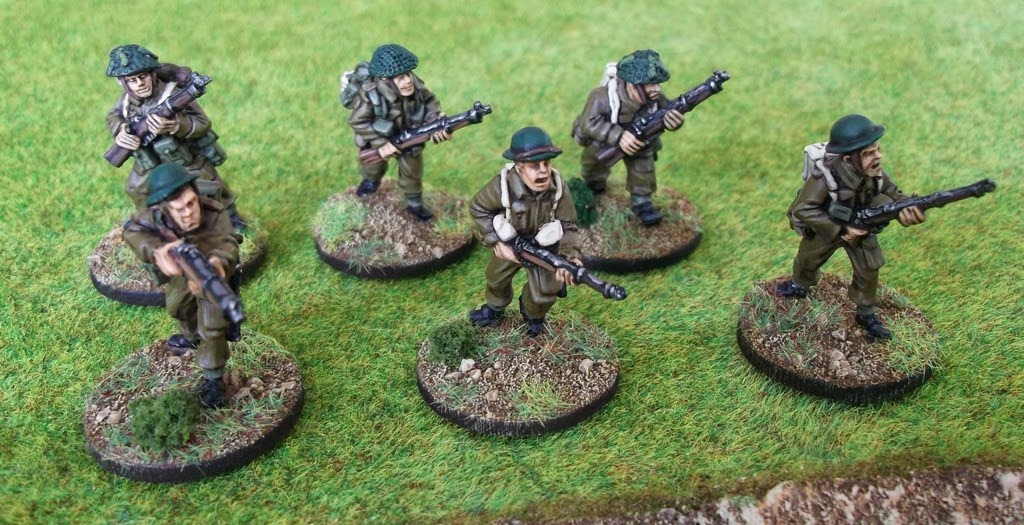 My painting "recipe" is as follows.

Undercoat
Start with a good, even coat of Warlord British Uniform spray. I did some figures with a lighter sand colour which was 'ok' but the darker uniform base seems to work better.

Highlights
This is the fun bit! Start by using the original base colours, then apply a quick highlight of either the next lighter Foundry colour in the triad, or just add a bit of Boneyard light to the Vallejo colour. It's worth doing the second highlight as it brings out the detail nicely. I finish off by highlighting the metal in a dull silver, e.g. GW Chainmail. It probably ought to be darker but I prefer a lighter result.