I'm delighted to announce that Wargames Table chum Colin Farrant has now launched his MDF scenery business on the web! You can find out more here http://www.charliefoxtrotmodels.com/. Colin is a very nice chap to do business with and the quality/price of the kits is superb! Plus they're very easy and enjoyable to build. After construction all the walls need is a little bit of texture, e.g. masonry paint, and they're ready to paint.

Here's the Norman Farmhouse as painted by Jenny. Good isn't it?! 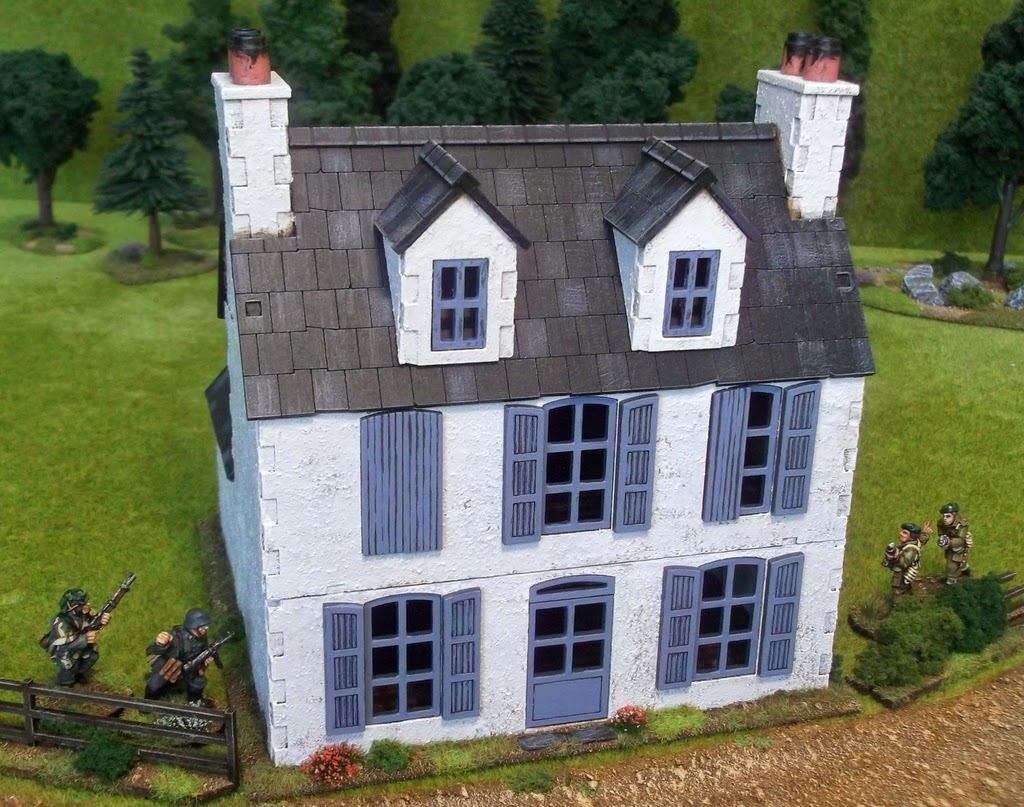 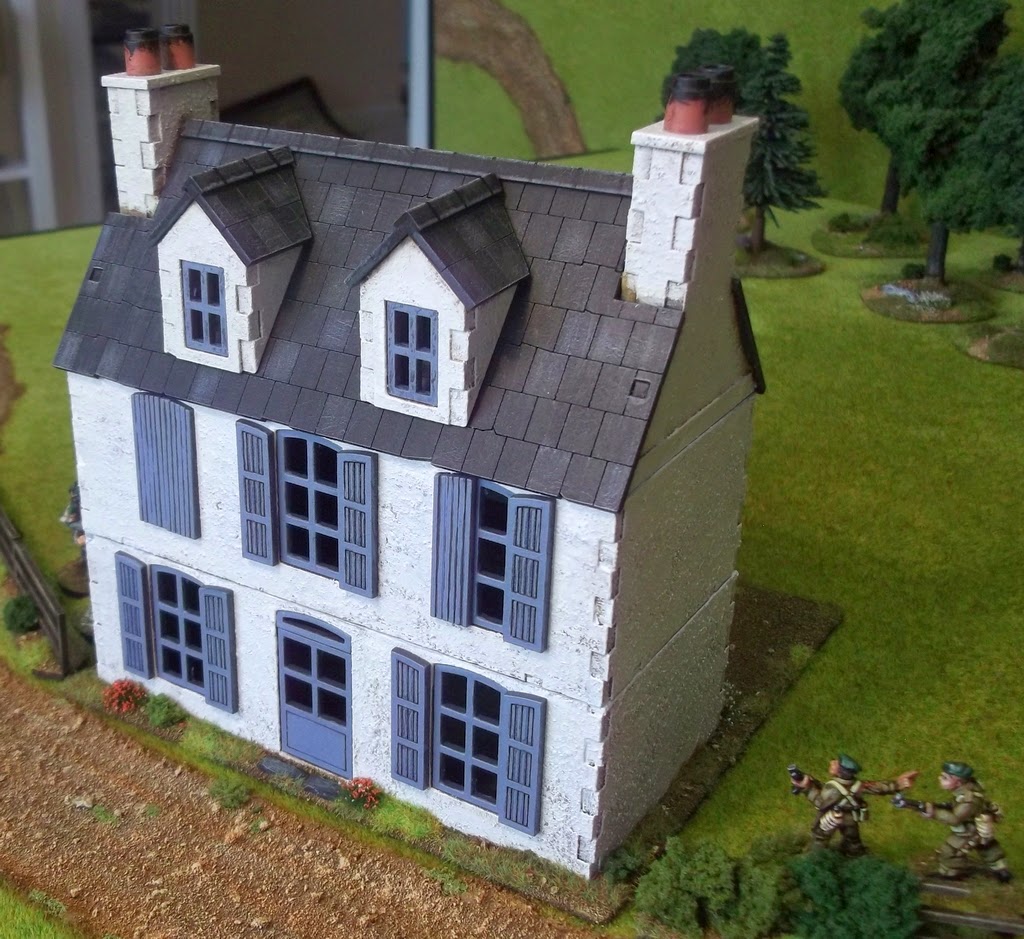 ... and decide to check out the back yard. 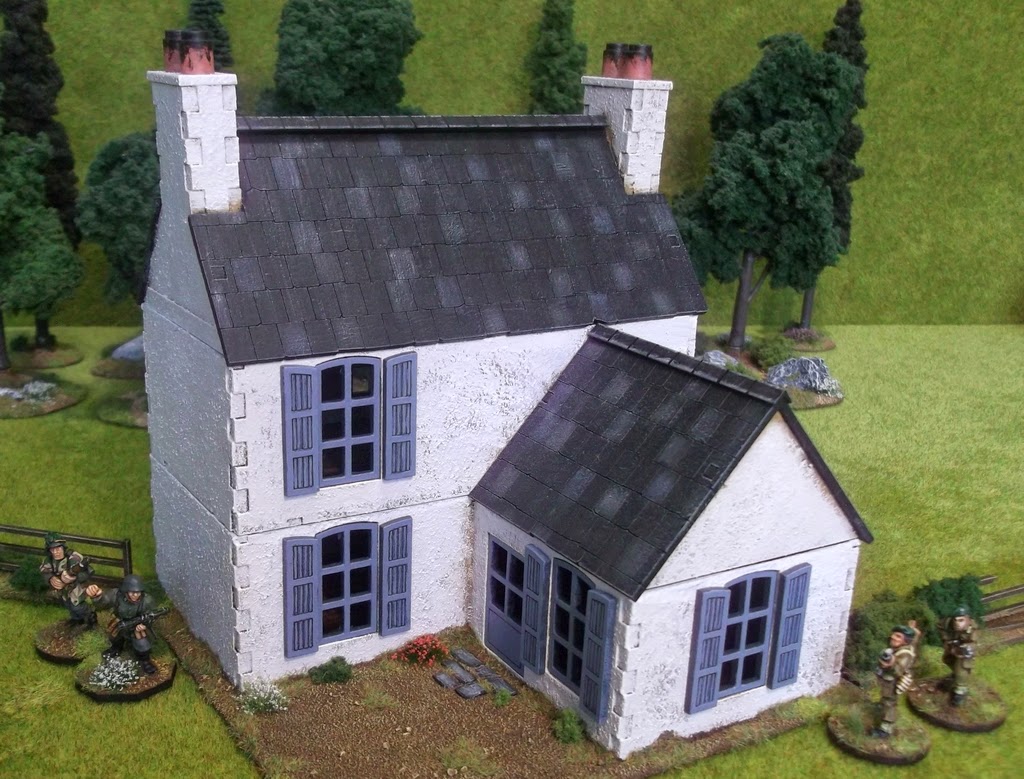 The doors, windows and shutters are separate items (included in the kit!) so they can be painted more easily, then added in to the building structure. The detail is ace. 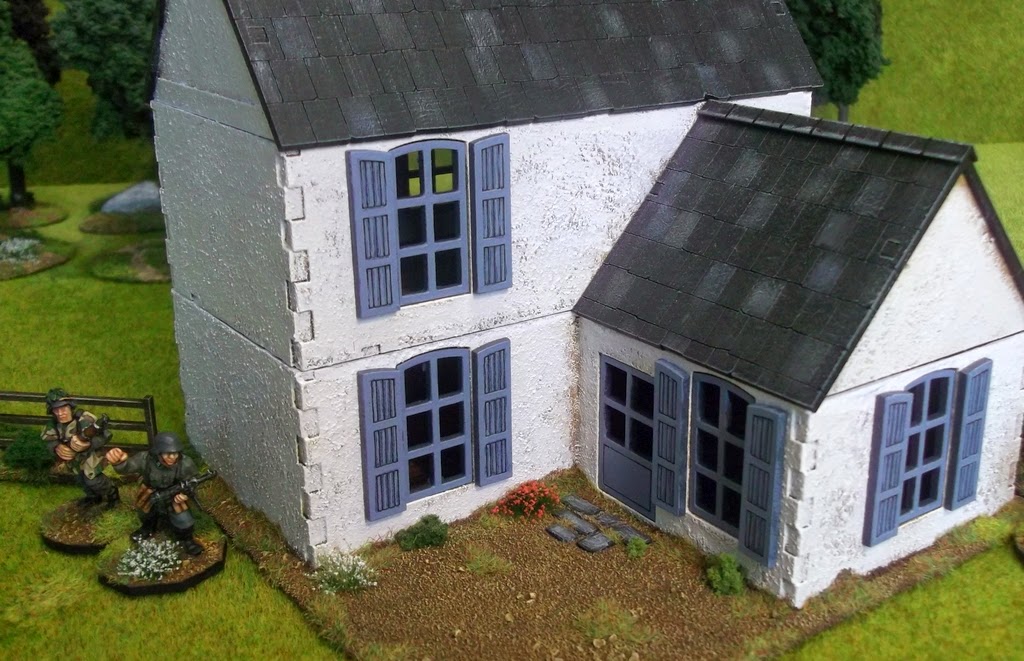 Jenny has painted the plain floors in an antiqued wood effect. 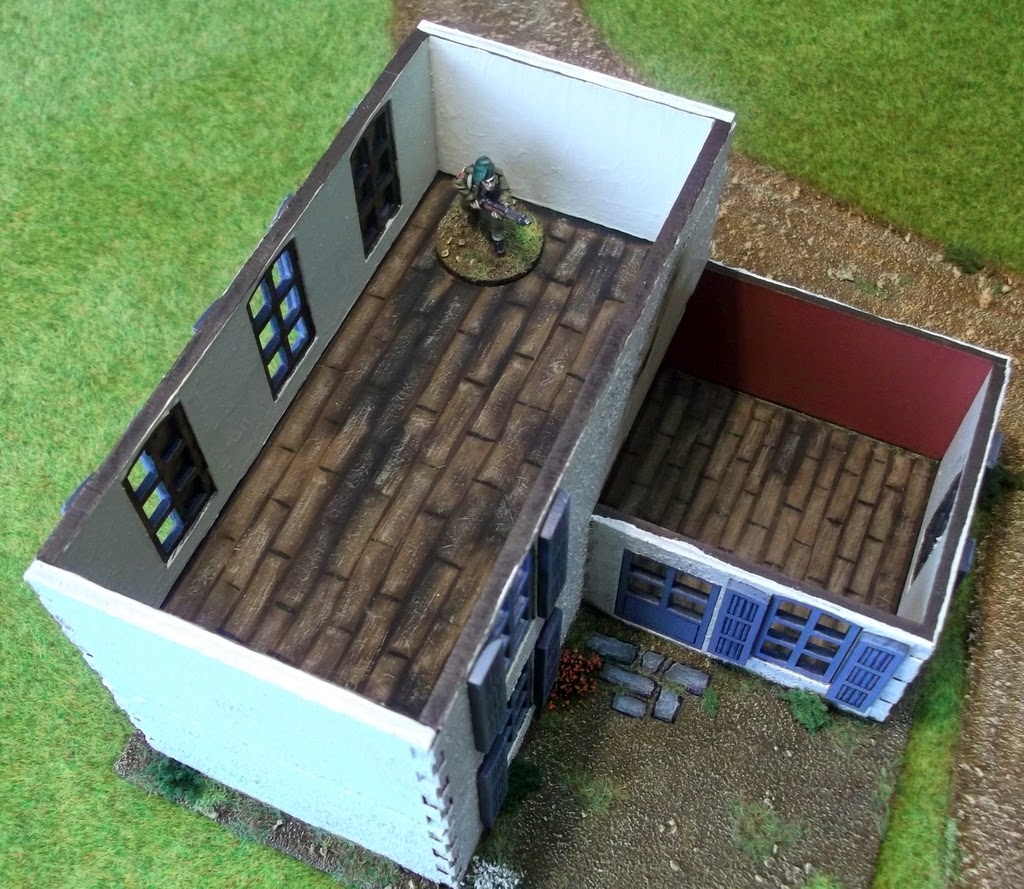 Plenty of room to add furniture if you like, or leave it empty to accommodate more figures. 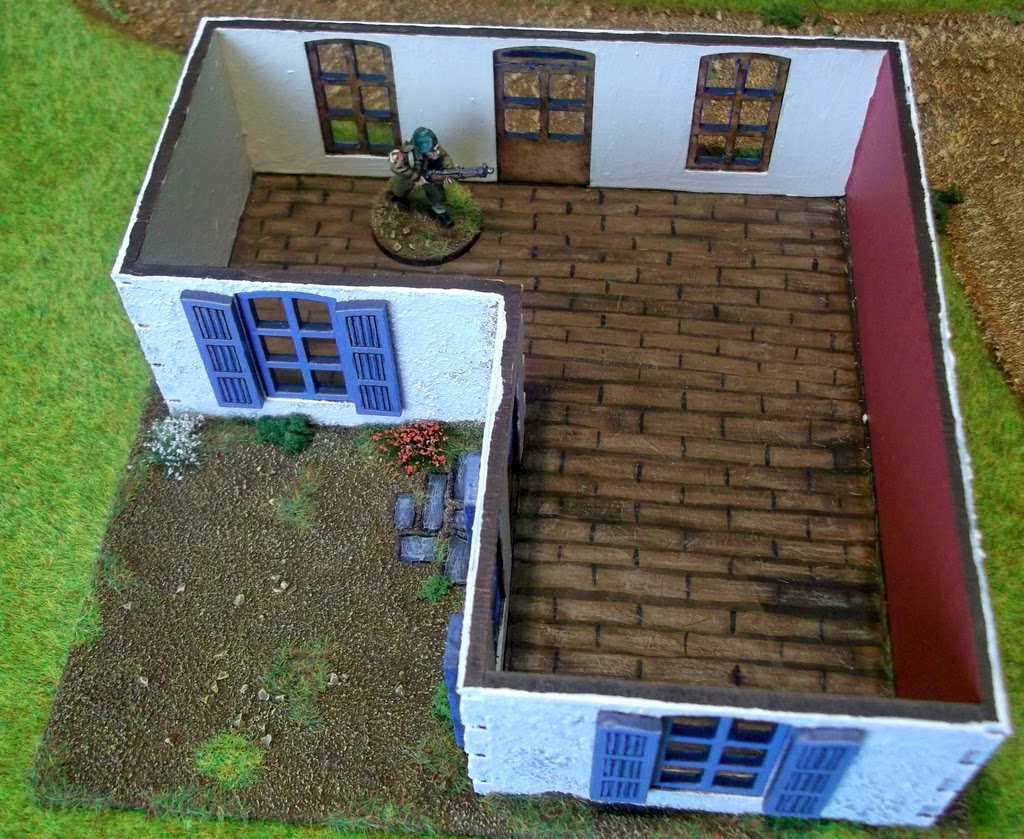 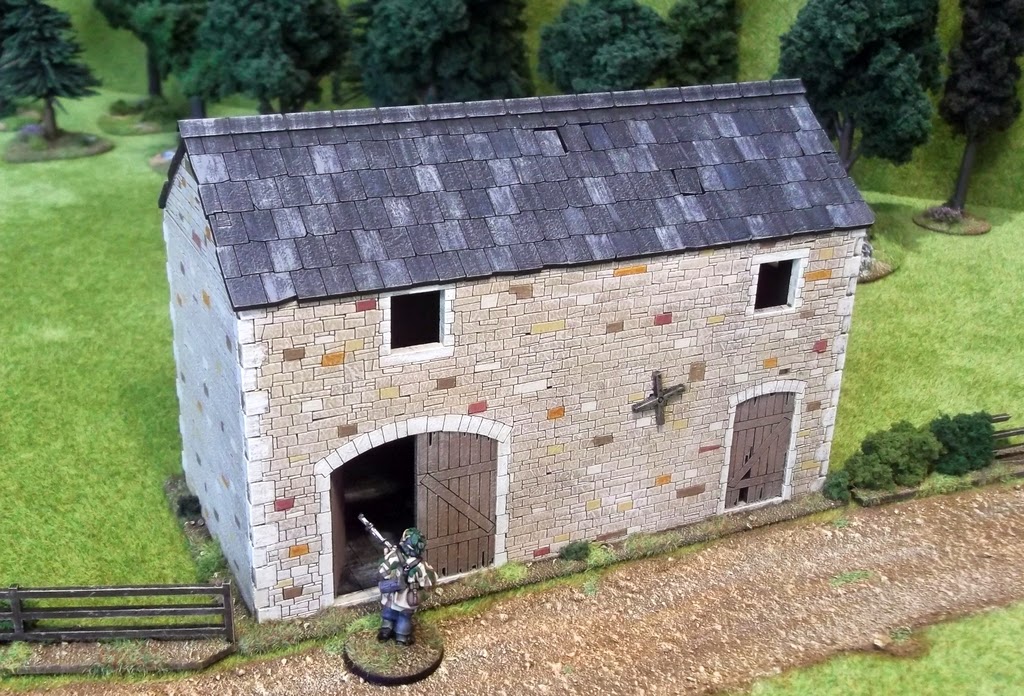 A German takes advantage of the views from the mezzanine floor. 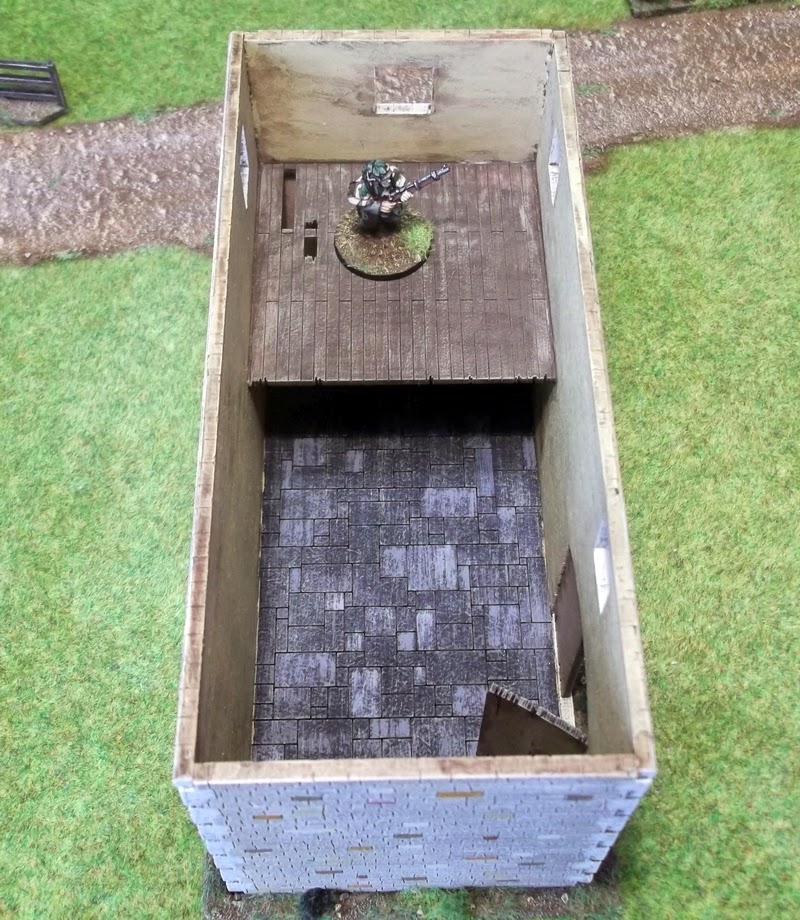 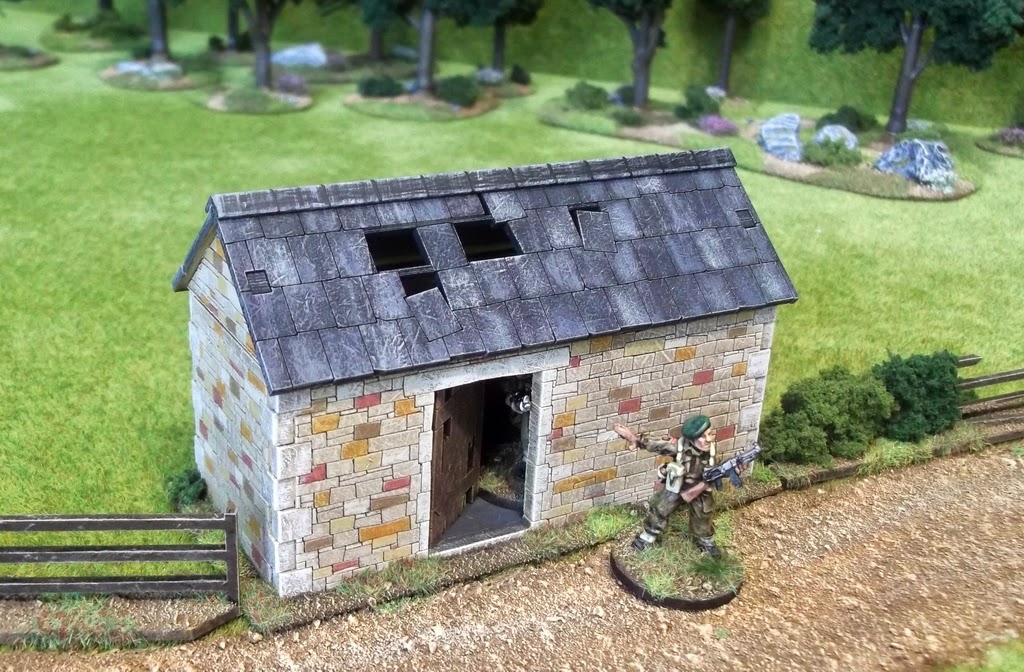 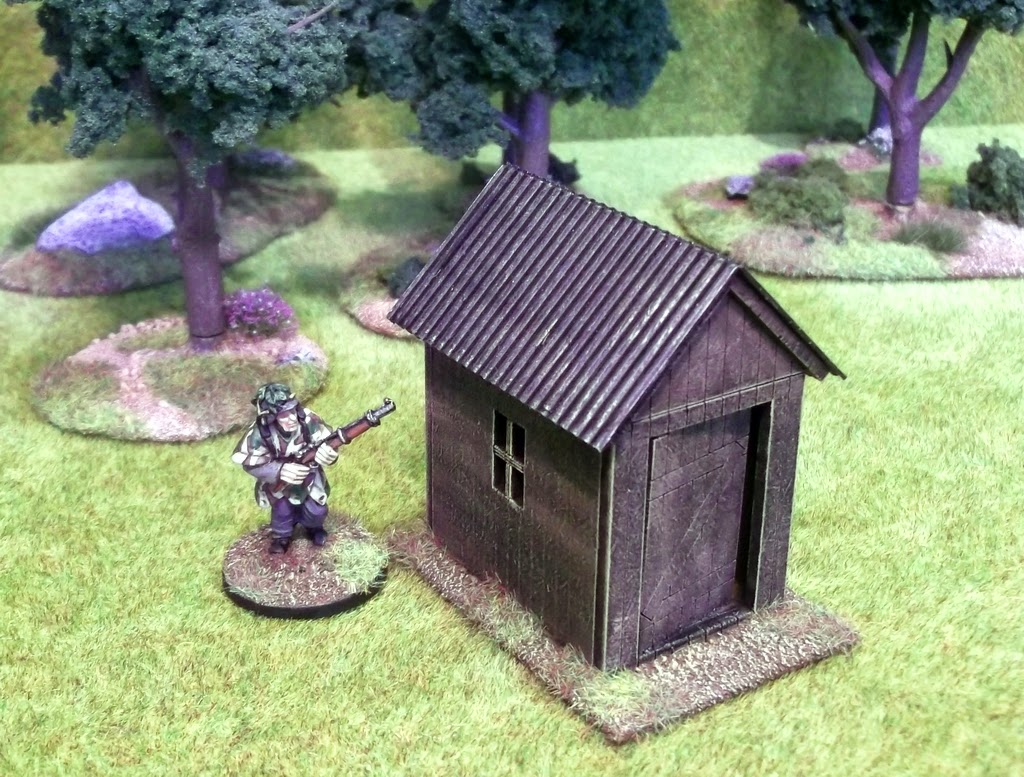 There are heaps more excellent kits available from Charlie Foxtrot Models, e.g. a boulangerie, a corner shop, another farmhouse, a variety of sheds and barns so give them a whirl! If you cannot see exactly what you want then perhaps drop Colin a line to see if he can customise an existing kit. Highly recommended.

Here's a quick 'how to' for making what I think are rather nice hedges for your wargames table... It starts with strip of plastic-card, about 6 inches long and an inch wide. You could use MDF or even ordinary card - although paper-based card is prone to warping. Cover them in PVA, then sand / grit, paint to match your terrain and apply a garnish of static grass. Voila!

Tip - To help prevent any warping or curling of the plastic-card when the glue/sand dries, I 'bent' them for a few days before applying the glue and sand, by putting a kebab stick under them and weighing the ends with piles of books. The end result was that they are flat.

This pic gives you a slightly better idea of scale.

I then glue (smelly 'all-purpose' glue!) on pieces of roughly torn Woodland Scenics clump foliage - using three colours, Light / Medium / Dark green. These are available from many model shops or on-line. Each bag is about £8 but will make a LOT of hedge. I estimate that each one of these hedge strips has cost me about 40p. Good value I reckon. Plus it only took two-to-three evenings to make 60 inches of hedge.

Here they are providing Phil's beleagured Paras with some much needed shelter during a game of Chain of Command. 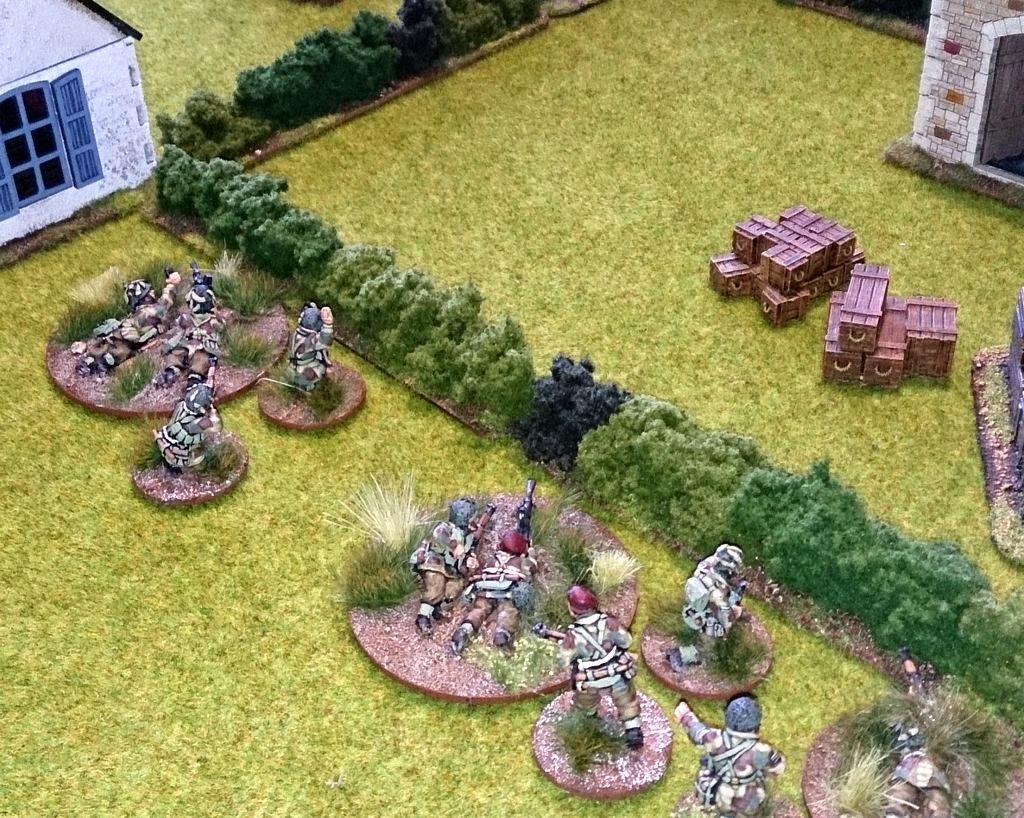 To take my mind off some of the heavier day-to-day stuff in life, I've been day-dreaming a bit about what armies I'd really like to build if I had (a) the money, and (b) the time...

Early Imperial Romans
First up it has to be completing my rather too modest EIR collection. I really like the Black Tree Auxilliary figures - they're top notch, but the Legion figures are definitely a bit "middling" in terms of figure quality. The newer range from Aventine are good but they are kitted out for a slightly later era than the conquest of Britannia. The Legion need to be at the larger end of the figure scale to fit in with the Auxilia, so I'll probably have to stick with the BTD Legion figures.

Caesarian Romans
A couple of years back I bought an army deal from Warlord when they released their plastic range of Caesar's Legions, along with some light troops such as Numidians. Typically for me they are still on the sprues. But I now I find myself looking at the Foundry range - superb figures that are full of character! 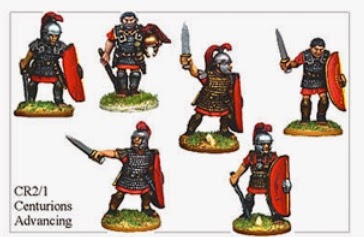 Chum Paul has some super painting from this range. Very inspirational. Maybe one day I'll flog the plastic and buy the lead. Maybe.

Ancient Germans
Ever since I first saw Phil's Germanic horde I thought that this army looked superb! I think his are mainly Foundry figures. 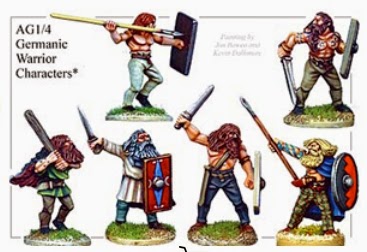 As with Caesar's Legions, they have bags of character and would make a nice change from the Gallic/British Celts I've used in the past. Perhaps I could begin by recruiting a few to help out as allies for Rome, then go on to build a 'proper' army? I'd really like to do some Rhine Frontier games either with Caesar, or his slightly later colleagues, trying to hold back the hairy hordes. I can just see a horde of Germans emerging from pine forests ... remind you of any films? ;o)

Normans
At the last Foundry W&C event I bought 10 packs of Normans. Again, they're still in the blisters. I have a reasonable sized Saxon army but the painting is a bit "hit and miss" (dipped). The Normans have always fascinated me. This was probably why, back in my younger WHFB days, I collected a Bretonnian army - don't laugh! This army would make a wonderful change from the less-than-dynamic shieldwalls of the Saxons.

It's not all Ancients & Early Medieval you know...

WW2 British
I have a number of blisters of Artizan British.

These are lovely figures too - which is probably why I indulged a whim a few months back and bought them! One day they may get painted - probably as Chain of Command force.

There's plenty more I could ramble on about... my own Viking army, WW2 US Airborne, Arthurian Romano-British, etc. But I think that's enough for now.

Whatever you day-dream about, enjoy your toys with your friends! :o)
Posted by Matt at 08:39 8 comments:

“The armies of Rome and their many enemies”

The theme of the weekend is the armies of Rome, from Republican to Early Imperial and their many enemies.

2500 point armies from any of the Republican, Caesarian or Early Imperial Roman armies or any of their enemies.

More details of the games, etc can be found on Dave's blog, here.

We look forward to seeing you and enjoying a few games of War & Conquest together.

Last Sunday I visited the club (Bristol Big'Uns, Iron Acton) to play another game of Dave Stone's exciting new WW1 rules "Zero Hour". Since our first play test back in January, Dave has made a number of minor modifications to the mechanics based on a series of games with other players in our group. However, it's good to know that the basic structure of the game remains intact - an indication that they're about right!

Our forces for this game represented two slightly depleted late war battalions on the western front - perhaps at the tail end of the German Spring Offensives in 1918. Dave led the Stormtroopers whilst I led the British reinforced with some Kiwis.

Deployment is done by Company, here they are at the start. (The table isn't quite as visually appealing as before, mainly because we both forgot to bring much in the way of terrain!?!)

In order to get things going we opted for a relatively open battlefield (even in the 'open' troops are permitted a basic cover save as it's assumed that they trying not to get shot!)

The battlefield included five key objectives - the side with the most at the end of the game would be the winner. Please note - the poker chips are (for now) used as command tokens, as officers use their 'bonus' the token is removed until the end of your next round of play.

As I had three objectives in front of my right flank I concentrated my forces on this side with a view to using my HMGs to slow any attack on my left. This proved handy as Dave opted to attack through the woods on my left but his attack became somewhat fragmented which meant I was able to deal with his Stormtroopers in manageable chunks. Had he been able to launch a massed attack with these fearsome chaps then I think the British would have been overwhelmed!

An early success for the British was neutralizing the German HMG battery. In one turn I threw everything I could muster at them - and it worked! Otherwise they would have dominated the centre of the field and provided much need support for the Stormtroopers.

The Kiwis race to the craters and the objective beyond. 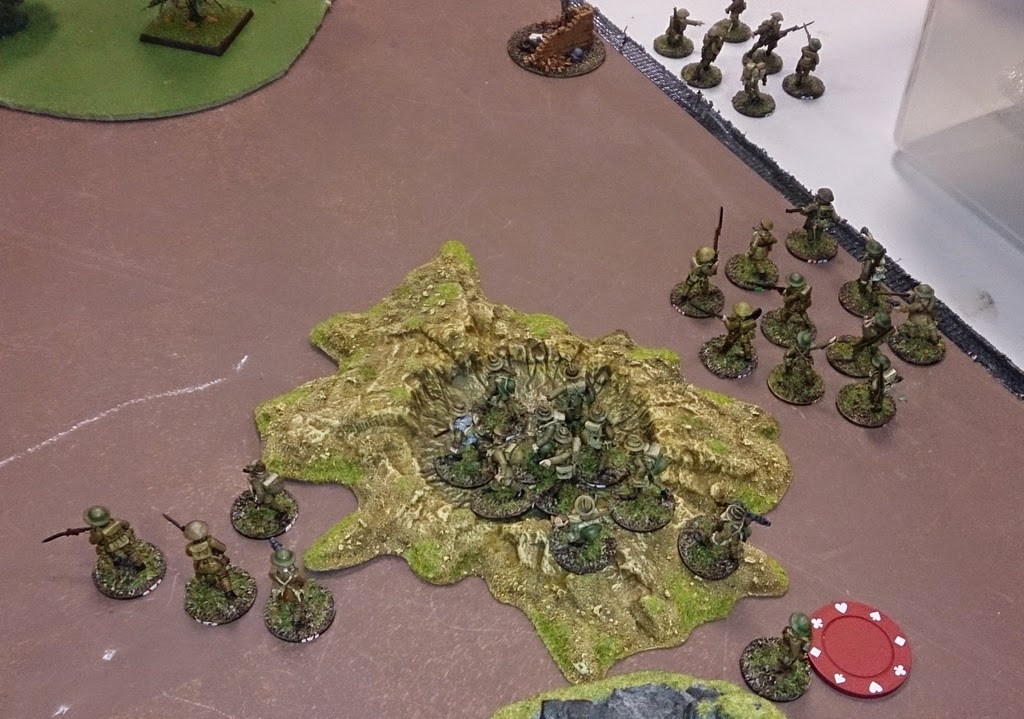 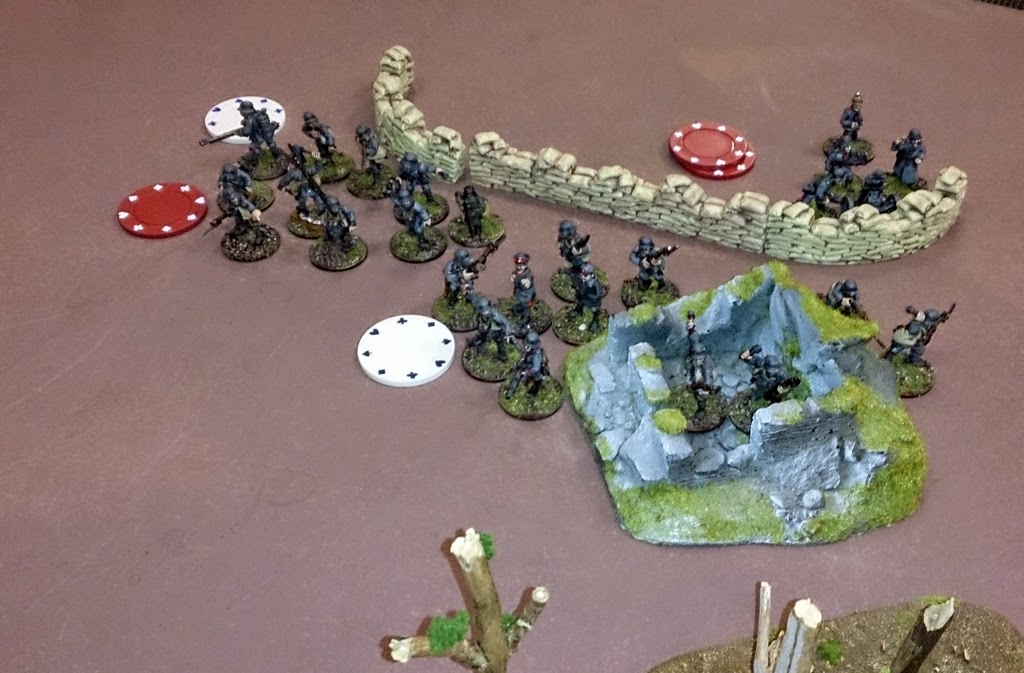 After turn two or three.

The Germans lay down some much needed smoke to cover the Stormtroopers attack. 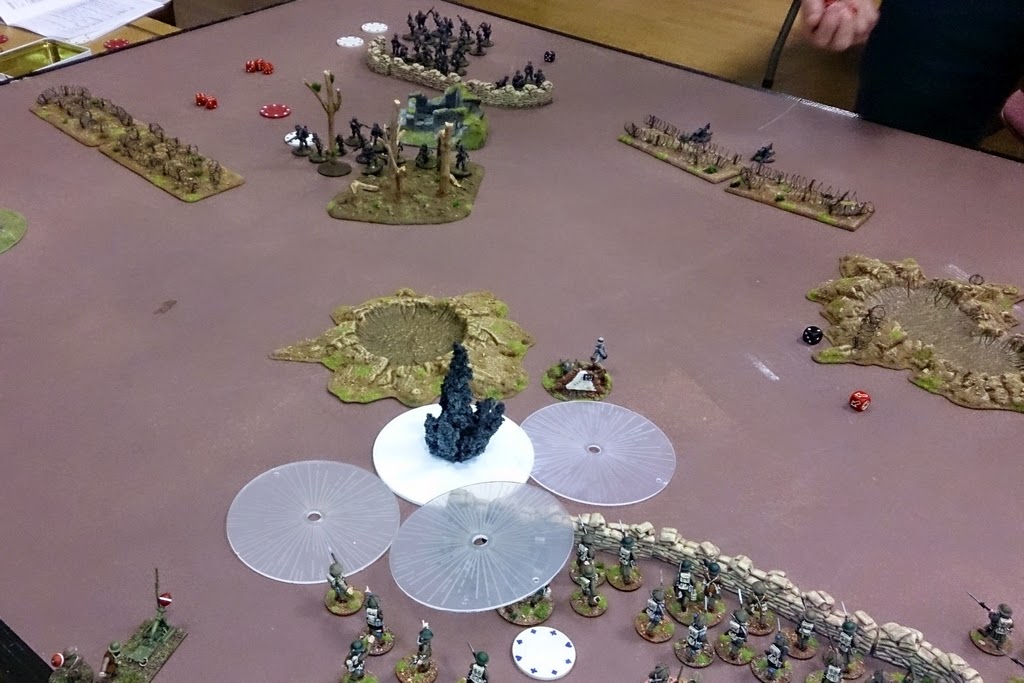 The game flowed really well. Dave's rules for the use of the command tokens (which can also be used in your opponent's turn, e.g. to interrupt enemy movement) really force you to think carefully about how to organise and mobilise your forces.

Some of the Stormtroopers make it to the British lines. Even outnumbered they proved to be very tough! 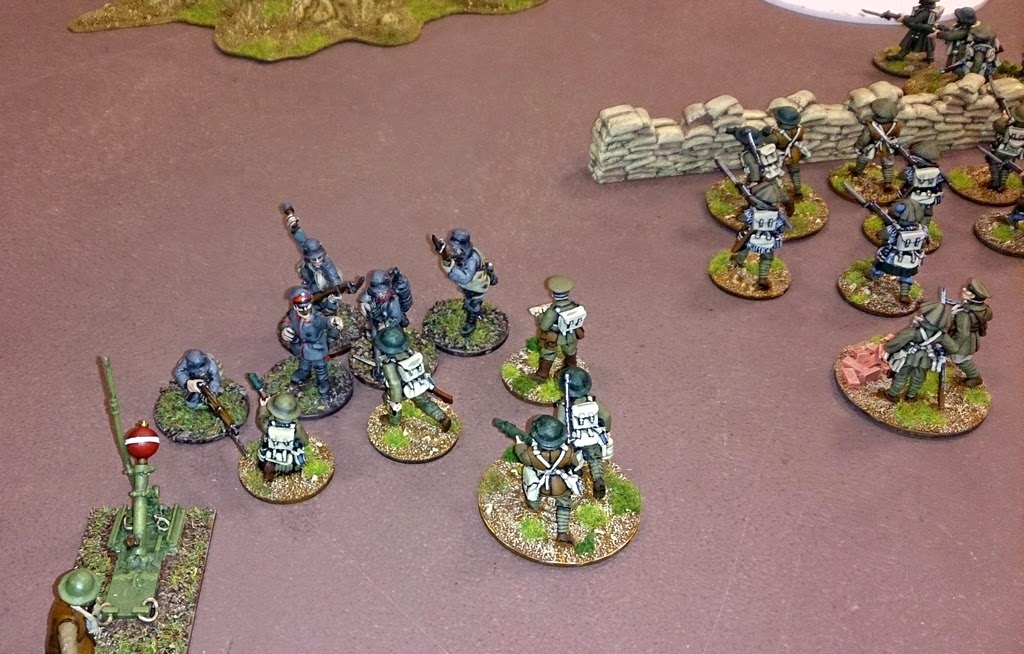 In the end the fragmented nature of the German attack afforded the British the time to deal with
the Germans and capture three of the objectives before we stopped for the evening.

A superb game :-D ... and the win was a nice bonus too ;o)
Many thanks and a big "Well Done" to Dave for organising things. I look forward to more games!
Posted by Matt at 08:30 No comments: