Having seen Jenny and I play some Chain of Command recently, my youngest - Katie - asked if we could play some Lord of the Rings games. A superb idea indeed! As we hadn't played for ages I decided to keep it to a simple scrap between Thorin's Company (with some Elves helping out) and a variety of Goblins.

The Company, pursued by angry Goblins, have taken shelter in an abandoned farmstead in the wilderness. Here they are. 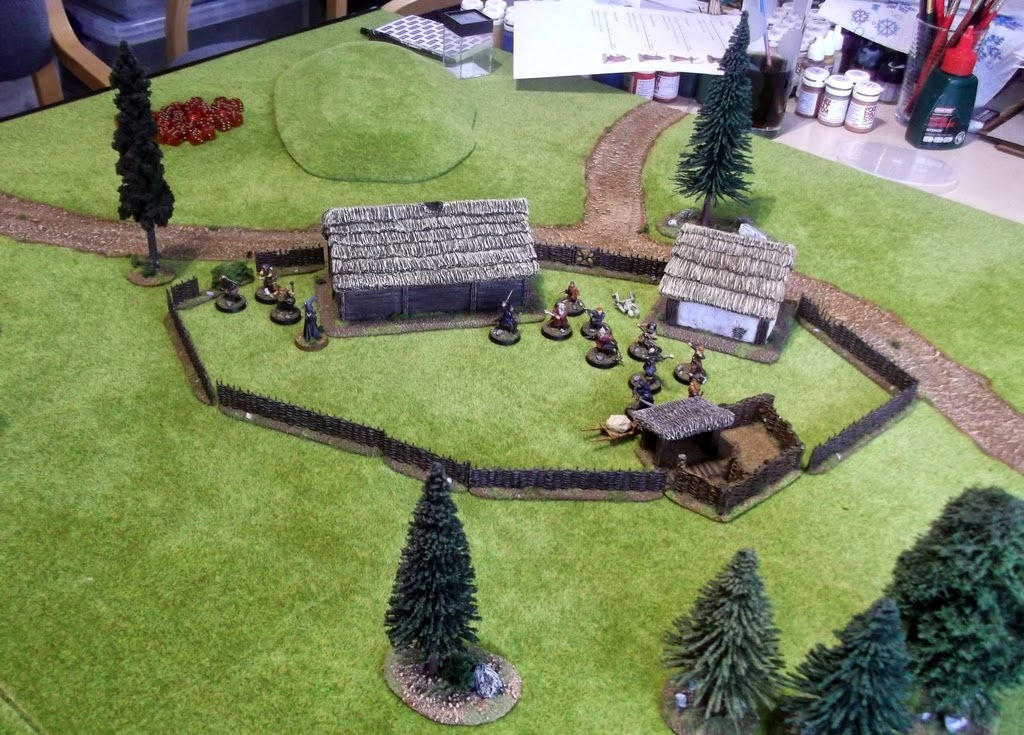 Here come the Goblins! Thorin had directed Fili and Kili to set some traps, so Katie was able to set up three hidden traps that would be activated at the end of any Goblin movement phase if they were close enough. She really enjoyed using these! 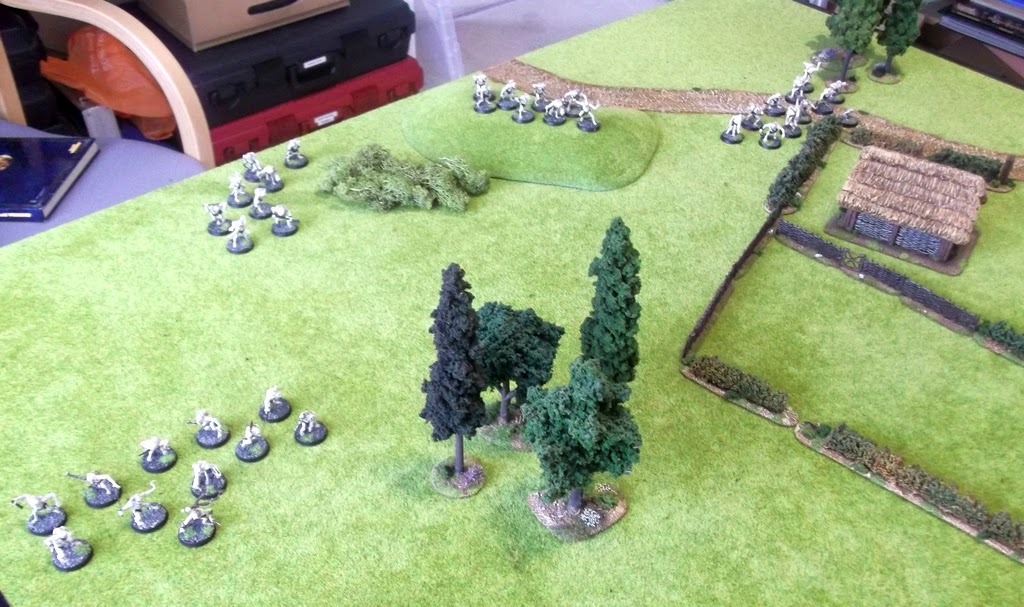 Having made their way across the table - being shot at by Dwarf bows, a few spells and the traps - the Goblins close in on Thorin and Company. This was also the point at which both sides reinforcements were activated. 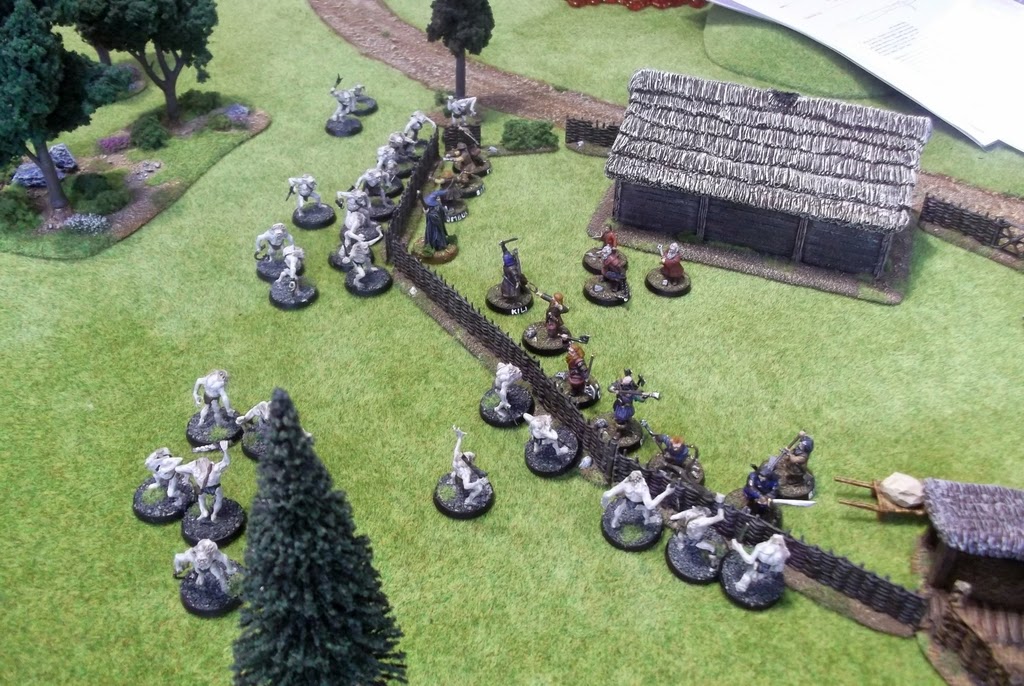 Here come the first wave of extra Goblins ... "They have a Cave Troll!" 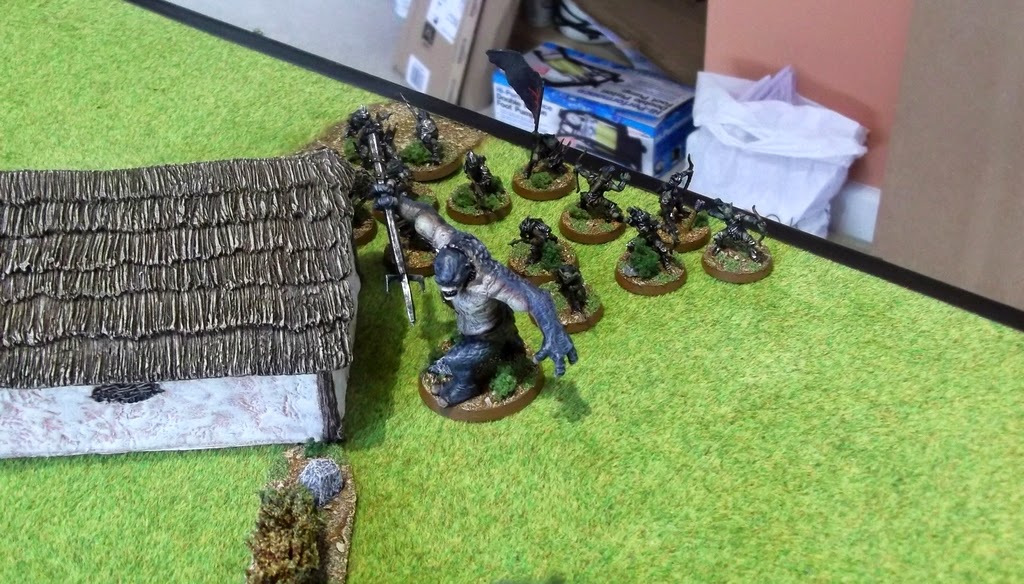 At this point a certain amount of "Adapative Army List Composition" came in to play. When Katie learned that the second wave would also include a Cave Troll she pointed out (in no uncertain terms) that this was unfair, especially if she then started rolling rubbish dice - so I duly checked my roster and declared "Oh, that's right ... I added up the points incorrectly ... silly me ... just the one Troll it is then" ;-) ;-)

The next two pics show a rather good turn for the Goblins. Both Gandalf and Thorin have been beaten and wounded, Gandalf twice in fact, thus allowing the Goblins in to the farm. 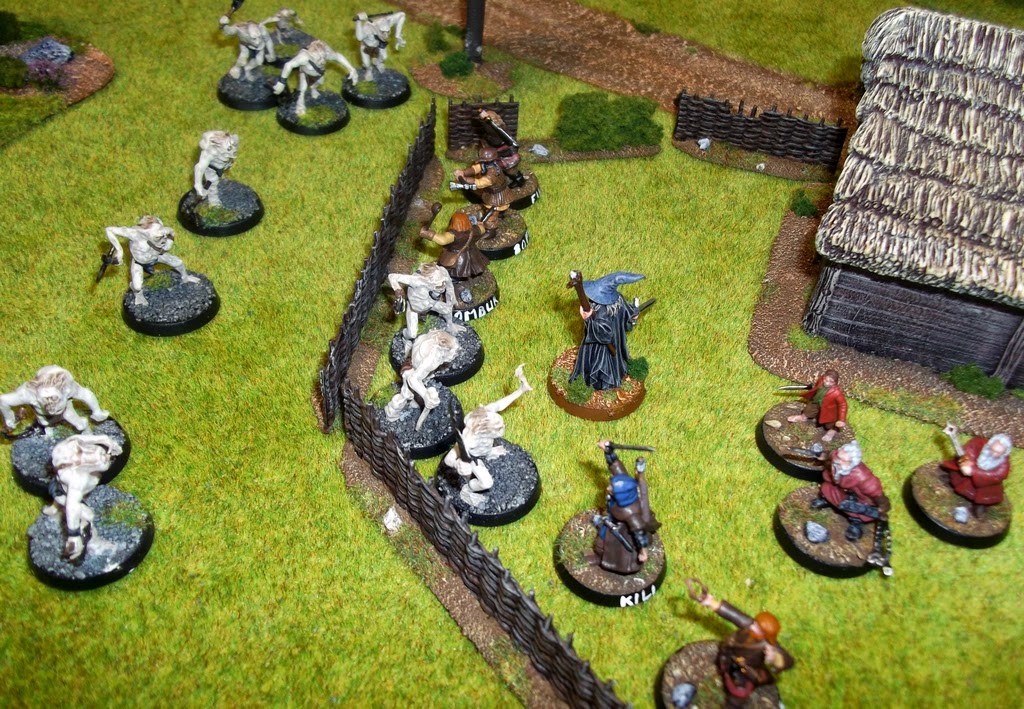 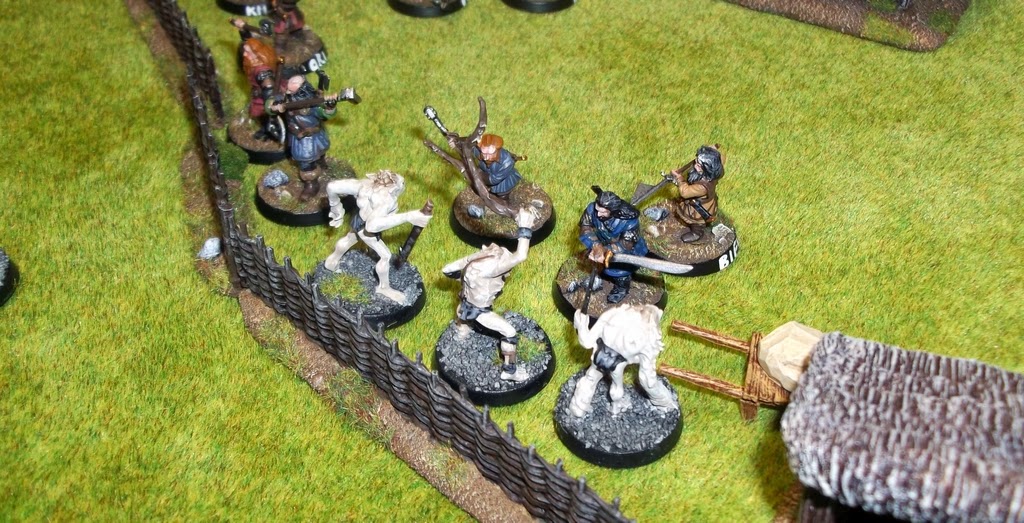 A few turns later and the reinforcements are getting stuck in. In the background is a rather one-sided archery duel, whilst in the middle the Cave Troll (not at all puzzled by the lack of his twin bro) gives Balin a headache. Most of the Misty Mountain Goblins have been slaughtered by Thorin and Dwalin so they advance to meet the Moria Goblins. Although it's worth noting that the Dwarfs were sustaining a number of wounds. 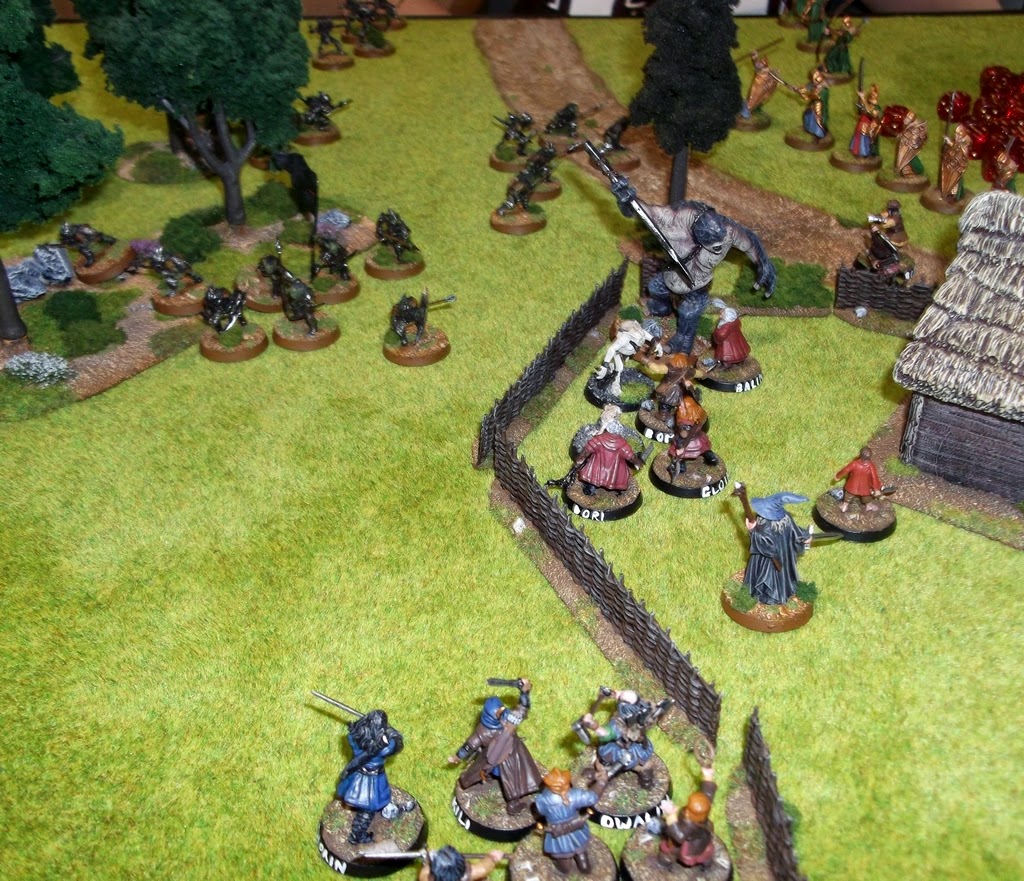 Have mashed Balin to a pulp - I felt slightly bad about this as he's one my favourite Dwarfs in the Company - it's Fili and Bofur's turn next! 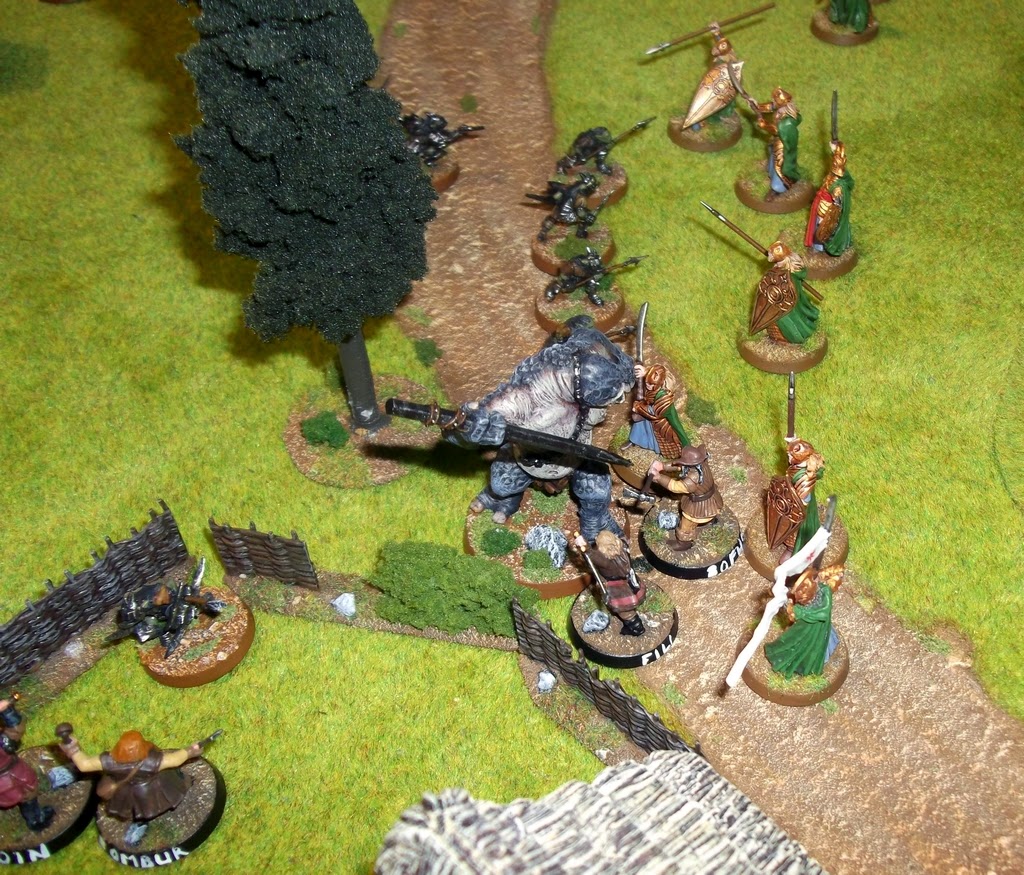 The Goblins did a good job of holding off the Elves, killing quite a few in the process. Fili, Bofur and the Elves kept the Troll busy long enough for Thorin and Dwalin to join the fray and decide the issue.

So with the dust settling, it was a hard fought victory to Katie and the Forces of Good!!!! A really good game with plenty of funny and exciting moments. LotR is not a complex game - but that's one of it's great appeals - it's easy to pick up and play.
Posted by Matt at 07:02 4 comments: