Very recently we were lucky enough to be allowed a preview of a new set of Great War wargaming rules penned by Wargames Table chum "Orange Dave". They're entitled "Zero Hour" ... and sub-titled "Instructions for the gaming of offensive actions in the Great War".

They're aimed at battalion (or larger) sized actions for two or more players and should be playable within an evening, i.e. 2-3 hours. The rules are still at an early-ish stage but all the basic mechanisms for moving, shooting, supporting fire, checking morale, managing the 'command integrity' of the companies and battalion, etc, are in place and work smoothly, resulting in a well paced, fun game of toy soldiers.

Here my BEF advance towards a newly constructed German (ably command by Jenny) trench line, with a Mk IV leading the way! The smallest infantry unit is the platoon, represented by 10-12 figures including an LMG team. Support teams such as HMGs and Mortars either operate independently or under battalion/company orders - the latter is slightly more effective. 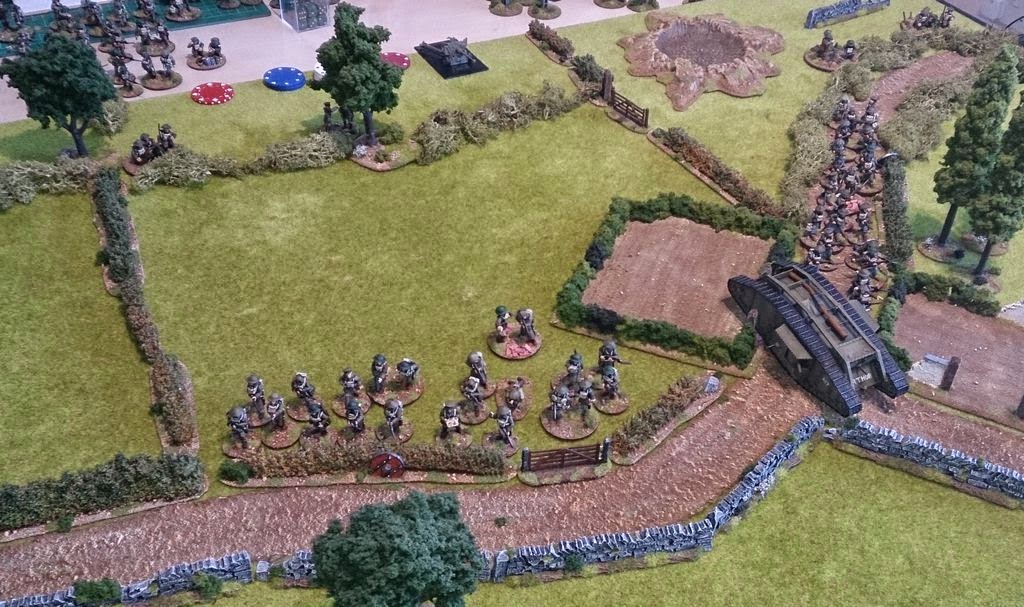 The German's hastily dug trenches are still a formidable objective. The bunker contains an HMG. 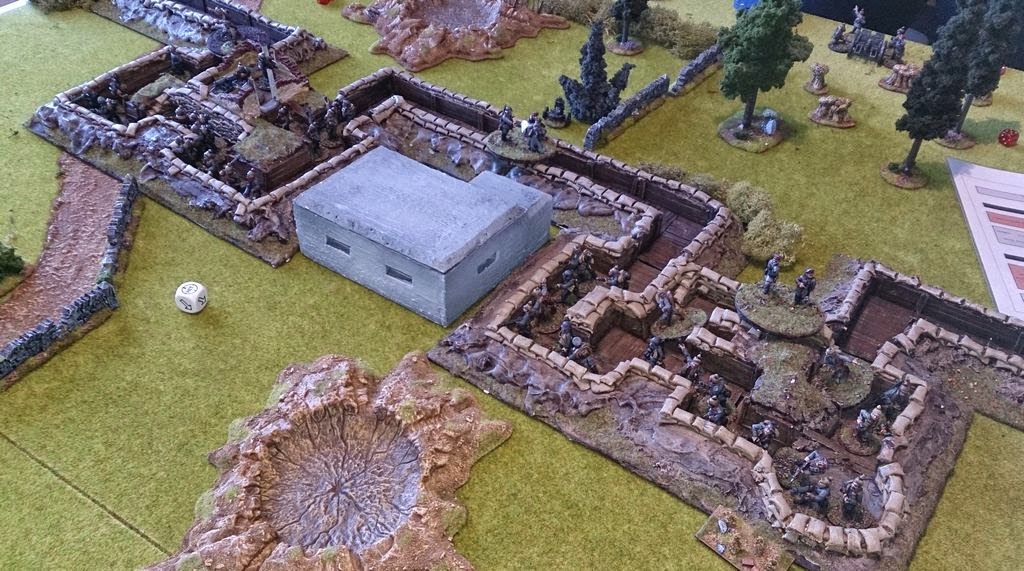 The 'company' beyond the tank took very significant casualties when their movement across walls/hedges left them bunched and rather exposed to both artillery and HMG fire. Oh dear! The result is that the remains of each platoon amalgamated (a neat rule IMHO) to form an under-strength platoon - having both passed the necessary morale tests. Clearly they're made of stern stuff! However, the marker placed in the field adjacent acts as a reminder that they are disordered. 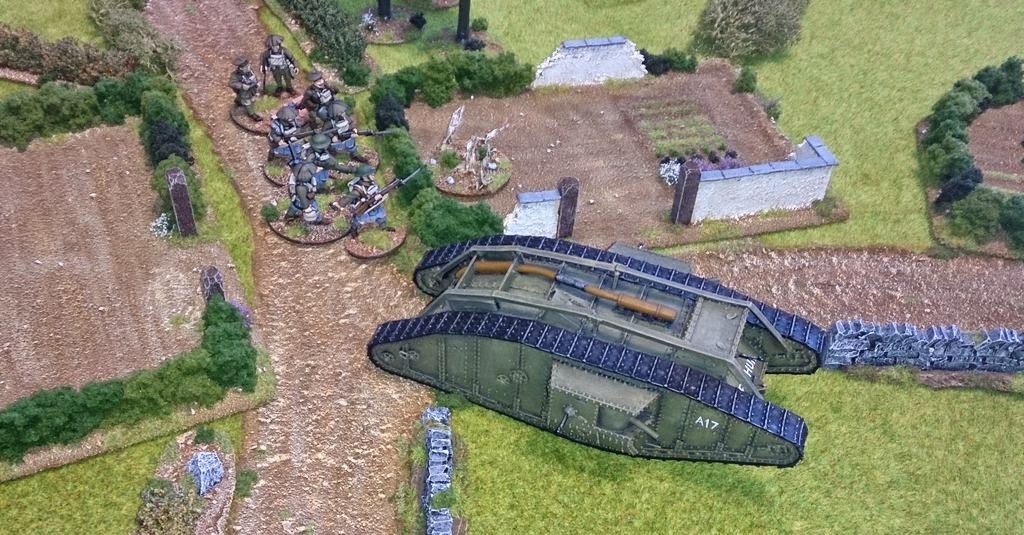 Being disordered makes a unit far less effective in terms of shooting/fighting and much more likely to either withdraw or even rout. However, company and platoon commanders may take time to rally their men and restore a degree of good order.

Another company hop over hedges and walls to reach the German lines. 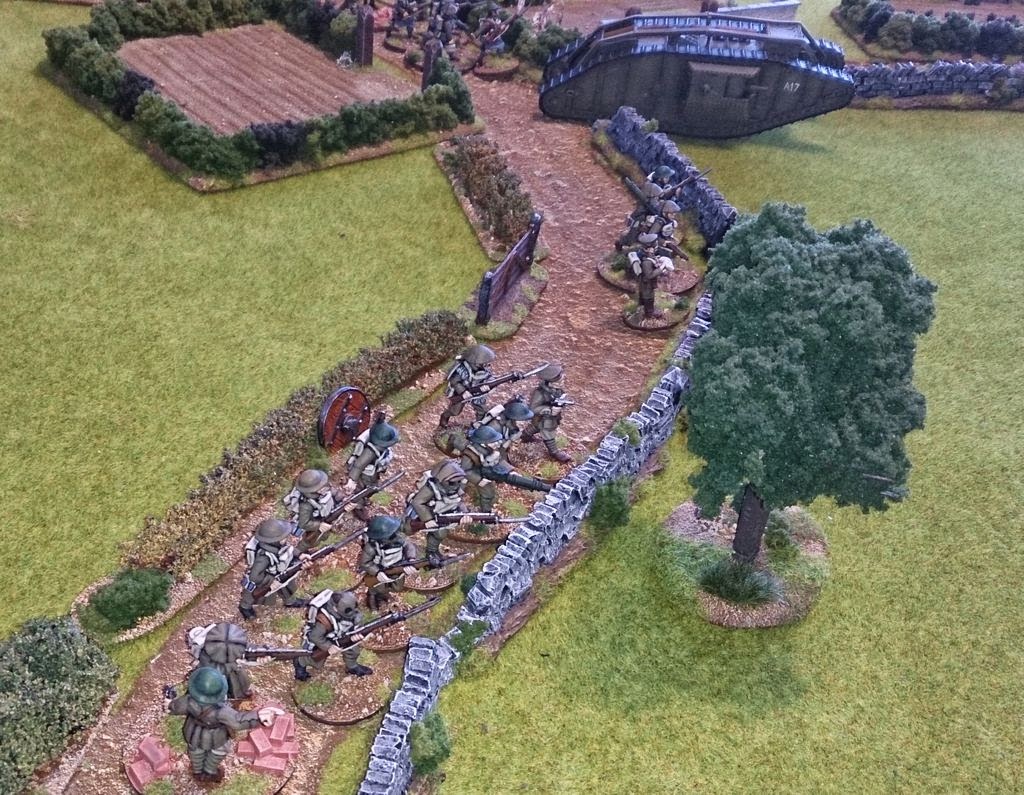 High command have sent in the second wave. Bravo chaps! 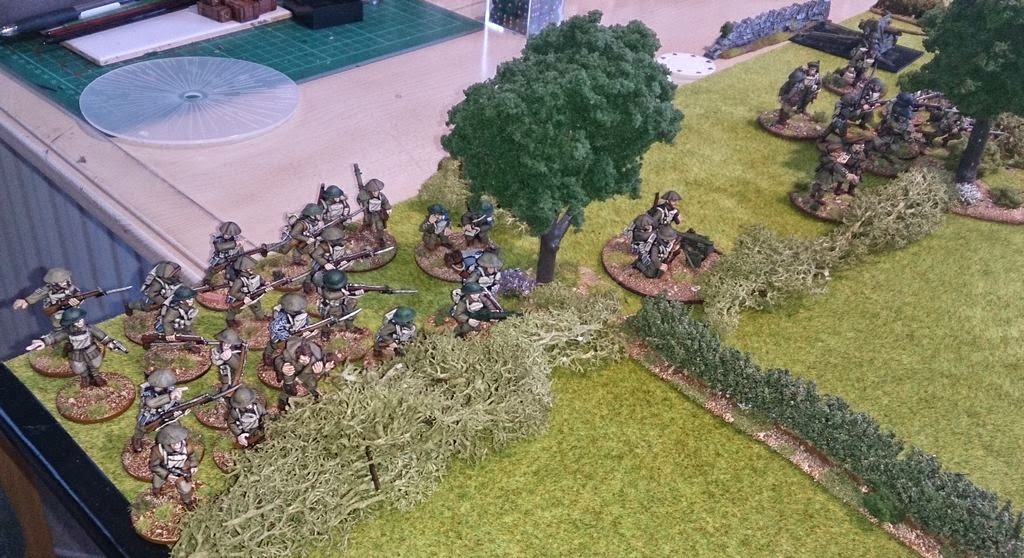 But what's this?! Those nasty Hun have rather unsportingly ranged in on the tank with their off-table artillery. With a spectacular round of dice from Jenny, the tank goes up in a ball of flame and smoke.

Now it's Fritz's turn for some re-inforcements ... Is that a certain Herr Rommel hiding behind the hedge - clearly a quick detour from the mountains to the western front! 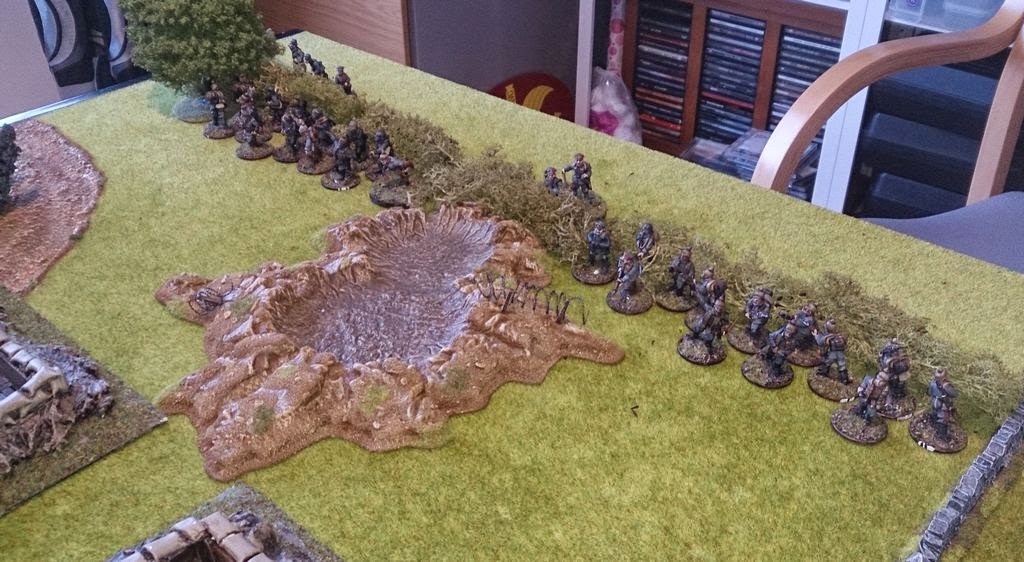 But the chaps in Pickelhaubs aren't having it all their own way! Oh no - the brave men of the BEF have their own supports. This time some off table artillery finally manage to bring shells raining down upon the bunker.

With the Germans reeling, some of the boldest of my chaps make it in to the trench and attempt to carry the day at the point of the bayonet. But with over-stretched lines of communication, the plucky British were rather exposed, whereas the Germans (with suitably energetic company commanders nearby) were able to recapture their trench in very bloody hand-to-hand combat. 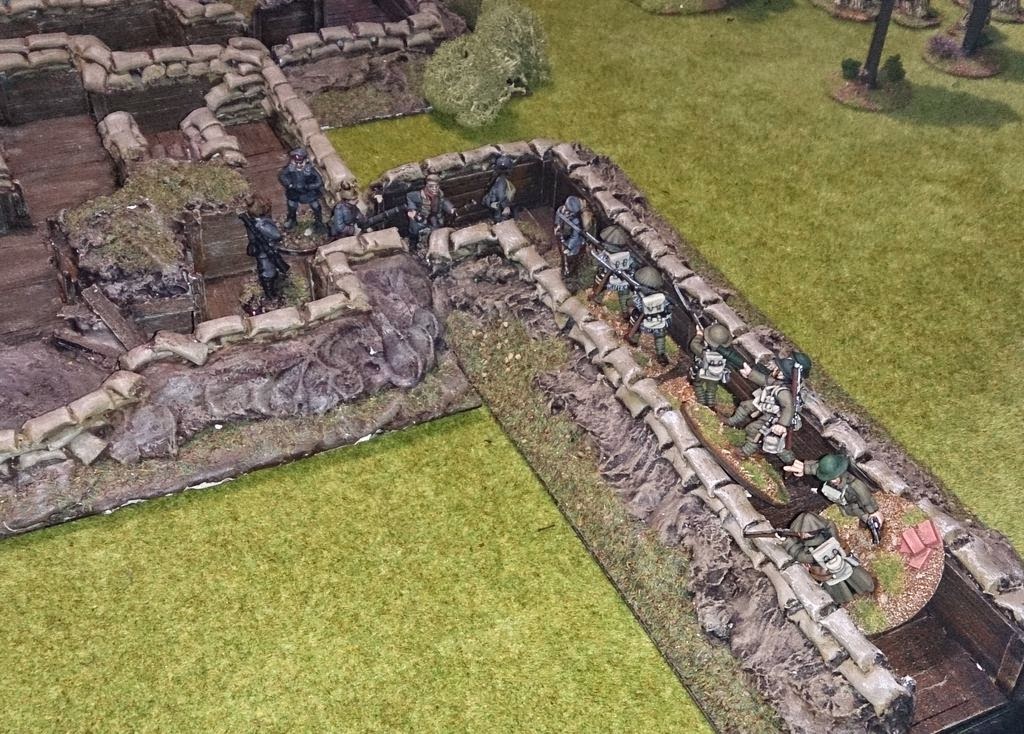 With that we called time on action. Both sides were badly mauled but the Germans had just about held on to their position. We agreed on an honourable draw.

Brigadier Orange also has this rather spiffing 'troop transport' (a.k.a. bus) for his chaps - it's the Sarissa model and I must say that Dave has done a lovely job on it. 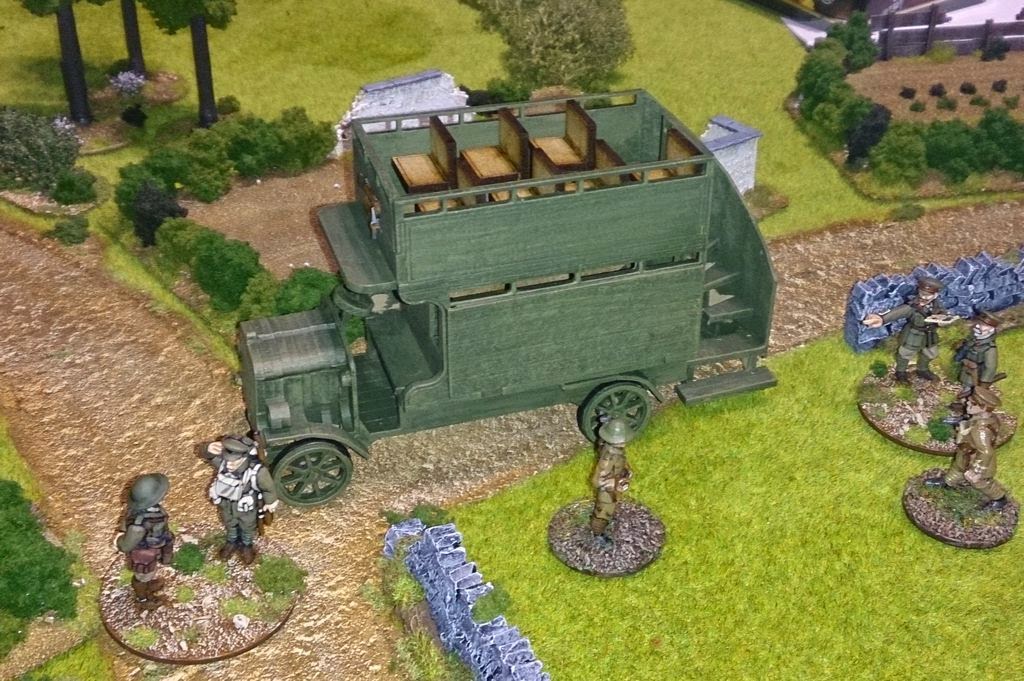 The game was enormous fun, so my thanks to Dave for running it for us. I hope that the feedback offered during the game will be of use. I certainly look forward to playing again soon!

Here's some more of my chaps. This is the third squad, all lovely Artizan Designs figures.

BTW - Artizan/North Star are having a sale so you can pick up a German platoon including a free tank - bargain! There's also deals for British and American forces.

The Obergefreiter (a 'Junior Leader' in CoC parlance) ready with his Panzerfaust. 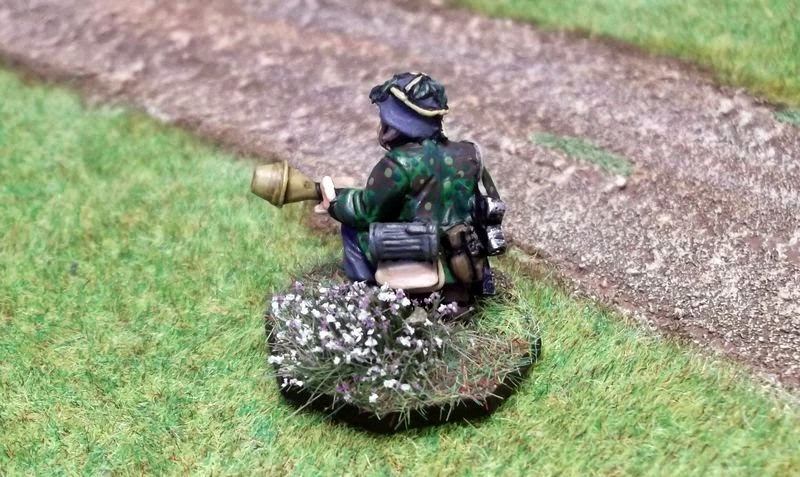 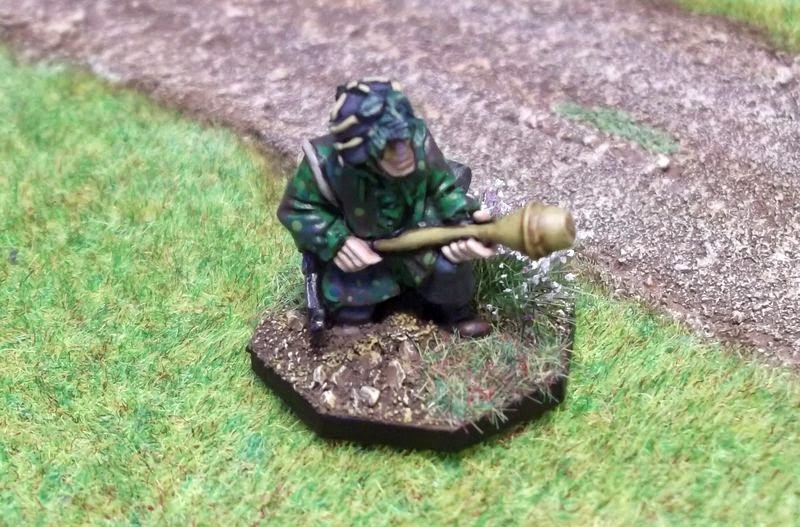 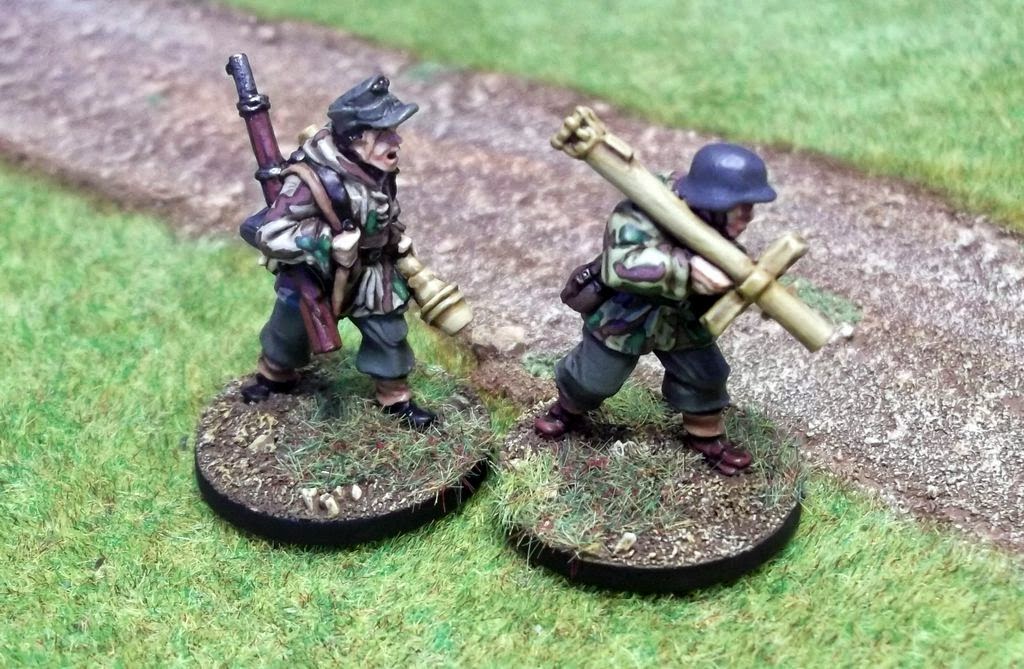 In their first outing they missed a Centaur... three times... consecutive shots. 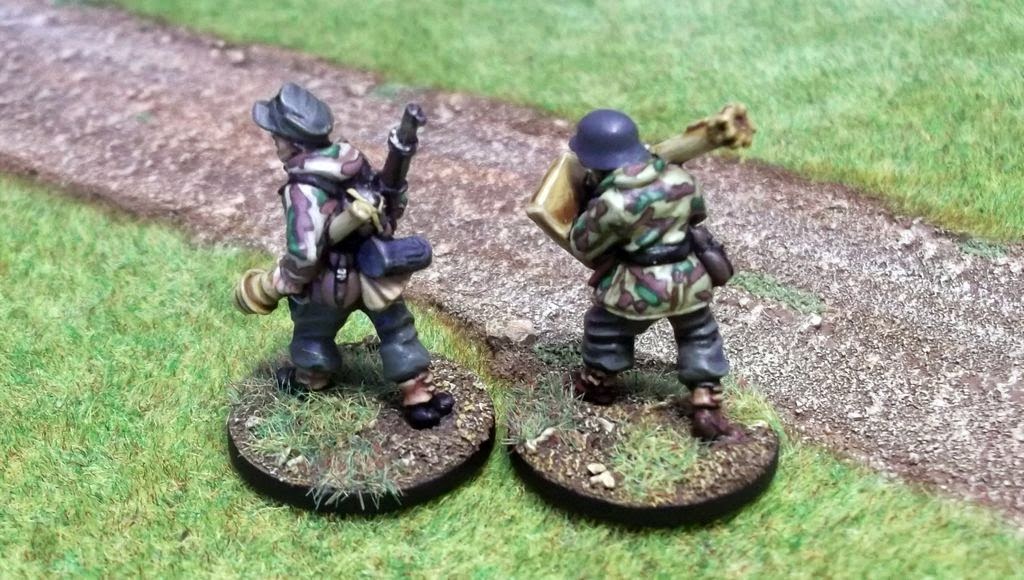 Yes, I've been painting again! :o) Here's some more Germans for my Panzergrenadier platoon for Chain of Command. First we have two Senior leaders. 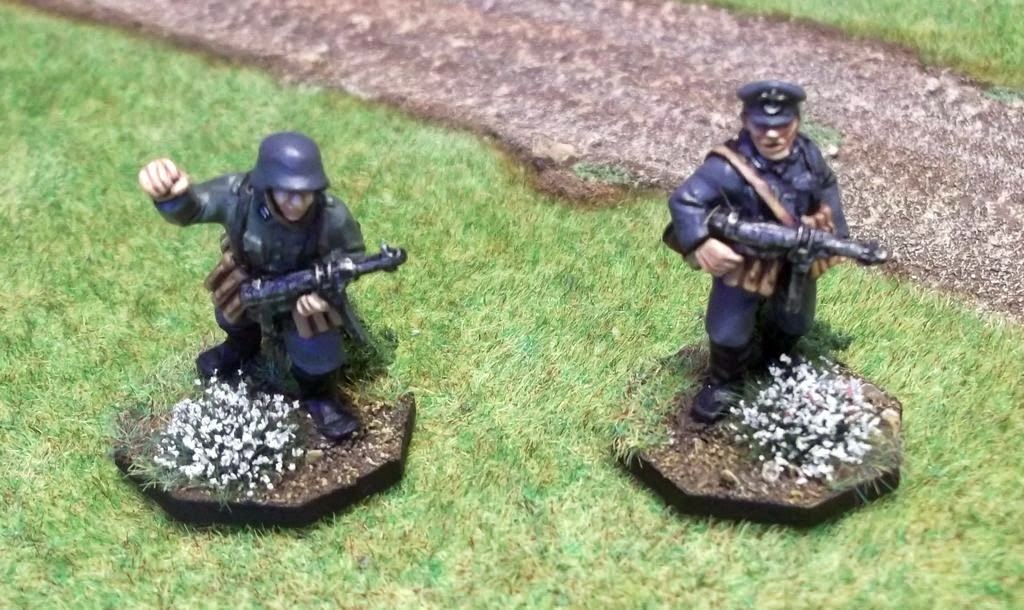 Both Crusader figures and based on octagonal bases with some flowers to aid spotting them during play. The second figure is a support list option, but I've found the extra leadership quite useful in the few games I've played so far. 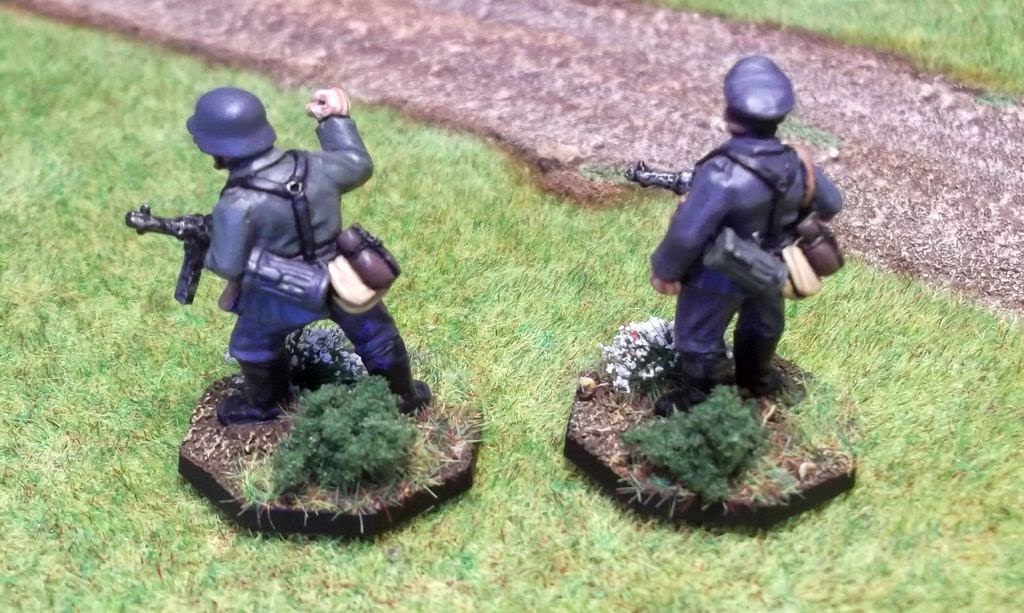 Next is a second squad for my force, consisting of a Junior Leader and two LMG teams, one MG42 and one MG34. Mostly Artizan figures.

Here's the MG42 team - I rather like the prone pose of these figures. 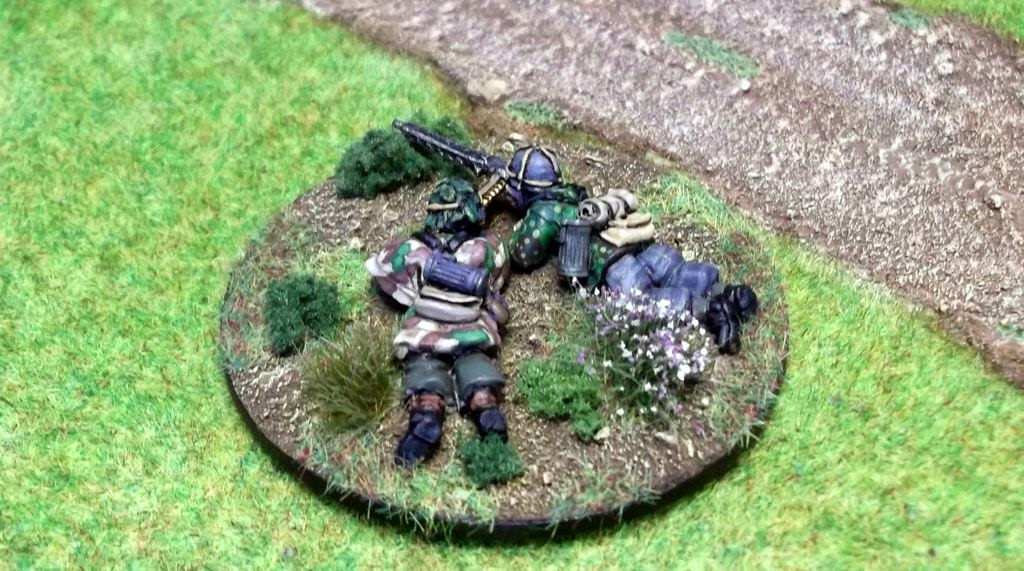 I didn't have enough MG42 teams but I did have some (Crusader) MG34's - I reasoned that if the weapons were still serviceable then some may have been in use in '44 ? 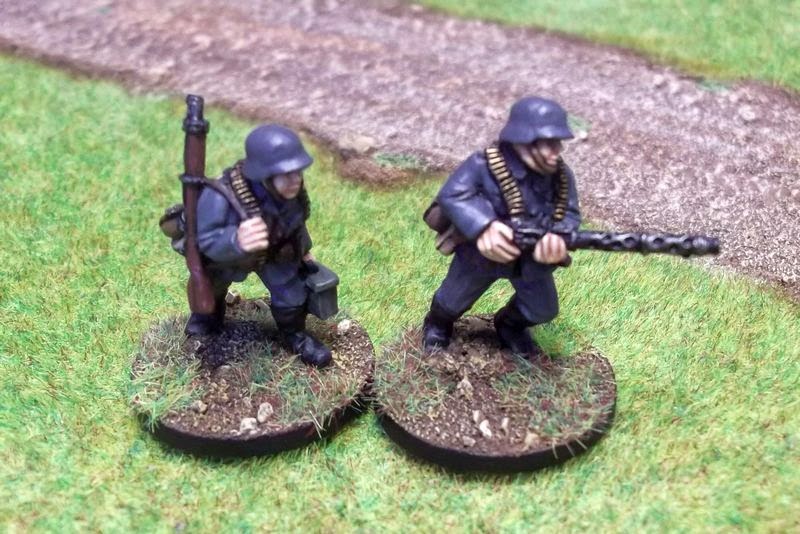 Another squad to go then it's on to the supports!
Posted by Matt at 13:36 4 comments: