Telegraph poles are one of those items that really seem to make a wargames table look like a 20th century battlefield, so I really had to get some. I considered making them from wooden dowelling, etc but then I saw these from 4Ground. 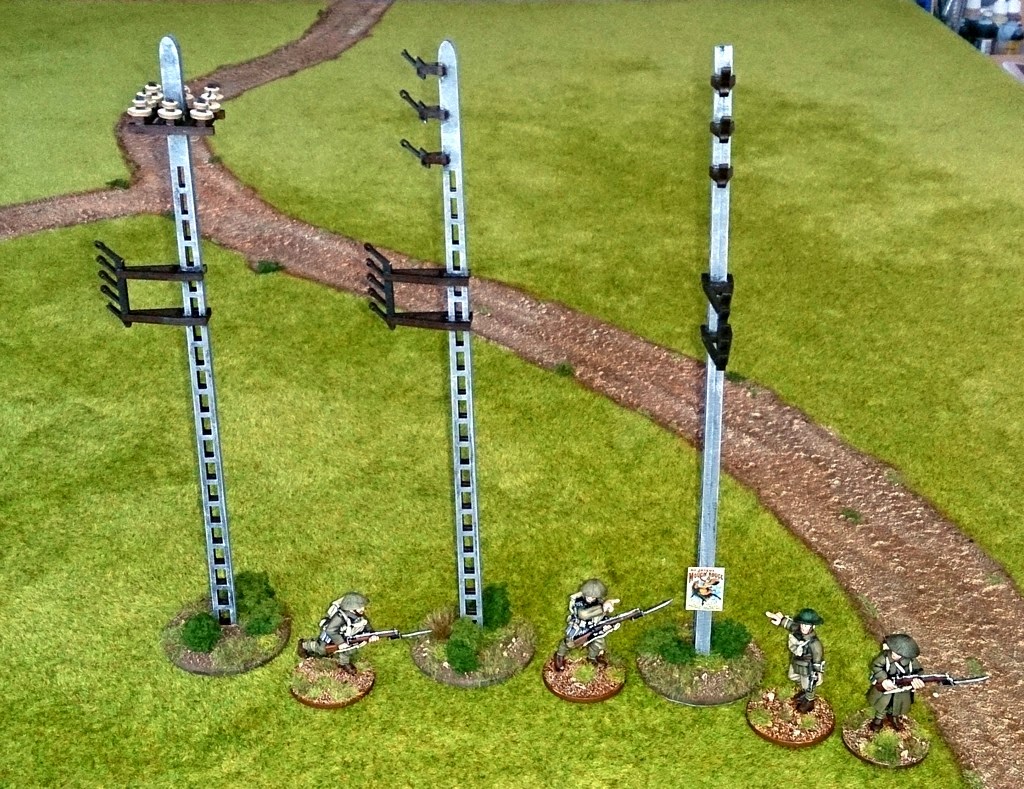 They're advertised as ready painted but I decided that they needed to look more "concrete-y" so I painted the main 'post' black then layered on the Foundry 'Slate Grey' triad. They also make good places to put signs advertising shows - as this keen eyed subaltern has noted.

Here's a closer shot of the different styles of 'tops'. The kit includes enough parts to make 7 posts with up to 2 of them being like the post on the left. 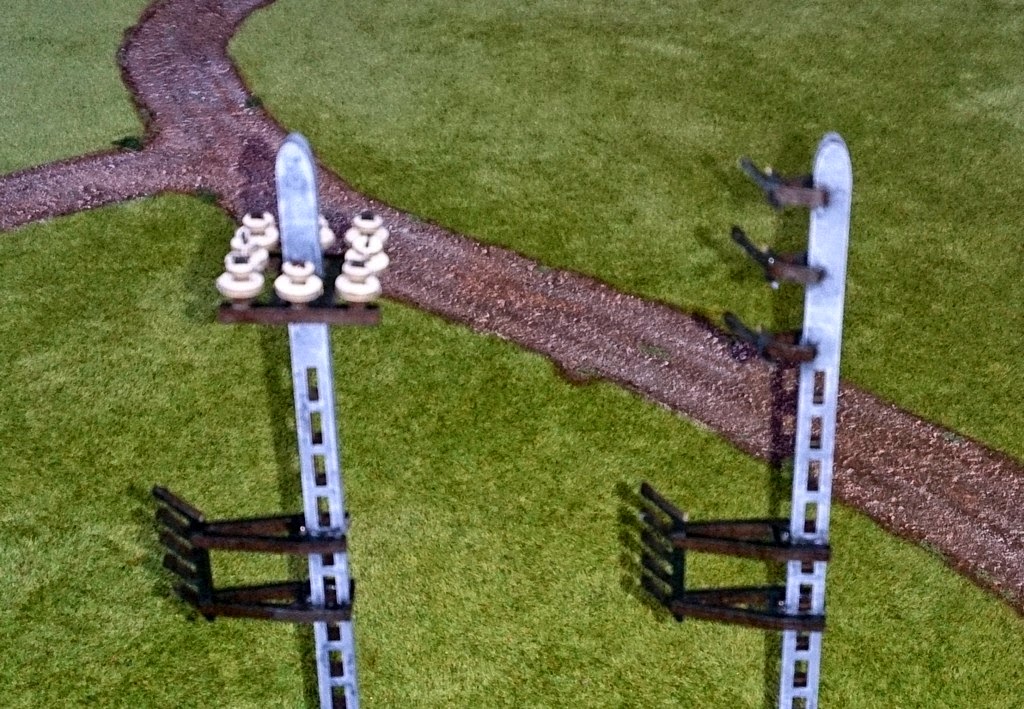 Oh - and one more thing - pay close attention to the construction diagrams when building them! They're fairly easy to build, as long as you read the notes first.

Chain of Command - Mine Counters

A quick post to show you some counters I made today to represent minefields in CoC. Here are the Allied counters.

They're simply 50x50mm GW bases covered in sand and flocked etc to match my other terrain items. The posts are just chunky matchsticks and the signs were created in Microsoft Word and printed on a decent quality laser, then backed with thin card. I chose 50x50mm bases as, being effectively 2 inches by 2 inches, it should be straightforward to imagine a further 2 inch 'zone' extending around them. I had initially planned to make some 6 inch by 6 inch bases in MDF but realised that, given the often very scenic nature of CoC tables, they might be quite tricky to place amongst hedgerows, etc.

As you can probably tell we're getting quite 'into' CoC here at the "table". Plenty more figures and scenery to follow. :o)

Saturday evening... With two defeats already under my belt I was keen to do much better in this game. It's 1918 and the German Spring Offensives are in full swing. Two patrols encounter each other somewhere in the French countryside east of Amiens... Here's the table. 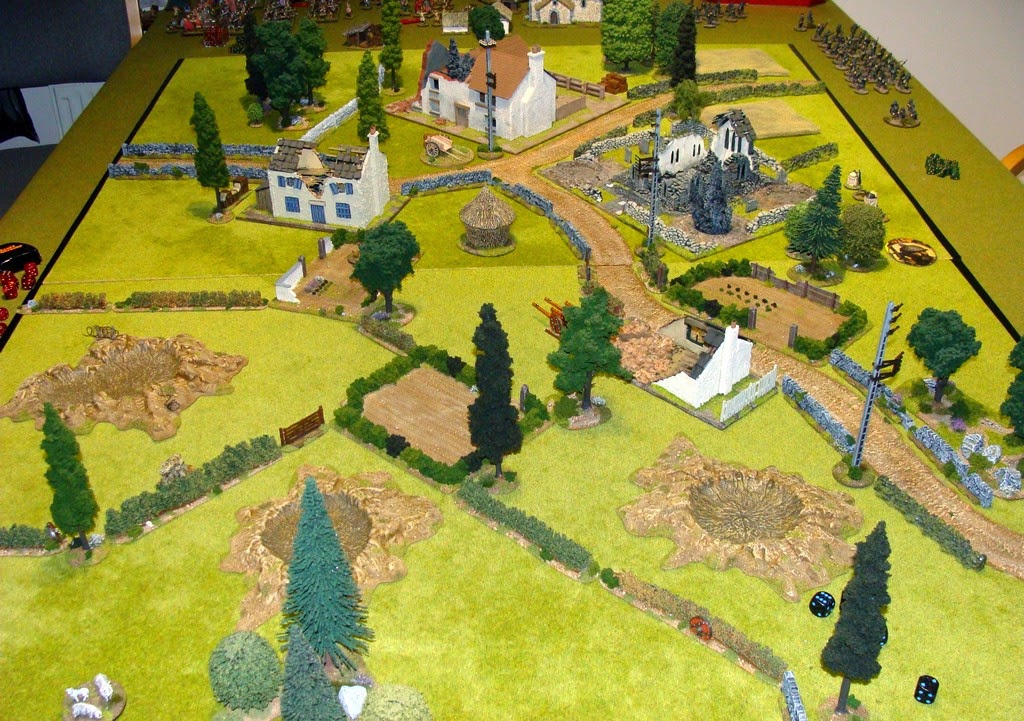 And again from a different angle. Phil had kindly brought along some of his ruined buildings and other scenic bits & pieces. 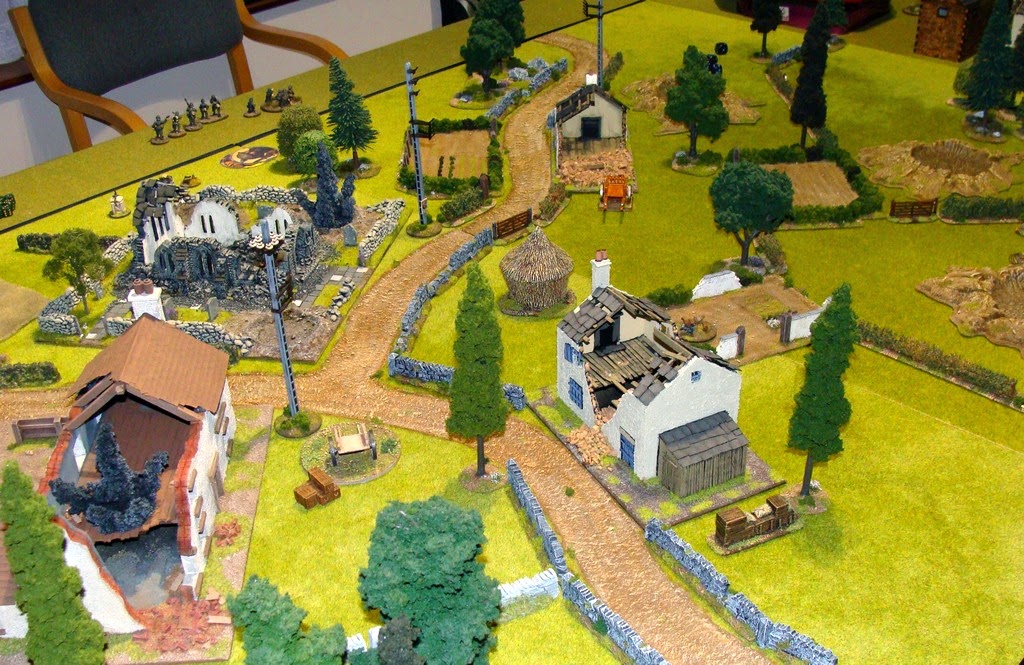 Here we see that the Germans have quickly occupied the ruined church and brought forward an MG08 to support the advance. My wife Jenny started leading the British in this game but as time was getting on she went to bed and Phil (who up until that point had been busily polishing his dice) took over. In the background you can see some BEF behind the wall - probably eyeing up that house as a good point to launch a flank attack against the Germans. 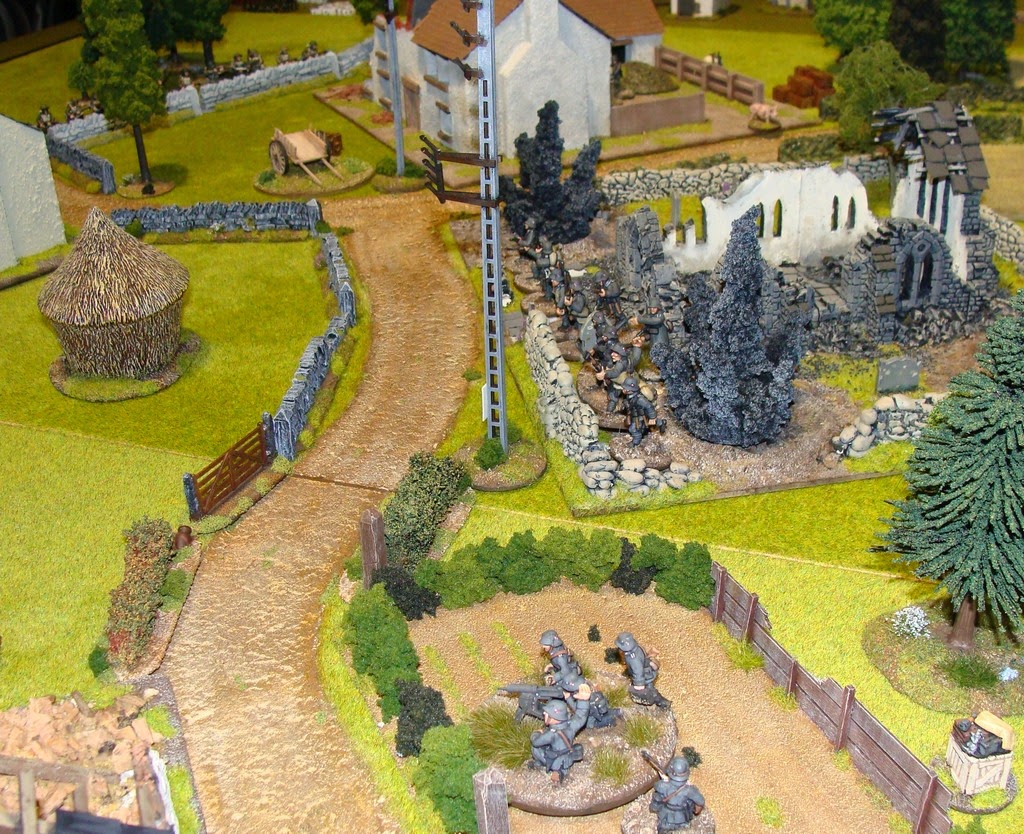 More BEF in the centre of the field. They have brought up a Vickers to try to keep the German's heads down! Note the little shock marker - a yellow dice in a scenic 'pot'. Phil forced his poor children to work for nothing to produce these - what a slave driver eh?

At this point in the game both sides have brought on all their forces (basically a platoon with an HMG in support) and are inflicting shock, but very few casualties.

"It's no use chaps ... the blasted Boche are already in the farmhouse ... let 'em have it!"
The Germans quickly occupy the ruined house - an ideal vatange point from which to shoot at the Tommies. 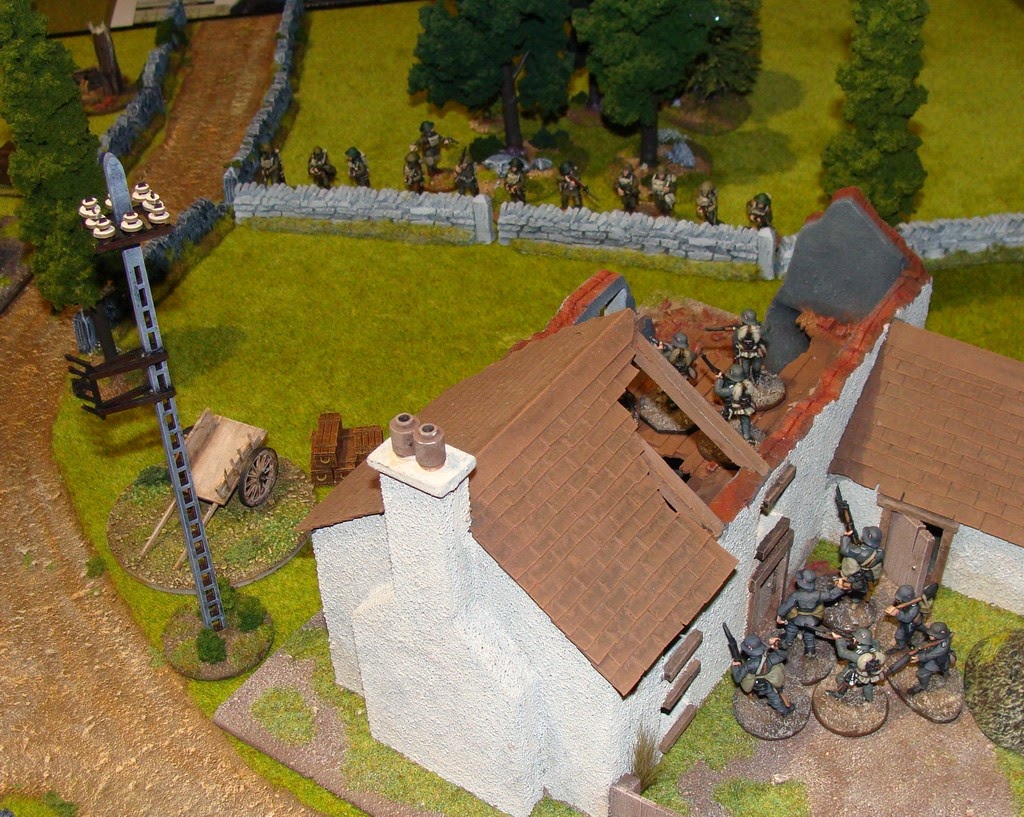 This part of the battle became a close range firefight in which (amazingly) the British gradually gained the upper hand. It's Phil and his bl**dy dice again!!! 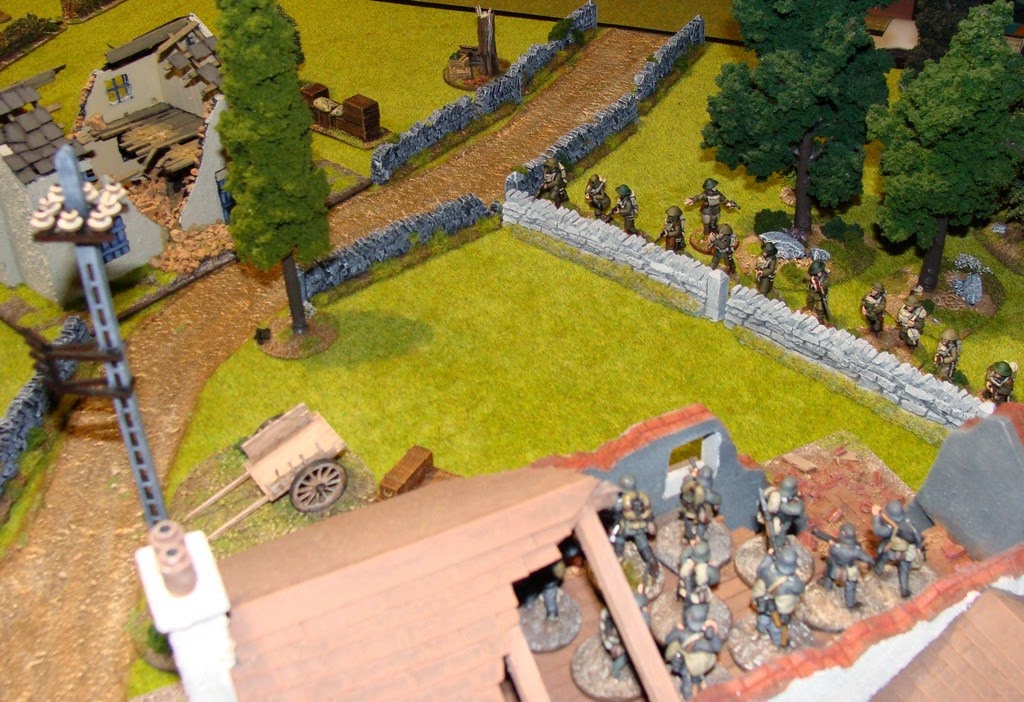 The BEF bring a section across from the centre to decide the issue against the Germans in the ruined farmhouse. 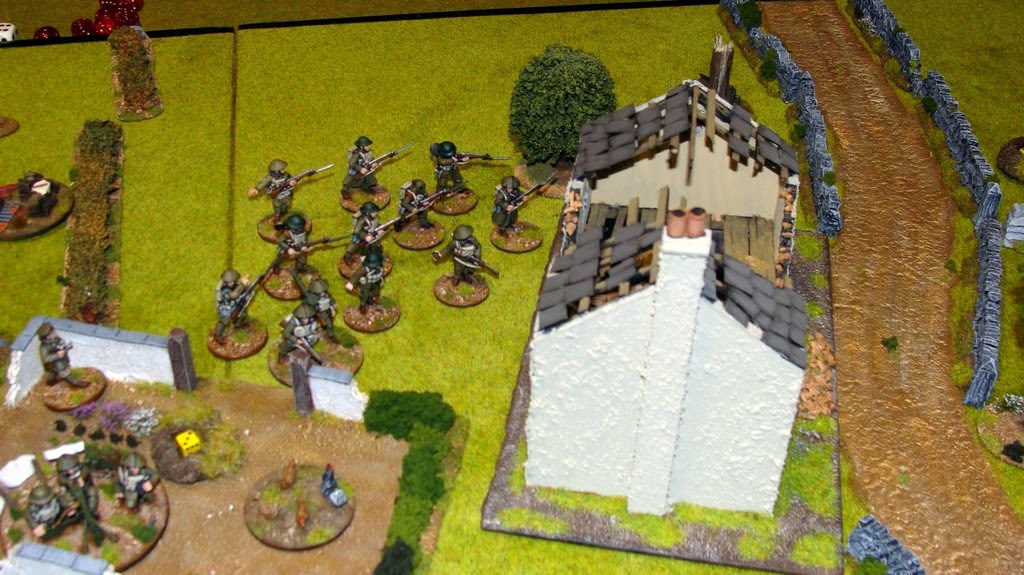 But by the time they arrive it's clear that the Germans are on the back foot, so they head off along the road towards the German centre - accumulating shock as they go. 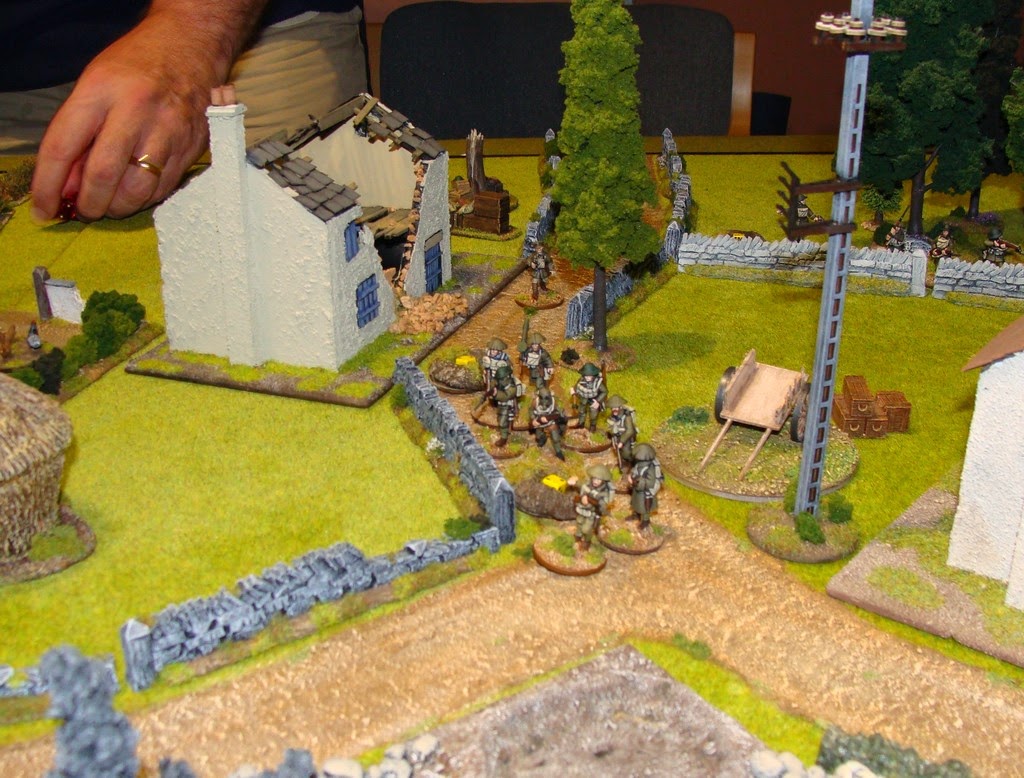 As they near the Church they go "tactical" - hence the corrugated iron counter. 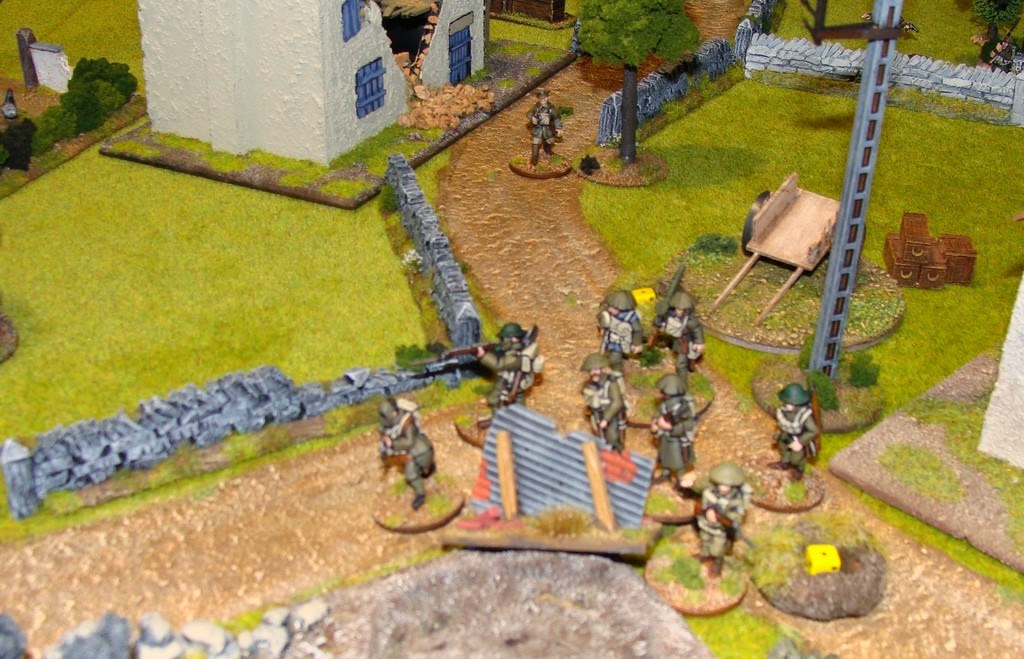 During this time the Germans in the centre have not been idle. The MG08 had dealt with the Vickers but was then itself eliminated by concentrated British rifle fire. Another German section had advanced on their left flank and took their bayonets to a detached Lewis Gun team - but at what cost!! The Lewis was eliminated but the casualties inflicted on the German section were horrendous. This, along with other incidents across the field, were taking a heavy toll on the German morale. Soon I was down to 4 command dice, then 3.

The pig makes a run for it! 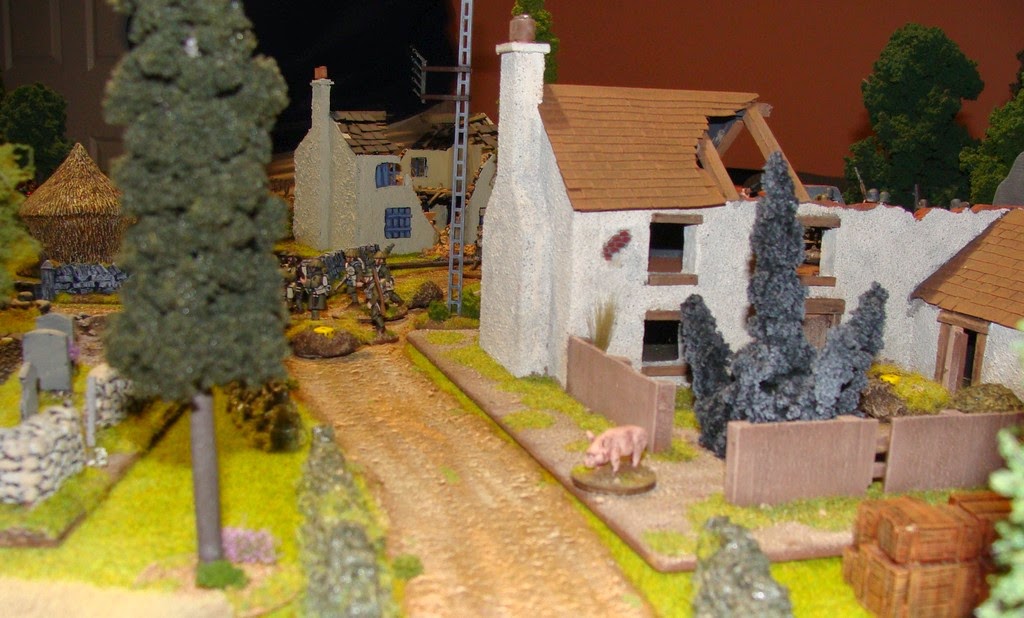 The key moment in the final stage of the battle was a grenade duel in the ruined church. But again the British had the best of it. With that the German morale was reduced to zero and it was a win for the British forces ... and Phil. 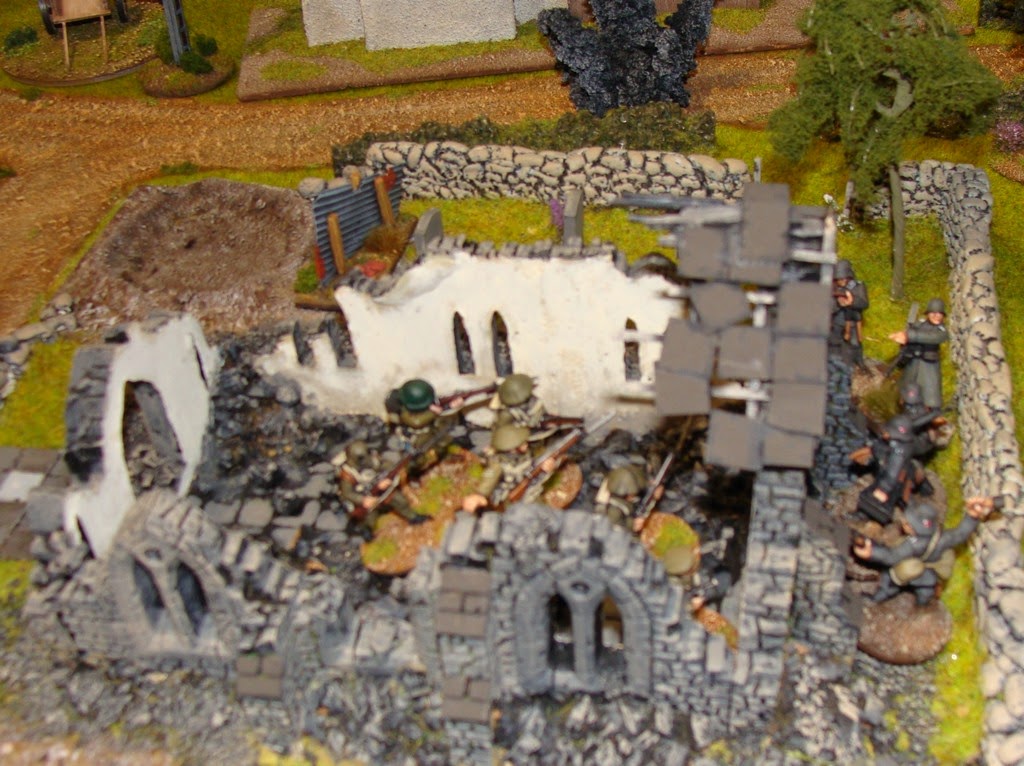 A simply spiffing game! Thoroughly good fun all round, played with a gentlemanly air of good grace and fair play. Chain of Command is rapidly becoming my absolute favourite set of rules.

The final report from the weekend - a big game of Dark Ages War & Conquest from the "Age of Alfred" - will follow in a few days. After that ... well, it will hopefully be something slightly different ;o)
Posted by Matt at 11:06 4 comments:

Saturday afternoon saw us clear away the Romans (with a dust pan and brush?) and Germans and bring out the Saxons and Vikings. This time it was 3,250 points per side. As Phil kindly noted in a comment on my last post, my dice rolling had been frankly appalling in the morning so I was hoping for some kinder dice in this game ... Hmmm?

Here's the deployment. I concentrated my Danes on one flank hoping to overwhelm part of the Saxon force before the rest could arrive to help out.

Phil has most of his units fielded as a front rank of good/expensive Thegns, backed up by 2 ranks of the weaker Ceorls. All nice and historical. But that does mean there seems to be rather a lot of them! As Phil's skirmishers advance, one of them stops of enjoy the local leisure facilities. Yeugh! 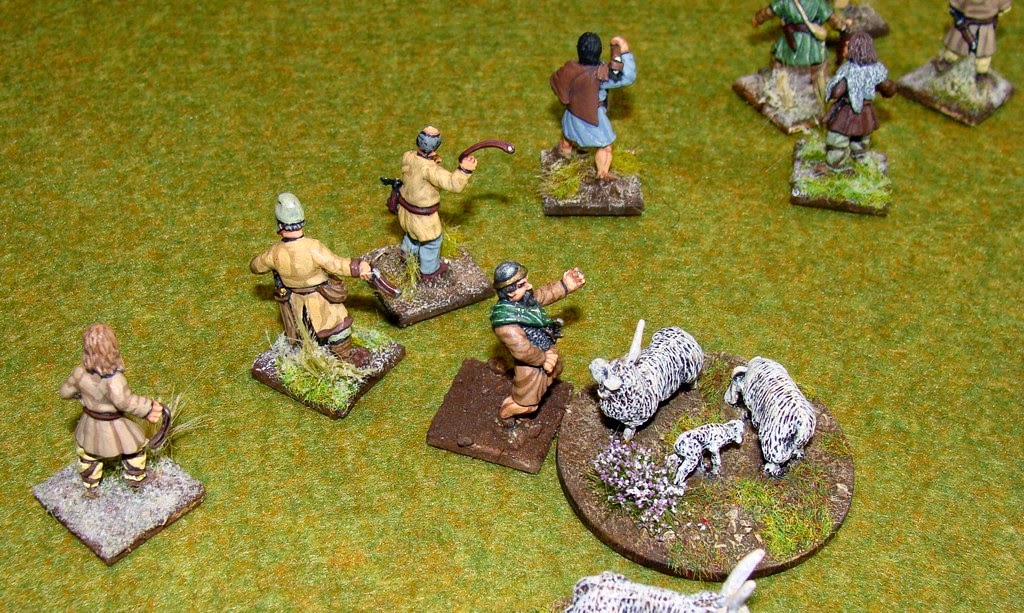 With both armies keen to get to grips with one another, it soon was time for a clash of shieldwalls. Here we see a unit of Hirdmen led by a Jarl plough in to the shieldwall of a unit of Thegns/Ceorls ... get 'em lads! 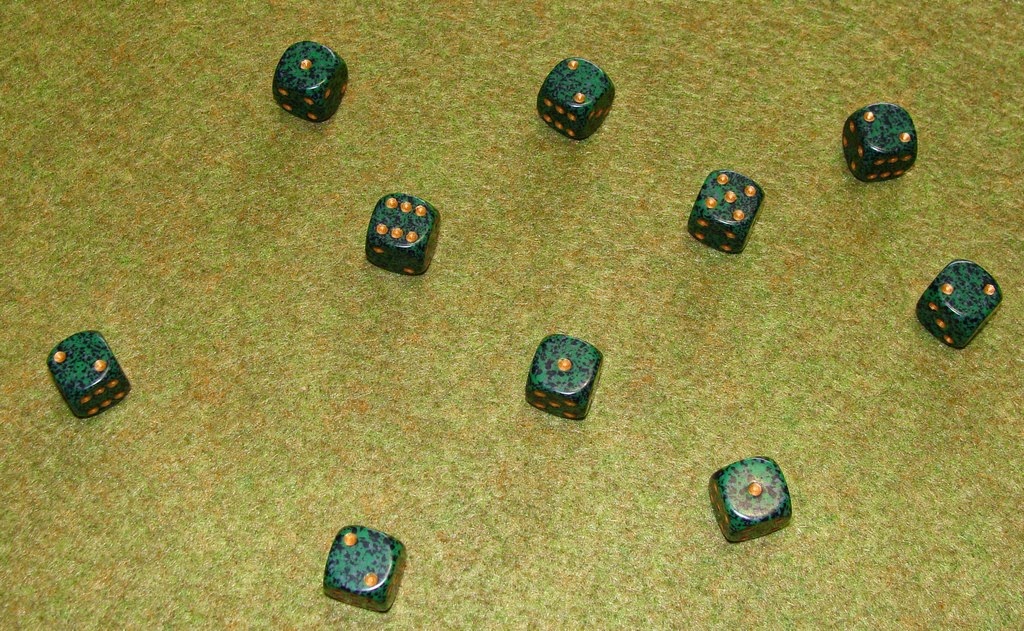 The red 'Retreat' arrow in the picture here tells an all too familiar story. Only on the Viking left flank (ironically held by allied Saxons!!!) did they give as good as they got or better.

Alas, the few other pictures I took of this game were all a bit rubbish, but safe to say it was a sorry tale of woe for the invading Danes!

A solid victory to the Saxons of Kent and another for Phil ... this was starting to become something of a habit!? Another good game - if slightly depressing for the Vikings at certain moments!!! ;o)

We cleared away the carnage and began setting the scene for some Chain of Command 1918 style. More on that in the next post!
Posted by Matt at 19:32 5 comments:

As mentioned in the British Paras post, a few of us got together last weekend for some gaming fun. Saturday was a mix of War & Conquest and Chain of Command. Sunday was purely a big game of War & Conquest. I'll cover these in a short series of posts - please don't expect detailed battle reports though - I was more interested in gaming than taking lots of notes.

Here's the first of Saturday's games: Phil T's German "Barbarians" led by the fearsome Warlord "Philarminius" vs my EIR (with Gallic allies) led by the newly appointed Legate Gaius Maximus Bellendicus. The game was 2,500 points per side. Here, somewhere near the Rhine, the armies deploy for battle. 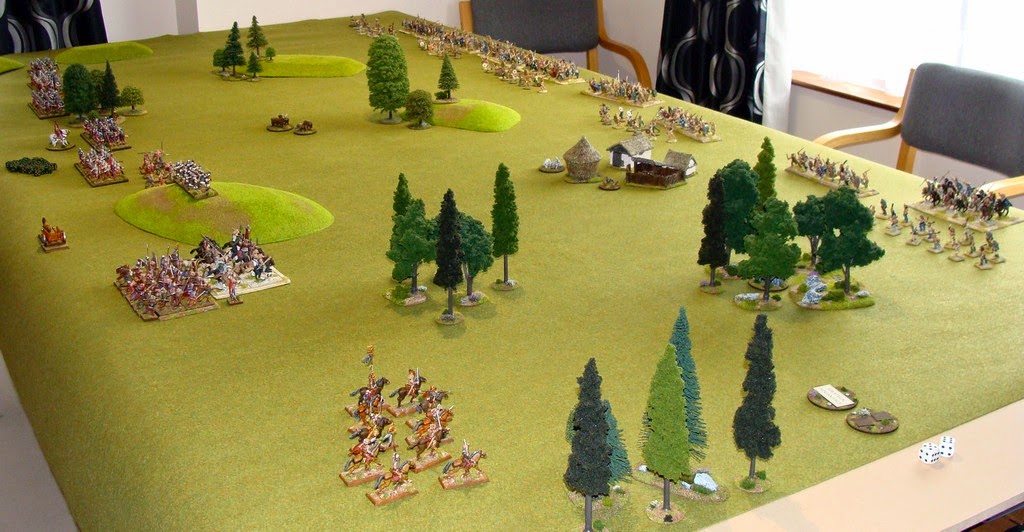 A couple of turns in and both armies are manoeuvring for advantage. Crumbs that's a lot of angry Germans! 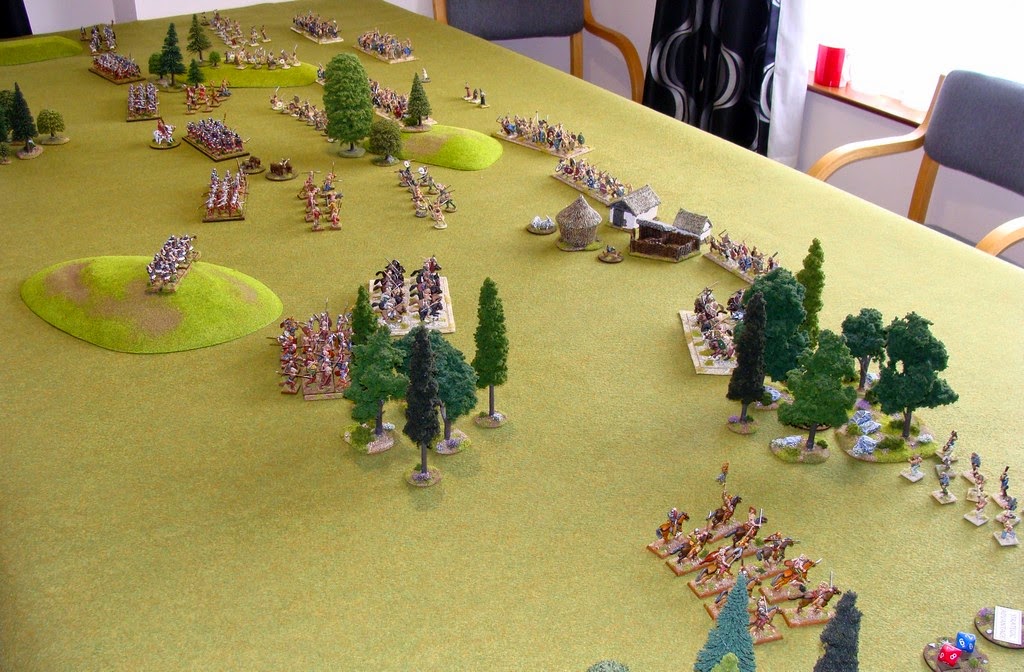 Phil's left flank: His Nobles square up to the Roman Auxiliary cavalry (although they're actually spare Germans - but hey!?) 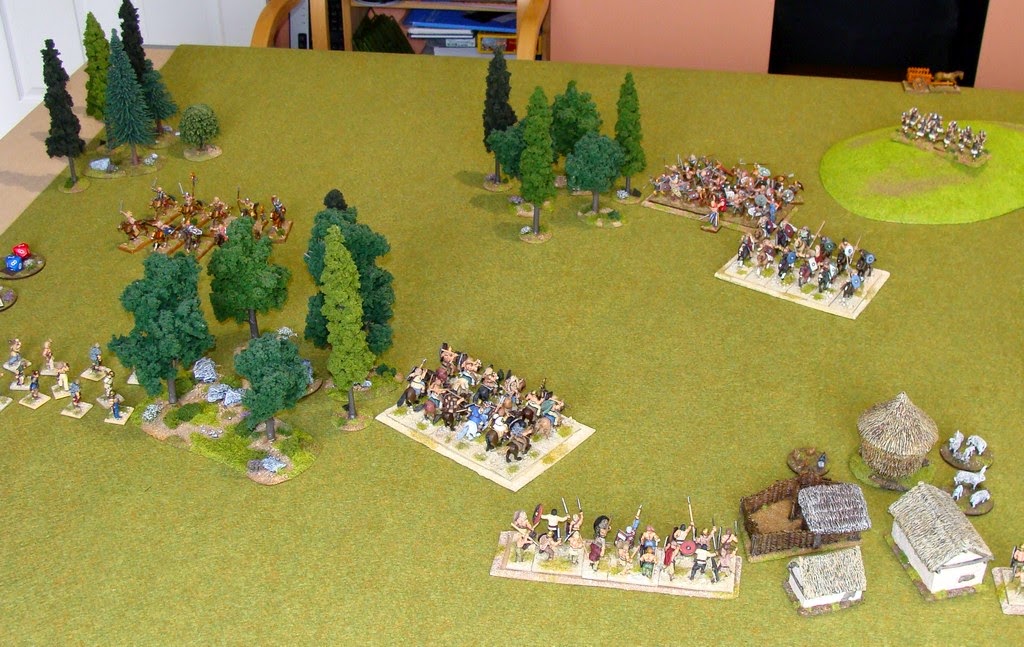 A view along the lines. 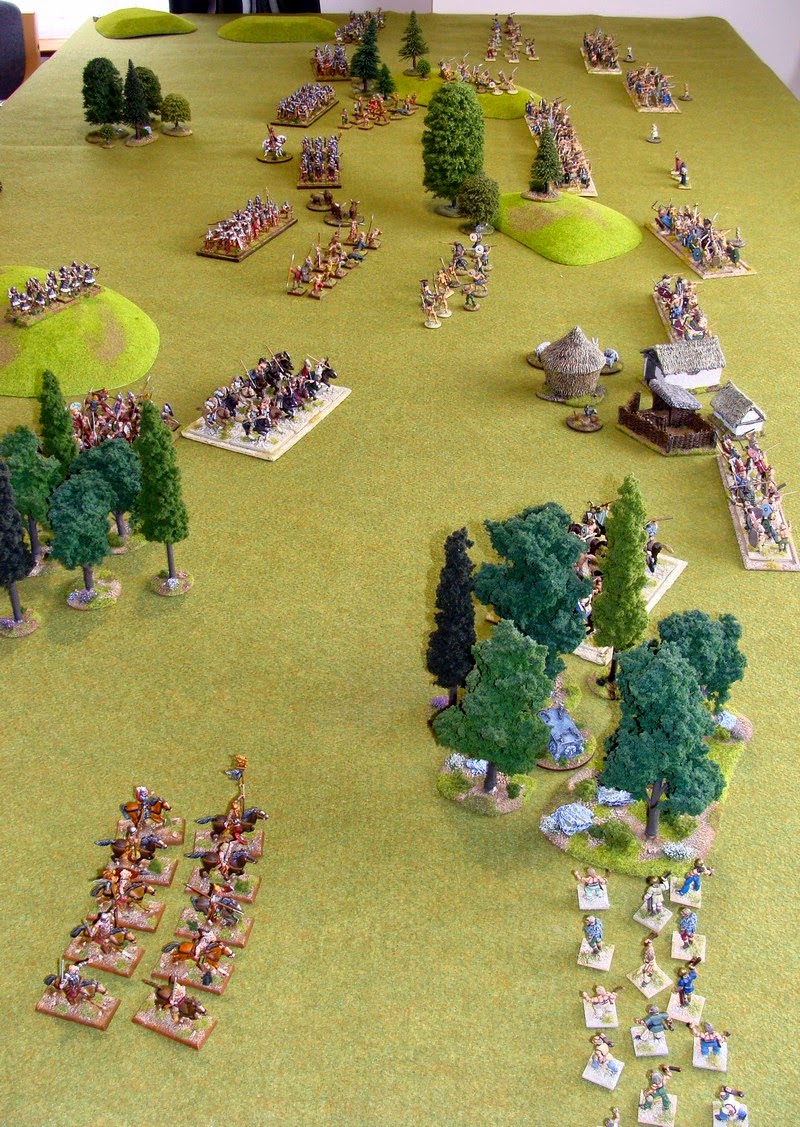 Now, apologies for the slightly blurry photo (my camera occasionally goes in to "special mode") but I wanted to show you two things here: firstly how games of WaC often develop in to a series of long-ish lines of troops - especially in the centre - which seems quite "realistic" to me. Secondly, my "plan" - use the centre legions to break the German centre, whilst the other legions hold the centre-flanks. Hmmm ... plans are nice aren't they.

Well bang goes that theory - as La-dee-da Gunner Graham used to say - the centre legions both fought like wombats and were routed, the legion on the left (out of shot) held, but the on the right they legged it to!!!

"Run lads" ... I roll the 3D6, the two lowest being the distance fled by heavy infantry ... they rolled 1, 2 and 3. Needless to say the barbarians had little problem running them down, including the General. 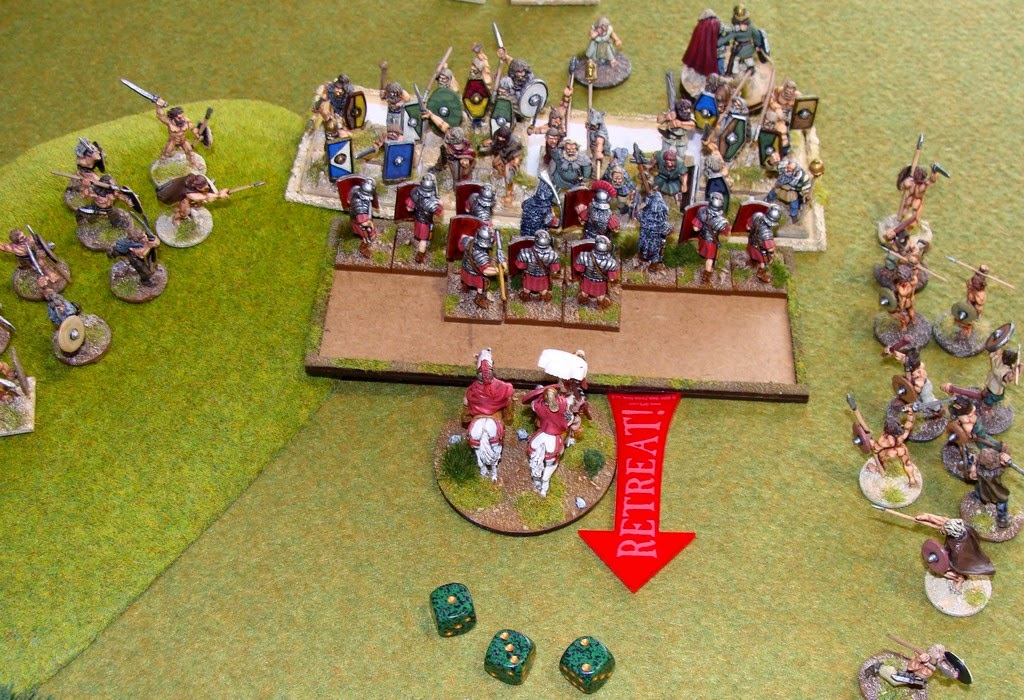 The other centre legion was caught in a subsequent turn - in WaC fleeing troops are very fragile so if you can get your own troops in to them before they rally then they are slaughtered.

A solid and well deserved victory to Phil, and a good game to boot! Next post will see me trying to avenge the defeat by hurling Vikings at Phil's Saxon shieldwall.
Posted by Matt at 15:21 2 comments: