If you've picked up the latest Wargames Illustrated (Issue 323) then you will have probably read about the new offering from Osprey Lion Rampant, penned by one of my favourite games designers, Dan Mersey. I already have his Dux Bellorum rules, which although I've not played, do look to be superb. Therefore I have high hopes for Lion Rampant. 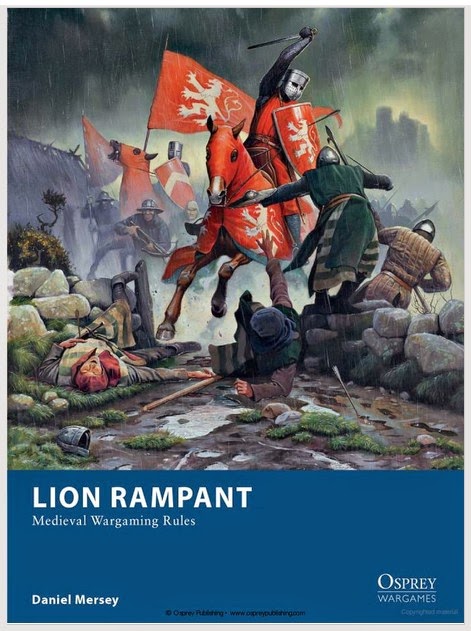 The medieval era is one that really lights my imagination, whether it's early medieval such as Normans, Saxons, etc, or later such as the HYW or WotR. Not for nothing did I have a large Bretonnian host back in my WFB days! But ... I've never really enjoyed playing huge medieval battles. They always seem to be a bit "line up and bash each other" type games. So the idea of playing dynamic skirmish games with bold knights, trusty sergeants-at-arms is too good to pass up.

This really is a classic case of a wargamer seeing the latest shiny thing, but hey it's a hobby, so let's have fun!

Since I already have quite a few psuedo-medieval figures (from the aforementioned Bretonnian army) that would serve as as good stand-ins, then it's not quite such a daft plan as it might first appear. It certainly sounds like you don't need too many figures.

Speaking of figures ... Those plastics from Fire Forge Games look ace! Then there's the Perry plastics WR1,WR20,WR40 and WR50.

I'll defintely be getting a copy of this book!
Posted by Matt at 12:54 7 comments:

Chain of Command requires the use of a number of markers or 'counters' to keep track of what troops are doing. You can purchase a perfectly usable set of plastic tokens from TFL. These do the trick admirably but I prefer to create my own more scenic versions - if possible.

When troops are moving 'tactically' they are moving more slowly in order to make the most of any cover. In game terms this means they have an improved cover save. To represent this I've made a small set of scenic features to place in front of the troops to indicate this 'tactical' status.

First, some bullet riddled corrugated iron for when troops are moving amongst buildings. 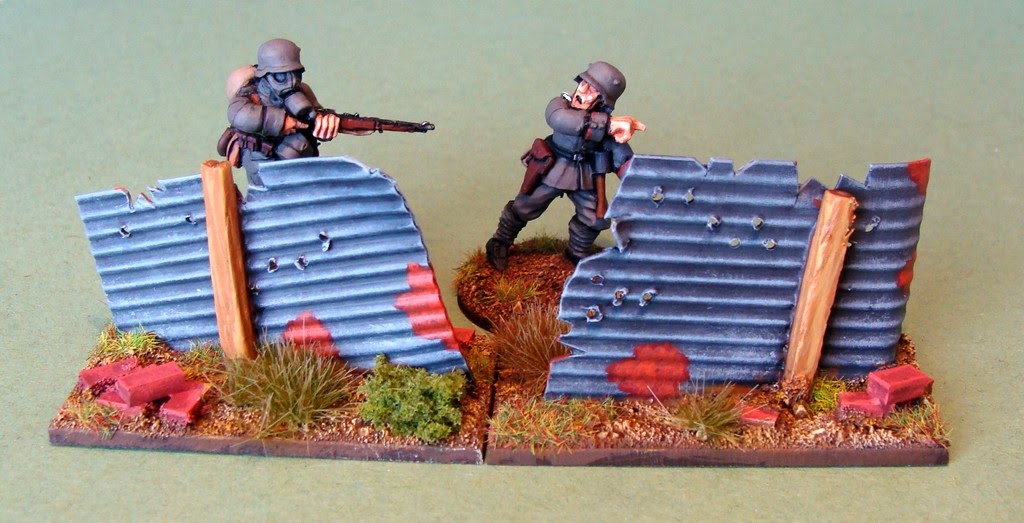 The reverse in more detail. They're just offcuts of corrugate plasticard with some bits of match stick and plastic bricks.

Here are some fences - ideal if troops are moving tactically across farmland. 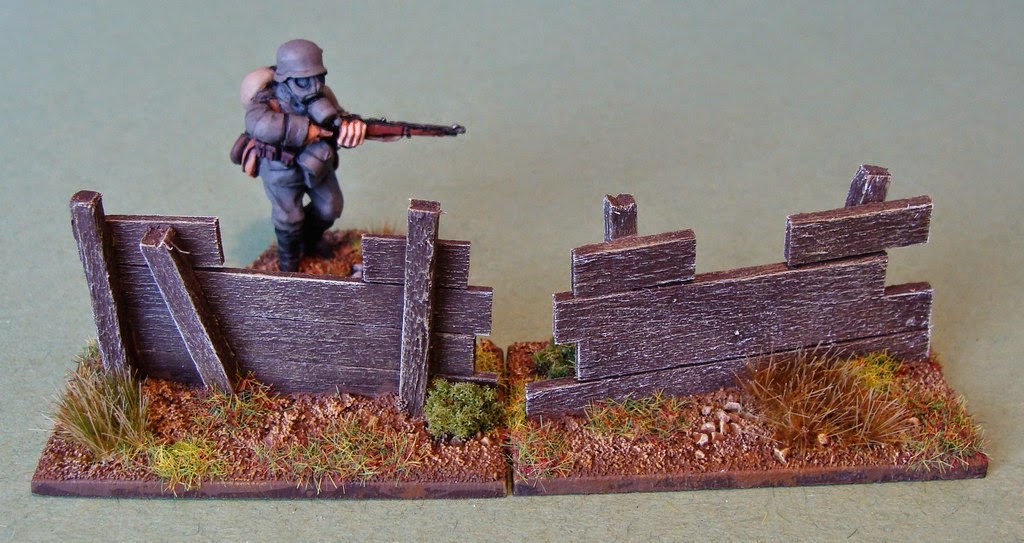 These are meant to be either bushes or parts of a hedge for when troops are crossing more open areas. 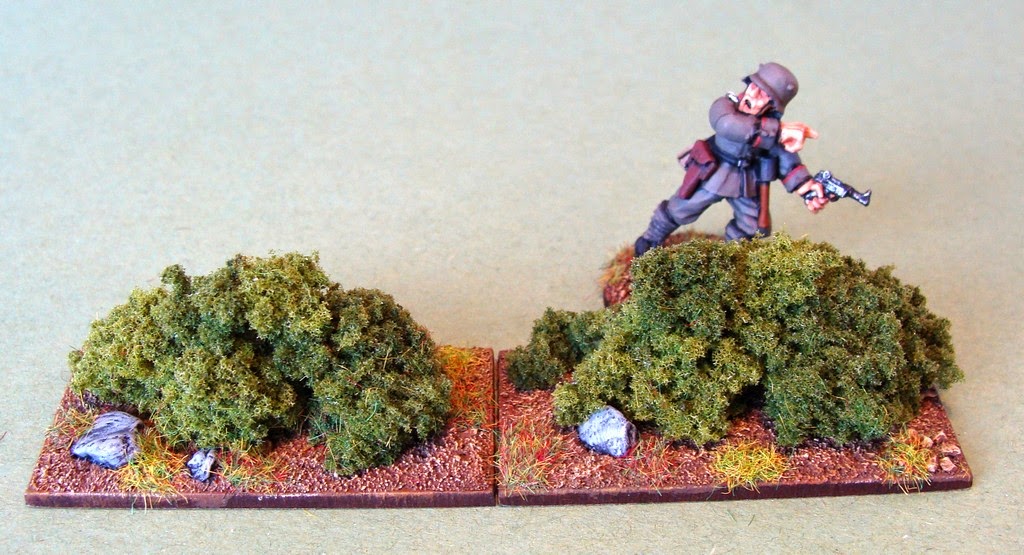 They're all based on Warbases MDF 25mm x 50mm bases. I shall probably make a few more, may be some with tree trunks, or brick walls?

Also in Chain of Command, troops may become pinned down by enemy shooting. To represent troops 'pinned' in this manner I've made a counter that supposed to show the ground erupting in puffs of dirt as machine gun fire strikes the earth. 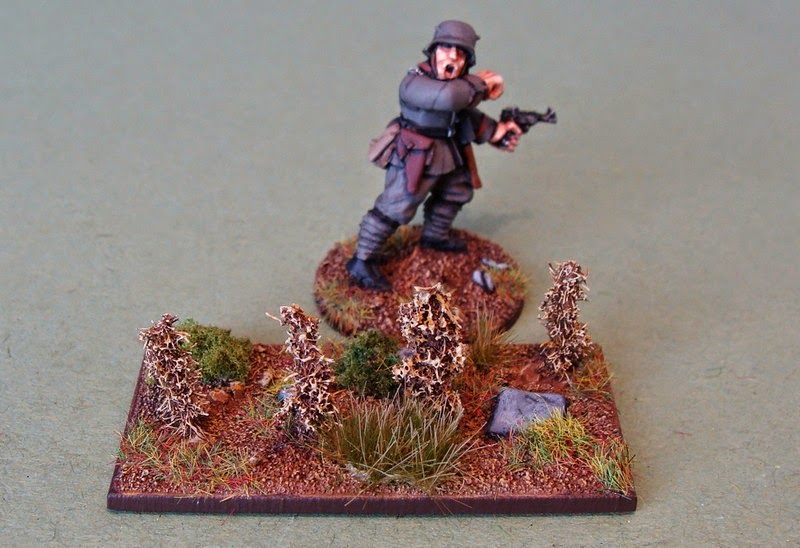 I'm not sure if it really comes across well in the photo? 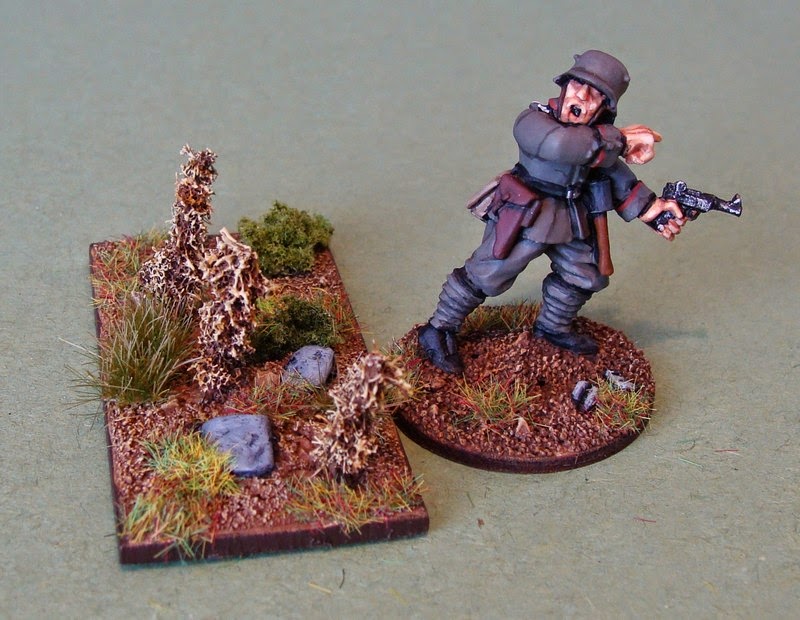 Again it's a cavalry base with some short lengths of brass rod inserted at a slight angle. I glued some clump foliage to the rod then (when fully dry!) gave it a couple of coats of brown spray paint - this toughens the foliage considerably. A few highlights of light brown/cream and model the base to match the others. 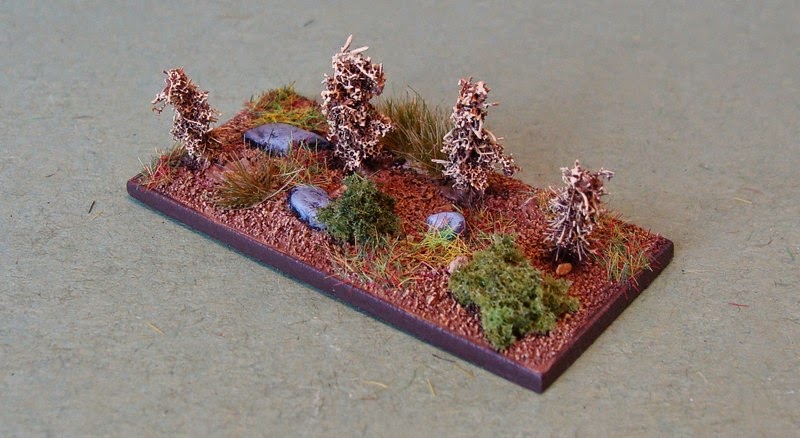 Here are a few more in in progress.

I've also realised that whilst a single base can be used for pinning, two bases (4" width) would be useful for representing Covering Fire in CoC.

Definitely interested in your thoughts on these counters, especially the covering fire pinning counters.

Yes I have been at it again with the brushes! After seeing Dave and Dan's lovely Viking and Irish figures at the recent Devizes show I was inpsired to paint these fellows.

I have really enjoyed painting them; it's quite some time since I did any 'proper' painting. By that I mean not using the dip. For these I start from a black undercoat and apply a Foundry-esque style three colour process.

Here they are with their shields (LBMS of course!). 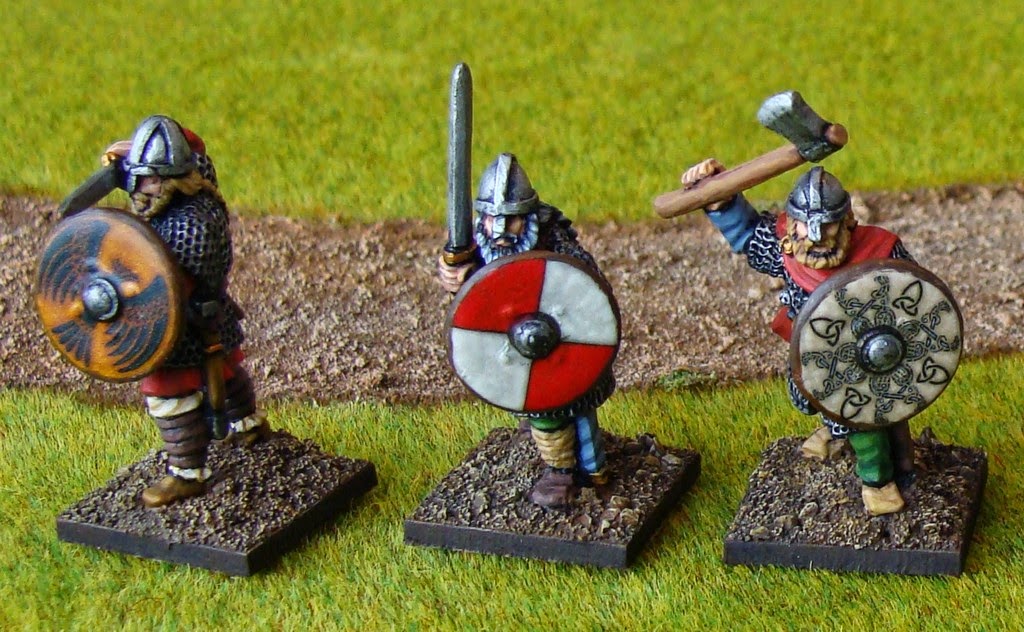 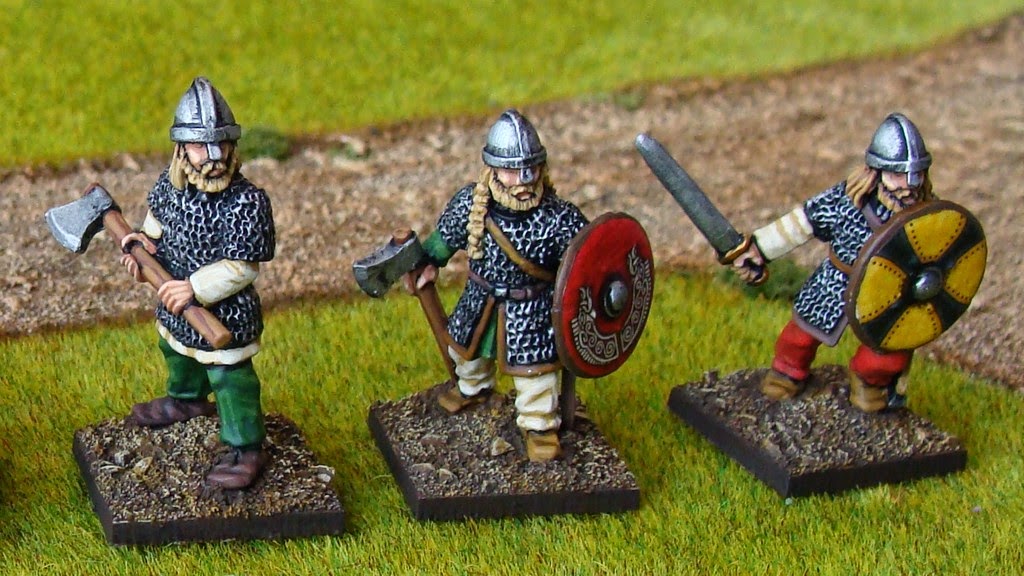 I hope that these will be start of a Norse/Scots force. All Crusader figures apart from the chap with yellow and black 'raven' style shield - he's a GB Early Saxon!.

Finally ... things on the blog will go quiet for a bit as we'll soon be off for our Summer holidays!

At last! My first game of Chain of Command courtesy of chum Steve who was kind enough to stage the game last Sunday evening at the club. Not only did he guide me through the rules (which are truly superb!), he also provided all the miniatures and scenery! Thank you my friend :o)

Anyway, here's the table, a sleepy farm somewhere in Normandy, Summer 1944... I chose to lead the Germans and Steve led the British. At this point we've completed the Patrol Phase (an igenious idea) so if you look carefully you can see my jump off points on the left, in the wood, behind the crops and behind the house, whilst Steve's are behind the barn, on the road (top right corner) and one out of shot on the right. 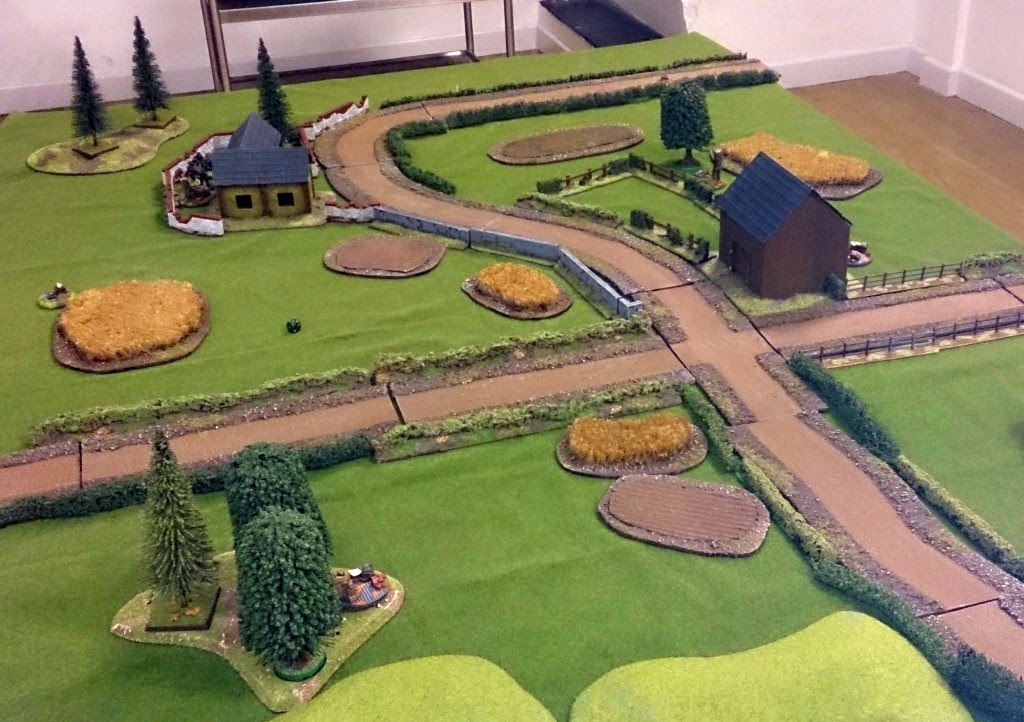 We used basic forces with no support options. The Germans had a slight advantage in Morale, which was useful as we were playing the Patrol scenario. Here I've deployed one of my sections behind the house. 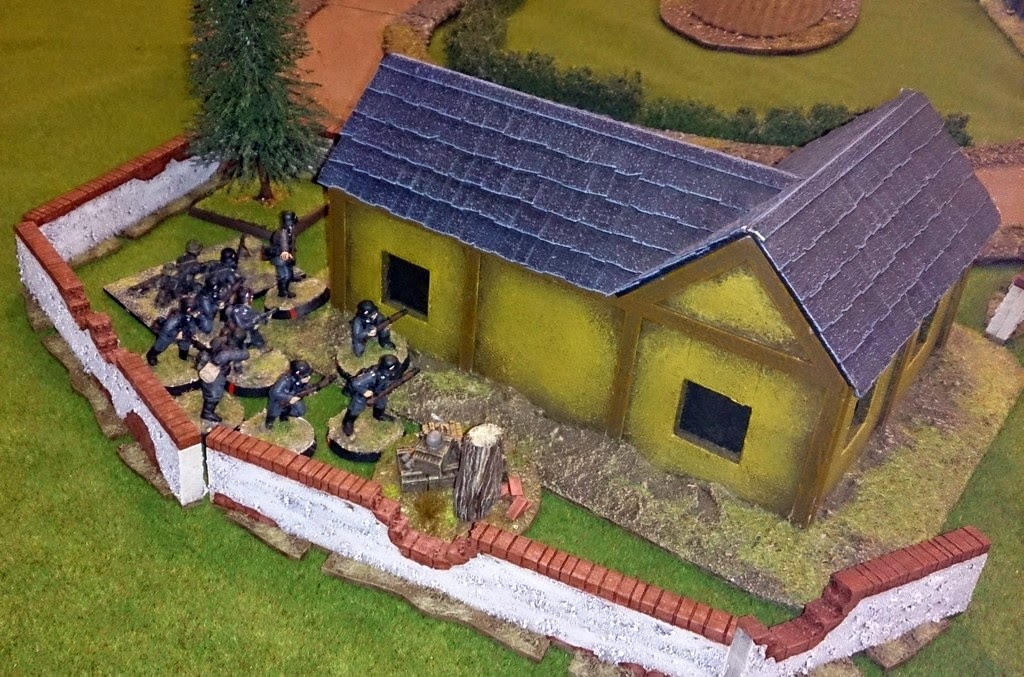 To be able to move, fire, perform actions, etc, you first need to roll a set of Command Dice. Each score allows you to do something different with a section, a leader or a team, or the scores can adjust the phase sequence. A very good mechanism indeed!

My initial dice rolls were kind and in the pic below you can see that I now have all three sections of my platoon on the table before Steve has brought any of his troops on. 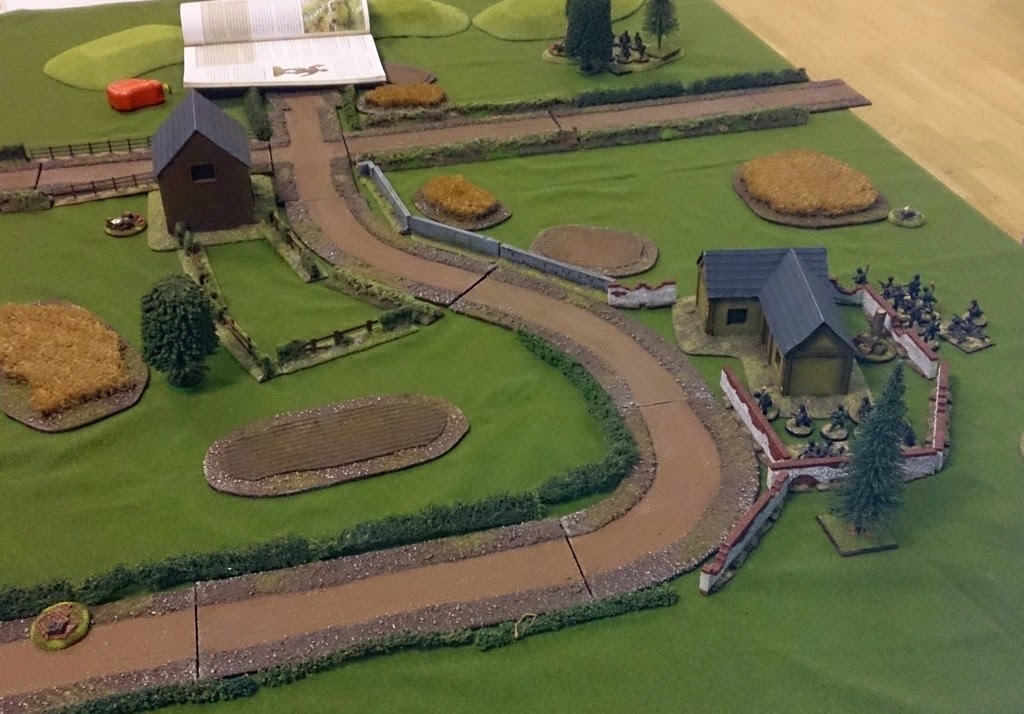 A slightly closer pic of the Germans deploying in the shelter of the small, walled building. 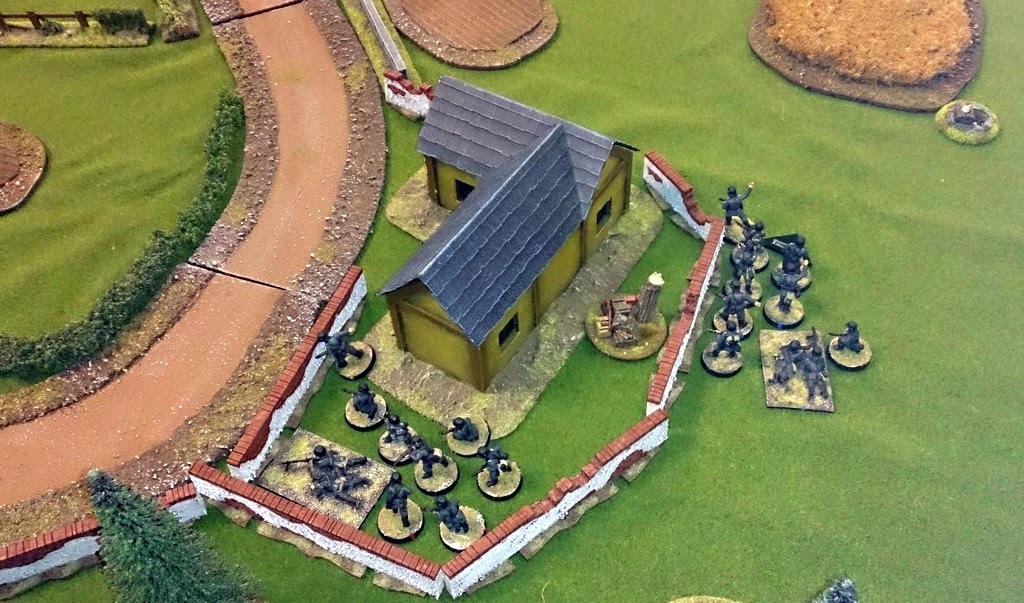 Here come the brave Tommies! Steve's chaps take up positions behind the fence and (out of shot on the right) in and behind the barn. 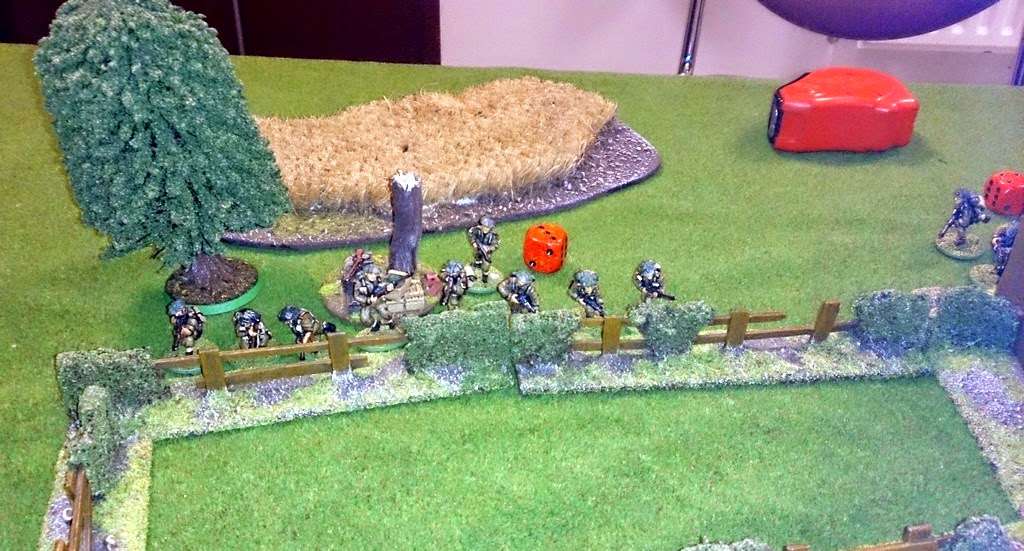 Steve guided me through the rules brilliantly - he's clearly both knowledgeable and very keen on this game. The rules give a dramatic ambience to the action and seem to flow really well.

The battle develops as more British arrive and the Germans press forward. On my right flank (out of shot) a section is hedge-hopping towards the barn but only taking very light casualties as much of the British fire is directed at the sections near the walled building. 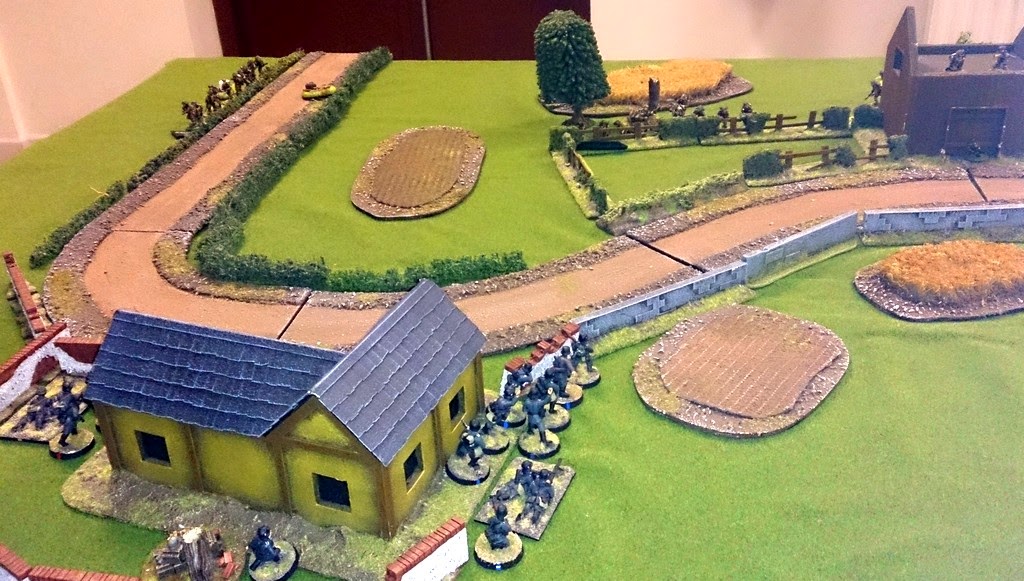 The left-most German section is being surpressed by covering fire on the walls so they break cover (amazingly taking only very light casualties!) in order to take the fight to the British. The other section follows the wall in order to bring as many guns in to close (or is it "effective"?) range as possible. That section's more robust cover gave them the edge over the British behind the fence near the barn.

The British 2-inch mortar shows startling precision to obscure the view of the MG42 team and thus give the chaps behind the fence some relief. 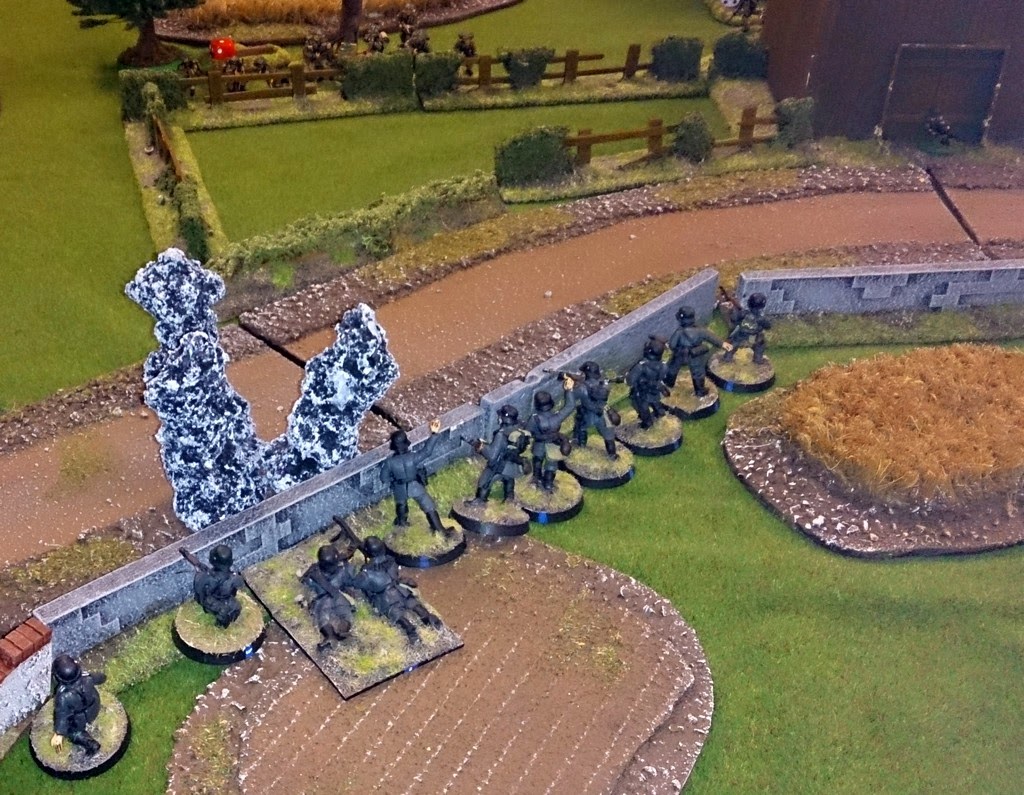 Here you can see a wider view of the battle. The British right flank (on the left in this pic) has taken a real beating mainly from the MG42 team on the road by the building. On the German right, the section is closing in on the barn where a British Bren team had taken up a commanding position. 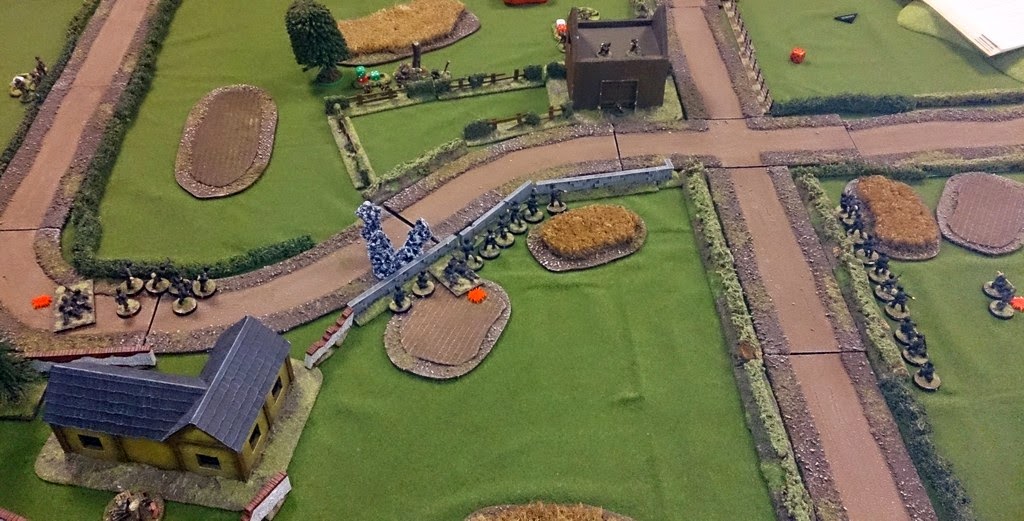 That's all the photos I took as I was having so much fun and was so engrossed in the action!! The British were coming under severe pressure and then their officers started getting killed or wounded which had a significant effect on their morale. With more British falling, shock points accumulating and morale dropping, the game finished as a solid win for the Germans. Beginner's luck methinks!

This was one of the most enjoyable, engrossing and dramatic games I've played - ever! Absolutely top notch fun, on a lovely table with a splendid opponent. Again, many thanks to you Steve.

Chain of Command is a superb set of rules and I have already ordered my own copy!