This is what I've been reading recently. 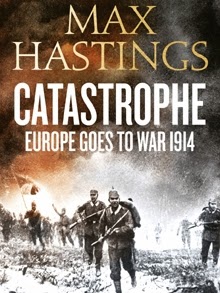 It's very good so I thought I'd tell you a little bit about it. Please bear in mind that my 'book reviewing' skills are a little rusty!!?

The earlier chapters focus mainly on the geo-political situation in Europe, who was 'friends' with whom, who would support whom in the event of aggression, etc, etc. I had thought that these might be a little dry (being a gamer I'm more interested in war-war, not jaw-jaw) but instead they set the scene very well indeed and shed some light on what must be considered a rather murky period of European statesmanship. What would help is a 'dramatis personae' so as to better keep track of all the key players!

The established view seems to lay most of the blame for the Great War on the Germans and/or the Austrians. This book does not overturn that view although it does redress the balance somewhat by illustrating the fact that other European powers all contributed to the escalation of events, either by direct involvement, deliberate sabre-rattling or sometimes simple inaction.

The next few chapters deal with the mobilisation of the armies on each side, along with the opening battles and sieges, such as Liege, Mons and Le Cateau. Hastings tries to put the British contribution at this stage in to the wider context of conflict between two large European land powers. He doesn't downplay the BEF efforts by any means, but he does make it clear that the BEF was tiny (just 3% of allied strength) in comparison to the mighty French and German armies. A fact that is often overlooked by the British.

The text also describes how, in the opening moves of the war, many of the leading military strategists and senior officers on all sides made some astonishing errors. These occurred through hubris, ineptitude or just sheer foolish optimism. It is perhaps easy to be critical with the benefit of hindsight but even taking that in to account some decisions are still beyond understanding. Many of these leaders had never been involved in a major conflict or had served in campaigns utterly unlike that unfolding in Europe. War was changing significantly and rapidly, and many combatants were struggling to adjust.

The book highlights two crucial factors that do not always get the consideration they warrant; namely transportation issues and communication with the front line.

Communication - or the lack of it - often played a key part. Detailed military plans are all well and good, but as armies advance and the conflict develops it was almost impossible for high command to keep a firm grip on their forces. The enormous strain of command weighed heavily on most leaders, pushing many of them well beyond their limits.

Later chapters deal with topics such as

Anyway, hopefully that's given you some insight into what I've found to be a superb book. Highly recommended!

Here are my final entries for the Painting Challenge. Another 18 Austro-Hungarian infantry which equates to 90 points so my total is now 514 points, just passing my target of 500 points. Hooray! 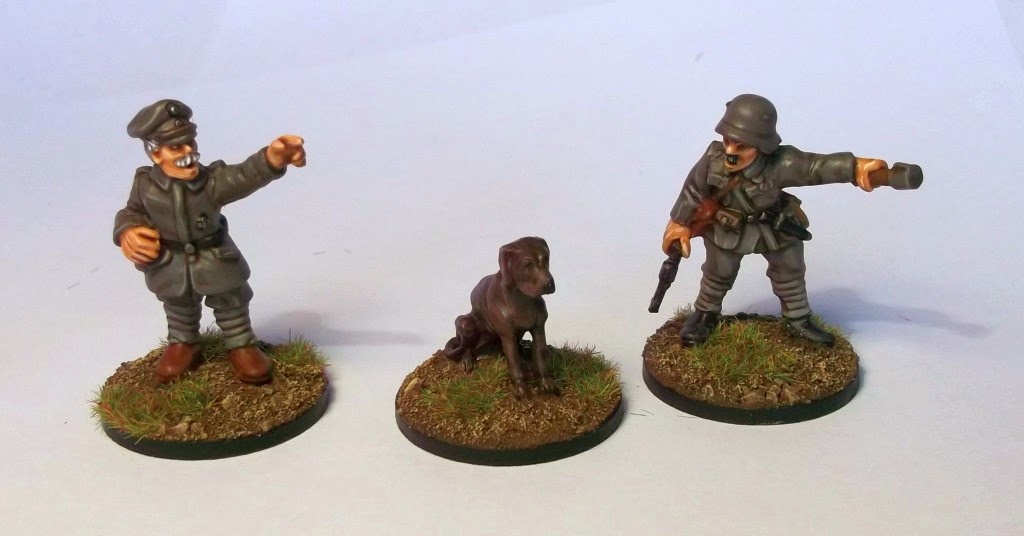 Officers waiting to signal the start of the "Big Push". 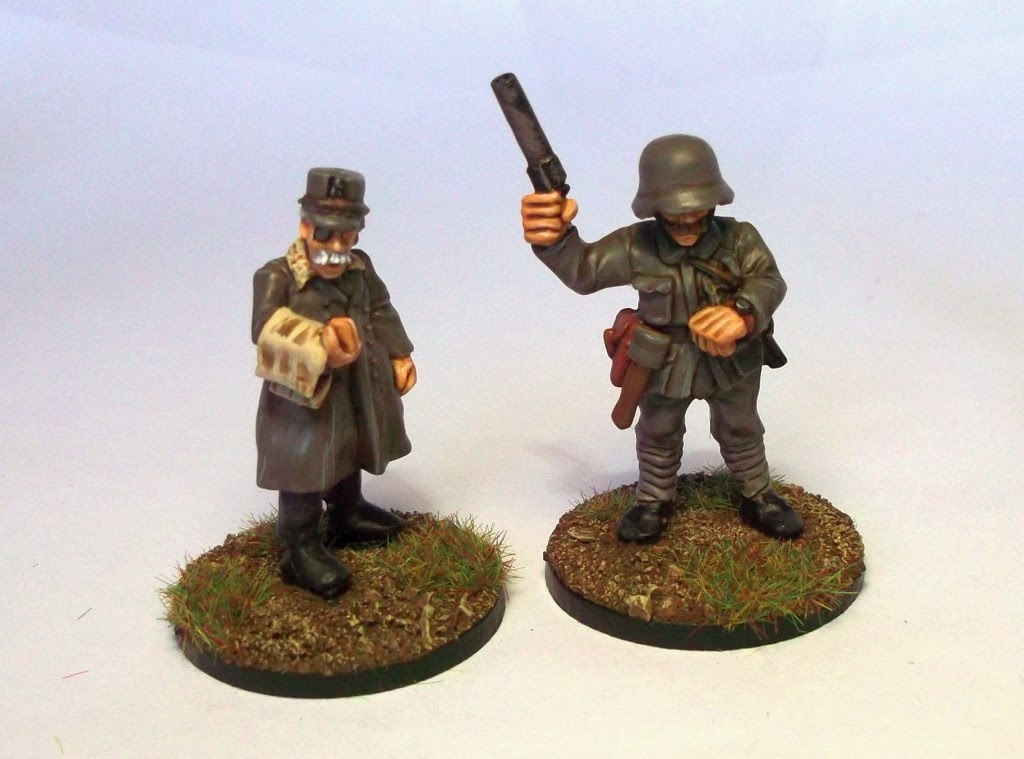 All Scarab figures apart from the two-man flamethrower which is Renegade.

More Austrians on the way!

With only a few days to go until the end of the painting challenge here are the 18 figures I need to complete in order to achieve my goal of 500 points. 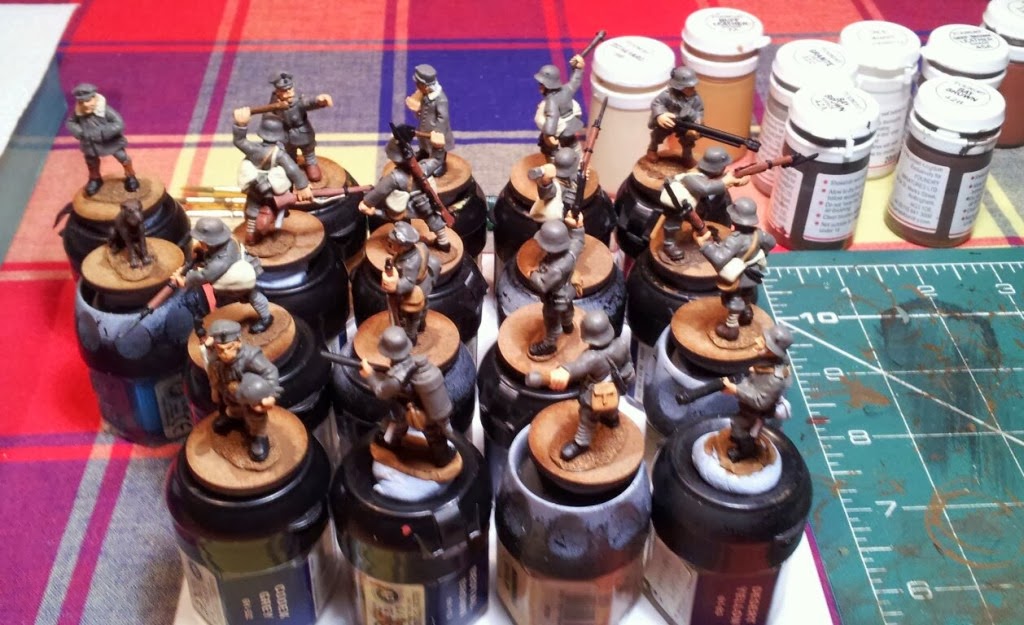 All block painted and ready for the wash. Any and all encouragement much appreciated!

A quick update for the Painting Challenge. Here's another six Austro-Hungarian infantry.

Plus a couple more casualty figures 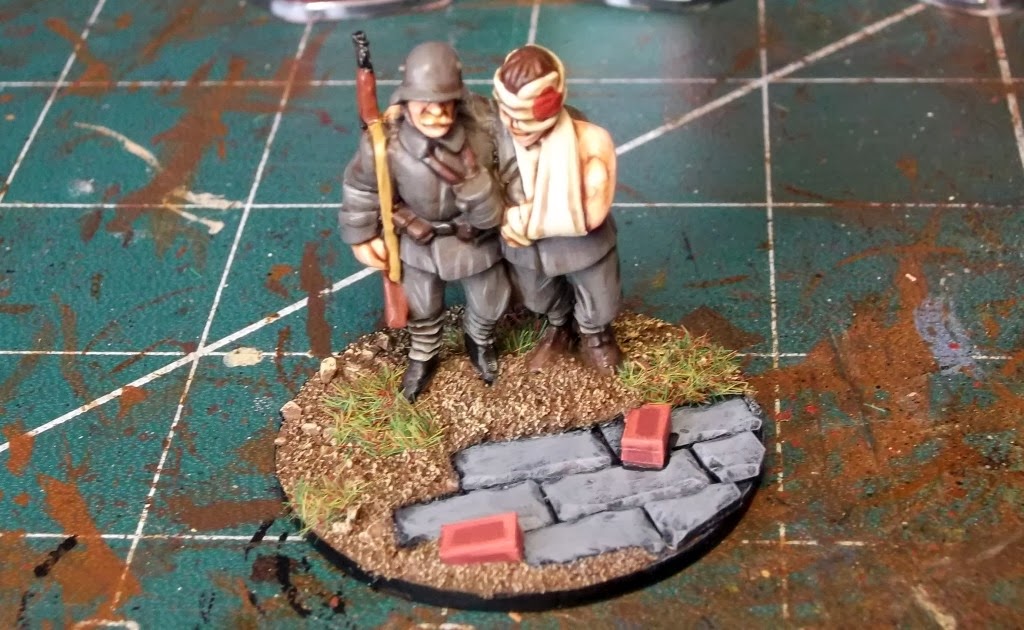 Have reached 424pts but I'll need to get a move on to reach my target of 500pts before the end of the challenge.

What is War & Conquest?

War & Conquest has been out for some time now (over 2 years!) and has become rather well thought of .. and rightly so! I've talked to lots of people at shows about the game and a number of people have asked questions along the lines of "Is it WAB v3?", or "It's just WAB with a few tweaks isn't it?". The answer is no, not really, it's far better! So to help elaborate on this I thought I'd jot a few notes on what makes War & Conquest different from WAB and other rule sets by highlighting some of the key concepts of the game. 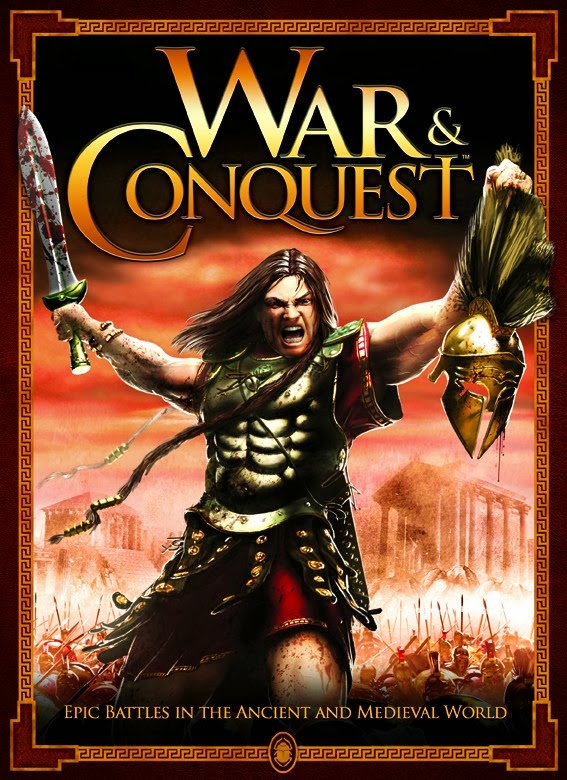 Strategy Points
Each force will have a number of Strategy Intervention Points (or 'SIPs') and they reflect the commanding personalities ability to directly control or influence the course of the battle, either by helping to gain 'Strategic Advantage' (see later) or boosting the chance of successfully making Morale tests.
This effectively provides enhanced leadership, but the results are not guaranteed, and the points are a limited resource.

Strategic Advantage
At the start of each 'game turn' (consisting of Player A's turn, followed by Player B's turn) you roll to determine who has this advantage. This represents the natural ebb and flow of battle and affords the winner of the roll the potential advantage in the forthcoming game turn by allowing them to go first – or second if that's more useful.

The Turn Sequence
It is basically 'I-GO-U-GO' but the 'I' and 'U' have the potential to swap as outlined above, i.e. an example turn sequence might be Player A Turn 1, Player B turn 1, then after determining who has "Strategic Advantage", Player B turn 2 followed by Player A turn 2. This adds some uncertainty and thus drama and tension, plus it positively encourages players to think ahead.

Movement
Like many rule sets, all troops have a fixed basic movement allowance. However, this becomes slightly less predictable when terrain comes in to play.
When it comes to movement for fleeing and pursuing troops, a simple but effective mechanism comes in to play. Three D6 are rolled and depending upon the type of troop, or possibly their formation, then they choose either the two lowest, the lowest and highest, or the two highest to determine the total distance moved.

Shooting
This is very straightforward, and to be fair, quite similar to a number of other rule sets. Roll a D6 per figure shooting, the target rolls to see if it's armour will protect it, then any penetrating hits are rolled to see if they cause wounds. Simple and effective.

Combat
Hand-to-hand combats in War & Conquest are where battles are usually decided – hardly surprising for an Ancient & Medieval war game!? In the first round of combat only the front ranks fight and some weapons give a bonus at this point, e.g. the Roman Pila punching through enemy armour. In subsequent turns the second rank (and possibly more depending upon weapons/formations) also joins the fray. This means rolling lots of dice, which I like, plus it helps to even out the more extreme dice results.
If your troops win but the enemy passes its Morale test and holds the line – which occurs quite often – then you gain a "Push & Shove" bonus to count towards the combat in the next turn. This means that you can continue to build the 'pressure' on the enemy line even if they do not rout.
The rules encourage wider formations which gives a very pleasing 'battle line' effect on the table. This, IMHO, is also more 'historical'. Oh and one final tip - don't get flanked!

Skirmishers
Few ancient battlefields would be complete without some skirmishing troops. In War & Conquest these troops are very manoeuvrable (especially if mounted!) but for the most part not particularly fearsome. Annoying for formed up enemy, but rather fragile, as they should be. This in turn tends to lead to skirmisher warfare between the lines.
The rule for Glancing Attacks is an ingenious way of allowing skirmishers to potentially join in combat with formed troops but retaining a sense of balance and also avoiding a swath of complex rules. It nicely represents skirmishers darting in close, hurling a few javelins or stones and dashing away before they get bogged down. The essence of skirmishing really.

Command & Morale
All troops have a Morale value which can be boosted by nearby Personalities. This is the score used to determine how well they respond to commands or how firm their resolve is in the face of the enemy. Tests are usually required to perform more complex manoeuvres (particularly if the enemy are near!) or to hold the line in combat. When a test is required, most formations will roll 3D6 and choose the two lowest (with a total equal to or lower than their Morale being a success).
But as the battle develops and formations take casualties, this can drop to just 2D6, making them less resilient.

Personalities
The main role of characters (or Chieftains, Lords, etc) in War & Conquest is to provide enhanced Command & Morale, especially in the form of the SIPs mentioned earlier. Personalities are not the combat monsters that you can find in other systems, however they do usually provide a small martial boost to the unit they accompany.

Battle Objectives
The game includes the concept of a selection objectives for each side. This prevents every battle from simply being a pitched battle. Before deployment each player secretly determines his objective - such as taking and holding part of the battlefield, raiding the enemy baggage, etc. These can make for very entertaining play as you try to figure what your opponent's objective is (and therefore how to stop him/her) whilst at the same time trying to achieve your own.
It's also worth noting that these objectives have been very successfully used within the context of historical battles in order to give a little more variety, i.e, 'what ifs' rather than just being a simple re-fight.

New Players
At each of the gaming day events we've had new players join in the fun. The fact that they generally seem to pick up the rules quickly and have enjoyable battles speaks volumes for the game.

Errata
What? Unlike some other rule sets War & Conquest has no errata. Inevitably some people require clarification or have genuine queries; Rob deals with these (normally via the forum) promptly, often needing only to give a page reference and/or a brief explanation.

The Book
The War & Conquest rulebook has to be one the best looking books on the market!! The beautiful layout, the excellent diagrams and a marvellous selection of photos of gorgeous miniatures make for very enjoyable and inspirational browsing.

If you read this far then (a) thank you, and (b) why not head on over to the Scarab website here and order yourself a copy?

Here's my next 'bonus round' entry. A few characters from two rather different points in history.

First, in chronological order I suppose, is Brasidas, a very warlike Spartan officer standing over a fallen enemy. You may also note that he's the figure from the front cover of the War & Conquest rulebook. 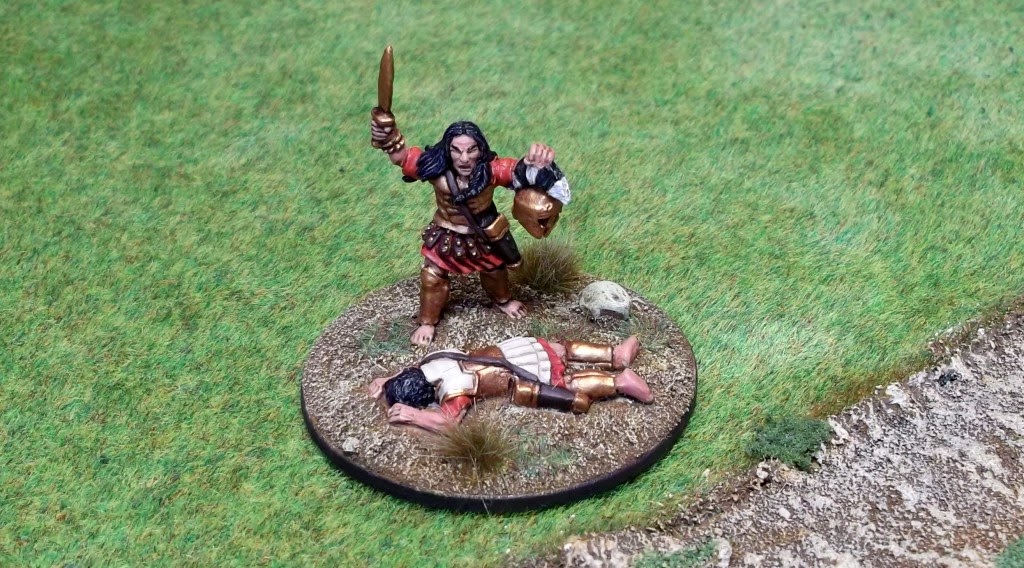 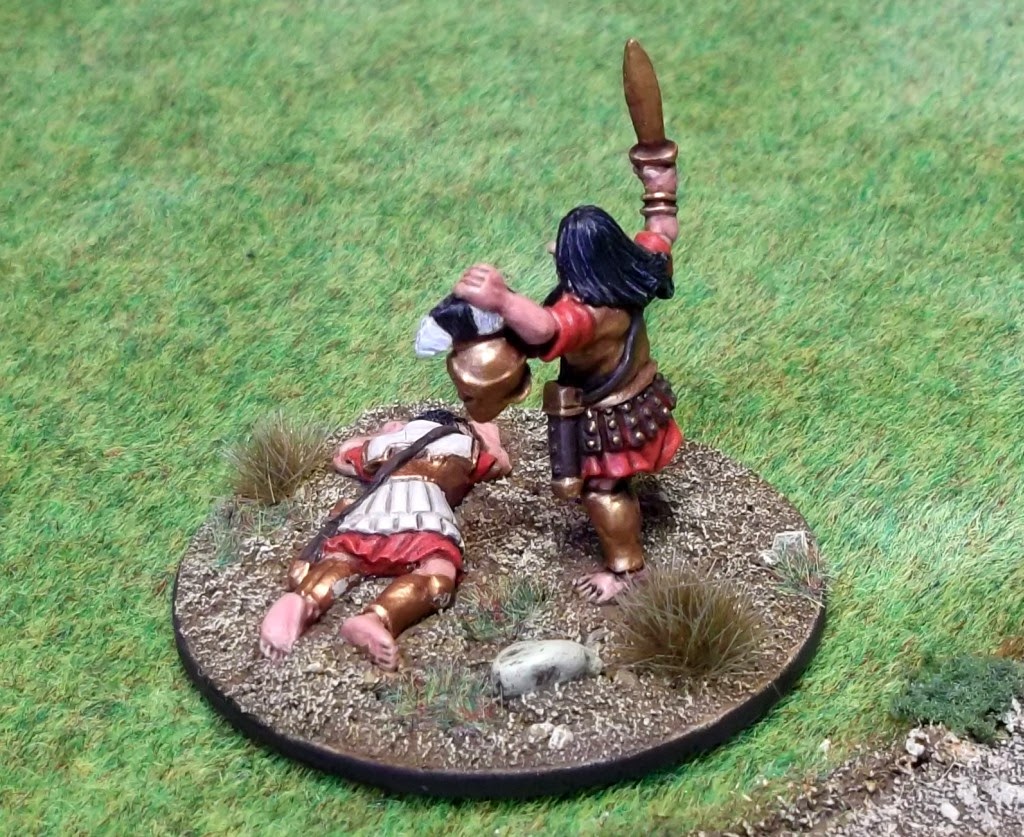 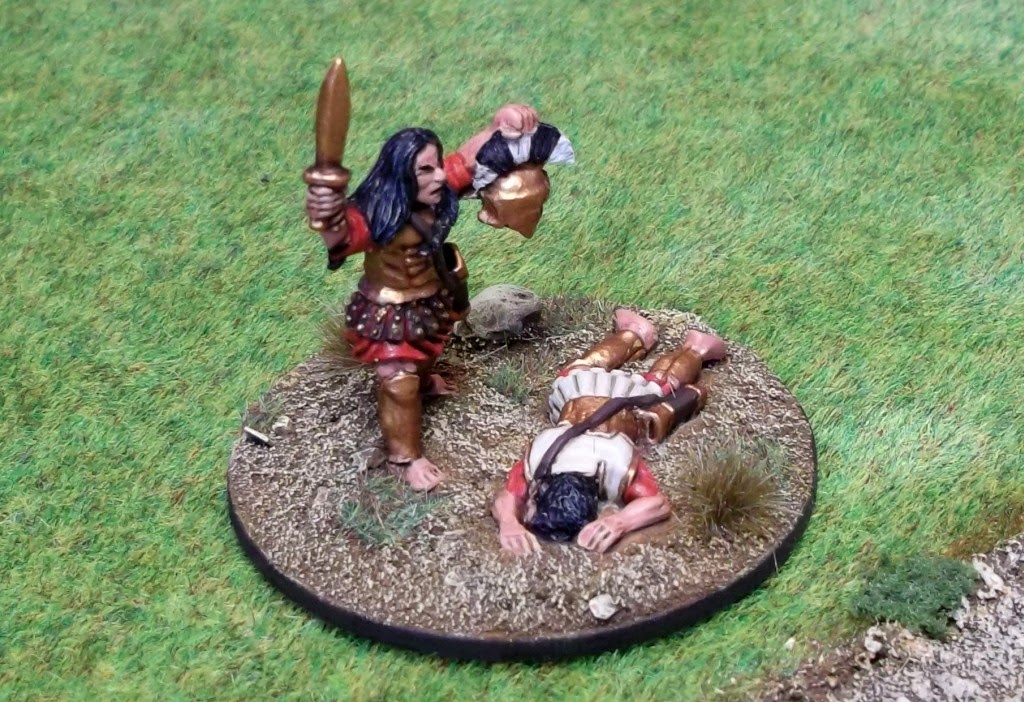 Second, moving forward approx 23 centuries, we have none other than the Red Baron! 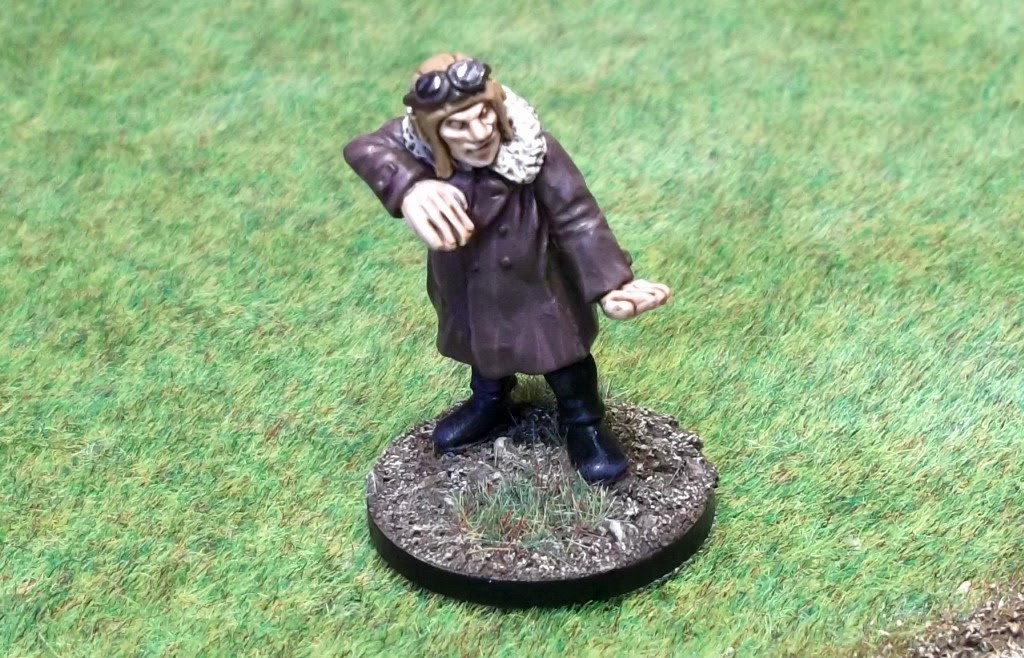 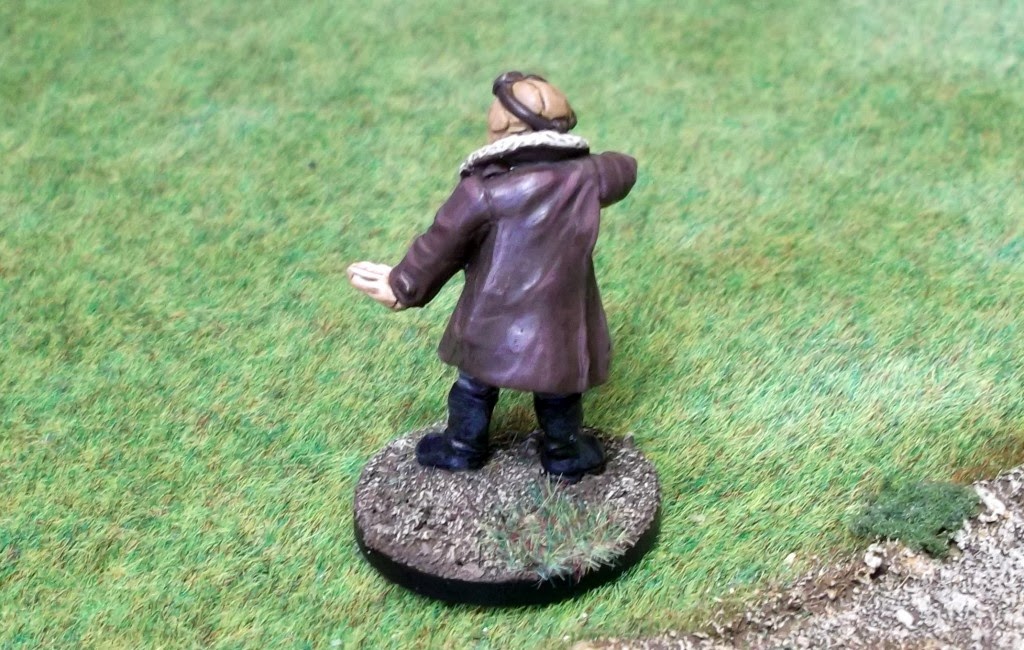 Third, is Ernest Hemingway - or rather a figure inspired by the man. (This one is actually painted up in A/H colours ... but shh!) 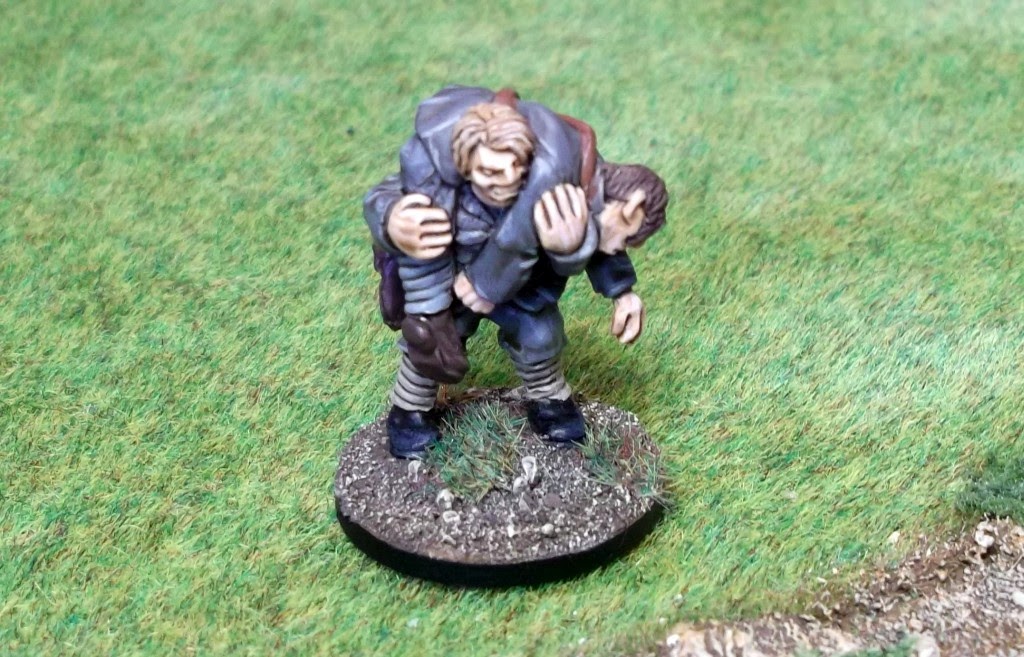 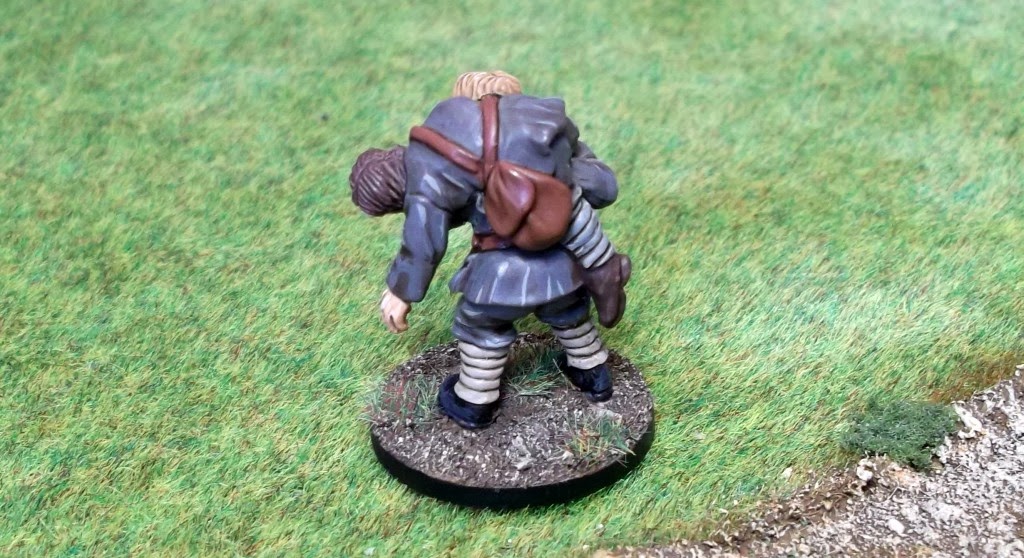 Finally, here's Erwin Rommel who served in the Great War on the Italian front with A/H Alpine Troops. 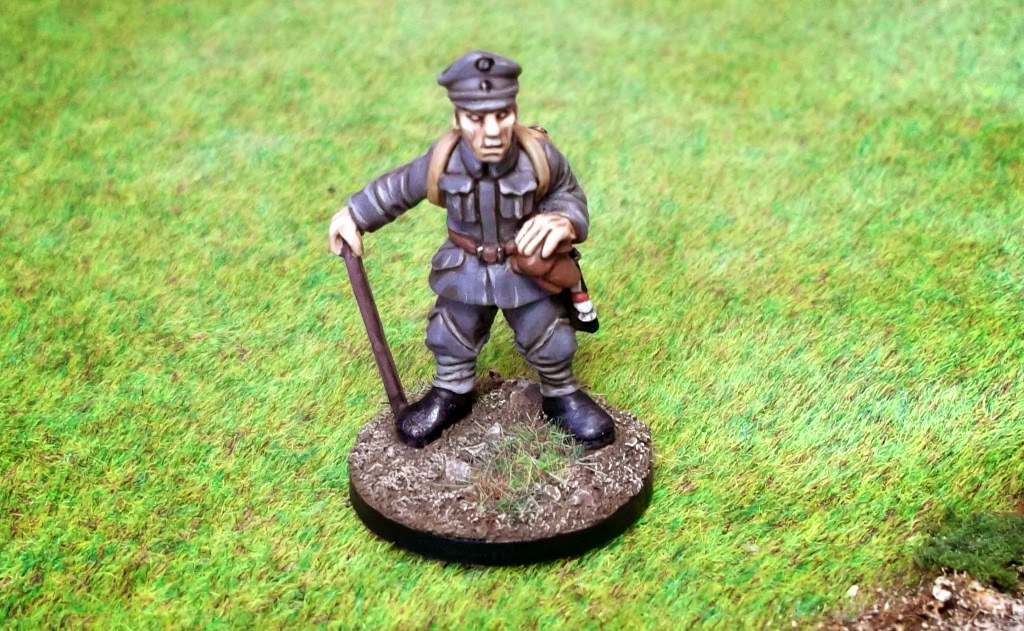 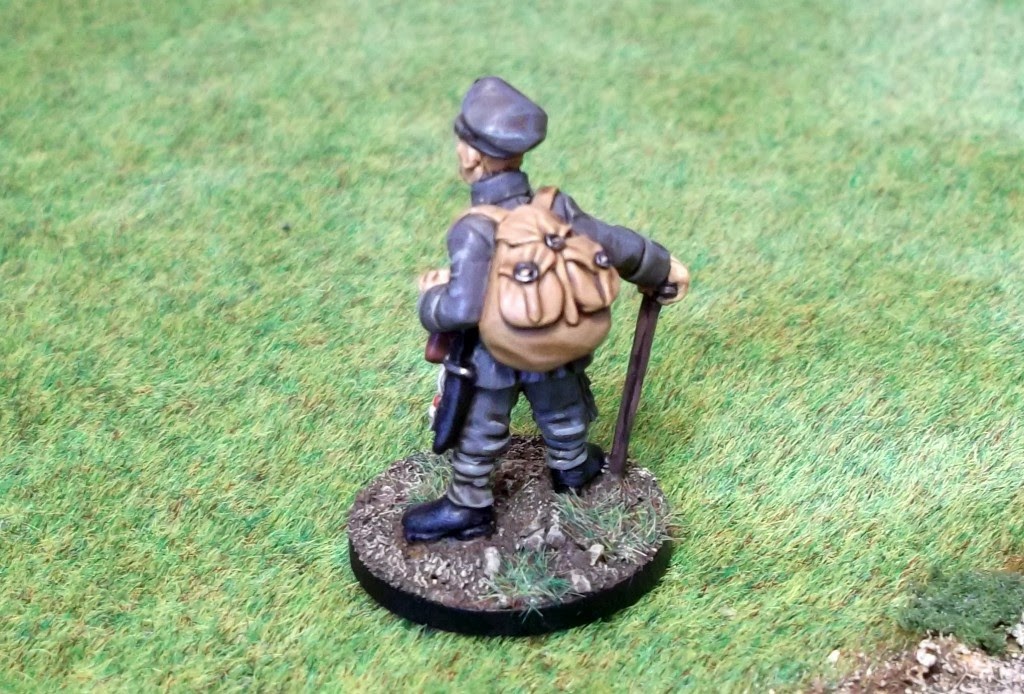 All these beautiful figures are available here from Scarab Miniatures.