To celebrate the occasion of his birthday, chum Steve (along with Simon) arranged a huge game of Black Powder - no less than the Battle of Waterloo! 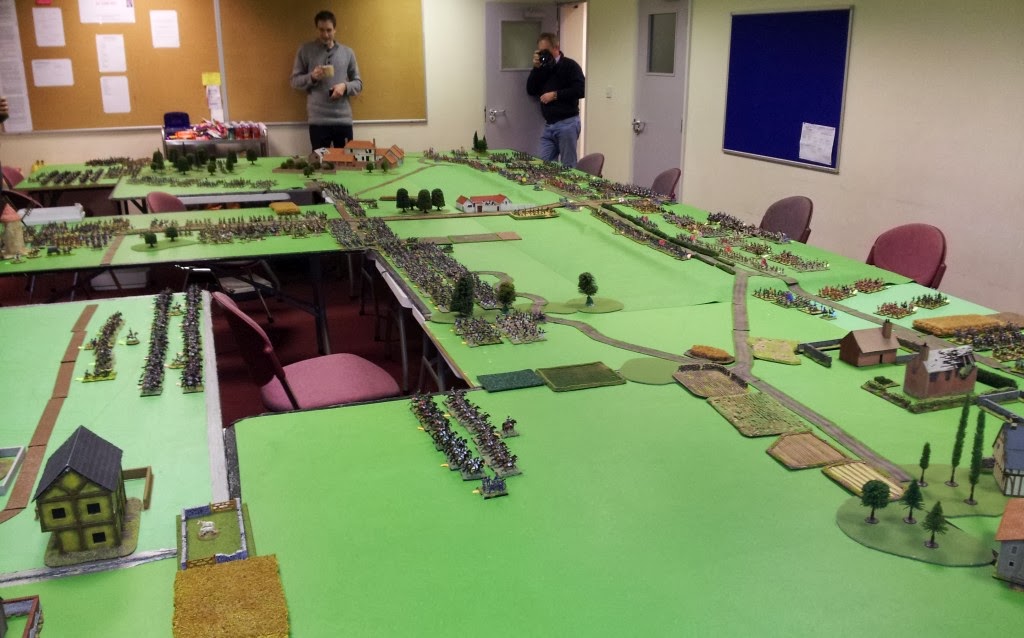 This would be my first game of Black Powder ... and wow what a game! Each side had 5-6 players so commands were allocated by a lottery. I drew General D'Erlon, so the 5 divisions of the mighty 1st Corps (42 battalions of infantry, 8 batteries of guns and 4 regiments of cavalry!) were under my command. 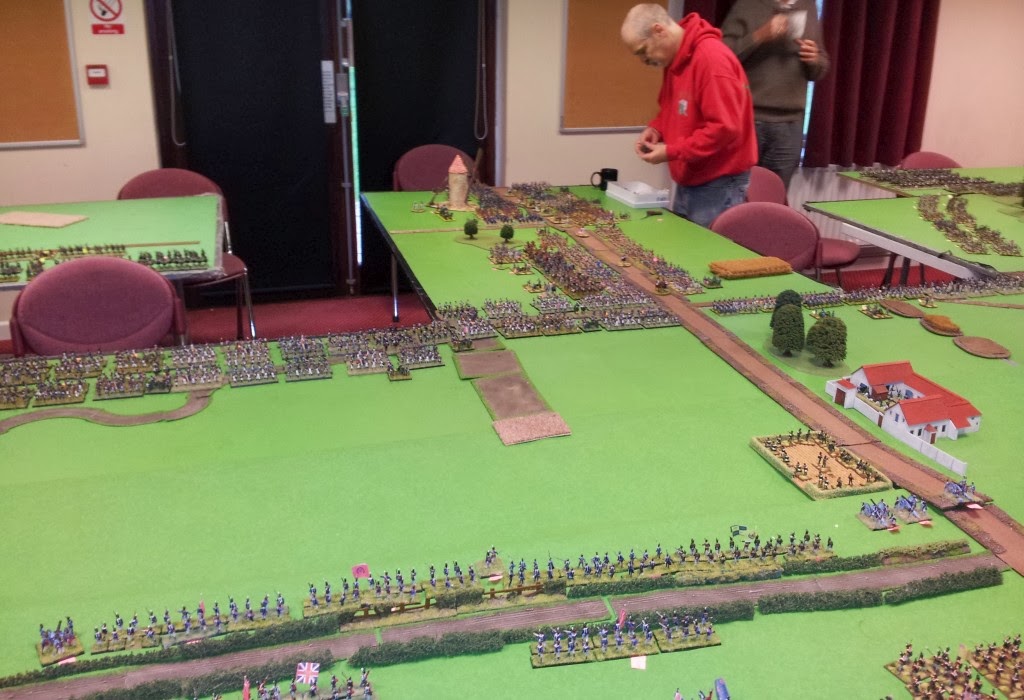 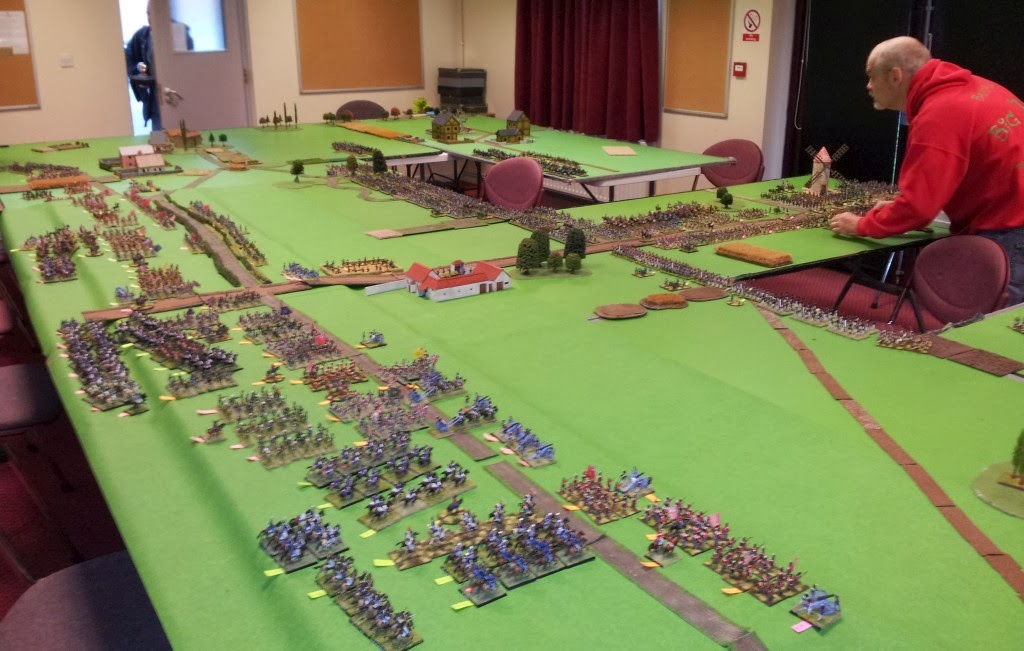 A view, from the Allied ridge of La Haye Saint and the 95th Rifles in the sand-pit. Hello Sharpe! In the background you can see my 1st Corps, starting at the road and extending east across to the far right French flank. 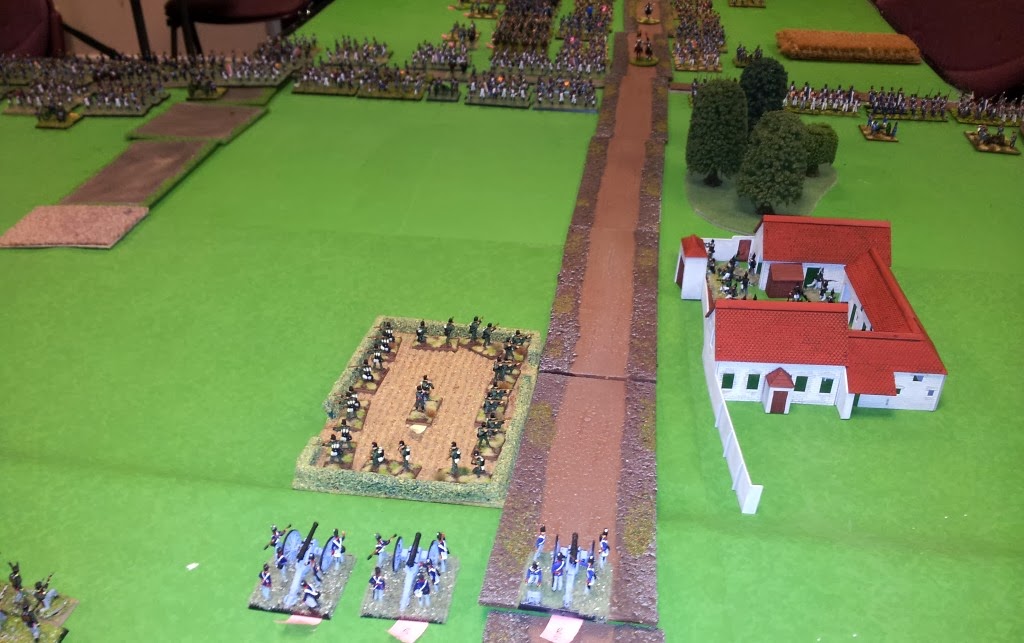 A view along the Allied lines. The little chits of paper behind the units were essential notes of what division/brigade each unit belonged to. 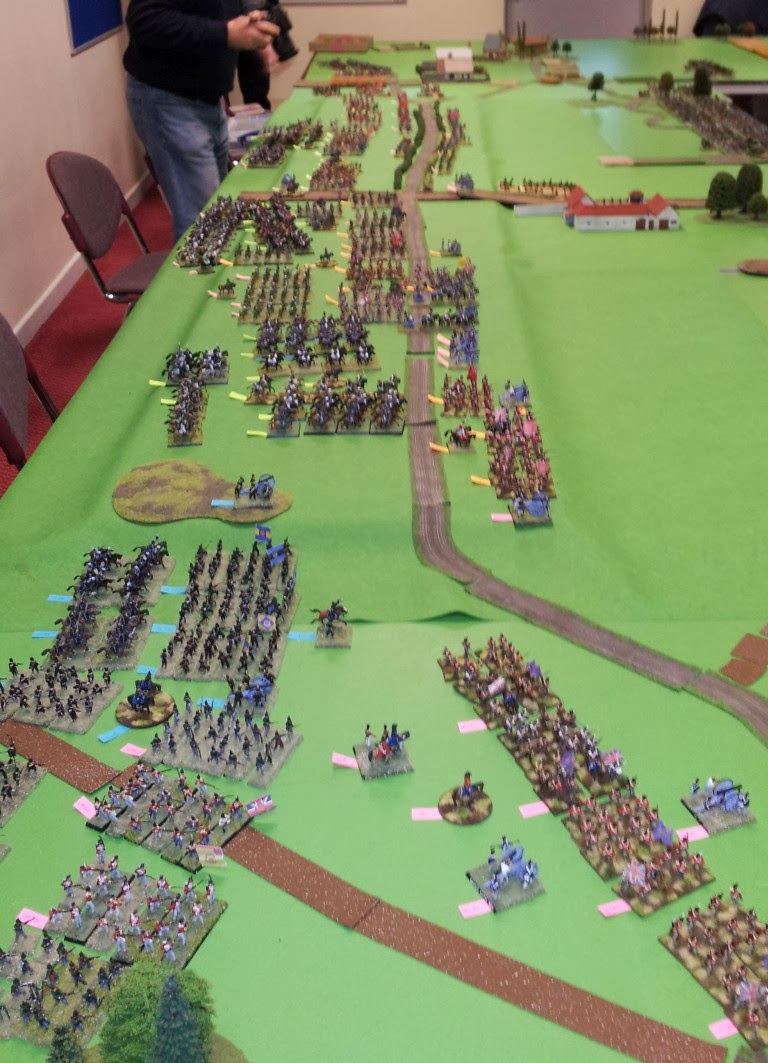 The ridge opposite the centre of 1st Corps with the Belgian 'militia' standing in clear view.

A view West along the Allied line. Hugoumount is just out of shot to the left.

Simon busily finishes off the army lists and rosters. A big "Well Done" for organising and running things so smoothly on the day!

1st Corps begin the attack ... sort of!? One division launches a ferocious attack on La Haye Saint and the Rifles, but second division (commanded personally by D'Erlon!) blunder off to their left. The third and fourth divisions advance on the ridge and are hammered by artillery then musket fire. 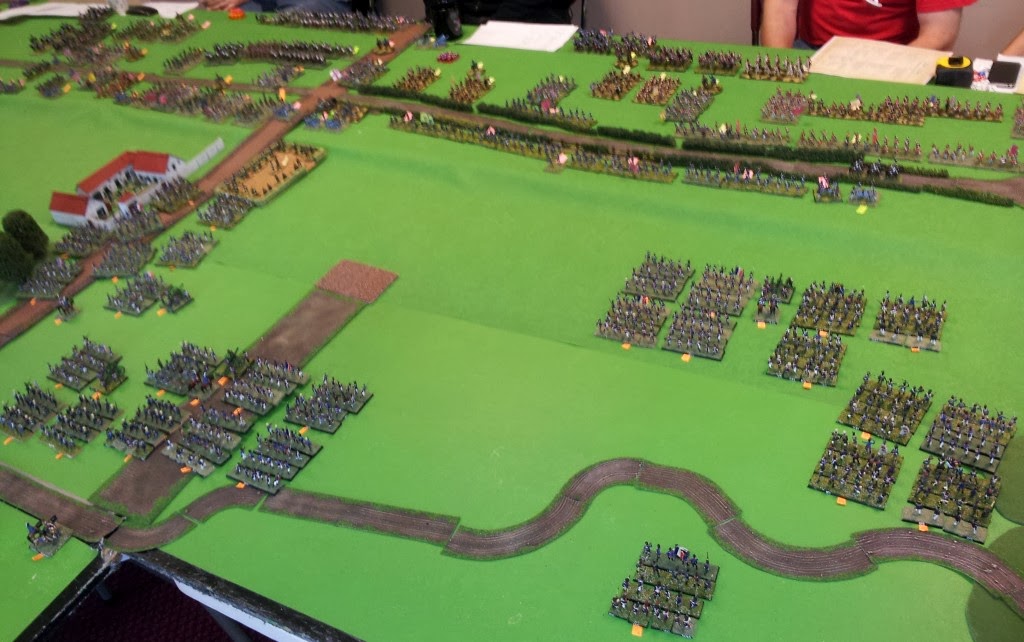 We wanted to press the attack as quickly as possible because Simon was keeping us in the dark about when then Prussians would arrive on our left flank. In the meantime Alan and Mike began to move some of the reserves and Guards across our rear to try to occupy Plancenoit before the Prussians.

Here's Steve (Picton) removing the 95th Rifles after they were crushed in a lightning attack by the French. However, the brave defenders of La Haye Saint, commanded by Rob Broom (a.k.a. "Silly Billy" - HRH The Prince of Orange) held out ... but only just! 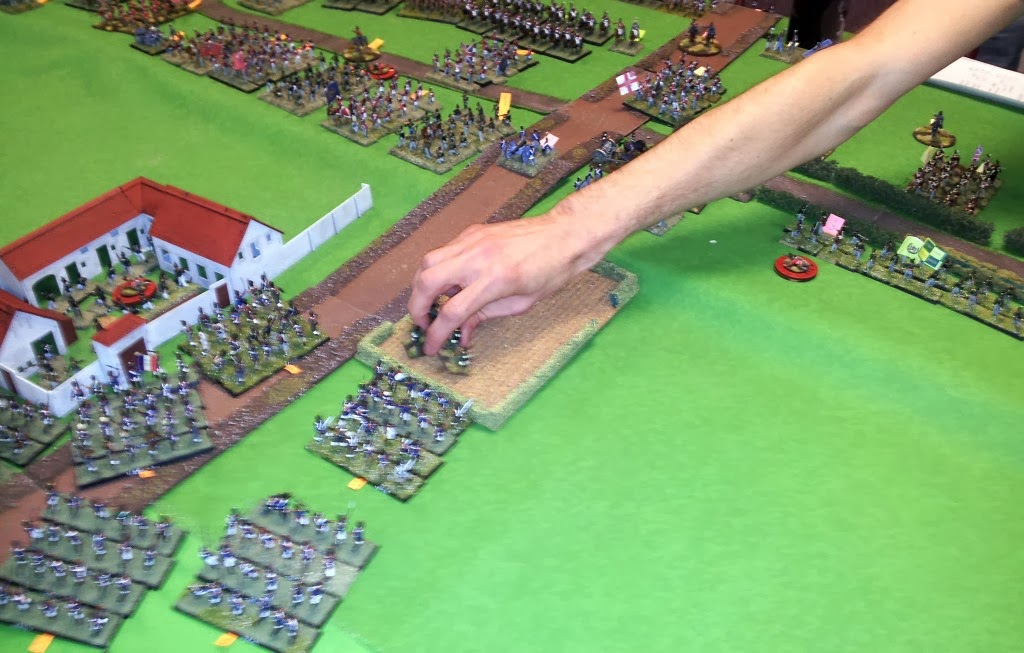 Later, the battle for the farm continues (troops in buildings are very difficult to dislodge in BP) whilst D'Erlon finally manages to get his second division heading for the ridge. 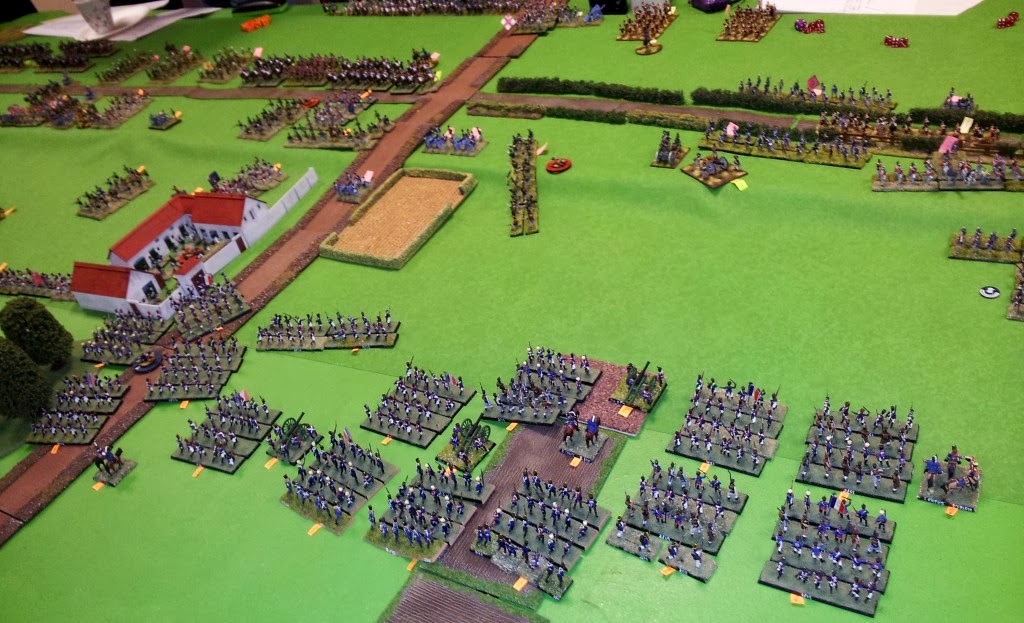 The Duke of Wellington (Ken) has a light sabre moment with a tape measure!? 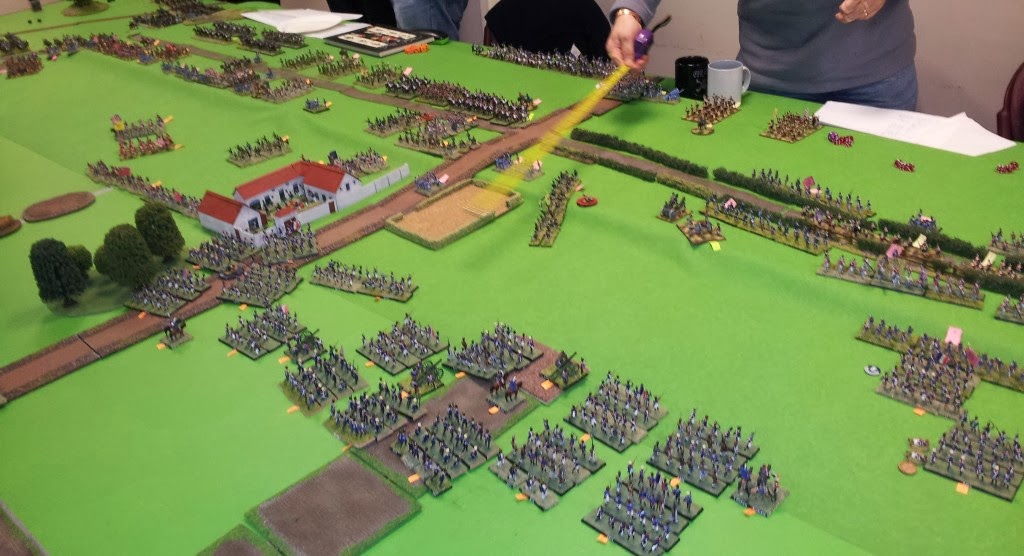 The rest of D'Erlon's infantry push on towards the ridge, all the while keeping an eye on the left flank for any sign of the Prussians. 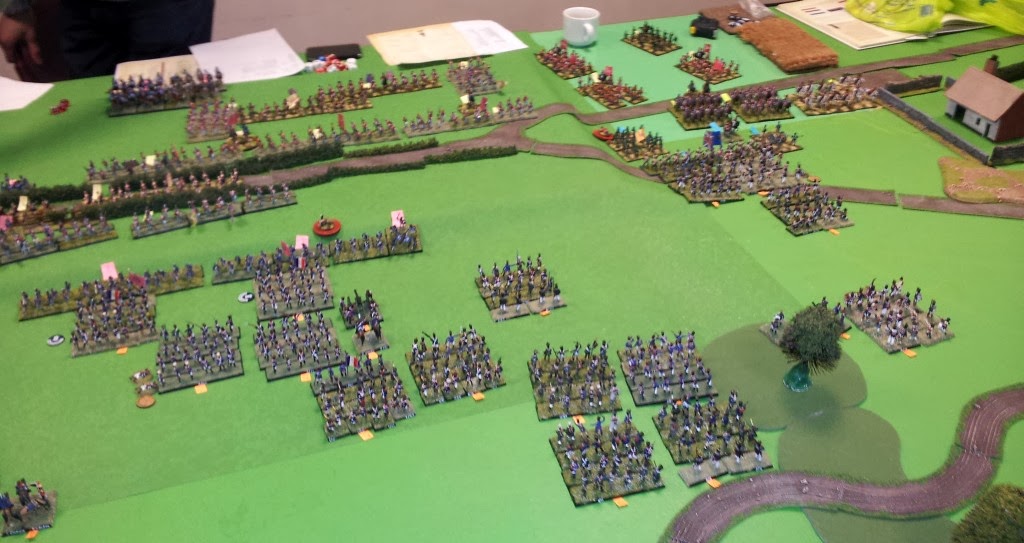 Simon keeps an eagle eye on proceedings around Hugoumount. Just as in the real battle, our commanders launched a series of attacks and counter attacks to capture the chateau. 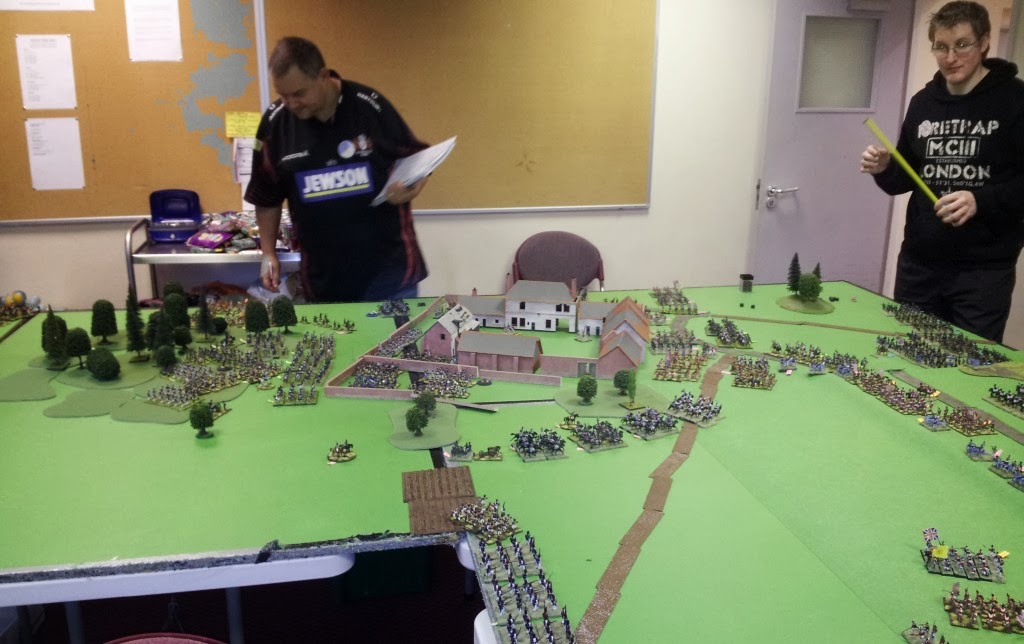 The French left flank (Plancenoit is just out of shot to the right). D'Erlons cavalry divison (lancers and hussars) face some British/Belgian hussars, whilst to their right a divison of  Ney's (Phil) Cuirassiers slaughter the rest of the Allied light cavalry.

The attack around La Haye Saint and Wellington's centre continues. 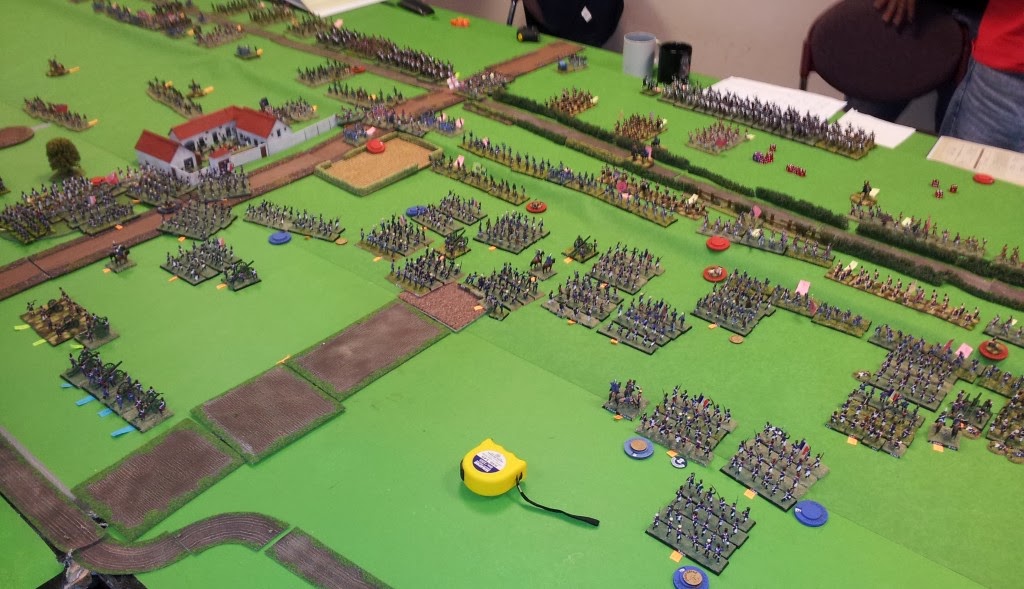 More of 1st corps try to dislodge the stubborn Dutch and British infantry. 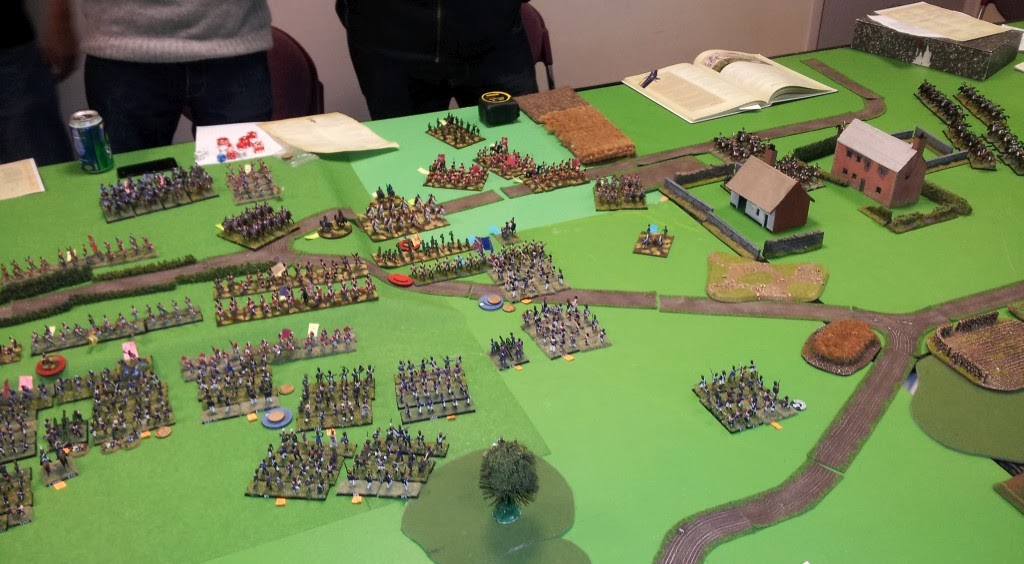 Success! Several Allied battalions are defeated and routed, but wait - is that Allied cavalry being brought forward to help plug the gap? 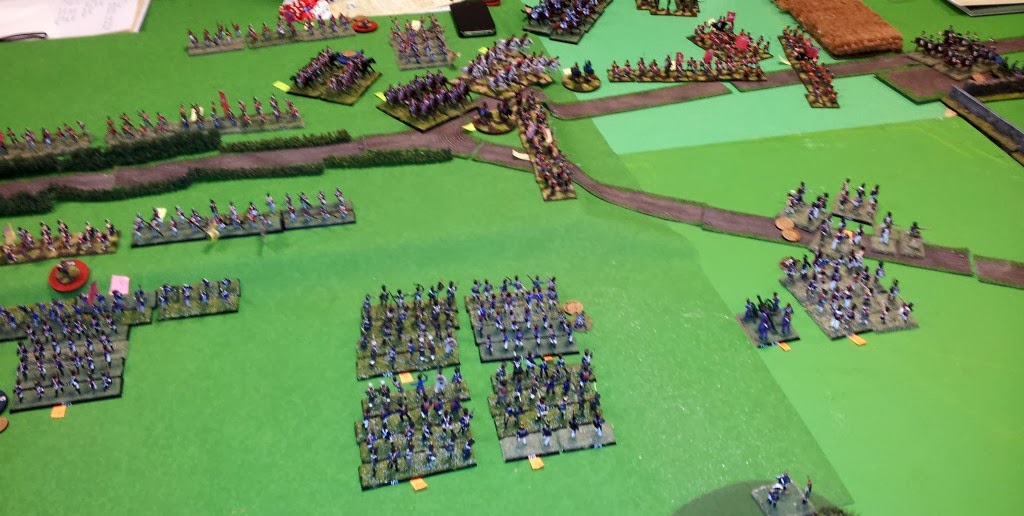 D'Erlon and his divisions about to take the ridge. 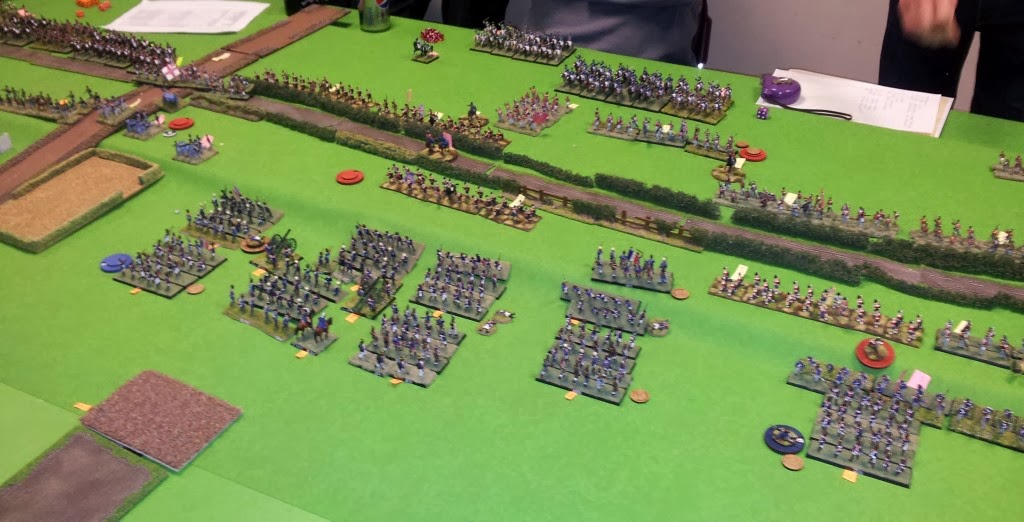 What's this? The Prussian have arrived. Alan and Mike have pushed the Guard cavalry out to screen the village whilst the reserves and Guards make haste to capture the buildings and halt the Prussian advance. 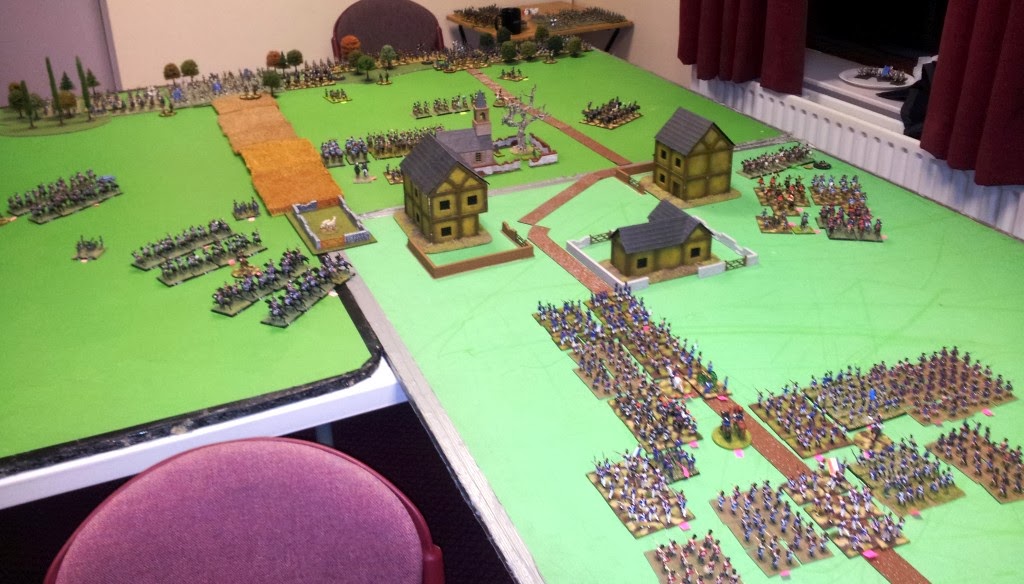 'Ware cavalry!! The french form square to avoid the cavalry but in doing so present ideal targets for the Allied muskets and cannons. 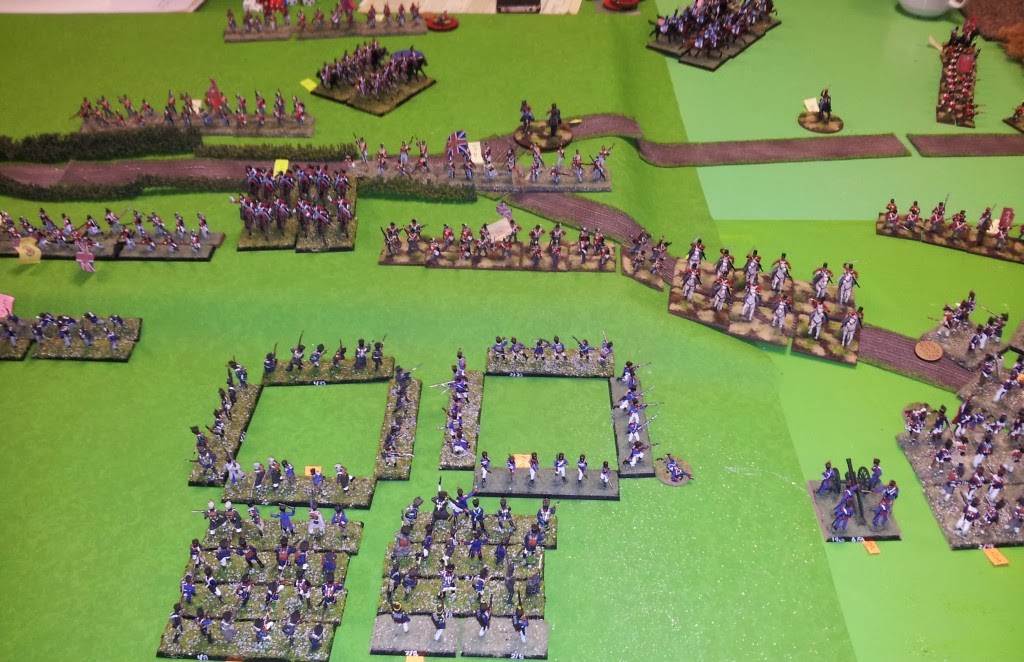 Ooops! These chaps don't make it in to square in time. Things look bad for D'Erlon's 2nd infantry division.... 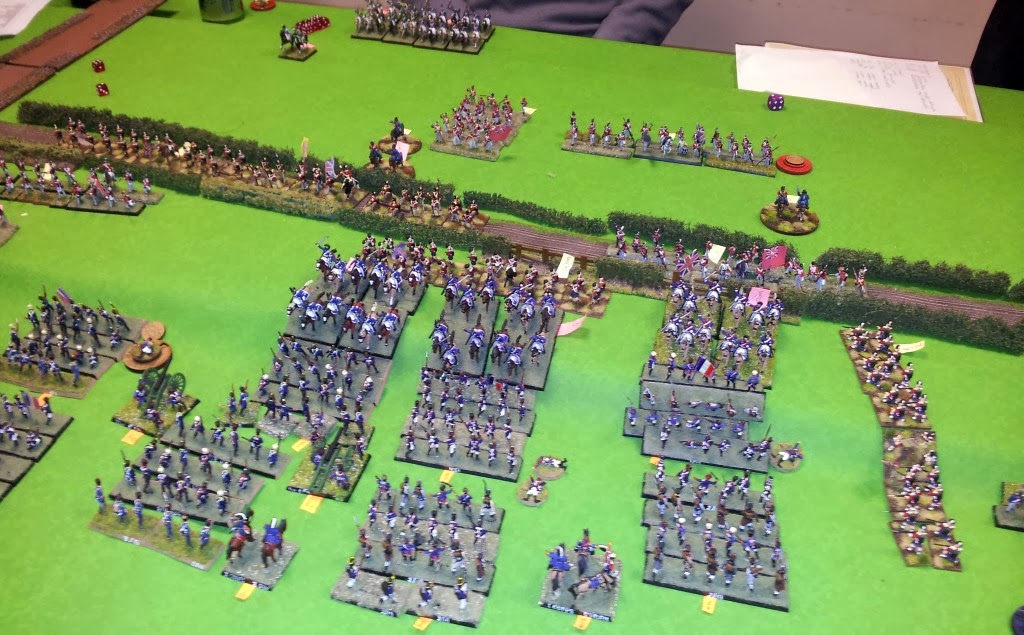 ....but wait! Simon's timely intervention helps us to avoid a dreadful rules blunder. The French can (and do) form square. However, with 1st Corps having taken the battle to the Allies all day they had suffered huge casualties and were starting to look a little fragile. 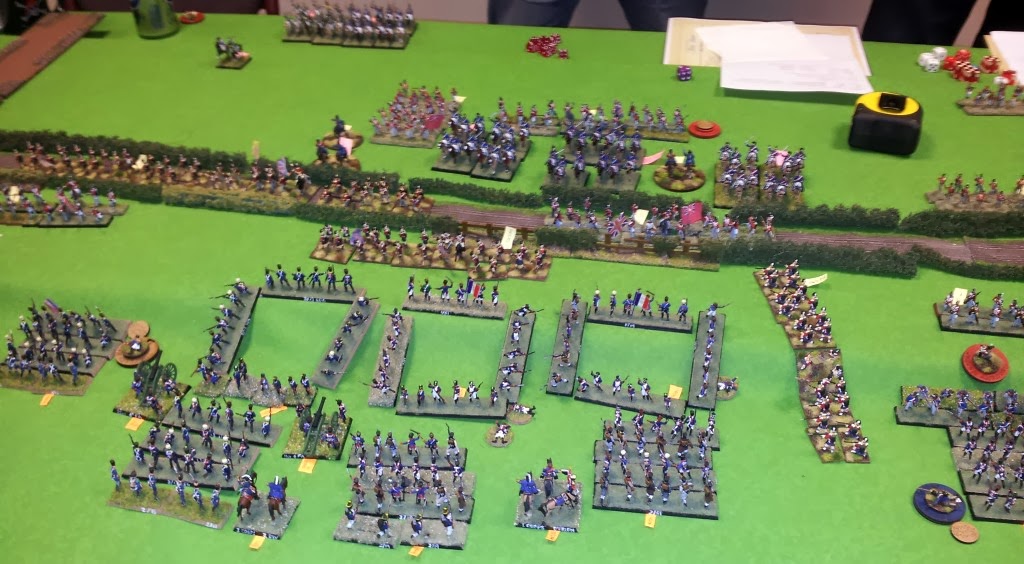 Back in the centre the guard maintain the advance, whilst on the flank the battle continues to rage as the guards hold on to Hugoumount. 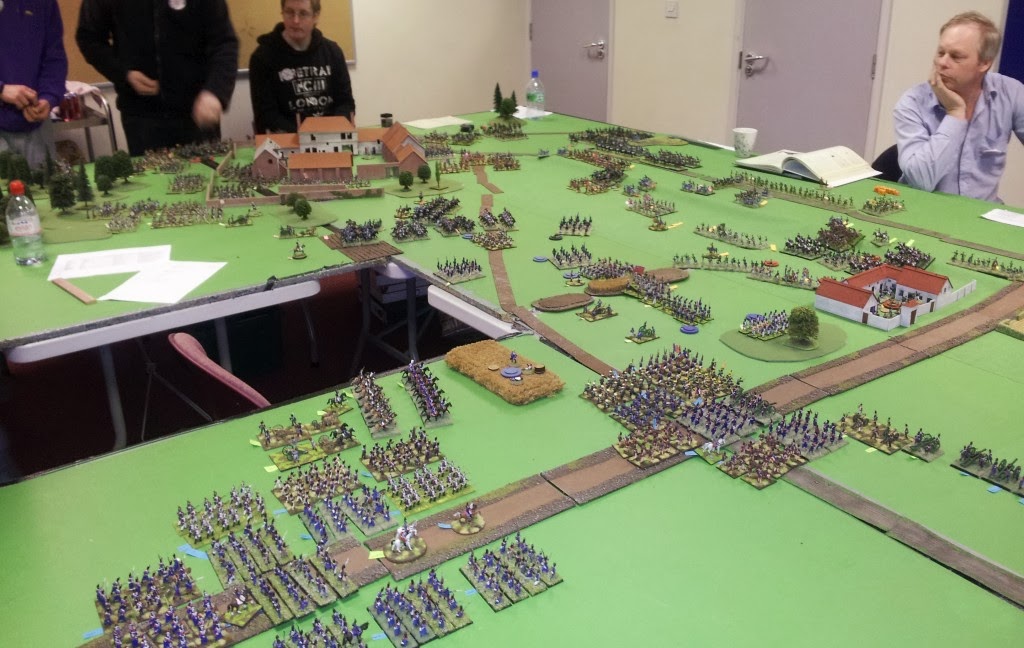 At about 6pm I had to depart. The French Guard were making an attack on La Haye Saint and massing to assault the ridge. The rest of the Guards and Ney's cavalry were holding the Prussians in check, so it looked like the French could pull off a close victory!? Vive L'Emperor! (...and they did indeed prove victorious!)

Many thanks to Steve for inviting me along, and many thanks too to my very sporting opponents (mainly Steve and Ken on the ridge) and also to my fellow French generals! A special mention must also be made for Steve's wife Tracy for providing a super lunch :o)

All in all, a superb and extraordinary day of gaming.

A unexpected day off has given me the opportunity to complete my Austro-Hungarian Romfell armoured car! Here it is, along with some troops giving directions and cheering.

This is also my entry for the third bonus round of the Painting Challenge which has a theme of vehicles; so that's 15 points for the vehicle itself and an extra 50 points for the bonus! I've really enjoyed painting this and plan to add another with a commander peering out of the hatch. Scarab have an excellent A/H officer with binoculars in one of the HMG packs that would be ideal.

The painting recipe was:- 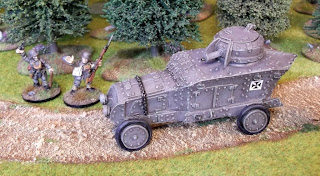 I must credit my lovely wife for the idea of the cross insignia. I had tried to paint some on a scrap of card but they always looked lop-sided or just plain rubbish. So she suggested printing somthing suitable in best quality on very thin paper. The Wingdings font has a suitable cross. Carefully trimmed, glued and covered with some matt artists varnish it does the job perfectly.

After a great start to the Painting Challenge things here at the Wargames Table rather ground to a halt due to the so-called 'holidays'. Anyway, starting to get back in to the swing of things and - more importantly - starting to get the brushes going again!

Here's a few work in progress shots of stuff currently on the painting table. As you can see, it all has a very 'Great War' theme.

This is the 1st Corps Romfell kit. Great model, good quality and easy to build. As I type it's now sitting on the desk undercoated and ready to go! 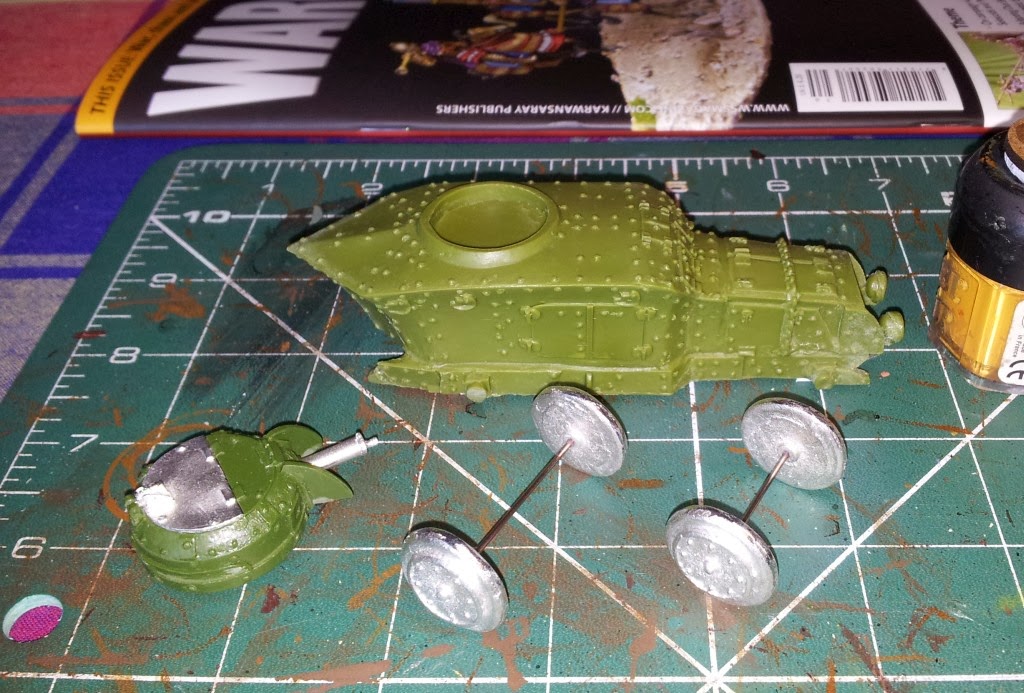 By the way ... if you want to see a truly spiffing example of a fully painted (different) vehicle then check out Sidney's recent post on his blog about Mata Hari ... Stunning ... I was totally lost for words!!!

The rest of my first A/H Stormtrooper platoon. Note the fearsome flame-thrower! 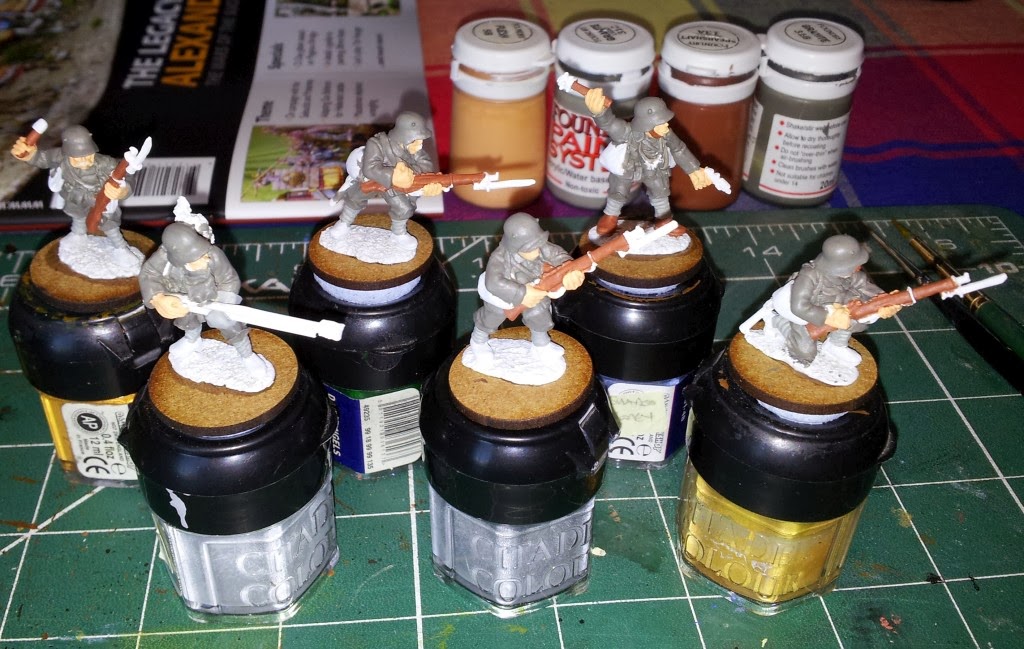 Right! Must get on.

Here are Thorin and Company from GW's Escape from Goblin Town boxed set. They were supposed to a be Christmas present for my small people, however they were slightly delayed on the painting table! Fortunately we have a tradition in our family of a second round of gift giving either on New Year's Eve or New Year's Day. So guess ... what? These made it in to the second round!! (Almost) 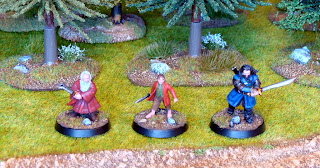 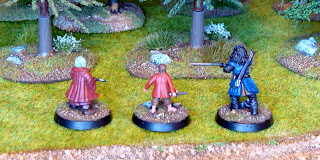 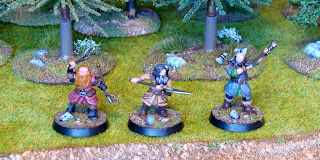 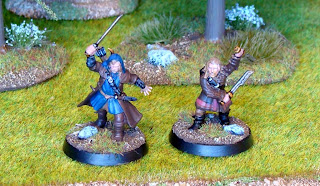 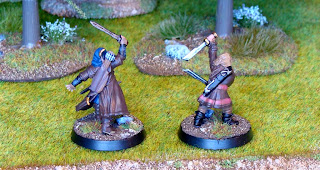 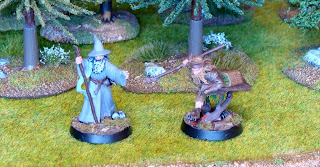 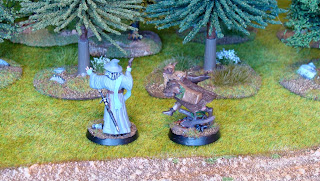 Look out for more adventures from Middle Earth in future posts!

BTW - as I effectively started these way back at the beginning of December (with only one colour!) then they cannot count towards my painting challenge total. Grrr!