But what are my wargaming plans for next year? Well, I’m not going to declare a complete list of exactly what I intend to do because plans always seem to change. Rather, here’s a list of projects from which I hope to choose a selection depending upon what I feel like doing.

Finally a big Thank You to all my readers and fellow bloggers!

What was under the tree?

Hope you all had a splendid Chrimbo. Here's what Santa brought me. 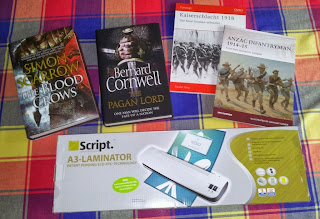 I also got an A4 shredder, so now I can preserve any winning army lists (Yeah, right!?) in plastic and consign any losing lists to be shredded.

Bernie's "Pagan Lord" ... say no more! I'm currently reading Scarrow's "Gladiator", and still have "Praetorian" on the bookshelf so plenty of Roman derring-do to read there!

The Osprey books will add to my growing collection of books about the Great War, about 30 plus now I think! The ANZAC book will be especially useful for a future project I'm considering.

No dollies, but then the lead & plastic mountain hardly needs any reinforcements!!

Snorri and Sven  - the jolly Vikings - would like to wish everyone a Merry Yuletide Season and a very Happy New Year! 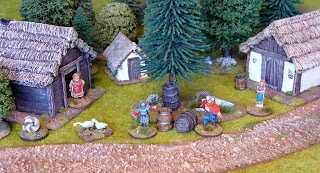 Although I'm not too sure that Mrs Snorri and Mrs Sven are so keen on the celebrations beginning under the village fir tree!? Sensibly, the geese are making a run for it too!

Finally, a big Thank You to all my readers and fellow bloggers for your support and encouragement. It really is greatly appreciated.

My first Napoleonics for absolutely ages! Chum Steve is planning a day gaming in January to celebrate his birthday. Not just any old battle either ... a re-fight of Waterloo. So he's asked everyone if they could paint up some extra troops. Here's my contribution. Two battalions of 1:72nd Italeri French Line Infantry.

These can also contribute towards my Painting Challenge total, although one of the battalions was started some time back, so only the second battalion and casualty markers can be counted. Still, that's 104 points done! 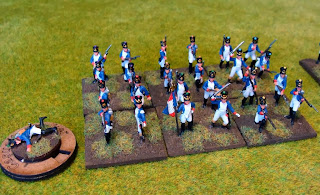 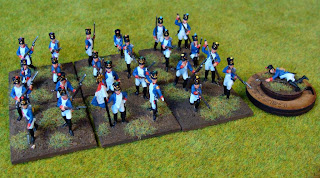 Really enjoyed painting these. It's certainly given me much to think about in terms of how I might one day get my 28mm collection to a point where I could play a game.

On Sunday I joined up with Rob (of Scarab Miniatures) to play some War & Conquest. What with being poorly recently and other commitments, it's been some time since I last played WaC so I was rather looking forward to it.

Rob was keen to use his lovely Samurai army whilst I wanted to give one of my ancients armies a run out, preferably the British Celts. No problem; the ancient & medieval genre covers a wide range of history and WaC caters for this without any issues. I know some players prefer strictly historical match-ups (this is my usual preference too) but that's no barrier to a good game.

Here's a pic of the deployment. 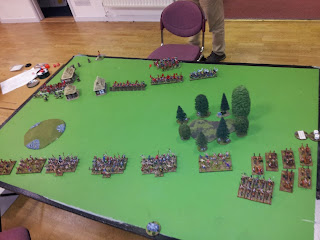 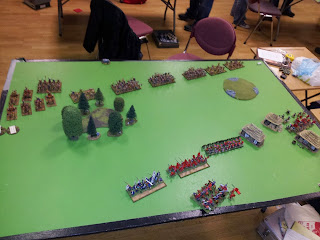 Both 2,000pt armies deployed using the Autumn variant. My objective was "Test of Strength" where I had get at least one unit into my opponents deployment zone by the end of the game whilst keeping any enemy units out of mine. Rob's was "Breakthrough" where he must get two regular units off the table via my deployment zone. But to maintain the suspense, Rob and I kept our objectives secret.

The game began with determined advances by both sides - not surprising given our objectives. However, I was rather too optimistic on my right flank with the chariots. They swept in to tackle the Samurai cavalry, rolled superbly to hit but then the dice gods abandoned me and only one Samurai fell beneath the storm of javelins. They disengaged but next turn Rob won the Strategic Advantage (again!) and the cavalry thundered in to the chariots and swept all before them. 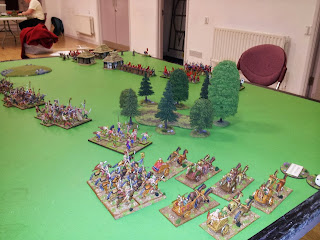 In the centre my warbands advanced in to a hail of shots from the Ashigaru bowmen and hand gunners. But at last they reached the enemy lines and butchered the missile men. 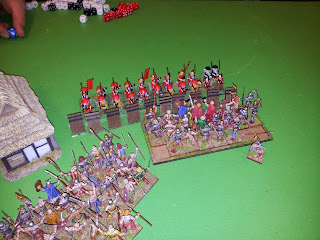 With time drawing on we finished the game after turn 5 and it was clear that whilst some of the Barbarians had done well, the Samurai were going to be able to achieve their breakthrough. So a victory to Rob, well done sir!

As for the Black Powder... Steve (along with chum Simon) is planning a re-fight of Waterloo in January to celebrate the occasion of his birthday. So he and Simon were busily sorting through boxes of 1:72nd plastic figures to work out which formations could be represented. Here's a pic of just some of their cavalry! 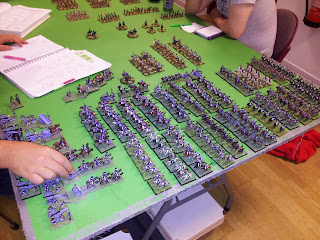 A number of us will be joining in the fun so have volunteered to paint a few extra battalions. I'm currently working on the second of two French battalions. More on this topic in a future post!
Posted by Matt at 19:32 1 comment:


Some of you may have heard about Curt Campbell’s 4th Annual Analogue Hobbies Painting Challenge. 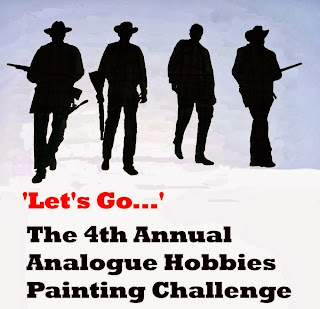 I expect a few of you have even taken part! Well, this year I have decided to unofficially join in the fun too. I say 'unofficially' as formal entries have closed - Curt can only keep track of so many painters, plus preference is (rightly) given to those who have successfully taken part before.

For those not entirely familiar with the challenge, the basic idea is that for each model you paint between the start and end dates, you accrue a certain number of 'points' depending upon the scale and type of the figure. You begin by declaring a target number of points. To add to the fun there are some bonus rounds where you can gain extra points by painting a themed set of models.

The challenge doesn't kick off until Sunday 15th December 06:01 GMT and runs until 20th March 06:01 GMT. Models can be built and prepared before the start date but no painting is allowed! Everything works on an honesty system, well what else would you expect of gentleman* wargamers.
(*and ladies too of course!)

My first task is to establish a reasonable target! This should be achievable yet still challenging. Having looked at my collections and bearing mind other potential commitments I decided on ... trumpet fanfare please ...

I shall need to get busy with those brushes!

First on the list will be some 20mm French Napoleonic infantry for chum Steve. Then hopefully it will be on to the Austro-Hungarians for The Great War. A good thing about the challenge is that any figures will count, rather than having to be part of the same collection.

A while back, whilst struggling to think of suitable festive presents for our youngest, I suggested to 'HQ' that we ought to get GW's Hobbit boxed set. "Oh, I'll paint up the figures beforehand, no problem" I blithely assured a decidedly sceptical 'Senior Officer'. Hmmm? Think she knew what she was on about! 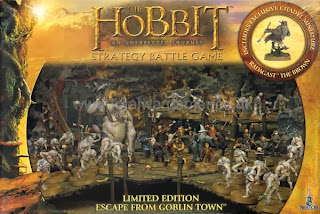 With the festive season drawing close I thought "Crumbs, better pull my finger out!". Thorin's company are wonderful figures and deserve a reasonable effort in terms of painting, but the Goblins are another matter. They can have a quick paint-job and like it.

First step was to prepare and prime them. The figures are well moulded with very little in the way of mould lines, so that saved some time. They were undercoated white using GW spray. Then I gave them a good base coat of Foundry Rawhide light. Here they are.

Drybrushing is the speed-painter's friend. The result is often a little untidy but serviceable. So out came the Foundry Boneyard light and a large brush.

After that it was a matter of picking out some details (loincloth, weapons, bags, etc) in either black or dark brown, Vallejo Leather Brown to be precise. The brown was given a wash of Devlan Mud (thinned ink would do as GW don't make Devlan Mud anymore). The black was given a couple of very quick highlights of mid and light grey. Weapons were easy; black, drybrush with GW Tin Bitz (dark coppery bronze) and a very quick highlight of GW Boltgun Metal, this gives them a suitably rusty appearance. Here's the finished - but un-based - result.

A close up. I gave the 'hair' and eye sockets a quick was of thinned Devlan mud, simply to bring out the details a little better. 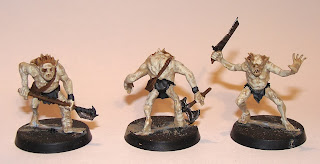