Last show of the year! (For me at least) On Sunday I joined Scarab Miniatures and chum Steve to help out with a War & Conquest demo game set in Samurai-era Japan. The scenario was that described in Wargames, Soldiers & Strategy Issue 67 “The Battle of Domyoji, 1615”. Both Steve and Rob have colourful Samurai armies and Rob also has some wonderful buildings. 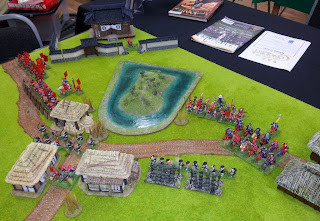 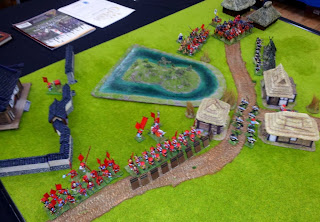 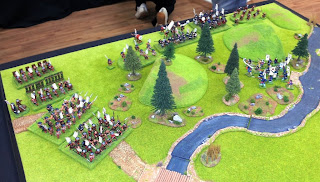 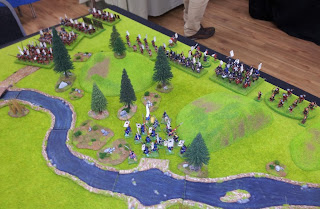 plus a close up of Steve's troops 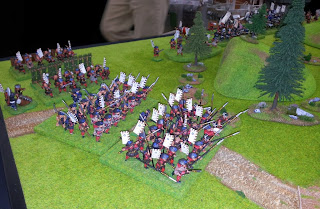 I must admit to knowing very little about the Samurai era so I was looking forward to learning about the period plus enjoying a good game of toy soldiers with friends.

However ... things didn’t quite work out as intended. At about the same time as doors were opening to the public, I received a message from HQ that the kitchen was flooding! Cue a quick dash to the car and a 45 minute journey back home. 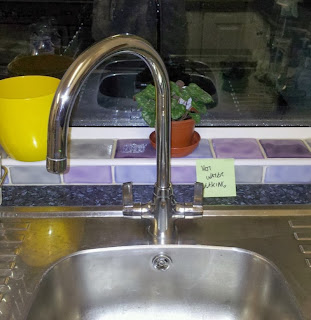 The culprit was the hot water feed to the recently replaced kitchen tap. In attempting to fix it, the cold water feed was also disturbed and began to leak. In the end I had to admit defeat :o( and simply isolate both taps. A ‘proper’ plumber is coming to fix it. I will freely admit that plumbing is not within my “skill footprint”.

After grabbing a quick bite to eat I returned to Bristol, arriving just in time to see most games and traders packing up. Grrr!

Steve and Rob had, by all accounts, a cracking battle which ended in a victory for Rob’s forces. Oh well, may be I’ll be able to play next time. Hopefully there will be some pics and notes on the Scarab forum or Steve’s blog.

I had hoped to pick up some paint, flock, etc from either “Colonel Bill’s” or “Stafford Games” but both were packing away by then; I could hardly ask them to unpack just so I could buy a few bits and pieces! However, I did manage to collect my order from Scarab – more A/H plus a lovely 1st Corps Romfell armoured car. The latter was a last minute agreement by the finance committee to make up for the fact that I missed most of the day. Thank you! :o)

Reveille itself is one of the smaller wargames shows but has lots packed in to a modest sized venue (Lincombe Barn, Bristol). Logistics seemed well organised, although they could have done with some info on their website about road closures around the venue. The chaps at LBWS were friendly and helpful, especially when we were packing up and carrying stuff out to the cars at the end of the day.

I did manage to have a very quick look round in the morning before the doors opened, although as it was still early many stands and games were still getting sorted. There was a range of traders but what I think the show really needs is for one of the big gaming companies (Warlord for example?) to come along. But I do appreciate that wargames companies cannot have a presence at each and every show. Still, it’s certainly worth popping along if you’re in the area.
Posted by Matt at 20:53

Sounds a right pain in the butt, shame you missed most of the show though!