Crumbs, but these new Viking figures from GB's new Shieldwall range have really caught my interest! 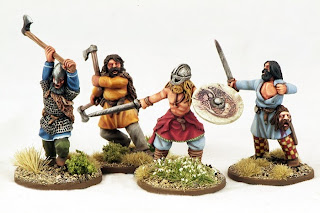 In particular, the two central figures could make a splendid diorama if I can source a few similarly dynamic Saxons. I can see the bare-chested fellow fending off one opponent with his shield whilst he despatches another with his sword!

You may have noticed that the old Wargames Table has been a bit quiet recently...? Well, I've been feeling a bit 'low' with regard to gaming for a while now if I'm honest. To be honest the Roman Fort posts were a bit of a filler in that I couldn't find the motivation to do anything else. Every time I've tried to arrange a game or a show (or even a proper painting session) something has intervened, whether it's work :o(, broken teeth (no joke!), illness, weather or DIY, etc. Whatever; it has led to a total collapse of enthusiasm - in fact for a while I wondered if I should just pack it all up and flog everything on Ebay!?

With the Summer holiday to France looming (staying near the Chemins des Dames) I decided that what I needed was a bit of shot in the arm in terms of wargaming. To this end I've ordered "Dux Bellorum" and "In Her Majesty's Name" from Osprey to read on hols. 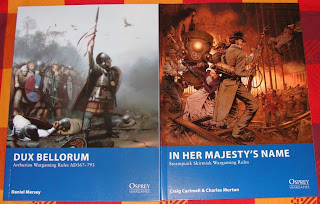 I already have quite a few 'Arthurian' figures so should be able to get playing quite quickly if I like the game. As for IHMN, that's simply something a bit different! Haven't got any suitable figure, but what the heck!?

Other reading will include books 4-6 of Harry Sidebottom's excellent Warrior of Rome series. 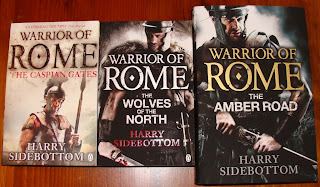 I've really enjoyed the first three books. For those not familiar, they're set in the Middle Imperial era, i.e. around AD260-ish, and principally in the east. Well written and exciting, just what a chap needs!

I may also take some figures/paints on hols, but at the moment I haven't quite figured out what I'd like. I may take some Saga Normans, or some Romano British for Arthurian gaming, or perhaps something else - or may be nothing at all. Will see how I feel before we go.

Anyway, for those who do still have their 'mojo' ;o) ... Happy Gaming!

What better way to celebrate my 250th post than with some Roman fortifications!

Here are the towers, built to go "in line" with the wall. I may also build some "corner" towers. 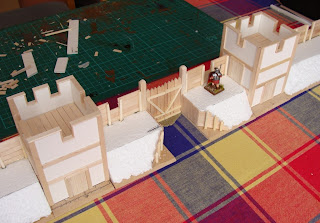 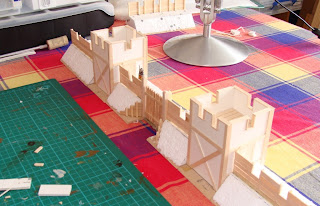 All made from 3mm foamcare, card and yet more coffee stirring sticks. The next step is to fill any gaps with DIY filler, then get some textured paint on to the polystyrene to seal it. After that comes the PVA and sand/grit texture.