After reading (a) James Morris' article in WSS, and (b) Andy Hawes' blog about playing Lord of the Rings, I was inspired to get back in to playing wargames in Middle Earth. 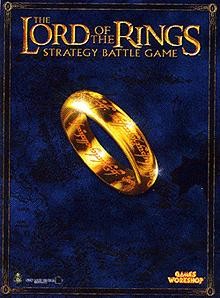 I picked up a copy of this rulebook (after selling mine a few years back!?) for a bargain price in Ebay last week.

My girls were delighted with the idea of playing some Lord of the Rings (not on the Wii) so a game was clearly in order. So I spent about 30 minutes digging through boxes (we're getting ready to move - possibly) to find the necessary forces; Minas Tirith and Mordor.

I decided to keep the game fairly simple. I left out lots of the advanced rules such as Might, Will & Fate, different weapons, etc. The result would have been a straightforward encounter, but I decided to make things a little more interesting... the premise of the scenario was that some of the outlying farms near the White City were being attacked by roving bands of Mordor Orcs. Gondor must strike back at the enemy!

The men of Minas Tirith advanced cautiously in to what appeared to be a deserted village; clearly some Orc mischief lay in wait.

My girls named their leaders "Bobamir" (known as "Bob") and "Dungbutt" - respectively. They were obviously getting in to character!

The Orcs were hidden in the buildings and only appeared as the men advanced. Soon the forces were engaged in fierce combat. The Orc ambush had started well! 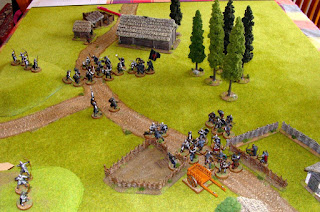 Here's the fighting at one end of the village. 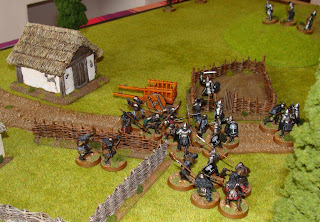 This is Dungbutt (big axe) in the thick of the fighting whilst "Bobamir" waves his sword ... "heroically"? 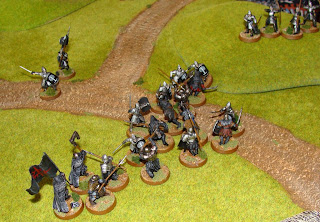 The battle of the banners! By now 'Bobamir' has got stuck  in - he's behind the banner. 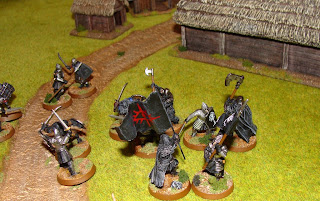 The battle was a very close fought affair - and jolly good fun too! The archers on both sides took out a few of their enemies out before it was time to settle things with sword and shield. The fighting gradually went the way of Minas Tirith. By about turn 7 or 8 the Orcs had incurred enough casualties to force Courage tests. The first round saw only a few warriors head for Mordor, but in the second round things were different. Dungbutt failed his roll and legged it, as did nearly all the remaining Orcs. A solid victory to Gondor!

A really successful game and good fun all round. My youngest has already decided that Orcs are not for her, she wants Elves!

Having recently "completed" my Anglo-Saxon (or perhaps Anglo-Danish) army, I thought you might be interested to see a few pictures. Here it is.

The King and his banner bearer take centre stage, accompanied by his Huscarls. To the right are a unit of Thegns, to the left and behind are units of Thegns/Ceorls. Two units of skirmishing Geburs provide some ranged support. A pair of Ealdormen and a Bishop provide some additional leadership.

Here are some closer shots. 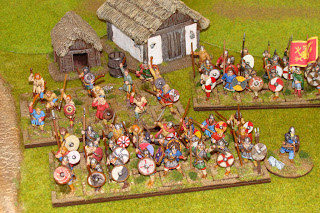 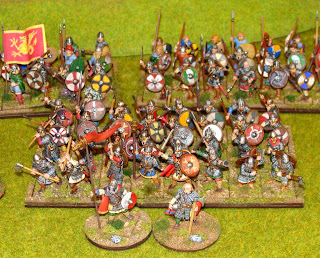 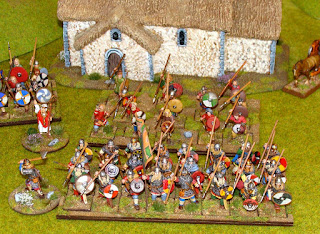 As with most armies, it's still not really complete. I plan to add at least one more unit of Thegns/Ceorls and maybe some skirmishing Geburs with bows. After that I'll look to add some allied cavalry or archers.