The weekend of 17/18 November was the Warfare 2012 show in Reading and we were there with a War & Conquest demo game. We played the same game as we put on at Colours in Newbury earlier this year, "The Battle of the New Road".

The Romans are trying to clear the land ready to build a road, however the proposed route passes right through a sacred Celtic shrine where stands an mighty, old Oak tree. Needless to say that the matter can only be decided with swords and spears! You will be able to find out more about this game in a future issue of Wargames, Soldiers and Strategy.

First though a few words about the show... It wasn't as good as Devizes or Colours, mainly because the venue itself is a really bit below par IMHO. The very uneven carpets laid to protect the indoor bowling green were a real hazard - I saw plenty of people trip and stumble. To be fair the club have complained to the venue about this. Also, the logistics were a bit chaotic. Getting there quite early I ended up being pressed in to helping some of the traders get set up with tables and chairs - the stewards seemed a bit confused!? Personally I was happy to help but some of the traders were less than pleased. OK, running a show is quite demanding and there may have been a good reason for the confusion. Hopefully it will be better next year.

That said, I had a great time playing War & Conquest with friends, plus chatting to other gamers about a wide range of topics. I especially enjoyed talking to all those gamers who came up to tell us what a great game WaC is. Thanks!

Being busy with the demo game I didn't have much time to look around, other than a quick dash around the traders to pick up my pre-orders. So apologies for no pics of anything else.

Anyway, on to the game. Here's the deployment. I led the Romans whilst my lovely wife led the ferocious Celts. (This was something of a 'grudge' match as recently I'd given the Celts a good thrashing which was followed by a close win in a game of Saga with my Saxons!) Rest assured the Celtic leader was in no mood to take prisoners! 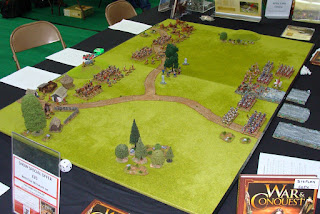 A view from the Celt lines. Both armies were around 1,900 points - mainly because this happens to suit my collection. 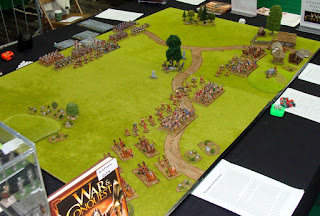 A close up of the Roman army. Note the engineers busily clearing the ground. 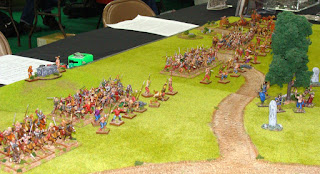 It's turn 2 or 3 and both armies were manoeuvring ready to get up close and personal with their foe. On the flank the Celtic cavalry have been seen off by some good archery from the Auxilia. However, those chariots are giving me the heebie-jeebies. Their javelins almost caused a morale check on the small unit of Auxilia. In the centre the loyal Celt skirmishers (i.e. those that see the benefit of roads, wine, aquaducts, wine, drains, wine, etc) are trading javelins with their more rustic cousins. 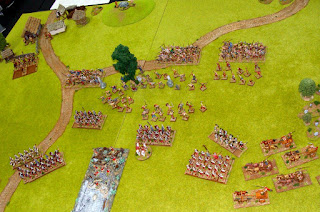 At this point I was feeling fairly confident. The two Legionary cohorts should be able to deal with two of the warbands whilst the Auxilia and Legionary recruits should handle the rest! I was soon to see that confidence evaporate!

Next turn and the chariots make a glancing attack (one of the really great rules in WaC) on the recruits but they hold firm and just one falls under the hail of javelins. The chariots then move off around the flank and rear. 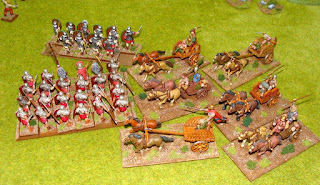 Meanwhile in the centre things were hotting up. The loyal skirmishers were butchered to a man and the victors then took their blades to the Engineers. However they made good use of their dolabra against the beserk warriors. The Legionary cohort was another matter entirely... clearly the Centurions mis-timed their orders to throw pila and the Celts swept in to the cohort in a storm of blades. The (Veteran - no less!) Legionaries were soundly beaten and routed in spite of using a precious Strategy dice (another brilliant rule in WaC). Their retreat became a shambles and they were hacked to pieces. This proved too much for the Auxilia archers who also fled. The Roman left flank was now looking perilously weak. 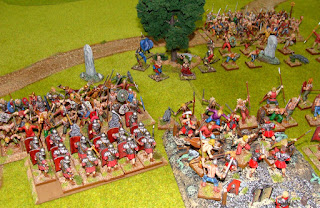 Here we see one of my rolls for armour saves! If only I could do the same in combat. 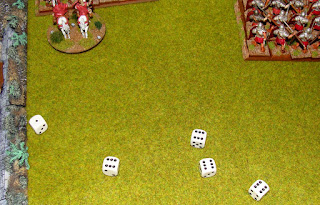 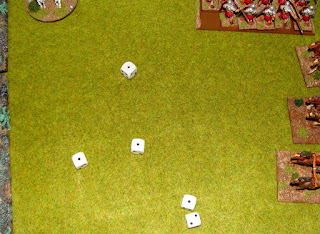 This pic from turn four shows the situation a little more clearly. Those chariots are now free to roam behind the Roman lines. Only the Auxilia hold the left flank. In the centre the fight between the heavily outnumbered Engineers and Celts continues, but the Celts are gaining the upper hand. The remaining Legionary cohorts (one veteran and one raw recruits) push on to engage the remaining warbands. 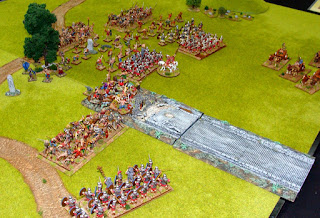 It's turn five and the Celts are clearly in control of the field. The Celt cavalry have finally returned and are hounding the Auxilia archers, effectively stopping them from rallying by imposing a -1 Morale effect, not to mention showering them with javelins. In the centre the Engineers have all be slain. The central warbands are holding the Romans in place and inflicting casulaties, whilst on the Roman right flank the Legionary Recruits have been soundly beaten and routed. 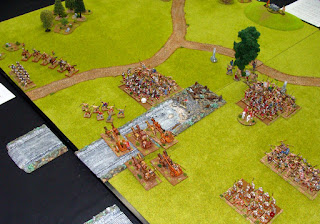 The final turn saw the other veteran cohort routed and slaughtered, along with the Roman general! Both the recruits and archers fled the field. Only the brave Auxilia cohort in the centre stood firm, but with enemy all around they were clearly doomed. A solid victory to the Celts!

Another enormously fun game of toy soldiers with moments of high drama and genuine laughter. What more could you ask for from a wargame?

Sandbags for the Great War

Amongst the many goodies I picked up at Warfare (Reading) this weekend were these rather splendid sets of resin sandbags. They even come pre-painted! Here's some fine chaps from the BEF making good use of their new cover.

A close up shot. Hopefully you can make out the wonderful 'texture' on the bags. 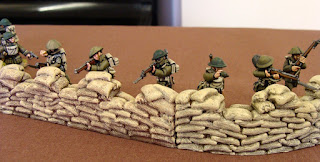 I also bought a pack of straight sections.

These are the two packs, made by Pegasus Hobbies. Pack one is six straight sections - and they all seem to be slightly different. The second pack has two short straight sections plus four rounded corner sections. 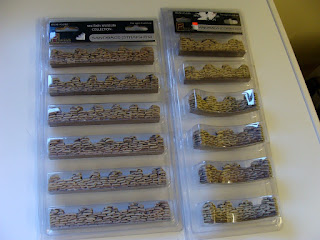 More about the (not so good) show in a future post. However, the games of War & Conquest we played were great fun!