These sort of figures are handy for representing different factors in various rulesets ... For example, Disorder in War & Conquest, Fatigue in SAGA, Casualties in Hail Caesar, etc. They also make good battlefield debris.

All the figures are from Gripping Beast's generic dark age casualties pack. Here they are. 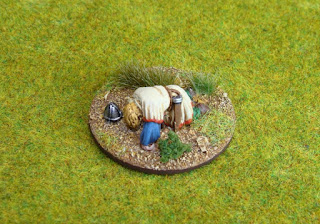 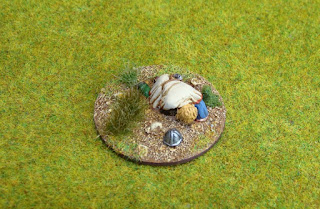 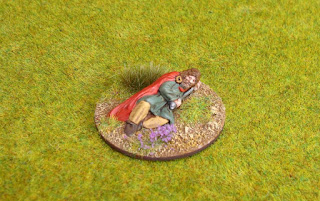 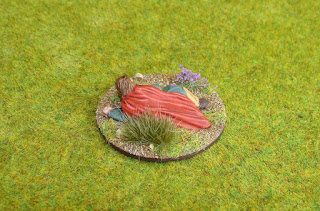 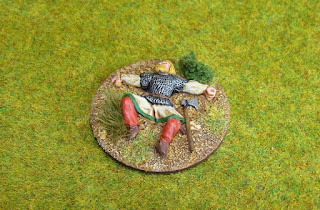 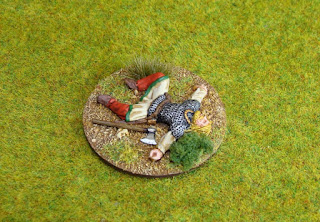 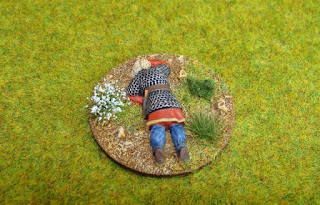 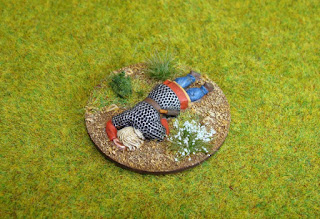 I've bought some Warbases numbered, rotating casualty marker bases. These have a space on top for your casualty figure. So the box of Perry Crusdaer casualties I picked up at Colours may well appear in that fashion. For now though, I really need to get on with painting some more Saxons.

My good lady has been at it again ... with a paint brush that is ;o)

Here's a few more Bondi to add to those in her SAGA warband and make a unit of 24. 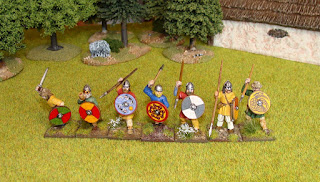 And now a closer picture.

This week I hope to make some progress with a mix of scenery, some lovely Thegns (aka Musketeer Gedriht) and may be some casualty markers.

Ok, this is NOT a wargames related post. But after tonight's Strictly Come Dancing premiere I just couldn't resist. I promise that 'normal' service will resume very soon - perhaps tomorrow - with some Vikings. 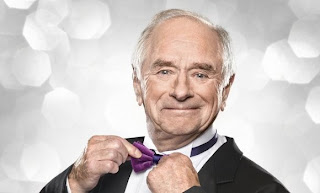 For those who have no idea who Johnny Ball is then have a look here and here.

For me, he was one of my childhood heroes. The man who taught Maths and Science on TV in a variety of amazing and interesting ways. Now he's on Strictly at the venerable age of 74. Well done that man!

Colours, Man Bags and other stuff

Saturday 8th September was the first day of the Colours 2012 show. Just like when we went to Devizes it was another gloriously sunny day. The show is held in the grandstand at the Newbury Racecourse. Being such a high spec venue I thought it obvious that they'd have air-con ... but oh no! By George did it get hot!

However, I will say that it was a very well organised show from my perspective, i.e. putting on a demo game. Everything was well laid out and the venue has ample free parking along with a number of reasonably priced coffee and food outlets. The show is spread over three floors and is well attended by a good range of traders.

As part of the ongoing process of showing the world just how much fun War & Conquest is, my wife and I
brought along our Celt and Roman armies to put on a game with Rob from Scarab Miniatures. There was also Steve from Bristol Big'Uns on hand to help out with sage tactical advice.

Rob created a marvellous scenario involving the Romans trying to build a road which will result in the destruction of a tree and standing stones sacred to the local tribes. Well, the show is held in Newbury after all. (Note - for those not familiar -  Newbury was the site of a well publicised "eco-protest" a few years ago when developers attempted to build a by-pass road.) So the scenario seemed quite apt.

Here's a pic from the first game. Apologies, but I forgot my good camera so had to use my phone!? 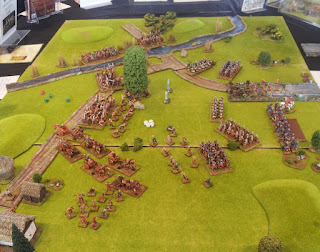 The next three pics are from the second game - fought by Steve and Rob whilst we had a look round the show. The road has been built part way on to the table whilst the Roman army spreads out to give the engineers protection as the tribes advance. 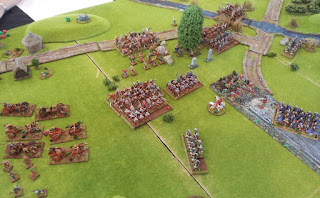 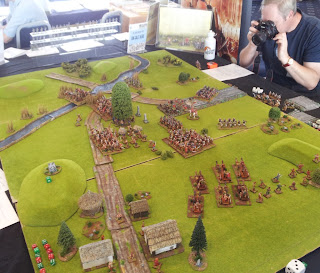 Above is Scarab supremo Rob taking a few pics. Below we see things from the Celt perspective.

Both games were great fun and proved to be very closely fought battles. There were plenty of people who stopped by to say hello, chat about War & Conquest or gaming in general. Many thanks to all of you!

As the title said ... I've bought a new "Man Bag", here it is, with a Saxon Thegn on top to give you an idea of scale. Bought from the excellent Figures in Comfort. 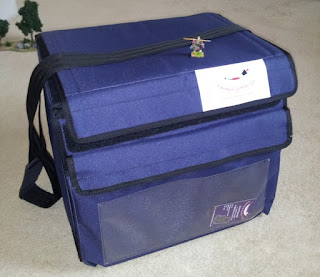 Our model collection has reached the point where my GW carry cases are simply not enough to store everything. I bought the cases years ago when I could get a 50% discount. The "Maxi" bag above holds 8 standard trays which equates to almost 300 figures. This works out slightly cheaper than current GW cases, plus you can get a wide range of trays to suit your collection.

Other goodies purchased at the show included a box of the new plastic Norman Infantry from Conquest Games. I nearly bought their Nuns & Monks set too. CQ plans to expand the range to include a bishop and a monk on donkey (Brother Asser?). A quick stop at the Dave Thomas stall saw me buy some Villagers and Pilgrims, plus some casualty figures from the Perry Crusaders range. Warbases provided me with plenty of new bases along with some excellent numbered casualty bases. Should have these done soon!

Anyway, a good show, some fun games and lots of gaming goodness. Certainly a show worth visiting.

Way back awhile I decided to multi-base some of my Celts to speed up the process of deploying them before battle. However, at the recent W&C Gaming Day, Phil was kind enough to point out that the basing hadn't quite been finished off properly. So, just for Phil, here they are with completed bases! 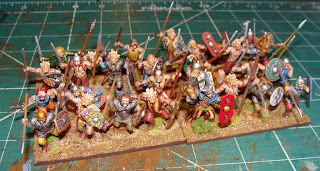 Whilst having a short rest from painting models, my lovely wife has painted a couple of pieces of resin scenery. First is this thatched wattle animal pen from Grand Manner. 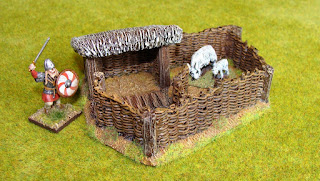 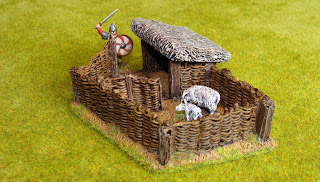 Next is this rather nice little boat from Dreamholme Collectables.

I suppose I need to make some fishing nets and barrels of herring next!?

I like to add a few little extras to battlefields rather than just game around a building, a hill and a few trees, and these are exactly the sort of items I look out for at shows.