Scarab supremo Rob Broom took along his War & Conquest "Amphipolis" demo battle to the Devizes Wargames Club show "Attack! 2012", so my wife and I went along to help show off the game, play toy soldiers and generally chat to other gamers about what a great game W&C is.

The first game saw me lead the Spartans whilst Jennifer took command of the Greeks. Now, I forgot to take any pictures (doh!?) so you'll just have to take my word that whilst the Spartans fought like .. err .. Spartans, it was a narrow win for the Greeks! A nail-biting game where victory was held in the balance until the final turn.

Whilst playing we were able to chat to visitors, explaining the rules mechanisms, the background to the game, etc. This is something that I rather enjoy doing and I hope to attend some more shows with Rob (so please do stop by and say "hello").

Game two was a rematch but we swapped sides ... and I remembered my camera! 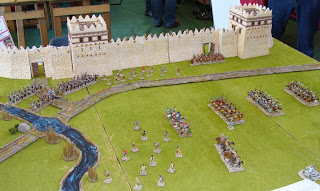 Above we see the Greeks boldly marching past the city walls, so Brasidas springs his trap and the Spartans march from the gates! 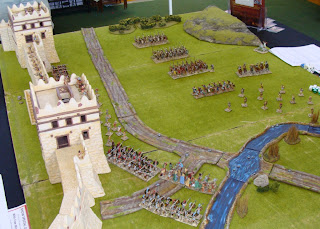 From the Spartan point of view. 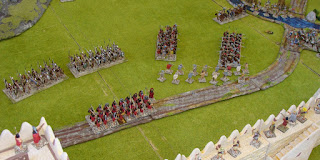 A couple of turns in to the game and the Spartans are going on the offensive. On the left I was trying to get my two phalanxes aligned to take on the Spartan veterans together, but in my haste to manouevre them I failed some command tests, so it was only at this point that they managed to get their act together! If the Spartans won the roll off for Strategic Advantage in the next turn then the Greeks would be in real bother. 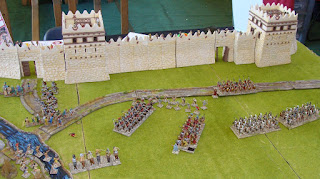 Here's the situation from above the Greek lines. On the left you can see that the Thracians have despatched a unit of Spartan Hill Tribe allies and are engaging an allied hoplite phalanx in the flank. Ouch! 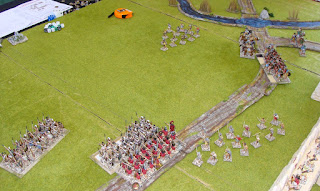 Both sides used precious Strategy Intervention Points to win the roll off but the Greeks seized the initiative and launched a ferociuos attack on the Spartans. On the left (of the picture) one of the two Greek Hoplite units failed their command test to simultaneously charge an enemy so the other took on the veterans by themselves! Across the battlefield the Greeks attacked with their own veteran hoplites, plus the cavalry thundered in to the Spartan flank. A tense round of combat saw the Greeks victorious and the Spartans routing. They were slaughtered as they ran 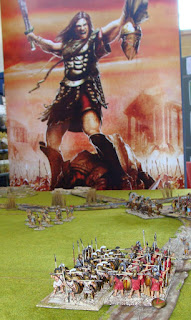 Brasidas presides over the carnage! The Spartan veterans were dealing out pain to the Greeks here but they held on and fought back grimly. You can see the shield placed by the Spartan unit to represent their "push and shove" bonus for winning the round of combat. 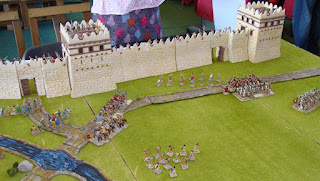 Another view from above the Greek lines. The Thracians have butchered the unprepared phalanx of allied hoplites and push on to make sure the hill tribes keep running (rallying with enemy units nearby is much harder in W&C)

As you might expect it wasn't long before the remaining Spartans were overwhelmed and put to the sword, giving the Greeks a decisive victory.

So it was two-nil to the Greeks after two splendid games. Several visitors stayed at the table throughout the games providing commentary, offering advice and generally joining in with the good natured banter of wargaming. Many thanks to all of you who visited and asked questions. Perhaps we'll see you at more shows in the future.

The soldiers in a fort need somewhere to sleep, eat, etc. So here's a small barracks block to go in to the outpost fort. 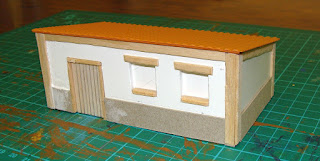 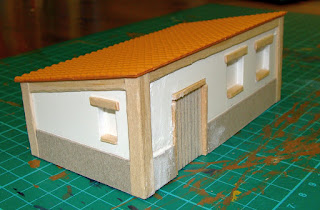 I forgot to take step by step pictures but hopefully you can see that it's basically a box with a sloping roof (the area of which is exactly the same as a Wills plastic pantile roof section). The wooden areas are simply yet more coffee sticks. The door is scribed balsa wood. I added the card strip around the lower part of the building to denote the area that will be painted a mid-red colour, whilst the plaster above will be light cream.

I've now textured the walls with masonry paint, so it's ready for some undercoat and painting. There's no chimney pots as I've found these to be quite fragile. After all, it's wargaming scenery, not an exact historical model.

I may build another as one seems a bit lacking, although I might make a start on a watch tower, or a grain store ... maybe I need a bigger fort?

Here's an update on progress with the fort. 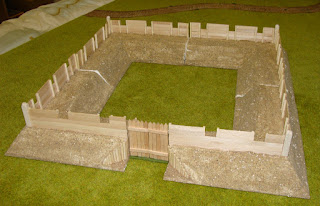 The embanked slopes have been smoothed out with polyfilla and sand/grit glued on with PVA. 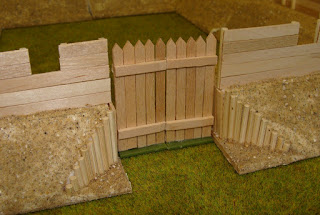 I've made a gate using more coffee stirring sticks and match-sticks. Plus I've cut away some of the earth around the gate and re-inforced the bank with logs made from kebab sticks (not likely to use for BBQ's given the "Summer" weather so far!) 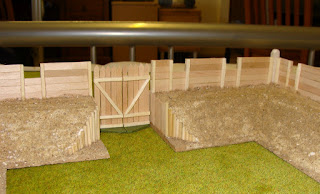 Here's the gate from within the fort. I mounted the gate sections on small pieces to plastic to improve stability and cut it at angle so they will easily stand in the open position. I've made properly hinged gates before but they are generally too fragile.

Next comes the painting! Or maybe I should build a barracks block ... and a watch tower? Or perhaps I should paint a few more chaps to man the ramparts?

Sunday evening and another trip to Iron Acton for a game of Saga againgst Orange Dave. As it had proved to be quite a hectic day I arrived a bit later than usual so there was only time for one game.

Initially we rolled Clash of Warlords but having played that a couple of times Dave went in search of a river so that we could play the Battle at the Ford scenario. Had I been more organised I could have brought my nice 'Coritani' rubber river, but Dave managed to locate a suitable stand-in in the form of some strips of blue vinyl. Fords and bridges were more of a problem so in the best traditions of wargaming ... we improvised! A low rocky hill became a ford and a resin building roof section became a bridge.

I had planned to ignore one crossing point and mass my forces at the other, but a quick re-read of the scenario showed that victory points were scored for getting troops across the river, not holding the bridge/ford. So I clearly needed to contest both crossings.

My Warlord and two units of Hirdmen (I was playing Vikings for a change) held the ford whilst a unit of Hirdmen, a unit of Bondi and a unit of Thralls rushed for the bridge.

(Apologies if the pics are a bit fuzzy. Mobile phone, hall lighting, etc) 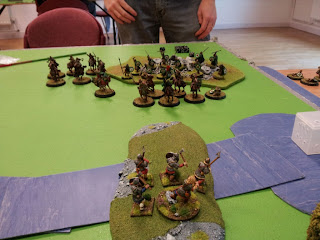 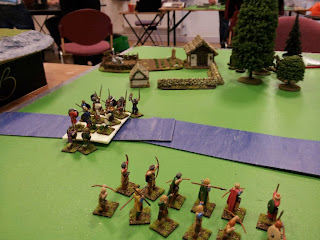 Playing against the Welsh is rather tricky as they are all equipped with javelins (free shooting at end of any movement) plus they have the infuriating ability to "taunt" your troops to move towards the nearest enemy unit. Some battle board abilities can help offset these abilities, but the Vikings could do little to prevent the Welsh exploiting their advantage. I was soon losing Saga dice as units disappeared under clouds of javelins.

Most of the casualties I suffered in the game were due to the masses of Javelins thrown at my chaps. Taunting your enemy in to javelin range, hurling lots of javelins, then mopping up the survivors with mounted hearthguard is definitely the way to win with Welsh. 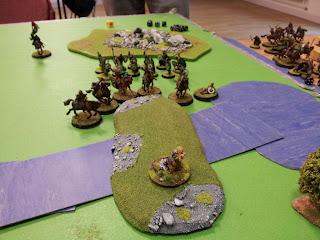 Here's my Warlord defending the 'ford' single-handed after all his faithful hearthguard had been slain. He managed this for a few turns (thanks to a great combat ability) but evetually the javelins found the target and he fell. At the end of the final turn we added up victory points. Welsh 14, Vikings 3, so an overwhelming victory for the Welsh. 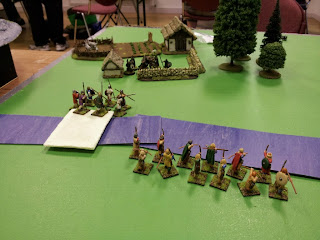 This shows the Bondi just making it across the bridge, whilst the Thralls provide little in the way of help.

This was probably my 15th or 16th game of Saga and, to be honest, it was a bit of a disappointing game. That's no criticism of the rules or my opponent! It was just "one of those days". In fact I've yet to win a game of Saga. May be it's not the game for me after all?

I should be painting more lovely Aventine Romans for the next War & Conquest gaming day but after watching "The Eagle" recently I was inspired to build something for my Romans... a small "outpost" fort.

If I may digress slightly; we have very recently put our house on the market, so my affirmation that I needed to build some Roman scenery was greeted less than enthusiastically by the Chief Exec. However, I promised not to make too much mess and to tidy up when I was done.

Anyway, I'd like to build a "proper" fortress but since I usually game on a 6' x 4' table I thought a more modest option would be best.

Here are the wooden walls. 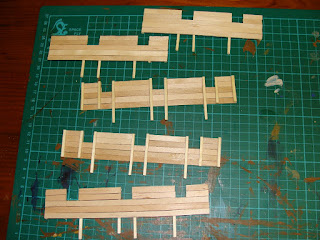 I opted for the 'planked' look as (a) the materials were free and (b) I made a log pallisade style fortification years ago and trimming all those twigs was a lot of effort. These are made from coffee stirring sticks liberated from my favourite coffee shop, along with large match-sticks for the posts.

The wooden walls will be mounted on earthern ramparts; made from polystyrene sheets (recycled from furniture packing). 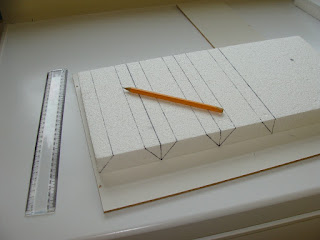 Tip here is to cut both sides of the sheet rather than trying to cut all the way through from one side. It gives a cleaner finish and makes less "polystyrene shrapnel".

Here they are trimmed up and ready for the walls to be added. 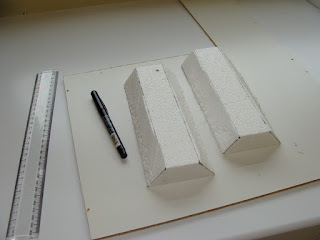 The fort will (initially, as it's an outpost) be made from four corner sections. 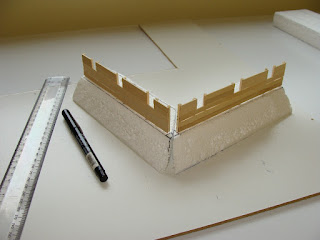 Again, from the other side. 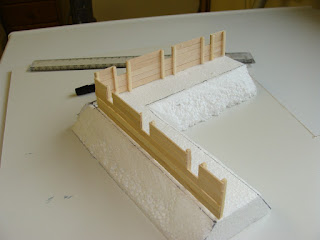 These two sections will be mounted on an 'L' shaped piece of hardboard for extra durability. Any gaps can easily be covered with some polyfilla.

Here's the rest of the sections. 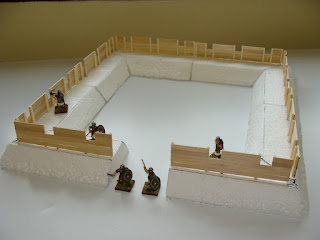 Note that a gap has been left for the gate section. Initially this will be a simple gateway, but later I may build a gate with towers, etc. 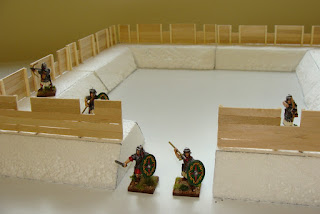 Hope you found that interesting. One of the best things about this is that most of the materials were free or very low cost. By making it in a modular form with the same shape at each end of the sections I can easily build more sections later

I plan to build a small tower and a barracks block for the century of Auxilia that might man this type of fort. More to follow soon I hope.