After spending several months in the Dark Ages with Saxons, Vikings and Saga (and successfully completing two large warbands), I'm now firmly back in Roman mode.

One of the reasons is the forthcoming Scarab Miniatures War & Conquest Gaming Day on the 19th August. I had thought to try to get enough Saxons done for this event but (a) I can't paint that fast, (b) many of the other gamers will be bringing along suitable allies or opponents for my Romans, so Rob has persuaded me to use my Romans ... and paint some more! For details of the event please have a look here.

Another important reason is my discovery of Aventine Miniatures newest Early Imperial Romans. I knew about their 160-190AD range (with Niedermörmter style helmets) but my existing range of figures had the Gallic style helmet, so imagine my delight when I saw the range had expanded to include figures with Gallic 'I' & 'J' style helmets!!!

I ordered a couple of packs and Keith very kindly sent me a mix of figures so I could get a better look at the range. Here's a pic (from Aventine's website - Keith, hope that's OK). More pictures and details on the Aventine website http://www.aventineminiatures.co.uk/ 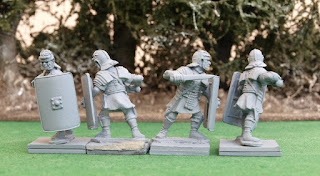 These figures are absolutely superb!!! I've not been so excited about a range of figures for ages. But first I must say that Aventine's customer service, speed of delivery and packaging are excellent.

Now for the figures themselves... the detail is crisply cast with very few mould lines and almost no flash, so very easy to prepare. Scale-wise they are at the larger end of the 28mm spectrum, so should match well with Saleh Foundry, Black Tree and Copplestone figures. They are available in a range of poses which will allow you to build some very dynamic looking units, clearly these fellows are keen to get to grips with the enemy. Standing / advancing poses are also in the range if you want more traditional looking 'single pose' units. A few of the figures come with a separate weapon arm; I presume this is to make casting of the figures easier given their more animated stance. The joints are well cast with plenty of 'surface contact' so the slight extra assembly should be straightforward. Pila and shields are also separate and nicely cast.

I also got a few command figures, Centurion, Signifier, Cornicen, etc. These are even better than the Legionaries, if that's possible! A couple of the figures are available with a selection of helmets so you should be able to make each command group slightly different.

If you're interested in seeing some painted examples then make sure you have a look at this post on BigRedBat's superb blog. Lovely work!

In summary, it looks to be a wonderful range of figures and I'll certainly be adding them to my collection. I may even sell on some of the unpainted Black Tree figures and replace them with Aventine ... although you can never have too many Romans.

As promised here's the battle reports from a few Sundays ago when, in the glorious warm sunshine, I headed for the Bristol Biguns club in Iron Acton to enjoy a some games of SAGA against fellow Dark Ages enthusiast Dave. Our previous encounters had been close affairs and honours were even, so all was to play for!

I used my 6 point Anglo-Danish warband consisting of

Dave has switched from Normans to playing Welsh. This definitely suits his playing style better. Interestingly Dave is using his Lord of the Rings collection of Rohan figures as Welsh, and very good they look too. He also had 6 points.

Hero of the Viking Age "Maredudd ab Owain" (He wasn't the conqueror of Gwynedd and Powys for nothing!)
2 x 4 Mounted Teulu (pronounced "Taily", Hearthguard)
3 x 8 Priodaur (Warriors, fielded as 2 units of 12)

All of the Welsh troops were equipped with javelins, which in SAGA allow units a 'free' activation to shoot at the end of any movement. This is definitely a strong point for them.

A quick word about the photos ... all taken on my new phone so they're not quite as good as I would normally expect but hopefully you'll like them.

Game 1 - Clash of Warlords
As we hadn't played for a little while we decided to keep the first game simple and play 'Clash of Warlords'. That's six turns in which your objective is to engage the enemy Warlord in combat and slaughter him. Otherwise the result is decided using Victory Points.

The terrain was set up to represent a small village/farm with all of the buildings, fields and fences counting as uneven ground. 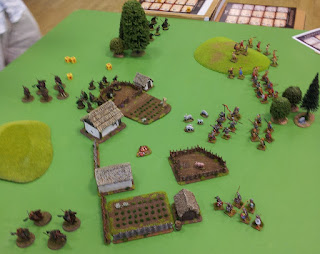 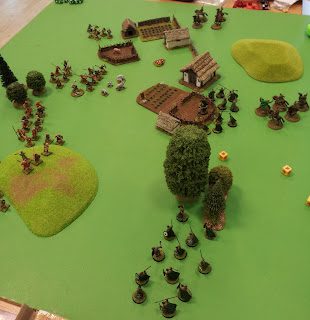 It soon became clear that Dave's plan was to use the cavalry to pin some of my troops in place whilst his warriors taunted mine thus encouraging them in to javelin range and/or uneven ground.

This taunting ploy worked really well with my Geburs (bloomin' levies!) on the right flank who totally lost their heads, rushed forward and were duly hacked to pieces by the more skilled Welsh warriors. 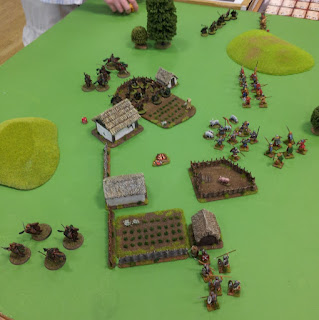 The Anglo-Danish Huscarls and Warriors were more restrained and gradually advanced to engage the enemy. I was determined to win the game in true heroic fashion by killing Dave's Warlord. However, his mounted troops were just too manoeuvrable for my infantry.

In the penultimate turn of the game the Anglo-Danish warlord and his finest Huscarls made a rush for the Welsh Warlord but only received a shower of javelins in reply as the horsemen skipped out of range.

Infuriated the Anglo-Danes turned on a hapless unit of Welsh warriors (Dave didn't have enough activation dice to move them out of harms way) who were slaughtered in a welter of blood and gore.

With both Warlords still standing after six turns it was time to add up the VP's. The totals were Welsh 12, Anglo-Danish 9. A very narrow win for the Welsh with just a handful of models making the difference.

We decided that the Welsh would now be flushed with success and boldly attempt to raid the Saxon lands. When we initially set the terrain up and deployed we forgot to read the scenario properly and didn't see the bit about players bidding points for the village!? So we started again ... had the Welsh ended up as defenders of the village then we decided that it would represent the Anglo-Danes counter attacking a Welsh raiding party.

But, Dave bid the full six points, whereas I reckoned the village could be held with just four! 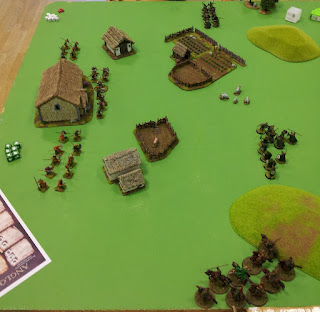 Dave knew he had to attack hard and fast if he was to achieve victory within the allotted six turns. To win I had to have a unit still holding any one of the buildings.

After a couple of turns I moved a unit of Ceorls in to the Church where they would be better protected from the Welsh javelins. This proved to be a very sensible ploy.

Taking full advantage of nearby cover, these Welsh warriors crowd in to the pig pen, whilst the pig makes a hasty exit! 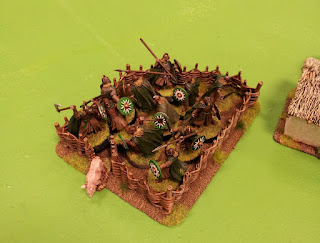 The Welsh Hearthguard (fielded as a unit of 8 this time!) and Warlord attacked a unit of warriors only to be soundly beaten and driven off. But alas the brave Anglo-Danes could not repeat the process as the Welsh attacked a second time.

The victorious cavalry then went on to slaughter a small unit of Huscarls. The destruction of my right flank left the Warlord dangerously exposed. Dave took full advantage and piled in his Warlord, plus a unit of Warriors. My Warlord fought bravely but, without support from his own warriors, was soon overwhelmed. 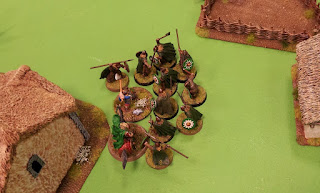 So with 2 turns to go I had a few Huscarls (now holed up in the small farm house) and a small unit of Ceorls in the Church. I'm pleased to say that it all came down to the final turn. Unable to roll the right combination of SAGA dice to allow him to taunt the Anglo-Danish in to coming out of the buildings, Dave launched a series of desperate attacks. The Huscarls were heavily outnumbered and were soon dragged from the farmhouse and hacked to pieces. But the Ceorls proved to be very stubborn.

With just one activation dice left in their last turn, the Welsh finally broke in to the Church and put the Ceorls to the sword.

A jolly close fought game with some hilarious (and some very tense) moments. I look forward to a re-match!

What did I learn from the games in terms of the rules and playing with Anglo-Danes?

It's important to keep more than one unit of Hearthguard or Warriors near your Warlord as you close with the enemy. A surprise attack can leave your Warlord standing around on his own which makes him rather more vulnerable.

Using Hearthguard as units of 6 rather than 4 makes them far more durable. It does mean spending 3 points to get two units but after all they are your warband's finest!

Avoid getting Levies in to combat. (In the first game I had no choice due to the Welsh ability to taunt their foes.)

Enjoy your games of SAGA.