Here's my Anglo-Danish Warlord in all his war-like glory! 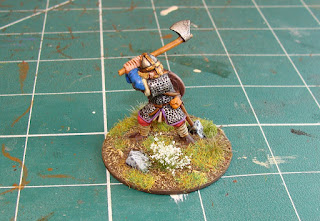 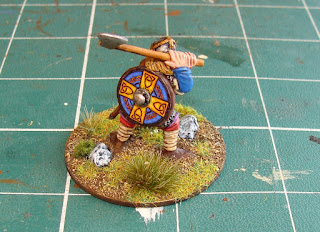 That takes my warband up to a comfortable 8 SAGA points.

Later this week (or at the weekend) I'll be posting some battle reports following their exploits against Dave's Welsh warband.
Posted by Matt at 18:42 8 comments:

I found a scrap of MDF whilst tidying the garage the other day and was inspired to create a vegetable garden for my more green-fingered Saxons to tend. That's when they're not away giving the Vikings a good thrashing! ;o)

If you look at the Saga rulebook (or WAB Shieldwall) you'll see similar scenery featured in a number of pictures so it's clearly essential. However, I've no clear idea on what the Saxons grew but thankfully such knowledge it not essential for a good game!

Anyway, enough rhubarb (pun intended) from me, here it is. 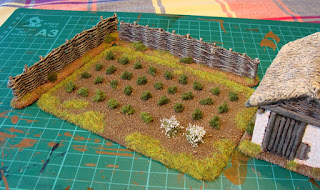 OK, it's not all turnips, the white flowers are probably peas ... oh dear! Well, it is the Chelsea Flower Show this week after all.

Normal service will be resumed soon.
Posted by Matt at 19:16 8 comments:

With the Vikings now able to fire/throw sharp sticks at the Saxons it seemed only right and proper to give the Saxons the ability to throw a few rocks/sticks back at the Vikings. So here are 12 Saxon Levy armed mostly with slings, plus a few with javelins and bucklers. 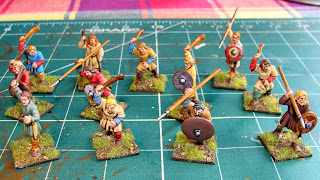 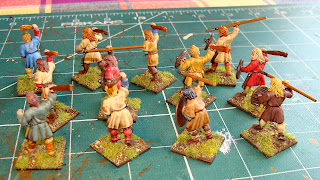 All Gripping Beast figures. As usual, block painted on a white undercoat, dipped/washed and then quickly highlighted. I may add a few more bucklers but that was all I had ready so they will do for now.

It's just a pity that Levies don't generate SAGA dice!

Hot off the painting table, here are a unit of Viking 'levies'. Ideal for Saga but I do hope to use them in games of W&C when I've got more troops painted. 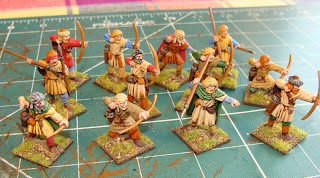 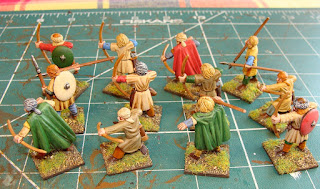 All block painted over a white undercoat, then dipped/washed followed by matt varnish and some highlights of the original colours.

Last weekend saw us head south for a day in Exeter, where I attended the Legionary 2012 wargaming show run by the Exmouth Wargames Society and held at the Matford Centre.

As mentioned in the previous post I was there to help top Wargames Table chum, Rob of Scarab Miniatures, to run a demo game of War & Conquest.

Rob has a good over of the game (which I must say was splendid fun!) on the Scarab forum here. But here's a couple more pics anyway. 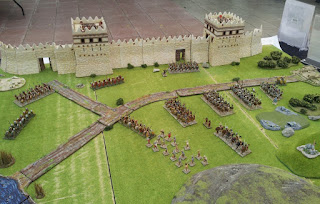 This was only the second time I'd fought with Greeks and Spartans. Mostly Scarab miniatures, and lovely they are too! 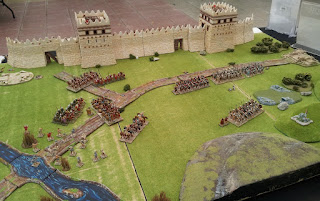 In the pic above you can see that my Spartans have routed a phalanx of Greeks in the centre. My chaps did very well in the early stages of the battle but the balance of power gradually swung to the Greeks who were able to claim a solid victory!

Demo'ing the game to visitors, chatting with gamers, etc, was really good fun. Many thanks to all of you who came over to chat and watch.

I managed to grab some time to have a quick wander around the other games going on at the show. Here's a few pics.

This game, by South Somerset Wargamers, is set in the late Victorian era and blends a bit of history with some rather bonkers fantasy/steam technology. 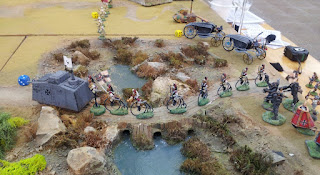 I believe the theme was a Prussian invasion of Devon. In the pic above you can see Prussian penny-farthing "cavalry". Note the heavily armoured penny-farthing on the right. 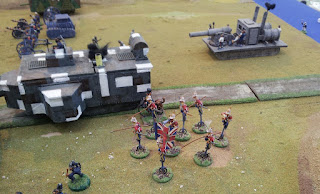 These were my favourites ... plucky British unicycle "cavalry". Crazy!?

Next are a couple of pictures of the "Gallant Little Belgium" table. I picked up the game background leaflet but it doesn't mention the name of the group/club presenting the game. 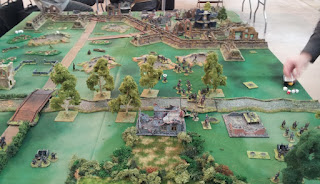 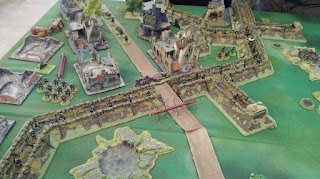 The idea was that a heavy artillery barrage has flattened much of a fortified village on the outskirts of Antwerp, where the brave Belgian defenders are trying to stop the German advance.

Here's a Very British Civil War table. No one was around when I passed so I'm not sure who presented the game, but it did look rather good. 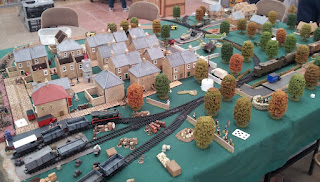 Finally, here's Rorke's Drift. Had a chat with these guys but alas I cannot recall the club name!! Nice table anyway. 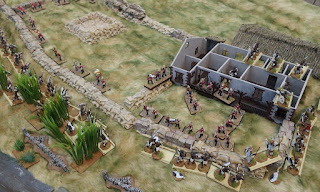 The show seemed well attended and had a fairly good range of traders, plus a busy set of tournament games. The venue was bright and airy, if a little chilly. However, given that it's usually a livestock market, the plentiful fresh air was essential! It definitely had a very agricultural aroma at the start.

A good show and a good fun day out.

River, Wattle Fence and other bits

Rivers are one of those tricky terrain features to get looking really good. The best method is, without doubt, to build terrain modules that allow the river to be carved in to the module, then use water effect solutions, potentially giving a very realistic result. However, terrain modules are expensive and take lots of room to store, etc, etc. So the only other option is 'place on the table' terrain. I made a river years ago using thin MDF, with polystyrene for the banks, but it was quite a bit of effort and it had occasional problems with the MDF curling, so I sold it. But now here's a marvellous, cost effective solution that didn't take much effort to complete. 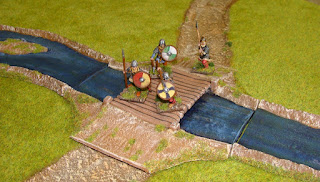 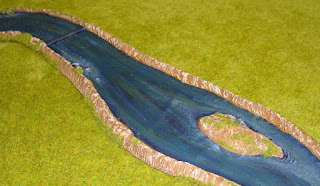 They're made of brown rubber so are very durable and flexible. They take paint and flock easily and come in sections either 10"-12" (25-30cm) long, or about 6" (15cm) for the bridge section. There is also a ford available. Plus they cost just £3 per section, less if you buy six.

Find them at Magnetic Displays, scroll down to "Burgh Terrain". Highly recommended.

Next, in previous posts I've shown scratch built wattle fencing using wire, string, etc, but here's what I found (actually my better half spotted it!) on the Renedra stand at Salute. 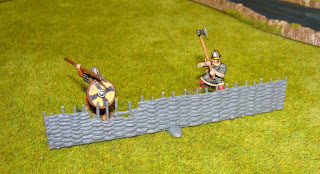 So new I haven't had time to paint it yet!

I think it was £10 for a pack of two sprues which is enough to make approx 5' (150cm) of fencing. I reckon this will be very popular with Dark Ages players.

Yesterday I spent the day at Legionary 2012, in Exeter. Held in a livestock auction arena - it certainly had plenty of "atmosphere"! Anyway, I was helping out on the Scarab War & Conquest demo table and it was a splendid day playing W&C with friends and talking to other gamers, but I'll post about that in more detail later this week. I did manage to find the time to wander around the traders and this item caught my eye. 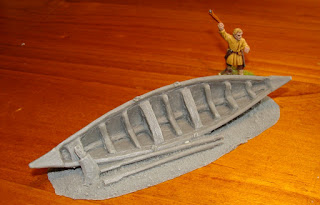 From Dreamholme Scenics, priced about £5. I've been thinking about how to make some new river/coast terrain for use with Saga so little features like this will add just the right 'ambience'.

Finally, whilst I haven't posted pics of many painted toys recently I can assure you I have been making steady progress with figures for Saga. I've nearly finished a Warlord, 4 Huscarls and 12 Levies for my Anglo-Danish warband, along with 12 Viking archers for my wife's warband. Just some highlighting left to finish them off. Here's a pic - I'll post in more detail when they're done. This will bring both Warbands to 8 or more points. 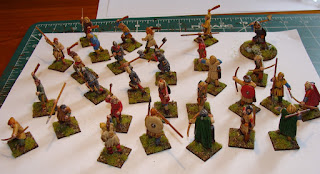