What better way to celebrate the launch of these splendid rules than by re-fighting one of the many battles that must have raged across Britain in the middle years of the 1st Century. Rome bringing the shining light of Empire to the fog shrouded shores of Britannia!

Rob suggested that I bring my Roman army along to the Bristol Big'Uns club at Iron Acton to tackle the rampaging Celtic horde of fellow WAC-er Dave. How could I refuse?

The plan was for Rob and I to join forces whilst Dave and yet another WAC-er, John, gathered the Britons for battle. But on the night, another chap (Mike) came along so Rob graciously agreed to GM the game. I should point out that War & Conquest does not require an umpire, but as with many wargames, having an umpire to ensure the smooth flow of the game, take pictures, make tea, laugh at poor dice rolling, etc, is a bonus.

Myself and Mike divided our forces approximately in half, whilst John acted in a more consultative role for Dave and his Celts. In fact we started referring to him as 'Druid John'.

To keep things straightforward we played a pitched battle but each side rolled to determine their battle objectives. The Celts got "A Test of Strength" - they had to hold off the Romans and get one battle formation (i.e. a formed unit) into the Roman deployment zone by the end of the game. Whereas the Roman objective was simply to crush the rebellious enemy forces and show them the true power of Rome by destroying 75% of the enemy forces (or at least reducing their battle formations to below 50%).

There are a variety of ways to deploy but after consulting the dice we settled for alternating units, with the Celts deploying some skirmishers first. 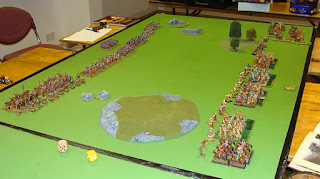 And from the other point of view. 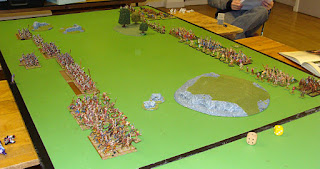 You can see that the Roman forces included some of the British tribes that understood the value of Roman friendship. ;o)

The start of Celt turn 2 and you can see that the Celts have opened the battle with attacks on the flanks, particularly with the chariots and cavalry, whilst the warbands let their skirmishers try to soften up the Legions. The Roman plan was to refuse the left flank and concentrate on attacking in the centre. The reserve cohort heads for the right flank in case their British allies prove to be less resolute than promised. 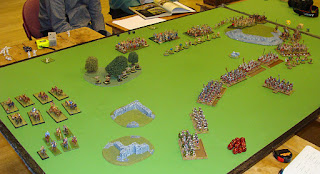 Again, from the other side of the table. 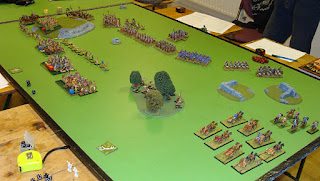 Mid-battle and the Romans press home their attack. However, the Roman left flank has not held too well. The Auxiliary archers were slaughtered after they broke ranks to take up a skirmishing position that was just within reach of the Celtic cavalry! The cavalry and accompanying skirmishers poured through the gap to hurl javelins at the rear of the Roman lines. 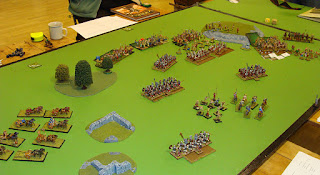 Once more, the view from the Celtic position. Please note that the blue and red dice you can see are simply temporary markers for Strategy Intervention points. Players could keep track on their lists or - and this is what I will be doing - they can make suitable markers. The rulebook offers a number of ideas of how these can be represented. 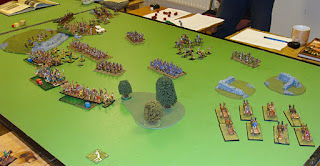 The next picture is to prove that Dave didn't roll all of his dice badly, though to be fair he did have a few fairly awful rolls. The tile with the Uffington White Horse was Dave's way of marking the point on his baseline where fleeing troops would head after the initial run away, i.e. a Rally point. More opportunities for creative modelling! 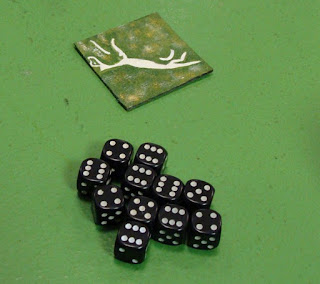 Here's the battle in about turn 5 (I think). The auxiliaries on the Roman left have held off a sustained attack by the chariots and the skirmishers. Although they took a quite a few casualties, Roman discipline (and the timely use of a Strategy Intervention point) kept them in the field. In the centre the legions are fighting stoically against the fierce British warbands. Legionary fighting skill trading off well against the warbands ferocity and superior numbers. However, the Warlord's noble retinue proved an exremely tough nut to crack, even when another cohort manoeuvred for a flank charge they kept their nerve to pass a morale test and thus avoid becoming disordered. The mystical power behind this tenacious display of barbarian fighting prowess soon became clear as Dave began muttering a series of strange words accompanied by arcane hand gestures. Clearly an aspiring Druid!? See for yourself. 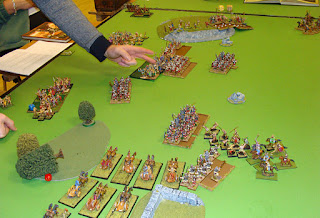 With the hour drawing late we played the final turn, despatched the most grievously wounded and counted our dead. The Celts had certainly given the Romans a good run for their denarii but had not been able to get a battle formation into the Roman deployment zone. However, whilst the legions had undoubtedly slaughtered a great many Celts they hadn't quite reached their objective. At least two of the warbands were still in reasonable fighting order.

So a draw it was then, but what a close run thing!

All played with superb sportmanship by both sides, several moments of high drama and a good few laughs. Many thanks to Rob for running a great game and thanks also to my ally, Mike, and my opponents Mystical Dave and Druid John.

What are you waiting for? Lead your armies to glorious victory with War & Conquest!

More painted models! I've really enjoyed painting these chaps. They'll either be used as a specific Signal Staff or they'll be added to the command groups, depending upon the scenario, army list, etc. Anyway, here they are. 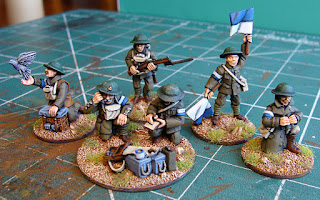 I've very much followed the examples in the rulebook(s) in terms of colours, i.e the blue and white bands and flags. 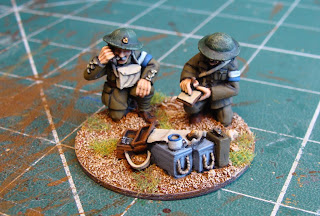 Here's the chaps on the field telephone. I particularly liked the (vitreous enamel) cup of tea! 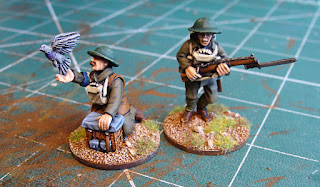 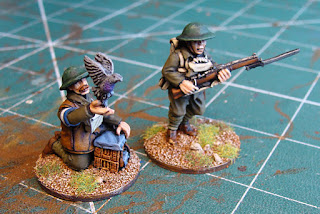 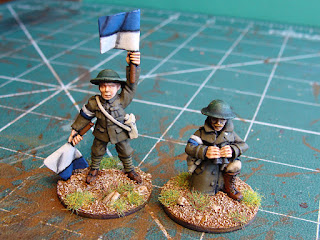 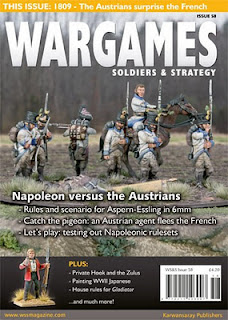 As you can see from the cover pic above, the theme of this issue is Napoleonics.

OK, so it's not my favourite Napoleonic era, i.e. the Peninsular war, but it's all still very interesting stuff, with lots of lovely pictures to admire and inspire. It's not all about 'Boney' though. Details of the contents can be found here. This is rapidly becoming my favourite wargaming magazine.

I'd really like Guy and team to do a Great War themed issue - preferrably 1917-18. Perhaps I should write an article? Hmmm ... maybe not ... publishing has strict deadlines. As Douglas Adams said - "I love deadlines. I like the whooshing sound as they fly by".
Just ask my boss! ;o)

Get your copy now!