Here's the latest addition to my BEF army for The Great War.

This means that my support weapon tally is now two HMGs and a mortar.
Painted and based as described previously on the blog.

Club Game of The Great War

I've been thinking of going along to the Bristol Big'Uns club for a while now. They're based in Iron Acton (35 miles away) so it's not exactly local for me. Club night is Sunday evening which usually consists of a quiet evening in front of the telly - or pehaps a bit of painting. Hence the lack of attendance so far.

But with the Summer hols now a distant memory I met up with fellow Great War-gamer Dave (aka "Orange Dave" on the Scarab forum) for a game of TGW using the new Over The Top supplement rules.

Now Dave has a pretty impressive collection of WW1 British figures whereas mine is somewhat more modest, so we decided to play the Storm the Hill scenario from the main rulebook using the OTT 1917 lists plus the rules for supporting artillery barrages, etc. As we both had British forces the "battle" would be a training exercise. Which is fine as all the main protagonists of WW1 made good use of such training before many of the big attacks. Dave drew up an ANZAC list and I used the British list.

All pics are clickable. 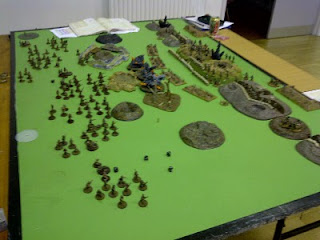 The battle ... ahem - "training exercise" ... has begun. The British are dug in on the hill and in the nearby trenches whilst the ANZACs begin their advance across a blasted no man's land of craters, woods and barbed wire. 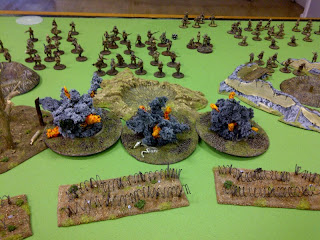 Dave's excellent barrage markers - note the dead horse! Each turn these move forward a set distance - though we both agreed that a slightly random advance would make things more exciting. 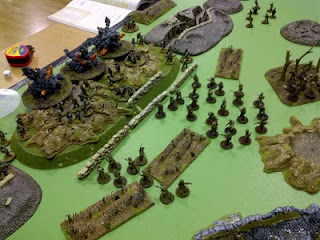 The ANZACs begin to close on the hill using the creeping barrage as cover (no shooting permitted through the blasts). During the "training exercise" I was able to get my Battalion Command, aided by the Signal Staff, to successfully call in a couple of barrages. These hit the ANZACs on my right quite hard and certainly held up their advance for some time.


In the final turn the ANZACs made it on to the hill and dealt with the last few defenders to claim a hard fought victory.

Barrages - for both sides these worked really well in that the rules added a bit of extra atmosphere without unbalancing or dominating the game in any way. Having custom made markers really helped too.

So, a great game against an excellent opponent with nice terrain and figures. Add in a good venue and a warm welcome from existing club members. This is what wargaming is about.
Posted by Matt at 18:38 3 comments:

Now that I've a chance to have an initial read through of most of the rules I thought it about time to say a few words... I'm not going to give away any particular details of how the rules work as I think that might spoil the enjoyment of others (not to mention being an issue of copyright, etc).

As I mentioned in an earlier post I was a little surprised at paying £50 for a softback rulebook, 4 game boards, 16 dice and a figure. However, I can assure readers that I think it will be money well spent.

The rulebook is gorgeously produced, full colour throughout, with plenty of pics of Dark Age types going at it hammer and tongs. The rules are described in a clear, easy to read manner with many good examples of play illustrating the mechanisms. After one read through I think most people will have a good idea how to play. I've heard others say that the rules are easy to pick up but will prove challenging to master and I would agree.

The dice are used to determine what your units can do each turn, either to move, shoot or fight, or to make use of special abilities. These abilities vary from one 'faction' to another. Faction is another way of saying warband or army. You almost certainly won't be able to everything you want each turn so you'll need to think carefully about how you activate units. Having some sort of plan or strategy will help enormously I imagine!?

Another word or two about the dice ... you can play the game using ordinary D6 as the rules include a conversion chart but I feel it would be a bit like playing the game with unpainted miniatures. It would work but you'd be missing out on some of the atmosphere. They're not cheap but I'd recommend getting them.

One nice feature of the rules is that distances are a series of fixed lengths (the book includes photocopiable measuring counters) that each have a name. This means that the old chestnut of imperial versus metric measuring is very neatly dealt with.

The game is very much scenario driven and rules include a number of ready to run scenarios. But I reckon most mature gamers would have little bother devising their own scenarios from historical sources, books, films, other games, etc.

To start playing you'll need two sides comprising of around 25 figures each. Even I can manage to paint that many figures. Standard table size is 4' x 3' (1.2m  x 0.9m) so you won't need too much scenery. If you can get your hands on a few thatched buildings that would be even better.

Furthermore, the rules could easily be extended by enterprising players to cover other eras such as the Arthurian age. In fact I believe I read somewhere that GB are thinking of doing exactly that. I certainly hope so.

So, in summary, they're a great looking set of rules that I think will provide many hours of splendid wargaming fun. Highly recommended indeed!
Posted by Matt at 13:14 3 comments:

Adventures in the Dark Ages 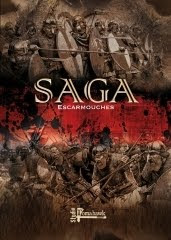 Along with two sets of Saga dice (Viking and Anglo-Danish) and the limited edition Sven Forkbeard figure.

However, my initial reaction was slightly "oh, is that it?". I paid £50 for a 75 page softback rule book, 4 cardboard army rosters, 2 sets of 8 dice and a metal Viking warlord figure. Hmmm. So I hope the game proves to be as good as all the hype.

I haven't had time to read it yet - only a quick flick through - but the production quality does look high with lots of full colour photos, graphics, etc.
Posted by Matt at 11:30 6 comments:

Trees for The Great War

There are many pictures from the Great War that show once leafy woodlands reduced to blasted tree stumps surrounded by mud, so with that image in mind I set about making some for the gaming table. Rather than steam ahead and make lots I thought I'd make a test piece to see if the finished result looked good enough.

The stumps are made from bits of an old shrub I found in the garden. It was so tough I had to break the stems with pliers! I sawed some of the ends so as to give a good bond with the base. The base is simply a piece of 3mm MDF liberally covered in filler. Later it was covered in a mix of sand and grit.

The base was painted in Vallejo Leather Brown and then liberally dry-brushed with Flat Earth. Then I added a couple of highlights with a light brown and a cream colour. After that came a light garnish of static grass and a few pieces of scenic foliage.

Here's a few of my BEF making their way across no man's land.

Now I need to get on and make another two or three sections. Also, more painted figures soon.
Posted by Matt at 18:35 8 comments: