Or possibly "Wargaming BBC Gardeners' World" ... there are a plethora of not-very-funny options! But first, for my non-UK based visitors I should explain the BBC Gardeners' World is a weekly gardening TV magazine programme from the BBC, from Spring to Autumn, about all things gardening. I must confess that I do occasionally watch this programme.

I've wanted to build some fields/garden for a while. The original plan had simply been to build a few ploughed fields but the modeller in me took over so now I have a couple of what are more like gardens, plus a small ploughed field. Here's some pics. 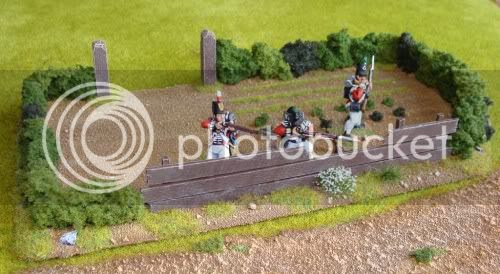 (click for a larger image)
I prefer scenery to be usable for a variety of historical periods, so here's some redcoats (L-R Perry's plastic and two Front Rank) defending a field of produce from Boney's horde. 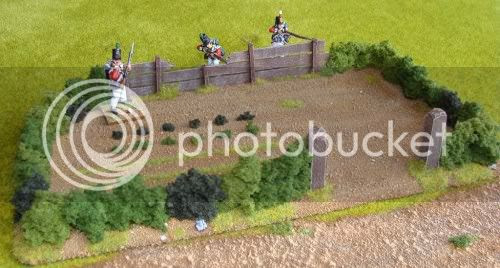 (click for a larger image)
From the other side of the fence. (Wood courtesy of your favourite coffe shop) 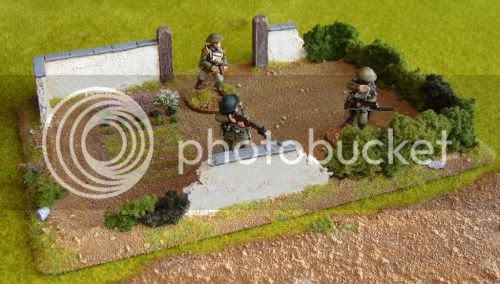 (click for a larger image)
This definitely more of a garden, so perhaps the leaning towards the Great War is understandable. The Hun certainly aren't going to get at these potatoes and carrots without a fight! 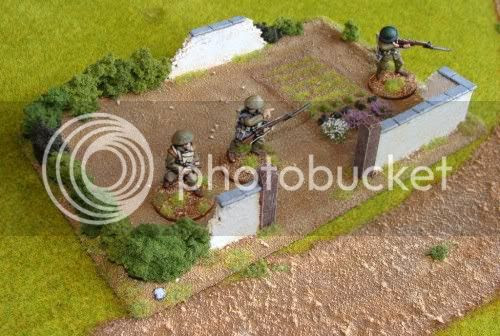 (click for a larger image)
The same garden from a different angle. 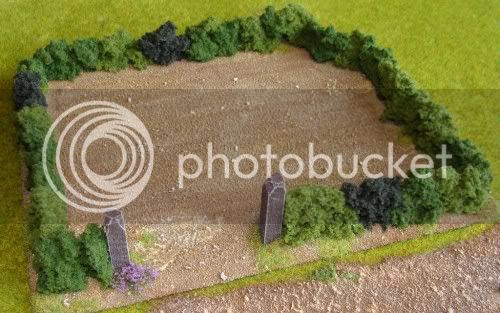 (click for a larger image)
This meant to be a ploughed field but in this shot it's very difficult to see the plough lines. 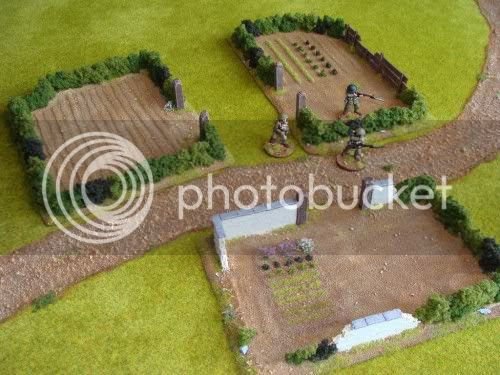 Hopefully this pic puts things in context. I had planned to do a step-by-step for these but simply forgot. However, they started as plain pieces of 3mm MDF with chamfered sides. The edges and ploughed ridges were built up using cheap filler and the whole lot was covered in PVA and fine sand. Painting is Vallejo Flat Earth followed by a number of very light browns and cream. The ruined wall is 3mm foamcore with plasticard tiles on top. The gate posts are simply 5x5mm balsa. Wooden fencing supplied by a well known coffee company. The hedges and other plants are mostly Woodland Scenics foliage. Then I've added some Mini-natur plants

Now ... where can I find a 28mm figure of Alan Titchmarsh wielding an AK47?

The bases have arrived (from Warbases - highly recommended) and I've started on the first warband. Ostensibly this is a 32 figure warband but by jumbling the rear ranks slightly and adding a GB hound figure I've only used 29 Celt figures. I've tried to make the front ranks from the better equipped "noble" warriors, whilst warriors of lesser status (or perhaps less enthusiasm?) comprise the rear ranks. 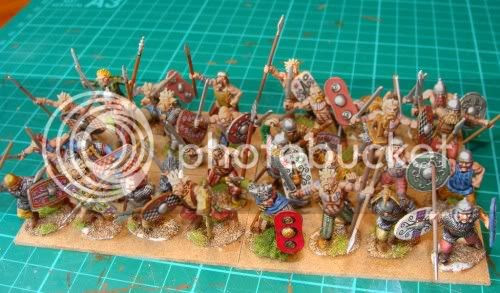 Haven't added the sand and paint yet as I'm considering a slightly different basing colour using mainly Vallejo paints rather than GW as the Vallejo offering is cheaper and easier to get hold of. 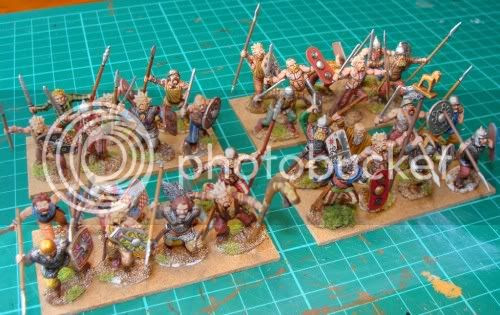 Here's a shot with the stands spread out slightly so you see more clearly how they're ranked up.

This evening I've been getting my Celt army out ready for a few games this weekend. However, it's taken me more than an hour to get them all ranked up on movement trays. Aaaah!?

As you probably know by now the army was based for Warhammer Ancient Battles so all the figures are on individual 20mm x 20mm bases. If you look back on the blog you'll notice that the bulk of the army is composed from Warlord Games plastic Celts. Very reasonably priced figures but quite a few have rather odd "chicken wing" poses which makes the a right pain to rank up nicely - and that's putting it mildy. I've always found them rather fiddly to arrange but this evening took the biscuit. Also, you only need to just clip a figure and the magic of plastic will ensure that several go flying and your painstakingly arranged ranks are thrown in to disorder.

The problems are (a) if I ever wanted to play a quick game then it would probably take me longer to get the army ready for battle than to actually play! and (b) the thought of getting the army out of the carry cases and the hassle of organising them for battle is almost off-putting.

Historical Celt leaders probably had less bother rounding up the lads for a ruck with the Romans ... well OK, maybe not, but you get the idea.

All this has led me to think that I need to gradually replace the awkward figures for more sensibly posed lead (thinking GB), and come up with a scheme for multi-basing the figures. I'd also look to remove some of the better posed figures from their individual bases and re-base (!?) them en-masse.

A warband of 32 figures on 4 bases of 8 x 4 figures, i.e. 80mm x 40mm, would be so much quicker to get ready for a game. Plus it gives an opportunity to make the bases look a little more scenic.

I'd have to think a little about how I based "command figures" to ensure they were approx front and centre. I like the idea of the front ranks of the warband being the better armed and equipped troops anyway so this shouldn't be difficult either. Also, basing figures in blocks would allow me to make the formations a little more disorganised.

Some of the blogs I follow (Saxon Dog being a prime example) multi-base most of their figures and I must say that the result is very good - though Dave's splendid painting helps too! BigRedBat's blog is another excellent example.

Casualty removal would take a little planning but it's not an insurmountable problem. Plus not all games systems require removal of figures anyway. Certainly need to have think about what to do as I'm just not happy with my Celt army the way it is. Some of the painting is a bit dodgy too. I know it was dipped but some of the figures are dreadful, plus some of the early figures were ruined by the horrible Army Painter varnish going cloudy. It was all rather rushed. I'm certainly not going to re-start the army from scratch but it definitely needs an overhaul.
Posted by Matt at 22:09 6 comments:

I'm continuing to make some progress with my BEF. Here's a few pics of the latest batch. Quite pleased, especially given the ongoing problem with my hands. Not based yet as I tend to do that for larger batches of figures. 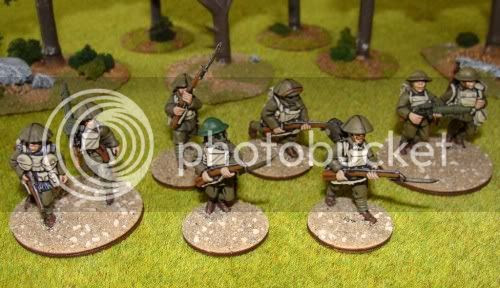 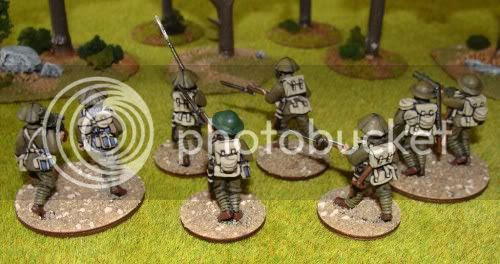 A close up - although the flash has rather washed out the highlights. 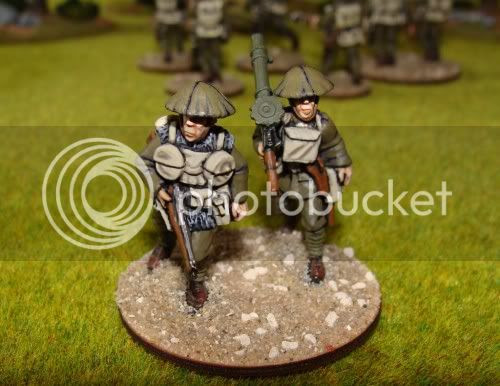