June has been quite a hectic month, so that and the continuing problem with my hands, have meant that recent progress has been slow. However, I have managed to finish some more barbed wire sections. This time I've made the wire a bit darker and added lots of GW Chestnut Wash to give a rusty appearance.

I've also made some progress with the next batch of the BEF.

The miniature Eiffel Tower is there to remind them of the of the fun they can expect when not in the lines!? Anyway, when these are done I have a Vickers HMG team, two more platoons and a tank to paint for an approx 1,000pt battalion. Must keep at it!
Posted by Matt at 11:40 6 comments: 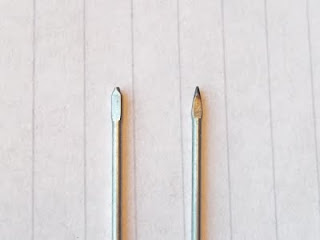 Most of the spears were like the one on the left!

I've emailed Perry Miniatures several times in the last month but to no avail. No reply what-so-ever. I'm aware that they are akin to gaming royalty but that's no excuse for poor quality goods and rubbish customer service.

I hope this is just a temporary glitch. I shall keep on sending them polite emails, or failing that, see them at the next show I attend.
Posted by Matt at 19:36 7 comments:

Scarab Miniatures supremo, Rob Broom, was kind enough to spend much of last Wednesday at my house in order to give me a demo game of his forthcoming War & Conquest rules. In the best tradition of Ancients rulesets we decided to play Early Imperial Romans vs British Celts, which is handy as I have (most of) an army for both sides! Rob brought along a few reinforcements for both sides kindly supplied by Scarab chum, and all-round gaming cognoscenti, Phil Turner. Rob also brought along an enormous box of biscuits thus ensuring he won high favour with the ladies in my household :o)

Now, I'm not going to go into much detail about how the rules work. That's for Rob to discuss as and when he's ready. In fact, I think the next issues of WSS and WI are to include articles that expand on these and other rulesets. But if you meet Rob at an event I'm sure he'd be happy to give you a quick tour of the main rules ideas.

Rob likes to point out that whilst playing War & Conquest will give you an improved gaming experience, it will not improve your dice rolling! Oh how right he was. It seemed like my Legionaries were wearing tin-foil rather than lorica segmentata! And may be a few had only thought to bring along the their weighted, wooden practice weapons. Such are the way of the dice.

In order to keep things fairly straightforward I laid out the table with plenty of open space and we played the game as a good old fashioned pitched battle. One thing was clear from the start; the Romans were heavily outnumbered!

Here are some shots of the game as it progressed. I had planned to take more regular photos but we got engrossed in the game - which can only be a good thing. By the way, the table was in my garage which due to the flourescent tube lighting isn't exactly an ideal spot for taking good photos, but I hope you enjoy them anyway.

(click for a larger image)
The Celts have made their first advance towards the Roman line.

(click for a larger image)
From the Celt point of view. Note the chariots rapidly heading for the other end of the line!

(click for a larger image)
The Romans have advanced in to what the glorious leader believes to be a better position. Just don't mention the Auxiliary cavalry on the right flank retreating... er ... I mean leading the pesky skirmishers into a carefully planned ambush. Yes, that's it! An ambush.

(click for a larger image)
There do seem to be rather a lot of Celts!

(click for a larger image)
Welcome to a nice view of the Roman left flank. Soon to be a scene of utter carnage.

(click for a larger image)
A view along the lines. Those cavalry are still leading those foolish skirmishers to their doom.

(click for a larger image)
Celt Nobles and Warriors giving the Auxilia and Legions a very warm welcome to Britannia.

(click for a larger image)
The Celts get stuck in all along the line.

(click for a larger image)
The battle rages across the field!

However, by the end of turn 4 (or it may have been turn 5) the Celts were on the verge of an epic slaughter of their Roman foes and we almost stopped there. Even the veteran Legionaries barely put a fight before being slaughtered in a terrible rout. But then we decided to give Rome one more turn, and to my absolute delight the Romans started to fight back, but it was too little too late. Though a small amount of honour was restored as the Legions destroyed the Celt Warlord and his warband. With daylight fading to night across the battlefield, the Legions fought their way clear and the Celts had won a decisive victory.

OK, the Romans didn't exactly fight their hardest, but to be honest as their commander I must accept that (a) my deployment was less than imaginative, and (b) I played a bit too cautiously which rather let the Celts dictate the battle. After deployment I realised that the hill in my centre was held only by an under-strength cohort of Auxiliary Archers. Also, I deployed with insufficient room to allow my units to manoeuvre properly - it became clear in the game that getting control of the flanks will be a key part of winning battles.

Particular Likes
The turn sequence. It's not the traditional "I-go-you-go" sequence and this makes for a more fluid and less predictable battle. You really have to think a turn or two ahead, not just about what you're planning to do but what your opponent might be up to. Clearly this is something I need to get a lot better at!
The mechanism whereby commanders have points to use in order to improve the odds of passing command and morale tests. You start with a set amount and (re)gain some during the game. Early in the game you have plenty but when the lines meet and the action gets decisive there's never enough!
Skirmishers - just about effective enough to include and they can be used just how I imagine real skirmishing forces were used by our historical counterparts.
There's more but I do not want to give away any specific rules.

The game progressed at a fairly leisurely rate but this was not due to the rules in any way, rather it was because (a) we kept getting distracted and talking about other gaming/family stuff and (b) in my excitement I kept asking lots and lots of questions about other aspects of the rules, army lists, supplements, etc, rather than focussing on whatever we were doing on the table at the time!?

One thing I found quite odd was that after almost 25 years of playing mainly Warhammer type games, it was really hard to let go of the Warhammer "baggage" ... using the WAB terms for things, lapsing back into the WAB turn sequence, WAB manoeuvres and distances, etc. It shows just how ingrained rules can become! So I'm really looking forward to playing more of something new.

What was obvious (and Rob said so, so it must be true!) was that I NEED a larger table. My 6'x4' was groaning under the strain of almost 5,000 WAB points of soldiers. For a game of this size you really need an 8'x4'. But there's no reason why you couldn't play a smaller game on a 6'x4' table quite satisfactorily.

These rules look very promising and they've really given me a good wargaming buzz. I really must get on and finish both my Celts and Early Imperial Romans. Then there's all the command vignettes, casualty and other markers, etc. Perhaps Rob will let me help out with the creation and play-testing of Roman army lists ... bwah-hah-hah-haaah!?