Finally went to a show!

Crumbs! I've actually made it along to a show at last. The first for a number of years; and very enjoyable it was too. Alas, I forgot to take any pictures - doh!?

Saturday 29th January saw the Penarth Leisure Centre near Cardiff play host to Crusade 2011, run by the Penarth & District Wargames Society. It was really good to soak up a bit of hobby atmosphere and have a chat with traders, etc.

There was a small number of demo games which generally looked quite good but my favourite demo game was the WW1 game put on by Rob of Scarab Miniatures - no suprise with that choice!

I bought a number of items for my EIR and Napoleonic projects :-

Perry Miniatures Napoleonic Officers BH2 (Wellington, Picton and Uxbridge) and BH3(Major Generals Pack, Kempt and Halkett).
A box of Perry's French Napoleonic Line Infantry.
Four packs of EIR LBMS transfers from Gripping Beast.
A new set of dice - made from the finest pink (yes, pink) plastic.
A pack of large round bases from Warbases. Very good too.
Samples of new product called Flexifield from HedgerowScenics (website under construction). Well worth checking out if you want to build some realistic looking fields.
A set of resin ruined pillars from The Square.
Plus some paints, brushes, static grass etc.

I was quite impressed with the range of companies and there certainly seemed to be quite a brisk trade going on. I'd also like to mention Heroes of the Dark Ages as their range of Saxon and Viking figures looked quite promising.

Having loaded up with goodies we headed across to see Rob's WW1 demo. It was great to have a natter about all things gaming and the end result was an invite to come along to the next Great War gaming day on 6th March in Nottingham. Checking with the CEO it seems that it is practical after all! Hooray! However, I'll really need to get my brushes flying as it's just 5 weeks away and I barely have half my army painted. In fact I still need to order some figures. Yikes!

Anyway, after a splendid couple of hours at the show we all headed for Cardiff Castle. Well worth a visit but I'd recommend going in warmer weather. We were absolutely frozen by the end of the day!
Posted by Matt at 12:59 No comments:

I've just added another blog to my list "Je Lay Emprins". Well worth a look if anything medieval tickles your fancy.

At last ... some more painting!

I'm so excited that I've actually painted something that, even in their not-quite-finished state, here's a few pics of more Auxilia.

All Black Tree Designs Auxilia. Shields and bases to follow.

Now for some close ups... gulp! 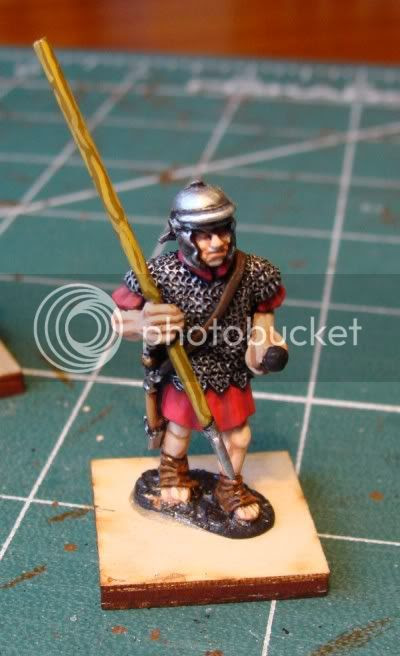 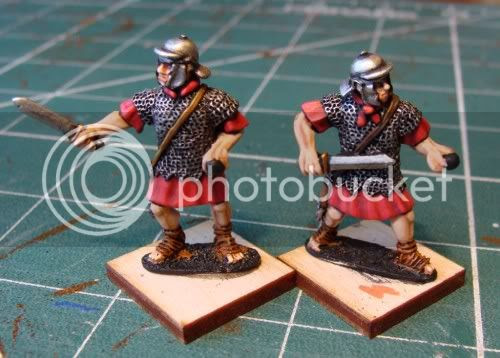 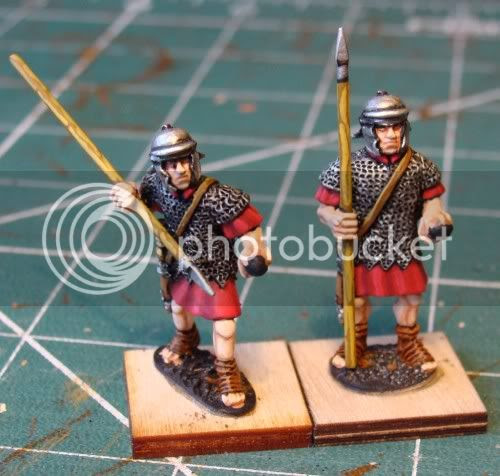 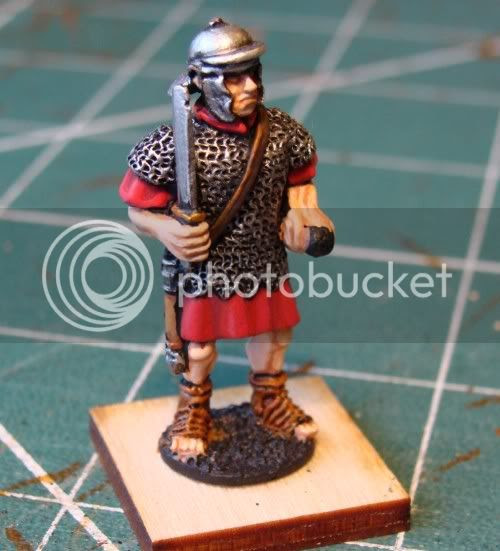 Hopefully I'll be able to pick the pace of painting soon. I certainly need to as I've just received another 60 Legionaries!! Purchased at a very reasonable rate from BigRedBat - splendid fellow - see his blog link on the right. Well worth looking at.

What a mixed year 2010 was in terms of gaming efforts. So in the year ahead it’s imperative that I make an effort to get some gaming projects completed, or at least completed to the point where I can play a few reasonable sized games with some variety. This includes...

Early Imperial Romans
These are most definitely my favourite army. I have around 1,800 points (for WAB) but this includes two cohorts of 18 dipped plastic Warlord figures. Whilst these figures look fine they are not quite compatible with my existing cohorts of more conventionally painted Black Tree legionaries. To get this army to a more satisfactory 2,000 – 2,250 points I need to replace the plastic legions, add another 8 or so Auxilia, plus add a unit of 9-10 Auxilia cavalry. I might even add a few more legion to boost the 18’s to 24’s. That’s about 50-55 figures.

Celts
This army is a similar size to the Romans and is mostly made up of dipped Warlord plastic Celts. I’m quite pleased with how this army looks and all it really needs are some extra warriors / fanatics, another unit of cavalry and maybe some skirmishers to reach a comfortable 2,000 points. To give more figure variety I’ll probably add a couple of Gripping Beast Celt war band deals. Approximately 45-50 figures.

Battlefields & Scenery
However, expanding these armies presents the ‘challenge’ of battlefield size. I currently have a 6’ x 4’ but the new WAB v2 rules really need an 8’ x 4’ table if playing 2,000 points. A recent 1,800 point game on the 6’ x 4’ showed that there was just not quite enough room for armies to manoeuvre satisfactorily. When you read about my next wargaming project you’ll see why it’s even more important that I find a bigger table.

Napoleonics
I made a surprisingly energetic start to this project and now have almost the first brigade completed. It requires a few more redcoats and a couple of officers. However, this project definitely falls in to the category of ‘longer term’ as each army (British & French) will need 200+ figures to give what I would consider satisfactory games. So still quite a long way to go. But I do aim to make some good progress this year. Every time I pick up my copy of the excellent ‘Black Powder’ I think to myself that I really need to play this era and ruleset!

As for scenery, I need to make a few items that impart some ancient British flavour, such as a small Celtic farmstead or a Roman watch tower. Trees, hills, etc are all very well but a good game requires a few items to set the scene properly.

The Great War
I have enough figures for almost 700 points but barely half of these are painted. My aim is to collect a BEF Battalion (approx. 95-100 figures) so that I can attend some events. That’s about 55-60 figures to go.

Romano-Brits and Saxons & Vikings
These three armies are almost definitely going to be deferred for some time. I simply do not have enough time / money / energy to even think about collecting and painting more of these figures.