Rather than go around in circles trying to decide what to do next I thought I'd finish off something I started a while back... three celt chariots. So here are a few pics.

As with all my other Celts these are mostly block colours followed by Army Painter dip (Strong Tone). 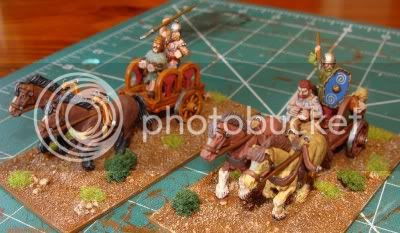 The armour and flesh are given two coats - a base and a quick highlight. 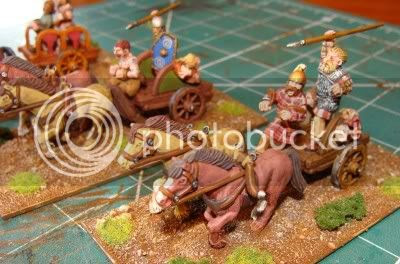 These are GB's splendid Celt Chariots, which look fine alongside my three Warlord chariots. 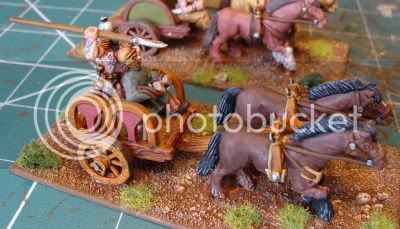 I may order one further chariot from either Warlord or GB to act as a chieftain for the unit. A unit of seven including a character should be more than capable of holding their own on the battlefield. 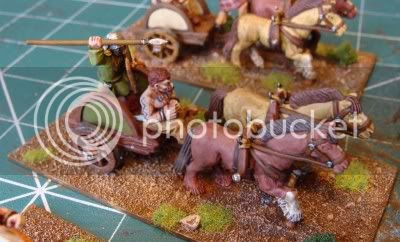 For this figure I just had to mount the driver standing on the yoke pole! 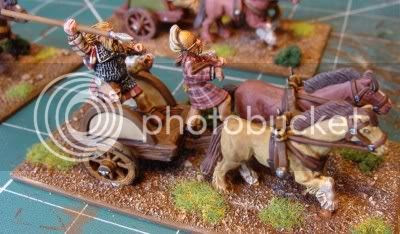 Wargaming confusion reigns... I've just returned from a one week holiday on Hadrian's Wall and it's been absolutely brilliant! However, it's put me in to something of a spin. Before the hols I was just starting on my Age of Arthur / Dark Ages project with Saxons and Vikings, but even so my attention was being drawn towards my partially complete WW1 BEF force. So much so that I even took some BEF on hols to paint - though there was too little spare time to wield a brush!? Now I return from hols full of inspiration for Rome and the conquest of the British Tribes.

Oh, what is a chap to do next?

I'd really like to get my WW1 BEF in some sort of battle ready order, particularly as Rob at Scarab is looking at producing his own WW1 rules and I'd really like to be involved with that. Yet, I'm drawn back to all things Roman and Celtic. But the newly started AoA project demands my attention too.

I intend to take a day or two "off" to let things settle before I decide which way to go.

Also, I hope to publish a series of short articles on the blog about the Roman sites I've recently visited.