Look what I was gifted recently ... Oh help! 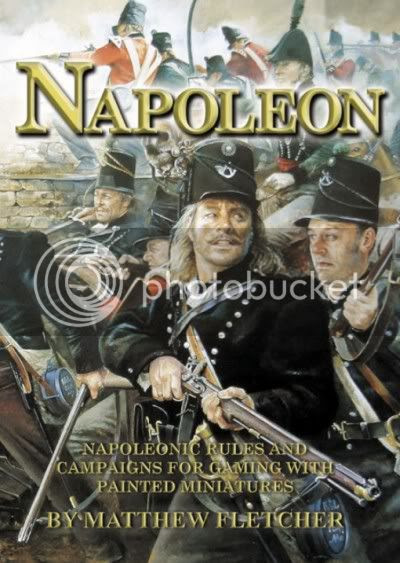 Do you flutter from one era to another? Or are you sturdy enough to keep your interests focussed in one area? Like many wargamers I can be something of a butterfly when it comes to gaming/painting/reading, flitting from one era to another sometimes quite rapidly. So I thought I'd record my "fluctuations" on a semi regular basis (this is no 1) for your entertainment. I've given the matter careful thought and the top 5 currently look something like this...

1 British Celts
Having recently completed the first 1,000pts I'm jolly keen to expand the army further. The dip method makes this fairly straightforward so progress should be swift. Only need another unit of 24-30 warriors and 3 chariots to make it around 1,500pts. The first 10 warriors are done and the next 10 are on the painting table. I recently had a big session of preparation and undercoating so there's plenty to paint.

2 Early Imperial Romans
Ever since WAB was first released in the late 90's I've wanted to collect EIR, so Rome has always ranked highly ... (no Monty Python jokes please ;o))

3 Napoleonics - Peninsular French/British
The first historical army I purchased en-masse was Naps French, with a Foundry army deal back in '99 ... then I sold most of it unopened a year later! Recently I've been listening to "Sharpe's Rifles" whilst painting so naturally I want another army!?
Posted by Matt at 00:23 No comments:

In my opinion a great wargame needs good scenery. With that in mind I've been gradually building a collection of ... er ... buildings. Many of them were built some years ago when I played mostly WFB, hence they have a slightly Empire-esque style. They proved especially useful when we developed our "Warhammer Ahoy" (link) game.

The buildings are scratch-built from foam core, card and balsa, along with a selection of extra bits and bobs. A number were inspired by the drawings in the original Warhammer Fantasy Roleplay source book.

I've added a few handy figures (mostly Foundry and Front Rank Napoleonics) to give a clearer idea of scale. 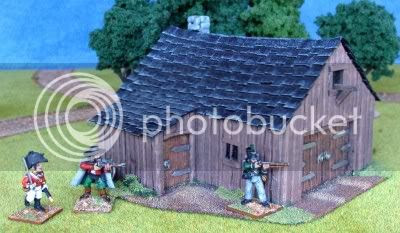 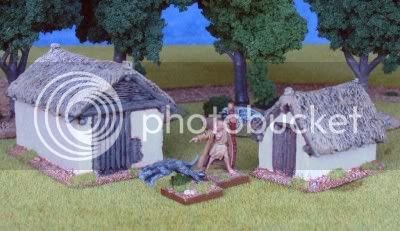 Some sort of yard 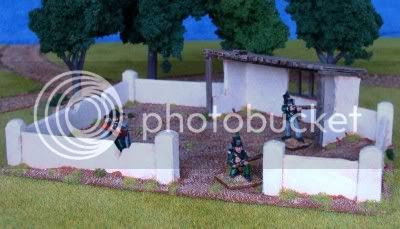 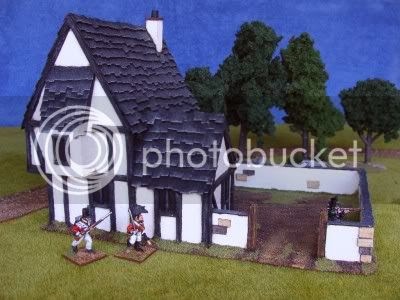 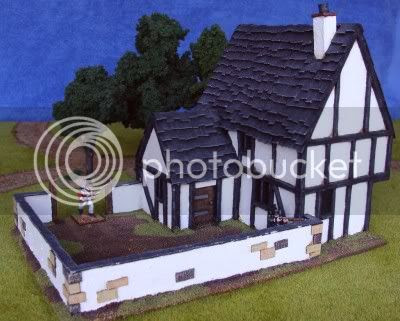 The Coaching Inn - just don't ask how long this took to make - but I really enjoyed it. The pattern behind the windows were made using car repair mesh. Plus there's more than 1,000 individual roof tiles. 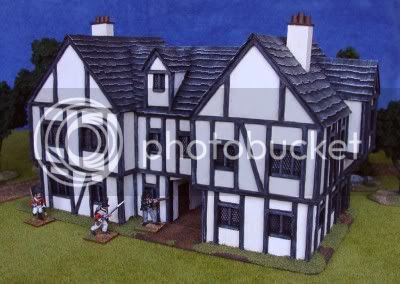 Another shot - note the officer in arch under the inn. 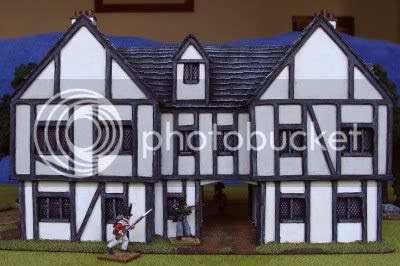 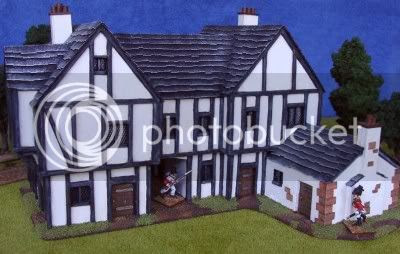 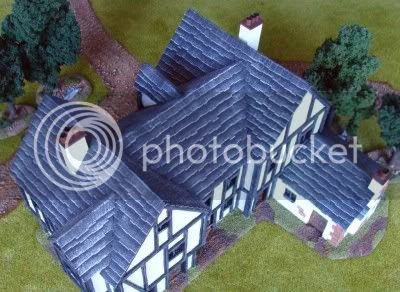 This became known (perhaps unfairly) as the 'Water Tower'. Definitely a fantasy piece. 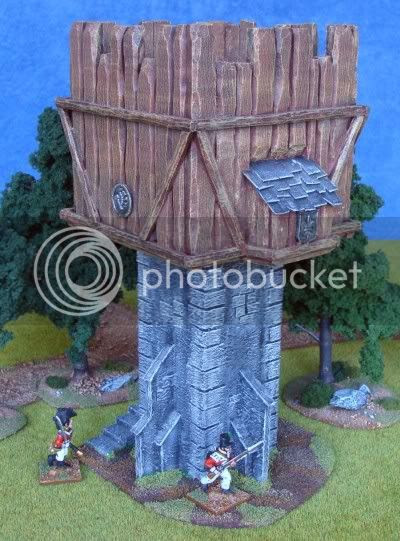 More recently I've added a Peninsular style building or two - certainly gives my small collection of British and French something to fight over. 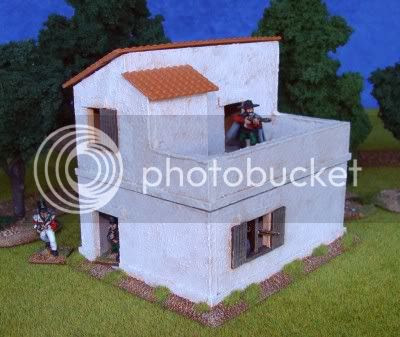 The other end. The roof and upper storey lift off to allow models to be placed within the building. This is how I shall be doing all future buildings as it makes the scenery much more interactive. 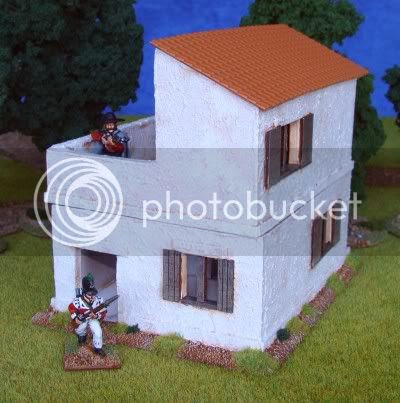 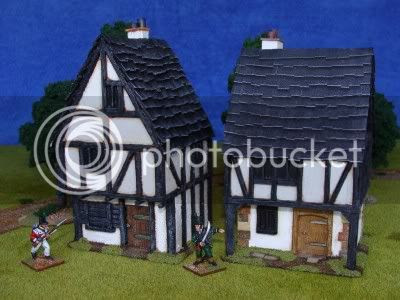 Another inn in the same style. 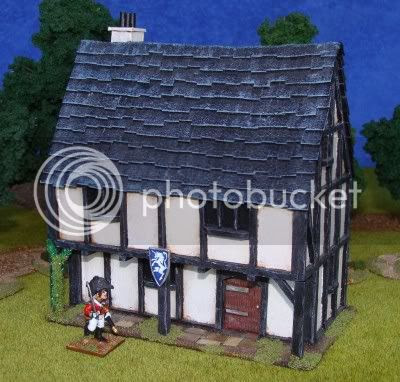 This where it all began ... GW's White Dwarf did an article years ago (issue 127 perhaps) about building your own scenery. In fact, I still have the article somwhere! This was the first building I made. 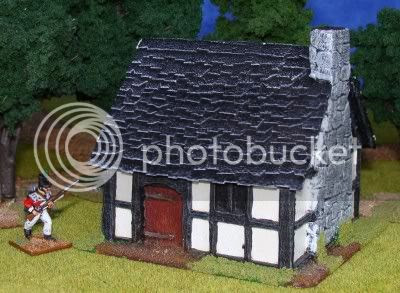 I'd thoroughly reccomend having a go at making your own buildings and other scenery. If you can paint models then you can make scenery, no problem. Additionally, you'll have a totally unique item built exactly as you want.
Posted by Matt at 20:16 No comments:

What better way to celebrate the completion of 1,000pts of British Celts than by having a battle against 1,000pts of invading Romans.

Yes, it's taken a bit longer than planned but the first stage of my Celt horde is now complete. In truth, the amount of painting time wasn't that much, probably about 3 months thanks to the dip method. But an almost 3 month break from painting during the summer rather delayed things. The figures are mostly Warlord, with a sprinkling of Gripping Beast, Black Tree and Foundry. Regular readers (with good memories) may notice from the photos that the hounds have switched sides. Whilst they were in my initial 1,000pt EIR army as a Barbarian support unit, I decided that they weren't very Roman so replaced them with some Gallic Celt skirimishers and a Scorpio.

The Celt army is slightly more than 1,000pts but I had a few extra painted models and wasn't going to leave them off the table!

I haven't played WAB for more than year so getting things ready for this game was both exciting and slightly daunting in a way. How do the rules work? What is my plan? ... What is a 'plan' anyway? The best thing was to just get on with it! Here's a few pics, not quite turn by turn but near enough.

Here's a few shots of the armies. The Romans. 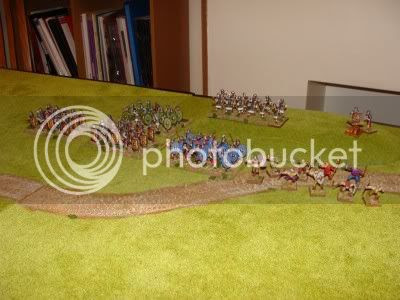 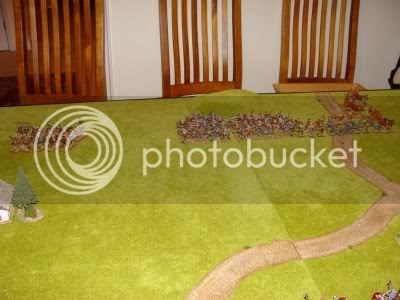 The Celt infantry and chariots. 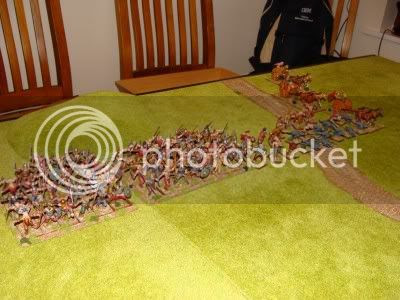 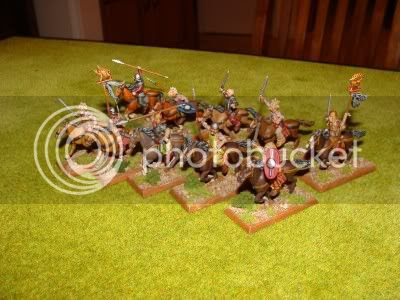 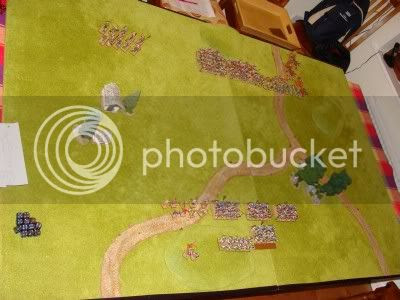 The Roman plan was to anchor one flank against the wood and use the Auxiliaries to hold the other flank whilst the Legionaries got on with the business of slaughtering Celts. We used secret maps for deployment - my favourite method - so I kept one unit of Auxiliaries behind the centre since I knew the Celts would try to outflank me. The Celt plan was to use the Cavalry, Chariots and Hounds to attack the Roman flanks whilst the Celt warbands overwhelmed the Legions.

One unit of Auxiliaries moved to the right in order to hold the flanking chariots and dogs. The Legions and moved forward whilst the skirmishers and left-most of Auxiliaries edged forward a little, whilst the Gallic skirmishers went further forward in order to tempt the smaller warband in to a charge later. The Celt slingers proved quite handy by inflicting a small number of casualties on the Legions, not many but enough to remove a rank bonus! 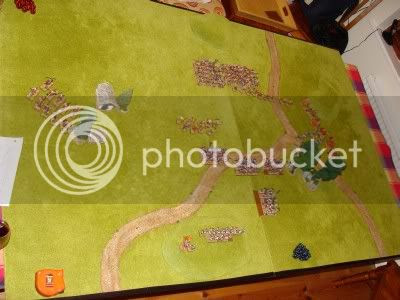 The Armies moved closer and the smaller warband did indeed roll a '1' for it's warband test. The skirmishers fled leaving the unit just within charge range of the Auxiliaries. I should have waited for support but instead I threw them at the Celts. Alas the Celts proved too much and the beaten Auxiliaries fled and were destroyed. The archers and scorpio proved fairly useless but I hoped that would improve as the enemy came closer. 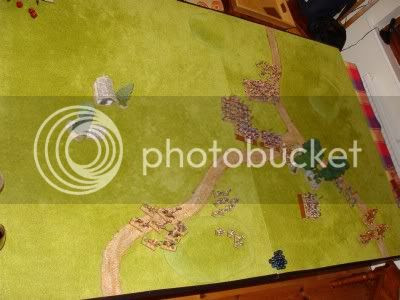 With the Auxiliaries fleeing, the smaller Celt warband pursued in to a unit of Legionaries and subsequently the other Legionary unit piled in on the flank and wiped out the Celts. The Celt flanking forces continued their envelopment, though the other unit of Auxiliaries held firm against the Chariots and Hounds. 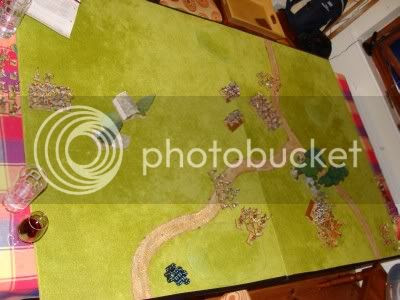 The Legionaries manoeuvred to get a clear charge at the larger warband. The nearer unit received the charge and held, whilst the other prepared to charge in next. The Scorpio crew were slaughtered by the Light Cavalry, but the Auxiliary Archers managed to shoot a few. The Chariots and Hounds continue to fight the other Auxiliaries but once again they remain steady. 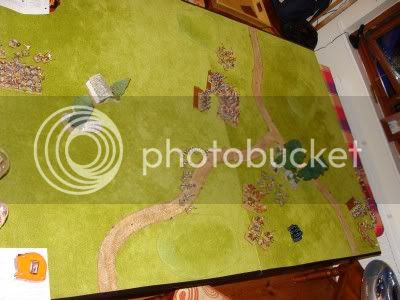 The flanking unit of Auxiliaries finally succumb to the fearsome Celts. The Legionaries make hard work of the larger warband - even when both units engage the Warlord and his retinue - they falter and are routed!

After this it did not take long for the few remaining Romans to be mopped up. The Auxiliary archers did surprisingly well, seeing off the light cavalry and taking out another chariot.

Conclusion
A really fun game! A great reminder of why I love to play toy soldiers. Bothered about losing? Not me ... I play to win, but what really matters is that a fun game is had by all. Winning is a bonus.

Basically, a poorly co-ordinated attack by too few troops spelled disaster for the Legions. The superior numbers of the Celts ensured that they could prevail against better but smaller units of troops. The flanking troops were held off ok but the centre fell apart.

It's certainly given me a lot to think about in terms of army composition, plus it has really inspired me to expand both armies asap! I need more Legion and fewer Auxiliaries. Also, I'm not sure about the viability of a single Scorpio, such weapons to be deployed as a battery or not at all.
Posted by Matt at 12:04 No comments: