As promised here's a few pics (from the very many) and some notes about the historical aspects of our recent holiday to Normandy. As you might expect from a family holiday, the amount of time that could be spent visiting historical sites can be limited so there's still plenty of places to visit another time.

It's not our first visit to Normandy so we have already visited some of the sites like Pegasus Bridge, the British beaches, etc. But they are well worth a second visit.

As with many such sites, particularly the WW2 sites, these places have a feeling or atmosphere (for me at least) that is very hard to put in to words. Standing in the very spot where many famous and brave men and women have stood, seeing some of the landmarks they saw ... well, if you're into military history then I reckon you'll know what I mean. 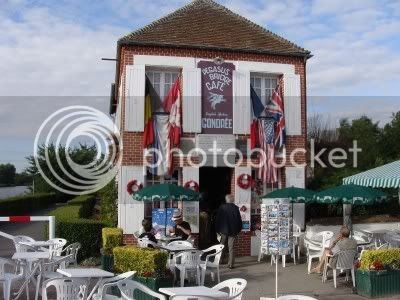 (click for a larger image)
The site of one of the most dramatic episodes of the Normandy campaign, Major Howard's men landing in gliders to make a surprise attack on the river and canal bridges. Today the cafe is also a museum and is run by Mdme Gondree, the daughter of the owner at the time of the Nazi occupation. I believe she was about 4 or 5 when the invasion took place. Great atmosphere, if a bit busy plus excellent coffee and cakes too.
Whilst there we saw the (newer) bridge raised to allow boat traffic to pass, very impressive.
Across the river the sites of the gilder landings are marked by small monuments and it's well worth taking a moment to imagine how exposed the position appears. Very brave fellows indeed.

The nearby museum is very interesting and definitely worth a visit. It now houses the original bridge, complete with bullet and shrapnel damage, along with a re-constructed Horsa glider.

After that we headed for Sword beach, found a great little restaurant then played on the beach for the day. There's pony rides and go-karts too!

Having been to some of the British areas before, we decided to find out more about the American landings. First stop of the day, St Mere Eglise, the site of some of the US airborne landings. 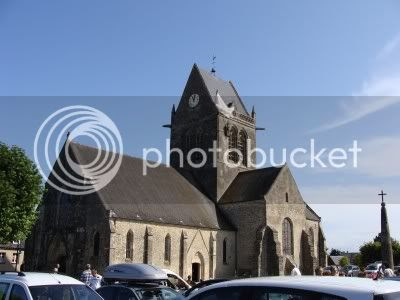 (click for a larger image)
The church has a model of one of the US paras (John Steele) who managed to caught on the steeple. Wounded, he pretended to be dead to avoid being shot by the Germans. 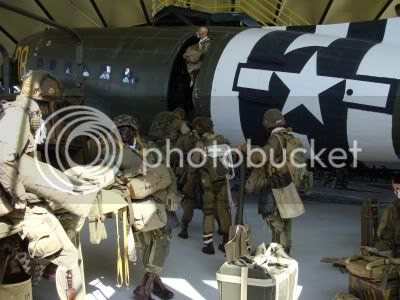 (click for a larger image)
Adjacent to the church is the US Airborne Museum. Very good and packed with detail. Here's a shot of one of the displays. 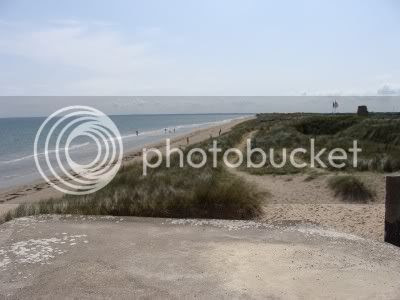 (click for a larger image)
Next was a visit to Utah beach. Very moving to stand amongst the ruined bunkers and think back to the events of June '44. 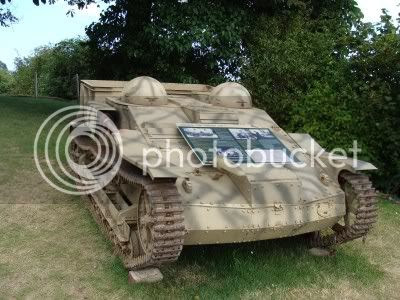 (click for a larger image)
I think the museum here is a relatively new site. Highly recommended as it's full of items from soldiers who took part in the landings, along with the stories associated with them. Such as the damaged helmet of a US para who was shot in the head twice but survived with only minor injuries. When offered a replacement he refused! There's lots of other such artifacts such as actual kit worn by famous soldiers, e.g. Dick Winters from Easy company. (Band of Brothers). Outside are a very small number of exhibits including this French tank. Oddly, the armoured turrets have no comms system so the driver and commander communicate using a series of coloured lights ... who 'designs' these things eh?
However, I found the museum shop slightly disturbing with it's extensive range of Nazi memorabilia, both original and modern re-makes. 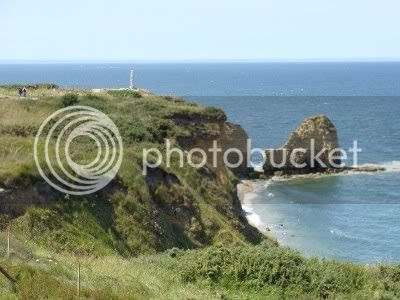 (click for a larger image)
The monument on the Point Du Hoc. How on earth did the US Rangers manage to take and hold this isolated and precipitous spot? The ships may have pounded the cliff top gun emplacements in to rubble but there was still a hard fight that inflicted enormous casualties on both sides. Alas, the rangers found that the guns had been moved in land to avoid being knocked out by the ships. But they did subsequently manage to locate and disable them. Due to coastal erosion the dagger-like monument is off limits but there is a plan to move it further inland. From here it was possible to see the remains of the Mulberry harbour at Arromanches. 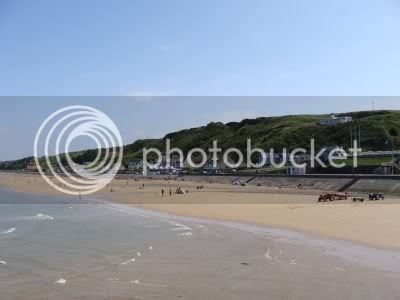 (click for a larger image)
No visit to American sites in Normandy could omit this infamous beach, the last stop on our itinerary for the day. The photo does not truly show just how imposing those cliffs are. But it's good to see the beach being used for more conventional and fun purposes.

A busy day but very interesting.


William the Conquerer's Castle at Falaise 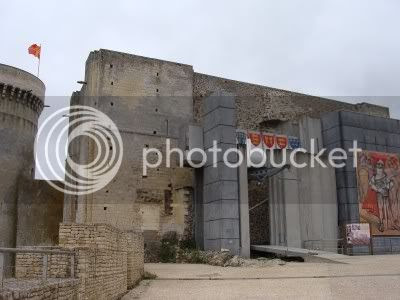 (click for a larger image)
I was really looking forward to this ... and so were my little'uns. However, read on ... the castle is being gradually rebuilt as part of heritage restoration programme, this is generally a Good Thing and the gatehouse will look splendid when complete. As you can see from the pic the keep now has a (rather ugly IMHO) concrete addition. I assumed it was temporary but on closer inspection it's definitely permanent - yeugh! Once inside you get to see some rather sparse 'arty' exhibitions, about chess for example, but no suits of armour, or anything you'd expect to find in a 'normal' castle. In the end we were rather disappointed with the castle especially as we'd driven for about 1.5 hours to get there.

Bayeux Tapestry
No pics of course. Second viewing, and it's awesome. Take your time with the audio guide and really soak up the history. They also do a children's version of the audio guide so they were well pleased too. The museum now has some magnificent displays (10-20mm scale I think) of highly detailed Norman scenes, e.g. castle building, a village, etc. It also runs a short film explaining more about the tapestry and Norman history. Brilliant. Now I want to collect a Norman army for WAB (!?)

If you're visiting Normandy with a young family then I recommend the Frommers guide - not perfect but still very useful for finding out if places will keep little ones happy. I'd also highly recommend the Major and Mrs Holt Guide to Normandy, packed with useful and interesting information.
Posted by Matt at 07:44 No comments:

Yes, I'm still here and I have been rather busy ... honest! Not as busy with a paintbrush as I would like but I have spent a bit of time working on my Celt army. After the buzz and excitement of gaming WW1 at GB's "All Quiet..." event earlier this "summer" I decided that I really ought to get to the point where I have a playable Celt army before I plunge in to yet another era. So that's what I've been doing. The chariots seem to have taken ages to paint (now awaiting dip and final assembly) but that's because in recent weeks I've only managed 1 or 2 evenings of painting. There always seems to be something more urgent that requires attention - how some of the more prolific painters out there manage it I just do not know. There's still about 30-40 figures to base properly, plus all the shield transfers. But at least all the painting is done. I'll blog some photos when the horde is assembled.

In fact I've been so busy that I haven't even managed to blog the Normandy report I promised way back! To be fair I took 800+ photos on hols so they'll need quite a bit of sorting out. But I will sort it out.

Added to that, I'd like to blog some photos of my scenery collection. Having recently re-organised my garage (a.k.a. my gaming gear store) I found several boxes of buildings that haven't seen the light of day for far too long.

Finally, I really must get around to going along to my nearest gaming club, Mid-Somerset Wargamers. We moved to the South West more than a year ago so it's high time I found myself some more local gaming buddies.

Do please keep checking back occasionally, as I find it quite motivating to see that plenty of people visit the wargames table.